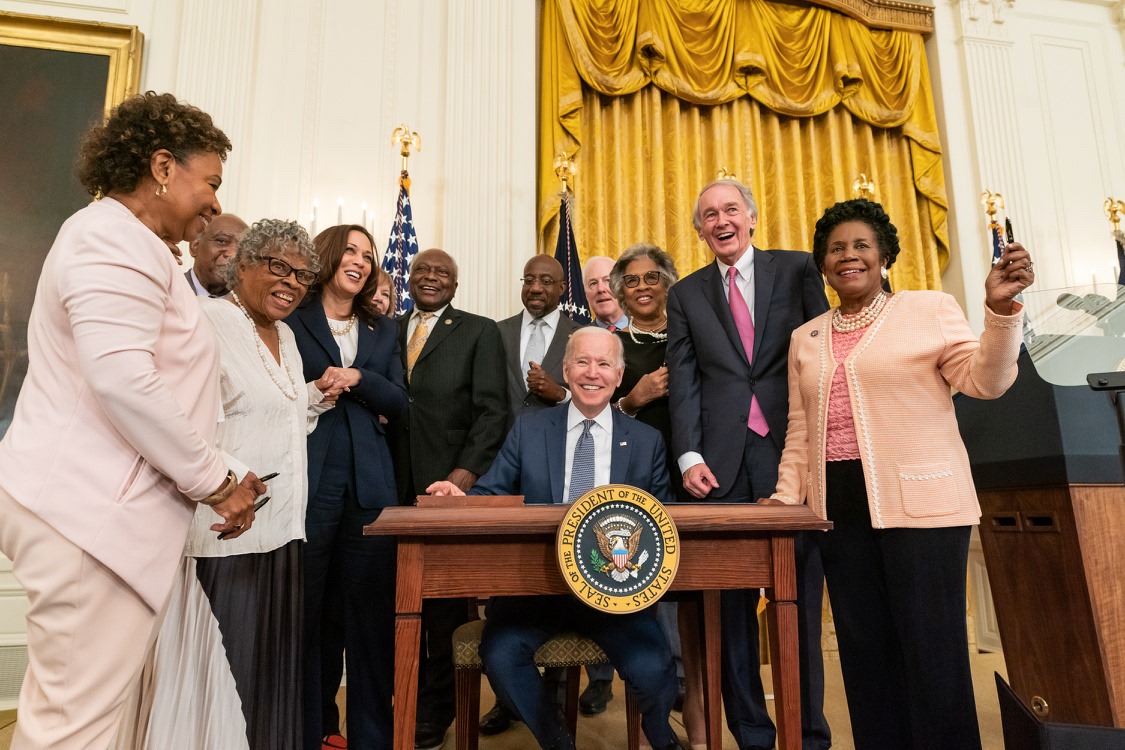 President Biden signed into law a bill creating a federal holiday to commemorate Juneteenth, the day marking the end of slavery in Texas, the Washington Post reports. Because June 19 falls on a Saturday this year, most federal employees will get today off.

“Congress on Wednesday voted overwhelmingly to establish Juneteenth as a federal holiday, elevating the day marking the end of slavery in Texas to a national commemoration of emancipation amid a larger reckoning about America’s turbulent history with racism,” the Washington Post reports.

“It is the first new federal holiday created by Congress since 1983, when lawmakers voted to establish Martin Luther King Jr. Day after a 15-year fight to commemorate the assassinated civil rights leader.”

The Hill: 14 Republicans vote against making Juneteenth a federal holiday.

Playbook: “As he returns from Europe, President Joe Biden faces a major decision that will have consequences for the rest of his agenda: Does he take the deal and hope the rest of his agenda can pass on reconciliation without assurances from Sinema and Manchin? Or does he move on and go for one big Democrats-only proposal?”

“Biden’s senior aides still consider a deal doable, though very hard, and they know it will be declared dead and then resurrected many more times before this is over.”

“Senate Democrats are weighing spending as much as $6 trillion on their own infrastructure package if the chamber’s bipartisan talks fail,” Politico reports.

“Ten Republican senators support a bipartisan infrastructure framework, enough for a potential bill to get through the chamber if all skeptical Democrats back it,” CNBC reports.

“In a statement Wednesday, 20 Democratic and GOP senators endorsed the roughly $1 trillion proposal, which would not raise taxes on corporations or wealthy individuals. The plan would revamp transportation, broadband and water, but would not meet many Democrats’ goals for investments in clean energy and social programs.”

Punchbowl News: “There’s a pretty compelling reason to not take the smaller bipartisan bill, and it’s this: If Congress jams everything from Biden’s American Jobs Plan and American Families Plan into one massive, multi-trillion dollar reconciliation package, then lawmakers only have to take one vote. If Biden takes the bipartisan deal, they’ll have to take at least two votes. One vote is easier than two — always. Plus, the bigger the package, the harder it is to hate — theoretically.”

Also: “Don’t be cute. In order to pass a bipartisan infrastructure bill, Biden will have to corral Democrats to simultaneously support a separate reconciliation package filled with more controversial spending provisions for social programs. Don’t you realize how hard that’s going to be? It’s a bank shot — at best. Typically when legislating seems a bit too complex to pull off, it is.”

The biggest reason is that time is short. Passing one bill as soon as possible will take far less time than trying to pass another one.

Punchbowl News: “Biden should take it because he has a lot of stuff to get done. And the most efficient and best way to get the most stuff done is to get some stuff done all the time, so you have less stuff to do. Make sense? There’s a deal on the table, or at least the outlines for a deal. Support the process. If it comes together and makes sense fiscally — and Republicans can deliver a big block of Senate votes, at least 25 to 30 — ask your party to swallow it and move on. Victory is at hand.”

Also: “Anytime anyone offers you $1 trillion, just take it. Seriously. Biden lived through the Obama era, when Hill Republicans were looking to cut money each week… Republicans want to give you $1 trillion with no tax increases and no deficit spending. Take the deal.”

The biggest reason is that good policy is always good politics. This legislation would provide money to solve real problems.

The Supreme Court upheld the Affordable Care Act for the third time, saying Texas and the individual plaintiffs challenging it can’t prove they were harmed by the individual mandate’s zero penalty, the Washington Post reports.

The decision was 7 to 2, with Justice Stephen Breyer writing for the majority and Justices Samuel Alito and Neil Gorsuch dissenting.

It’s interesting that Breyer wrote for the majority. Perhaps to let him retire on a high note?

Dan Pfeiffer: “It’s easy to get caught up in the calendar implications of McConnell’s statement. It’s understandable to panic about the fact that Justice Stephen Breyer seems so naive about the state of American politics yet is likely to stay on the court past the 2022 election.”

“But we should be crystal clear that McConnell is elucidating an entirely new principle — a Republican Senate will never confirm a Democratic president’s nominee to the Supreme Court. It doesn’t matter when the vacancy occurs or who the president nominates to fill it. If a Republican can prevent that appointment, it is their duty to do so. The blocking of Garland is not the exception; it’s the rule.”

A deep dive from the Washington Post: “New documents and emails reveal how far the president and his supporters were willing to go to try to keep Donald Trump in office in a frenzied three-week stretch that tested Justice Department leaders.”

In case you missed it, watch the solo press conferences by President Joe Biden and Russian President Vladimir Putin after they met for more than three hours today in Geneva.

NBC News has some key takeaways from the summit.

It’s also worth re-watching the Trump-Putin joint press conference in Helsinki in 2018. It’s actually worse than you remember.

In an interview on Russian television, President Vladimir Putin disputed the narrative used by some Republicans questioning President Joe Biden’s mental health saying it had “nothing to do with reality.”

Said Putin: “He had no jet lag, was cheerful, we spoke eye to eye two-plus hours. He’s completely of sound mind and should be taken seriously.”

“Senate Majority Leader Chuck Schumer announced his support on Wednesday for repealing the 2002 war authorization for Iraq, vowing to hold a vote on scrapping the outdated measure later this year,” Politico reports.

The House voted 268 to 161 to repeal the 2002 Authorization for the Use of Military Force in Iraq, almost two decades after the resolution was first passed by Congress, Axios reports.

“Garland, who served as a federal judge for two decades, has worked to reassure Democrats that he’s taking the issue seriously and pledged to support an independent inspector general’s investigation into the matter. But Democrats are quickly growing impatient and already taking matters into their own hands — opening a formal probe this week to determine who was responsible and hold them accountable.”

“Attorney General Merrick Garland on Wednesday reversed a Trump-era immigration ruling that made it all but impossible for people to seek asylum in the United States over credible fears of domestic abuse or gang violence, marking one of the Justice Department’s most significant breaks with the previous administration,” the New York Times reports.

“Attorneys general can overturn decisions made by immigration judges because immigration courts are housed under the Justice Department, not the judicial branch.”

“The Justice Department has closed its criminal investigation into whether a disparaging memoir by President Donald Trump’s national security adviser John Bolton illegally disclosed classified information and dropped its lawsuit aimed at recouping profits from the book,” the New York Times reports.

“Fanone was beaten unconscious after he voluntarily rushed to the Capitol to help defend it from those who breached the building. He suffered a concussion and a mild heart attack.”

“Voting legislation requires 60 votes to pass in the Senate. Without Republican support, it is unlikely to pass.”

Stacey Abrams told CNN she was in favor of Sen. Joe Manchin’s (D-WV) proposed compromise on voting rights legislation.  Said Abrams: “Those provisions that he’s setting forth are strong ones that will create a level playing field and will create standards that do not vary from state-to-state.”

“Colorado Gov. Jared Polis (D) signed into law a public health care option, making it the third state in the US to approve the creation of a government-run health insurance plan to be sold alongside commercial coverage on the Affordable Care Act’s insurance marketplaces,” Vox reports.

“As these states have drawn up their plans, one thing has become clear: The potential value of a public option is in keeping health care costs in check by keeping rates lower than those of private insurance plans. But it still remains to be seen whether a public option can expand health coverage to more people.”

“The number of Americans applying for unemployment benefits rose last week for the first time since April despite widespread evidence that the economy and the job market are rebounding steadily from the pandemic recession,” the AP reports.  “The Labor Department said jobless claims rose 37,000 from the week before.“

“More than 4 million people say they fear being evicted or foreclosed upon in the coming months just as two studies released Wednesday have found that the nation’s housing availability and affordability crisis is expected to worsen significantly following the pandemic,” the Los Angeles Times reports.

“The studies come as a federal eviction moratorium is set to expire at the end of the month.”

Wall Street Journal: “More U.S. workers are quitting their jobs than at any time in at least two decades, signaling optimism among many professionals while also adding to the struggle companies face trying to keep up with the economic recovery.

“The wave of resignations marks a sharp turn from the darkest days of the pandemic, when workers craved job security while weathering a national health and economic crisis.”

“Texans can carry handguns without a license or training starting Sept. 1, after Gov. Greg Abbott on Wednesday signed the permitless carry bill into law,” the Texas Tribune reports.

Abbott also announced some new details of his plan for Texas to build its own border wall, starting with the hiring process for a program manager and providing $250 million in state funds as a “down payment,” the Texas Tribune reports.

“Federal Reserve officials signaled they expect to raise interest rates by late 2023, sooner than they anticipated in March, as the economy recovers rapidly from the effects of the pandemic and inflation heats up,” the Wall Street Journal reports.

CNBC: “Though the Fed raised its headline inflation expectation to 3.4%, a full percentage point higher than the March projection, the post-meeting statement continued to say that inflation pressures are ‘transitory.’”