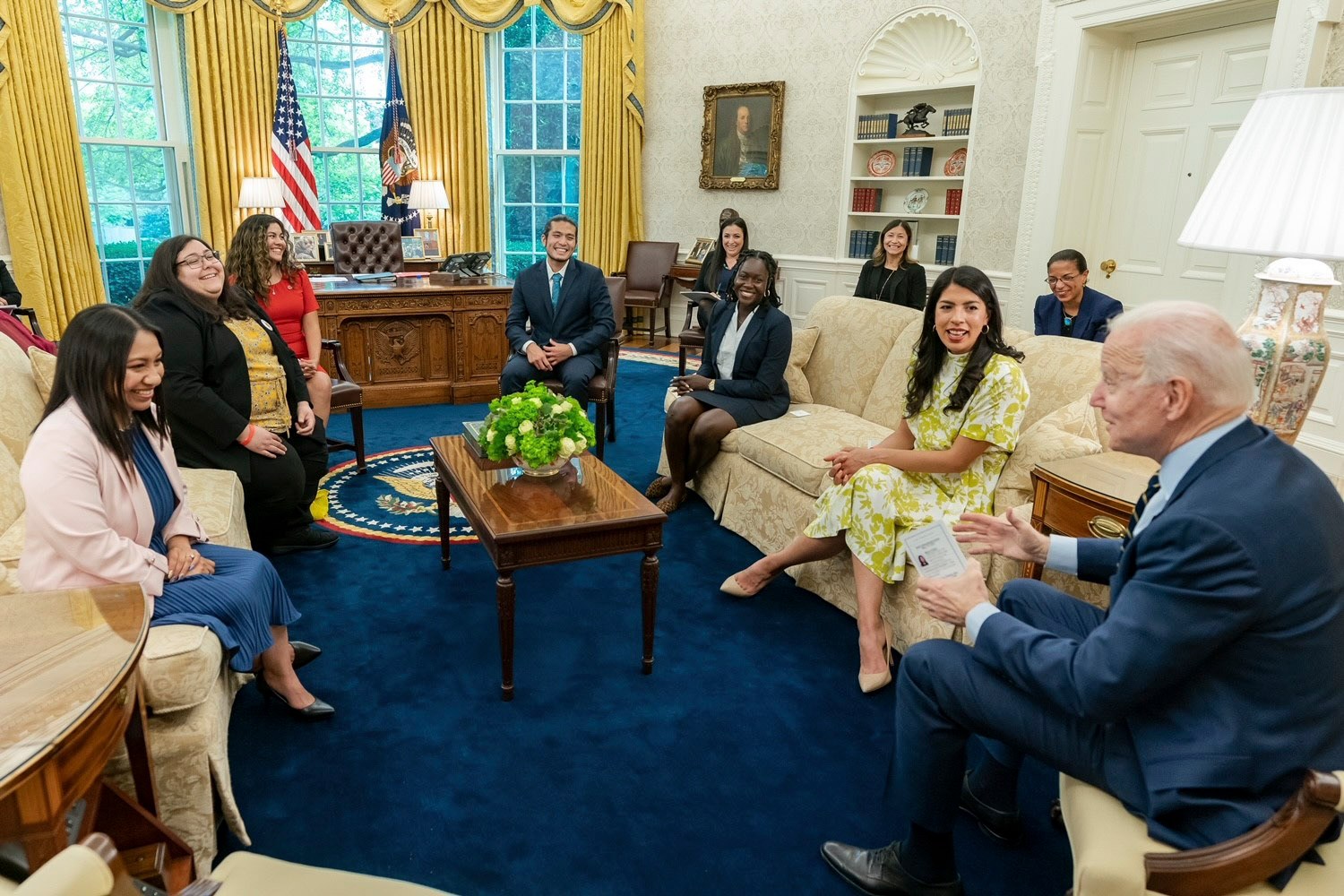 A new Politico/Morning Consult poll finds a 51% of Republicans think “audits” of the 2020 presidential election will change its outcome, including 29% who “definitely” think it will change the outcome and 22% who think it “probably” will change the results.

Gallup: “Continuing a long-term trend, Americans are discouraged about the state of moral values in the U.S., with 84% calling them ‘only fair’ or ‘poor’ and two-thirds believing they are getting worse rather than better. These negative evaluations differ little from what Gallup has found each year since it began measuring perceptions of the nation’s values in 2002.”

“This stability, however, masks significant changes in Democrats’ and Republicans’ perceptions of U.S. values between 2020 and 2021. Democrats are much less negative about moral values today than they were a year ago. Conversely, Republicans’ views of U.S. moral values have sunk to record lows.”

GEORGIA U.S. SENATOR — Former Sen. Kelly Loeffler (R-GA) told CNN after meeting with Sen. Mitch McConnell (R-KY) that she is keeping the option open of challenging Sen. Raphael Warnock (D-GA) next year.  Said Loeffler: “I haven’t ruled it out.” Asked why she met with McConnell: “I’m updating the leader on the situation in Georgia.”

CALIFORNIA GOVERNOR — California Secretary of State Shirley Weber (D) has set the requirements for candidates to appear on the ballot for the recall election of Gov. Gavin Newsom (D).  The requirements are 65 signatures, a $4,195 filing fee, and 5 years of tax returns.

ALASKA U.S. SENATOR — Henry Olson: “Alaska has eliminated party primaries entirely. Instead, all candidates from all parties will appear together on one primary ballot, and the top four candidates regardless of party advance to the general election.”

“This system opens the way for 2020 candidate Al Gross, or another strong Democrat, to win even if Tshibaka gets a plurality on the first count. Both the 2016 election results and polling show that Murkowski’s support overlaps with voters who would normally vote Democratic.”

VIRGINIA GOVERNOR — “Glenn Youngkin was for Terry McAuliffe’s economy before he was against it,” Insider reports. “It’s an uncomfortable bit of reality for Youngkin, now the GOP nominee for Virginia governor who as CEO of the global investment firm The Carlyle Group routinely praised the state’s economic progress while McAuliffe was its chief executive.”

MISSOURI U.S. SENATOR — Kansas City Star: “In a worst-case scenario for Greitens’ opponents, a large primary field without a strong anti-Greitens alternative could fracture the vote and allow the former governor to win with only 20%. Missouri Republicans would be left with a nominee loathed by a significant portion of the party as control of the Senate hangs in the balance.”

“Greitens has gone to great lengths to signal he is a candidate in the Trump mold. He’s maintained a near-constant presence on right-wing, pro-Trump media, including hosting a show on the America’s Voice TV network and announcing his candidacy on Fox News.”

NEW YORK CITY MAYOR — Marist College, working on behalf of Politico, Telemundo 47, and WNBC, is out with its first poll of next week’s instant runoff Democratic primary

Data for Progress has released a survey of next week’s instant runoff Democratic primary:

Yang is hoping to regain his footing, though, with a new spot that labels Adams “a conservative Republican.” This commercial, just like a recent negative ad from Yang’s allies at Future Forward PAC, does not mention any of the other mayoral candidates.

IOWA GOVERNOR / U.S. SENATOR — State Rep. Ras Smith kicked off a bid for Iowa’s governorship on Tuesday, giving Democrats their first notable candidate in next year’s race against Republican Gov. Kim Reynolds. Smith, who at 33 is the youngest of the state’s six Black lawmakers, has been a vocal advocate for racial justice and spearheaded a bill to bring greater accountability to the police that passed the legislature unanimously last year in the wake of George Floyd’s murder.

Smith had also weighed a run for the Senate but always sounded more likely to seek state office, saying in April that “it’s hard to see myself living anywhere where I can’t throw my dog in the back of the truck, my shotgun and a box of shells and drive 20 minutes in any direction and do some pheasant hunting or some turkey hunting.”

A number of other prominent Democrats are also still considering the governor’s race, though, including Rep. Cindy Axne, 2018 secretary of state nominee Deidre DeJear, and state Auditor Rob Sand. Reynolds, meanwhile, hasn’t officially kicked off her re-election campaign, but earlier this month she said she would “make a formal announcement later.”

MANHATTAN DISTRICT ATTORNEY — Data for Progress has released a survey of next week’s rarely-polled Democratic primary that shows two former prosecutors, Alvin Bragg and Tali Farhadian Weinstein, deadlocked at 26% apiece; a third ex-prosecutor, Lucy Lang, is a distant third with 8%.

DFP is using this data to explicitly argue that progressives “have an obligation to consolidate” behind Bragg, calling him “the only progressive positioned to beat Farhadian Weinstein.” The winner of the primary—where only a plurality is necessary—should have no trouble prevailing in the general election to succeed retiring incumbent Cyrus Vance as head of what’s arguably the most prominent local prosecutor’s office in America.

All of the contenders except for Liz Crotty, a self-described centrist who takes just 5% in this poll, have pitched themselves as progressives who will bring much-needed changes to the post, though the three contenders who have never been prosecutors—attorney Tahanie Aboushi, public defender Eliza Orlins, and Assemblyman Dan Quart—have portrayed themselves as the most aggressive reformers. Bragg, Farhadian Weinstein, Lang, and yet another former prosecutor, Diana Florence, have all, in the words of the New York Times’ Jonah Bromwich, “pitched themselves as occupying a middle ground, focused on less sweeping changes.”

There are some notable differences, though, between Bragg and Farhadian Weinstein, who have been the top fundraisers in this contest. Ideologically, Bragg has generally staked out territory to the left of Farhadian Weinstein (who only registered as a Democrat in 2017), including on issues like the decriminalization of sex work and the imposition of long sentences.

And while Bragg, who previously worked as the chief deputy state attorney general, has bragged about suing Donald Trump “more than a hundred times,” the Times reported earlier this month that Farhadian Weinstein met with Trump administration officials in 2017 about a potential judicial appointment. The paper, citing an unnamed source, writes that the discussion “became heated during a disagreement over constitutional law” and did not advance further.

Farhadian Weinstein’s detractors have also taken issue with her connection to the financial industry. The Wall Street Journal reported that more than half of the candidate’s fundraising from earlier this year “came from four dozen donors, many of whom work in the financial sector.” Farhadian Weinstein, who is married to wealthy hedge fund manager Boaz Weinstein, also recently self-funded $8.2 million for her campaign, an amount that utterly dwarfs what everyone else has raised or spent combined.

Though Bragg doesn’t have the resources of Farhadian Weinstein, he does have some important backers, including three of the city’s most politically influential unions, as well as the endorsement of the Times, which often carries uncommon weight in local races.

As Bromwich has noted, every contender save Quart would achieve a historic first should they prevail. Six of the candidates would be the first woman to win this office, while Aboushi would additionally be the first Muslim or Arab American to hold the post. Bragg, meanwhile, would be Manhattan’s first Black district attorney.

TEXAS 6TH CD — Ted Cruz has endorsed conservative activist Susan Wright in the all-Republican special election runoff for Texas’ 6th Congressional District that’ll take place on July 27. Prior to the first round of voting on May 1, Cruz had attacked Wright’s opponent, state Rep. Jake Ellzey, for his “financial support from never-Trumpers, openness to amnesty, and opposition to school choice.”

ARIZONA SECRETARY OF STATE — Secretary of State Katie Hobbs announced earlier this month that she’d run for governor rather than seek a second term as Arizona’s chief elections administrator, and one familiar fellow Democrat sounds likely to get in the race to succeed her. Former Maricopa County Recorder Adrian Fontes put out a video Friday where he told viewers he was “getting ready to run for Arizona secretary of state,” though he stopped short of announcing anything. Fontes may soon have company in the primary, as local NBC reporter Brahm Resnik says that state House Minority Leader Reginald Bolding “is expected” to run.

Fontes won the 2016 race to administer elections in Maricopa County, which is home to more than 60% of the state’s population and whose 4.5 million residents make it the fourth-largest county nationally. However, Republican members of the county Board of Supervisors took control of key powers from Fontes’ office following his victory, and Team Red targeted him four years later. Fontes ultimately lost re-election by a very close 50.1-49.9 margin to Republican Stephen Richer as Joe Biden was carrying Maricopa County 50-48.

While Fontes hasn’t yet announced, State House Minority Leader Reginald Bolding has. Bolding has drawn attention as a vocal critic of voting restrictions that Arizona Republicans have sought to pass in the wake of Joe Biden’s victory in November, which marked the first time that a Democrat had carried the state’s electoral votes since 1996.

Bolding’s activism has gotten under the skin of his GOP colleagues: As he delivered a fiery denunciation of a bill to end the permanence of Arizona’s popular Permanent Early Voting List in April, Republican state Rep. Travis Grantham interrupted him to demand, “I think he should be sat down and he shouldn’t be allowed to speak.” Grantham also complained that Bolding had cast aspersions on his character “with regards to colored people.”

Bolding would be the first Black official elected statewide in Arizona, and he’d also be the first person of color to serve as the state’s top elections official. He’s hoping to succeed incumbent Katie Hobbs, who recently announced a bid for governor, though he could be joined in the primary by former Maricopa County Recorder Adrian Fontes, who has expressed interest in a bid. Two vigorous voter suppression advocates are already seeking the Republican nod, state Sen. Michelle Ugenti-Rita and state Rep. Mark Finchem.

The GOP side already consists of two state legislators who have been loud advocates of voter suppression: state Sen. Michelle Ugenti-Rita, who has sponsored some of the most aggressive new voting restrictions in Arizona, and state Rep. Mark Finchem, who led the push to have the legislature reject Arizona’s popular vote and instead appoint a slate of electors who would back Donald Trump.

NEW MEXICO GOVERNOR — Retired Army National Guard Brig. Gen. Greg Zanetti has launched a bid against Democratic Gov. Michelle Lujan Grisham, making him the second notable Republican in the race. Zanetti unsuccessfully sought his party’s nod for lieutenant governor all the way back in 1994, then ran an abortive campaign for governor in 2009, dropping out after just a few months. He’s also served as Bernalillo County GOP chair twice and, in his day job as an investment advisor, has regularly appeared on local radio to offer financial advice.

Already in the race for Republicans is Sandoval County Commissioner Jay Brock, though several other notable candidates are still considering, including state GOP chair (and former Rep.) Steve Pearce.