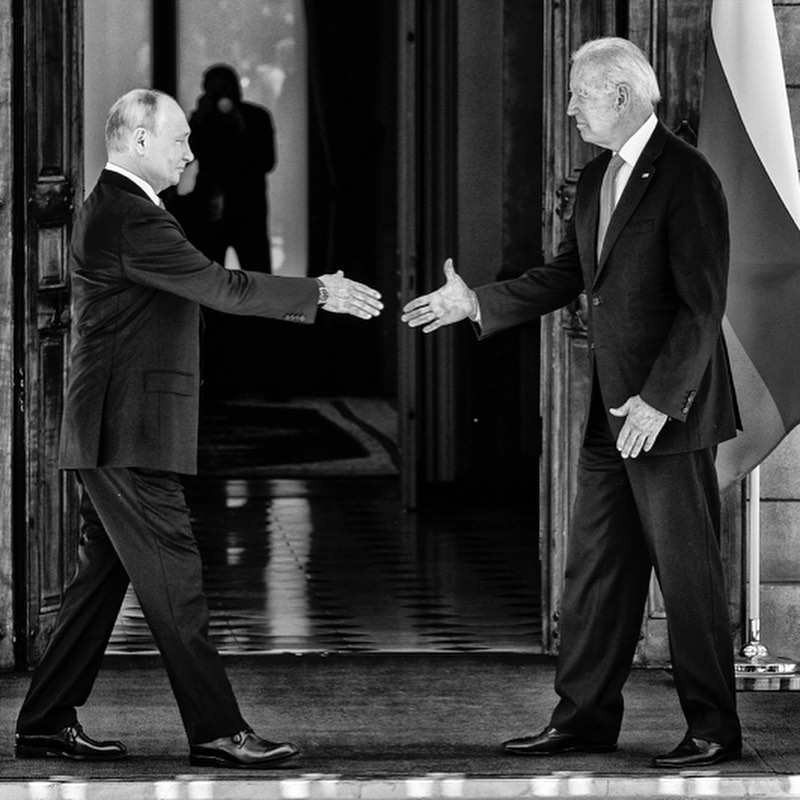 Said Putin at a press conference: “This is a very experienced politician. We had tête-à-tête for almost two hours. That’s not something you do in such a detailed way with many politicians… His predecessor had a different view. This one decided to act differently and his reply was different from Trump’s.”

“President Joe Biden said he warned Russian President Vladimir Putin Wednesday of consequences if jailed Russian opposition leader Alexey Navalny were to die in prison,” CNN reports. Said Biden: “I made it clear to him that I believe the consequences of that would be devastating for Russia.”

NBC News: What does Putin want from the Biden summit?

“For 70 years, meetings between American presidents and Soviet or Russian leaders were dominated by one looming threat: the vast nuclear arsenals that the two nations started amassing in the 1940s, as instruments of intimidation and, if deterrence failed, mutual annihilation,” the New York Times reports.

“Now, as President Biden prepares to meet with President Vladimir Putin here in Geneva on Wednesday, for the first time cyberweapons are being elevated to the top of the agenda.”

Axios: What to expect from the summit when you’re not expecting much.

“Five months after the January 6 insurrection, the House and Senate have come to an agreement that will award the Congressional Gold Medal to the officers who defended the Capitol,” CNN reports. “But 21 House Republicans refused to support the legislation, the latest reminder that members of Congress still cannot agree on the facts of the deadly Capitol Hill riot.”

Rep. Paul Gosar (R-AZ), at House hearing, said that a Capitol police officer was “lying in wait” for Ashli Babbitt before shooting her as she tried to break into the House chamber during the January 6 riots at the Capitol, Politico reports.

Gosar said that Babbitt was “executed” by police and demanded the name of the officer involved in shooting.

Rep. Liz Cheney responded on Twitter: “On January 6, as the violent mob advanced on the House chamber, I was standing near Rep. Paul Gosar and helped him open his gas mask. The Capitol Police led us to safety. It is disgusting and despicable to see Gosar lie about that day and smear the men and women who defended us.”

“Joe Manchin, in a private call on Monday with a group of major donors, provided a revealing look at his political approach to the most thorny issues confronting lawmakers,” The Intercept reports. “When it came to Sen. Roy Blunt, a moderate Missouri Republican who voted no on the Jan. 6 commission, Manchin offered a creative solution.”

Said Manchin: “Roy is retiring. If some of you all who might be working with Roy in his next life could tell him, that’d be nice and it’d help our country. That would be very good to get him to change his vote.”

The FBI is pursuing potentially hundreds more suspects in the Capitol riot, the agency’s director told Congress, calling the effort to find those responsible for the deadly assault “one of the most far-reaching and extensive” investigations in the bureau’s history, the New York Times reports.

Said FBI Director Christopher Wray: “We’ve already arrested close to 500, and we have hundreds of investigations that are still ongoing beyond those 500.”

Punchbowl News: “It seems safe to say the only way this bipartisan deal happens is if they move another bill at the same time that includes most or all of the party’s progressive agenda.”

“But in that case, would it be more difficult for Republicans to support the bipartisan package? If Pelosi loses Democrats, will she pick up enough Republicans to offset that? Or the Democrats can just drop the bipartisan stuff and pass an infrastructure bill in a reconciliation package with whatever else they want to include. This is all really complicated.”

“Sen. Joe Manchin (D-WV) opened the door to a compromise on voting legislation Wednesday with a memo outlining provisions of federal voting and campaign finance legislation that he would support,” NBC News reports.

“He also proposes requiring voter identification, but allowing alternatives like utility bills to suffice as proof of identity.”

Playbook: “Schumer needs Manchin to pass Biden’s agenda, and there’s a lot of eye-rolling from senior Democrats across Washington about the way the left has attacked the senator. We’re told he privately scoffs at the notion that progressive activists understand West Virginia politics better than he does.”

“At best the in-your-face tactics might simply strengthen Manchin’s position back home. At worst it could eventually push him to switch parties, something there’s increasing chatter about among top Dems. Manchin did not hit 50% in his last reelection, and Trump won the state by almost 40 points. Politics is nationalized now, and there are few remaining states that vote for different parties for the Senate and presidency, making Manchin an extreme outlier.”

“Democrats whose memory of politics stretches beyond the rise of Trump have been reminding us that in 2001, Sen. Jim Jeffords (I-VT), who was relentlessly attacked by conservatives, left the Republican Party and threw the 50-50 Republican-controlled Senate to the Democrats.”

Politico: “Almost five months after leaving office, major publishing houses still are wary of publishing a book by Trump, even though a post-White House memoir would almost assuredly be a best-seller. Their reluctance is driven by several factors, though the underlying fear is that whatever Trump would write wouldn’t be truthful.”

“It’s unheard of for a former U.S. president to struggle to score a major book deal after leaving office. And the absence of Trump’s own words from the literary world is made even more pronounced by the fact that several of his top aides and former Cabinet officials are writing books of their own.”

Wall Street Journal: “The company’s launch comes as some conservatives allege that much of the nation’s news media, publishers and mainstream social-media platforms are biased against them. They are looking to set up alternatives that they say better support free speech…”

“All Seasons Press expects to release four books this fall, including works by Mark Meadows, the former Trump administration chief of staff; former White House trade adviser Peter Navarro ; and James Golden, who worked as a producer for years with the late conservative radio host Rush Limbaugh. The publisher said it is targeting 10 new titles in 2022.”

Meadows also has a new book coming out this fall with Rep. Jim Jordan (R-OH).

First, Tucker Carlson floated a new conspiracy theory that the FBI may have orchestrated the insurrection at the U.S. Capitol on January 6: “Some of the key people who participated on January 6th have not been charged. Look at the documents, the government calls those people unindicted co-conspirators. What does that mean? Well, it means that potentially every single case they were FBI operatives.”

Second, Liz Harrington — on her first day as Donald Trump’s chief spokesperson — claimed the riots were just a “peaceful protest”: “You had January 6, they opened the door to the capitol… it’s not an easy building to get into… They opened the door and people walked through… Some people just walked in. And now they are being kept for misdemeanors in some political jail? What is happening here?”

Twenty years ago, conspiracy theorists wildly claimed the 9/11 terrorist attacks were an inside job. They were mostly dismissed as nuts and their statements were ignored by the media. Now the people making similar ludicrous claims about January 6 are the most popular Fox News host and the chief spokesperson for the former president.

Peter Nicholas: “But even if Republicans capture the House and Trump agrees to take the role, there is no guarantee he’d win a leadership vote. Every Democrat would vote against him, as would a few anti-Trump Republicans.”

“Nor is it a lock that Representative Kevin McCarthy, the House Republican leader, would willingly step aside for Trump to sweep in and take a job for which the Californian has spent years auditioning.”

“Bannon unspooled a wild chain of events to me, to explain away that hurdle: Trump would serve only 100 days, setting in motion the Republican policy agenda and starting a series of investigations, including an impeachment inquiry into Biden. Then, Trump would step down, turn the gavel over to McCarthy, and prepare for a 2024 presidential run.”

Florida Gov. Ron DeSantis (R) “cloaked himself in religion Monday while signing a bill into law that would require public schools in his state to set aside at least one minute of silence for children to meditate or pray,” the AP reports.

“So, the critical race theory — and I can’t think of the author right off the top of my head who wrote about this — really had a theory that, at the high level, is one that really starts creating those divisions between us about defining who we are based on race and that sort of thing and really not about how to bring us together as Americans rather than — and dividing us and also having a lot of very socialist-type ideas about how that would be implemented in our state.”  — Nebraska Gov. Pete Ricketts (R), when asked to define “critical race theory” on his monthly call-in radio show.

“Donald Trump will tour the state’s border with Mexico later this month, after accepting an invitation from Texas Gov. Greg Abbott to investigate what Trump termed an ‘unmitigated disaster zone,’” the Dallas Morning News reports.

“The trip, on June 30, is an apparent response to Vice President Kamala Harris not visiting the U.S.-Mexico border amid ongoing tensions over how to address an influx of migrants.”

“The Manhattan district attorney’s office appears to have entered the final stages of a criminal tax investigation into Donald Trump’s long-serving chief financial officer, Allen Weisselberg, setting up the possibility he could face charges this summer,” the New York Times reports.

“In recent weeks, a grand jury has been hearing evidence about Mr. Weisselberg, who is facing intense scrutiny from prosecutors as they seek his cooperation with a broader investigation into Mr. Trump and the Trump Organization.”

“The governors of New York and California, the states hit earliest and hardest by the pandemic, triumphantly announced on Tuesday that they had lifted virtually all coronavirus restrictions on businesses and social gatherings as both states hit milestones in vaccinating their residents,” the New York Times reports.

“In New York, where 70 percent of adults have received at least one dose of the vaccine, the order from Gov. Andrew M. Cuomo means that restaurants will no longer be forced to space tables six feet apart; movie theaters will be allowed to pack their auditoriums without spacing seats apart; and entering commercial buildings won’t require a temperature check.”

British Prime Minister Boris Johnson slammed his own health minister as “totally fucking hopeless” for his failed response to the coronavirus pandemic just minutes before finding out that he himself had been infected, former adviser Dominic Cummings writes.

Tom Friedman: “Dealing effectively with Iran’s Islamic regime — in a way that permanently eliminates its malign behavior — is impossible. Iran is too big to invade; the regime is too ensconced to be toppled from the outside; its darkest impulses, to dominate its Sunni Arab neighbors and destroy the Jewish state, are too dangerous to ignore; and its people are too talented to be forever denied a nuclear capability.”

“So, when dealing with Iran, you do what you can, where you can, how you can, but with the understanding that (1) perfect is not on the menu and (2) Iran’s Islamic regime is not going to change.”

Associated Press: “European Union negotiators said international talks that resumed Saturday on the Iran nuclear agreement were on track to revive the deal … Senior diplomats from China, Germany, France, Russia, and Britain concluded a 90-minute meeting with Iranian representatives at a hotel in the Austrian capital.”