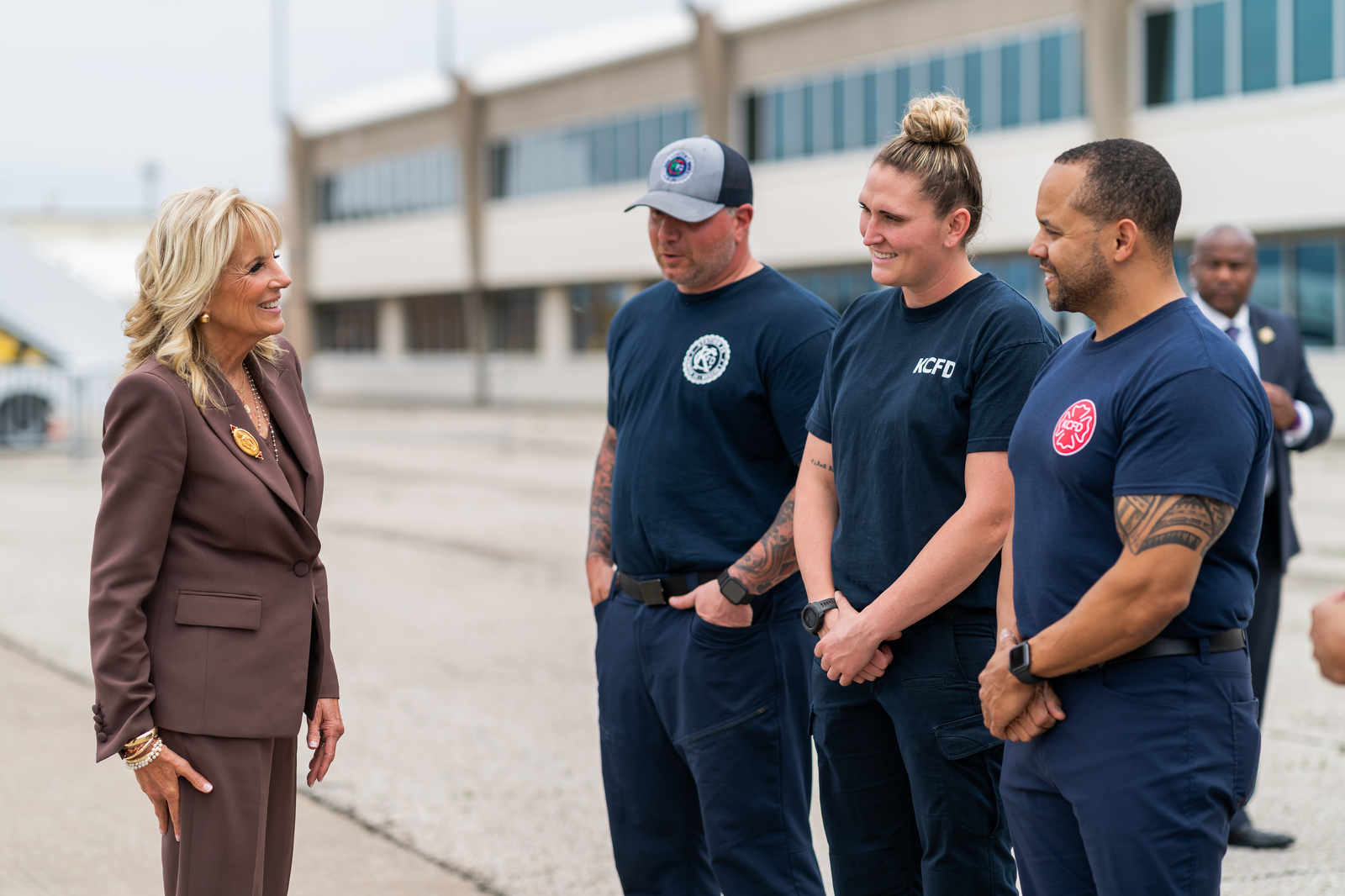 A new ABC News/Ipsos poll finds 52% of Americans have confidence President Biden will represent the U.S. well when making deals with leaders of other countries around the world.

A new JMC Analytics poll in Virginia finds Terry McAuliffe (D) with a 4-point lead over Glenn Youngkin (R), 46% to 42% with 12% still undecided.

A new Gallup poll finds 58% of Americans opposed to overturning the U.S. Supreme Court’s 1973 Roe v. Wade decision, while 32% are in favor.

A new Data for Progress poll shows voters prioritize the economy in general (25%), jobs and unemployment (17%), and the national debt (13%) over fighting inflation (9%).

Greg Sargent: “Democratic strategists are taking steps now to set the terms of the debate in the midterms. To this end, they say they’ve homed in on a key demographic: suburban women who support President Biden but are at risk of either backing Republicans in 2022 or staying at home.”

“This demographic is somewhat distinct from the relatively affluent, educated White suburbanite demographic that is often discussed as central to the suburban shift to Democrats in the 2018 and 2020 elections.”

“Instead, this group is a subset of suburban women who are more likely to be non-college-educated and somewhat less affluent, and tend to be drawn from the working class or lower-middle class, or the ranks of small business owners.”

Senate Minority Leader Mitch McConnell (R-KY) warned that he and his allies are willing to step into Republican Senate primaries to try to prevent a candidate they view as unelectable in November 2022 from advancing, The Hill reports.

Said McConnell: “There’s no question that in order to win… you have to appeal to the general election audience. I’ll be keeping an eye on that. Hopefully we won’t have to intervene, but if we do, we will.”

Wall Street Journal: “Headed into the 2022 midterms, Rep. Chip Roy will be a case study in whether a conservative Republican usually aligned with Mr. Trump can survive politically after angering the former president—even a modest amount. … Mr. Roy’s most high-profile divergences with the former president began after the 2020 election.”

“Mr. Roy’s decisions to split with Mr. Trump haven’t always sat well with his constituents who remain firmly allied with the former president. … Others gave Mr. Roy more room to express his own opinions… One silver lining for Mr. Roy: He doesn’t appear to be near the top of Mr. Trump’s long list of targeted Republicans ahead of next year’s midterms, in large part because he ultimately voted not to impeach the former president.”

Washington Post: “On Jan. 13, Rice shocked Washington and voters here in a district that includes coastal communities that thrive on tourism and rural areas focused on farming: He voted to impeach Trump on charges he incited the deadly Jan. 6 attack on the Capitol.”

“Now that vote threatens to end his career as he faces several potential primary opponents who strongly support the former president. And that race will have a broader meaning for his party, serving as a test case for whether a solidly conservative lawmaker, long popular in his district and loyal to the party, can be cast out by GOP voters for the lone sin of crossing Trump.”

It will be fascinating to see how many of the 10 House Republicans who voted to impeach Trump are still in Congress after the midterms.

“Polling sites across New York welcomed a trickle of voters on the first official day of a historic election — and those who turned out seemed primed for a new style of voting, but overwhelmed with choices,” Politico reports.

Said Walker: “Ah — my first thought — it was that Mark Meadows had orchestrated this whole event…”

“Walker accused Meadows of not telling Trump that Walker led a straw poll of Republican delegates earlier that day for the GOP 2022 Senate nomination.”

Popular Information: “This month, corporations are plastering their social media avatars with rainbows, sponsoring Pride parades, and declaring their unwavering commitment to the LGBTQ community. Many of these companies, however, are spending millions supporting the campaigns of anti-gay politicians at the federal and state level.”

“A Popular Information investigation found that 25 major corporations have spent more than $10 million since 2019 supporting members of Congress with a zero rating on the latest Congressional scorecard produced by the Human Rights Campaign, the most prominent LGBTQ rights organization in the United States. These same corporations have also donated hundreds of thousands of dollars to state legislators who have sponsored anti-trans legislation this year.”

MISSOURI U.S. SENATOR — Kansas City Star: “As Greitens spurns a Republican establishment that has largely turned against him, the other candidates are competing to become the dominant choice of party activists, some of whom fear the former governor, beset by scandal, could put GOP control of the seat in danger.”

“It’s a competition so far centered largely on Trump and the ability to advance what Republicans call his America First agenda… The question of who is the strongest competitor against Greitens is likely to remain unsettled for some time. More candidates are expected to join ahead of the March 2022 filing deadline.”

Politico: “Candidates up and down the ballot are portraying themselves as staunch Trump loyalists, showing off photos they’ve taken with the former president, divulging private conversations they’ve had with him and, in Lynda Blanchard’s case, brandishing Trump-signed nomination papers. But some candidates are taking it too far — and Trump and his team are aggressively letting them know it.”

“The episodes illustrate the colliding pressures confronting the former president and the Republican office-seekers desperate for his support. While candidates are calculating that they need voters to see them as Trump-approved, the former president is protective of his political brand and recognizes that his much-coveted endorsement — and the performance of the candidates who get it — is one of his primary means of maintaining relevance.”

Hayes Brown: “The Facebook that conservatives love to rail against is a fiction, a literary device invented to channel their opprobrium into even as conservatives benefit from the platform’s dominance of internet life.”

“In reality, Facebook is the best thing that ever happened to the conservative movement. Its algorithm effortlessly magnifies and amplifies the exact pitch and tone of fear that the Republican Party has harnessed for decades.”

“The irony is that posts from conservatives accusing Facebook of censorship are more likely to go viral on Facebook than reporting about the platform’s actual overreaches.”

VIRGINIA GOVERNOR — “This year’s competitive gubernatorial race in Virginia will likely come down to answers to these two questions,” First Read reports.

“One, just how potent is Republican nominee Glenn Youngkin’s change message? (‘It’s going to take an outsider, a new kind of leader to bring a new day to Virginia,’ Youngkin says in his heavily played TV ad.)”

“And two, is Trump still a powerful — and galvanizing — issue for Democrats and nominee Terry McAuliffe? (‘Glenn Youngkin is not a reasonable Republican. He is a loyalist to Donald Trump,’ goes a new McAuliffe digital ad.)”

NEW HAMPSHIRE 1ST OR 2ND CD — “A New Hampshire man facing charges for taking part in the Jan. 6 Capitol riot is now hoping to head back to Washington as a member of Congress,” NBC News reports.

“Jason Riddle said he is still working on the details of his campaign for office.”

Riddle doesn’t think his riot case will hurt his campaign. In fact, just the opposite: “In the long run, if you’re running for office, any attention is good attention, so I think it will help me.”

“Kucinich’s long-expected announcement brings arguably the most high-profile name to the already crowded list of candidates looking to succeed four-term Mayor Frank Jackson. The nonpartisan primary is Sept. 14, with the top two finishers squaring off in the Nov. 2 general election.”