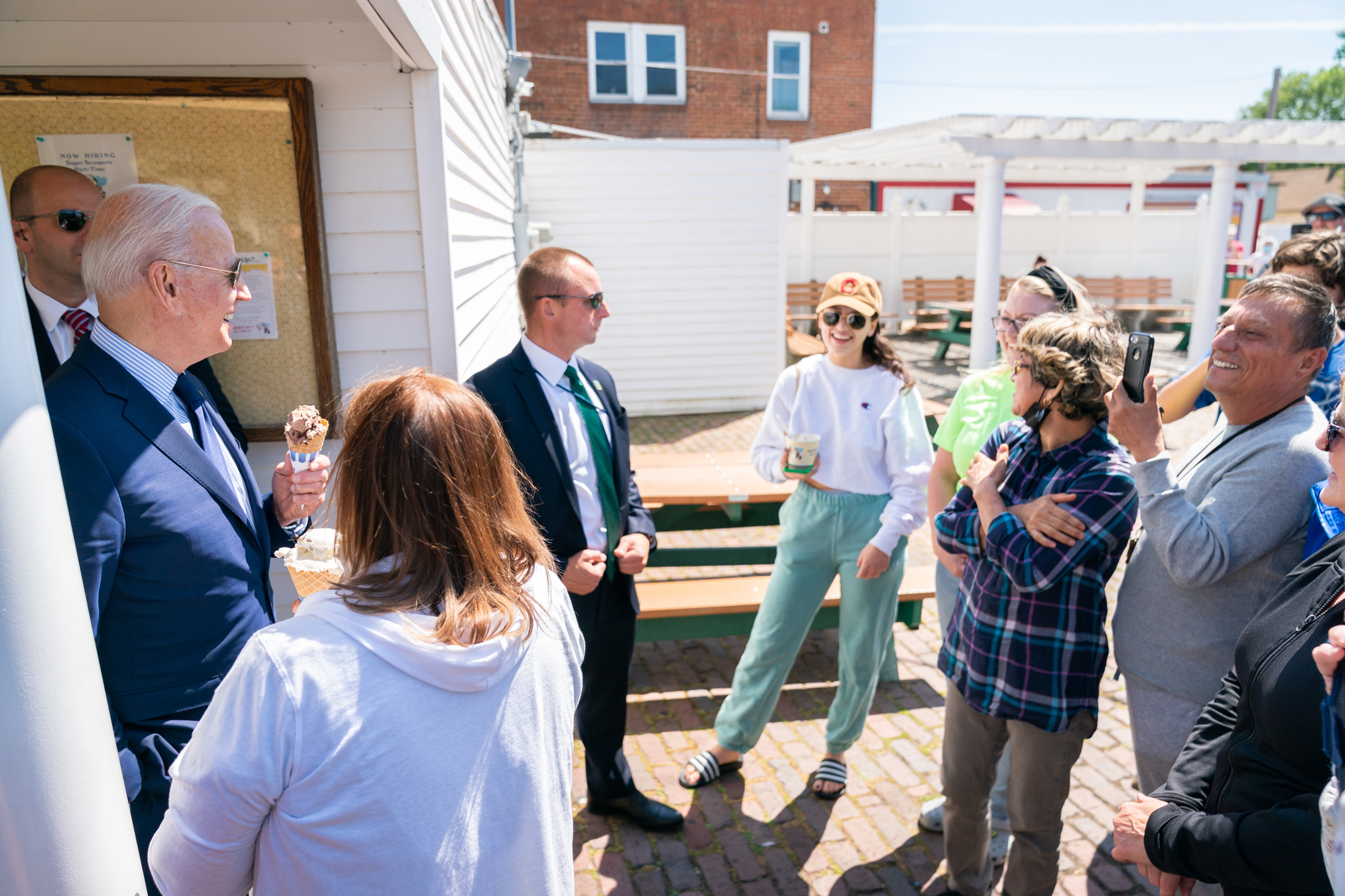 Jonathan Last: “If Trump runs again in 2024—and if you don’t have the odds better than 50-50, you’re high—then I would bet that ‘Save America’ will be his slogan.”

“It’s perfectly in keeping with his brand of grievance. It’s still revanchist—a call to go backwards to a time when the country wasn’t under assault from internal forces. It ups the stakes: 2016 was a choice between Making America Great Again and continuing to be mediocre. ‘Save America’ is a fight for the existence of the nation as a thing.”

“And ‘Save America’ fits perfectly with the view that the 2020 election was stolen and that the current federal government is an illegitimate occupying force.”

“‘Save America’ is the bloody shirt as a wordmark.”

OHIO GOVERNOR — Former Rep. Jim Renacci, who was the GOP’s nominee for Senate in 2018, announced Wednesday that he would challenge Gov. Mike DeWine in next year’s Republican primary.

Renacci has been a loud DeWine critic for some time, but he intensified his attacks last year over the governor’s measures to combat the coronavirus pandemic. The former congressman declared in the fall that the state was “committing economic suicide,” and he went on to trash the governor for considering new restrictions on restaurants and bars as COVID-19 cases were rising.

Renacci tapped into another well of conservative grievances just after the election when he trashed DeWine for recognizing Joe Biden’s victory. The governor’s situation got considerably more serious days later when Donald Trump, who still had a Twitter account, wrote, “Who will be running for Governor of the Great State of Ohio? Will be hotly contested!” However, while Trump has continued to train his venom on two other GOP governors, Arizona’s Doug Ducey and Georgia’s Brian Kemp, he’s largely left DeWine alone of late.

That could change at any time of course, but if Renacci is counting on Trump’s backing, he may be in for a big disappointment: NBC reports that Trump is unlikely to endorse him thanks to his underwhelming 2018 Senate campaign. Indeed, Renacci’s defeat at the hands of Democratic Sen. Sherrod Brown that year makes him the one Republican to lose a partisan election in Ohio over the last four cycles (Democrats have prevailed in officially nonpartisan races for the state Supreme Court).

That misbegotten race was, in fact, never meant to be. Renacci had originally entered the GOP primary for governor that year in a field that included DeWine, but he switched to the Senate contest after the presumptive nominee, former state Treasurer Josh Mandel, unexpectedly dropped out. Republicans hoped that the state’s rightward drift would give them a good shot at unseating Brown, but they soon became dispirited by unfavorable polls and what they saw as a weak effort from Renacci.

Republicans were especially pissed that the challenger loaned his campaign $4 million but never spent most of it (almost $3.5 million in loans were repaid to the candidate after the campaign was over), and his actual fundraising from donors proved to be unimpressive. It didn’t help that he managed to attract unhelpful headlines like, “Jim Renacci failed to pay strip club owner for governor campaign flights,” and major outside groups never bothered to spend much money to aid him.

Brown ended up winning 53-47, even as DeWine prevailed 50-47 and the GOP swept every other partisan statewide race that same evening. Even Renacci himself agrees his decision to switch races was a botch: He recently called it “my biggest mistake and my biggest regret.”

Said Bush: “When you look at my policies, I’m all about America First. Trump is the center of the Republican Party. I’m my own man, I support him and we need to carry on that legacy and capture the lightning that he brought to the Republican Party so that we can help all of our fellow Republicans down ballot.”

More than a half-dozen aides and advisers who remain close to Mike Pence and Donald Trump told CNN that “the tension between both men has eased to a manageable level.”

“That has lent new hope to allies of the former vice president who once worried that Trump, furious over Pence’s refusal to indulge his unprecedented and unconstitutional request to block certification of the 2020 election results, would tank his shot at the Republican presidential nomination if he were to forgo running himself in 2024.”

Said one former Trump campaign official: “They are in a better place now. Things have simmered down after being pretty raw for awhile.”

TEXAS GOVERNOR — There’d been hints that state Agriculture Commissioner Sid Miller was considering a challenge to Gov. Greg Abbott in next year’s GOP primary, but now he’s finally confirmed his interest and says he’ll make a decision “in the next couple of weeks.”

CALIFORNIA 25TH CD — Former Democratic Rep. Katie Hill, who’d reportedly been considering a comeback bid, has now confirmed that she is in fact weighing a return to Congress. Hill, though, sounds ambivalent about the idea. “I don’t feel like I have an obligation to [seek office], other than to show that people can recover from things, and if you’ve had a mission to do something and people try to derail you from it, don’t let them,” she said, referring to the revenge porn attack that drove her to resign in 2019. “But I don’t know if that’s a good enough reason.”

NEW HAMPSHIRE 1ST CD — Former Trump White House staffer Karoline Leavitt, who is 24 years old, says she is considering a bid for New Hampshire’s 1st Congressional District, which is currently held by Democratic Rep. Chris Pappas but is likely to be targeted by Republicans in the upcoming round of redistricting.

OREGON 5TH CD — Army veteran Nate Sandvig has entered next year’s race against Democratic Rep. Kurt Schrader, making him the second Republican to do so after 2020 nominee Amy Ryan Courser. Sandvig didn’t appear to earn any local media attention with his launch, though his campaign treasurer, Cabell Hobbs, also serves as treasurer for prominent Republicans like John Bolton (who operates a super PAC) and was an assistant treasurer for an arm of George W. Bush’s re-election campaign.

OREGON GOVERNOR — Businesswoman Jessica Gomez has joined next year’s race for governor, making her the second notable candidate to seek the Republican nod after 2016 nominee Bud Pierce. Gomez has run for office once before, losing an open-seat race for the state Senate to Democrat Jeff Golden 55-45 in 2018.

CNN: “In early May at Mar-a-Lago, Trump met with Georgia state Sen. Burt Jones and Jones’ father, a wealthy pro-Trump donor, and said he wanted the younger Jones to run for governor against Brian Kemp in the Republican primary. With the former President’s backing, Jones could knock off the first-term governor, one of Trump’s top political targets.”

“But by the end of the meeting, Jones made it known to Trump he was unsure about taking on Kemp and that he preferred to run for lieutenant governor, according to four people familiar with the meeting.”

“Trump’s failure to recruit Jones would be a blow to the former President’s vendetta against Kemp, the otherwise pro-Trump stalwart who nonetheless refused the Trump’s calls to intervene and overturn his defeat in Georgia. It also highlights the limits to Trump’s power to pick and choose his candidates to ensure the Republican Party remains in his grip through the 2022 midterms and beyond.”

Asked by the Charleston Post & Courier if he will run for re-election next year, Rep. Jim Clyburn (D-SC) said: “Not just yes, but hell yes.”

Lindsey McPherson: “This is interesting. Alot of people thought Clyburn would retire when Pelosi did. While Pelosi has not committed to retiring, she made a promise in 2018 not to run for speaker again in 2022. And Clyburn has said he’s not interested in replacing her. So what’s his plan?”