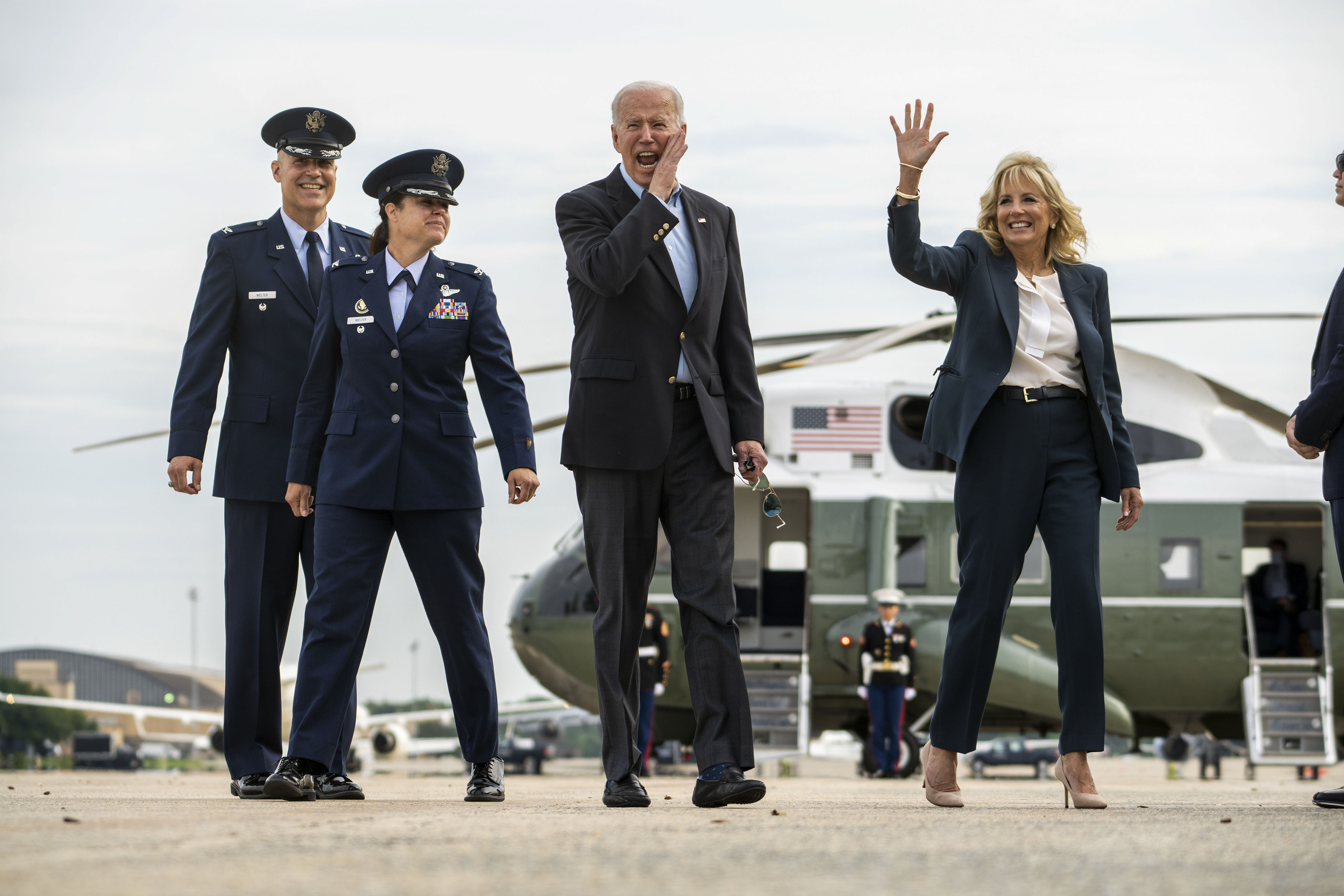 “Given the expected impact of redistricting, however, Democrats probably need a larger lead to keep control of the House.”

FWIW: “With an evenly split Senate, either party just needs to net one seat in next year’s midterm elections to gain a majority in the chamber. Campaigns have already launched; millions of dollars are being raised (and spent); and at least online, there’s only one side on the field.”

“Collectively, Democrats in critical Senate battlegrounds have already invested millions of dollars this year in digital ads to gear up their campaigns, while the NRSC and Republican candidates are lagging far behind.”

NEW YORK CITY MAYOR — Attorney Maya Wiley picked up an endorsement Wednesday from Public Advocate Jumaane Williams ahead of the June 22 Democratic primary. Williams, who was elected in 2019 as an ardent progressive, is one of just three citywide elected officials: The others are termed-out Mayor Bill de Blasio and one of Wiley’s rivals, city Comptroller Scott Stringer.

FLORIDA U.S. SENATOR — “Rep. Val Demings (D-FL) raised $1 million for her nascent Senate bid in the day after she announced that she plans to challenge Sen. Marco Rubio (R-FL) in 2022,” The Hill reports. “The $1 million figure is staggering for a candidate, especially in a year without any regularly scheduled federal elections.”

A day after the launch of her Senate campaign against Marco Rubio, EMILY’s List has endorsed Rep. Val Demings, who is the only notable woman seeking the Democratic nomination (and is likely to remain so).

“Brnovich, a libertarian-leaning Republican who has served as the state’s top prosecutor since 2015, becomes the third Republican to get into the race and the most well-known politically.”

Donald Trump is no fan of Brnovich, saying he was “nowhere to be found” when the 2020 election was “rigged and stolen.”

ALABAMA U.S. SENATOR — Katie Boyd Britt, who recently stepped down as the head of the Business Council of Alabama and is a former chief of staff to retiring GOP Sen. Richard Shelby, has announced that she is joining the Republican primary for this open seat to succeed her former boss. Britt appears to be making her first run for office and would be the first woman to represent Alabama in the Senate if elected.

Britt may be in for a tough primary against Donald Trump’s endorsed candidate, far-right Rep. Mo Brooks, but intra-party apathy to the congressman may give her an opening. CNN writes that some unnamed Republicans fear that Brooks, who was one of the ringleaders who egged on the crowd at the Jan. 6 rally that turned into an invasion of the U.S. Capitol, would be “an unreliable ally to the business community.”

In addition to Brooks, Britt joins a field that includes former Ambassador to Slovenia Lynda Blanchard. It takes an outright majority to win primaries in Alabama, and a separate runoff would take place if no one wins an initial majority.

The Club for Growth has dusted off a late April poll from WPA Intelligence showing Rep. Mo Brooks leading businesswoman Lynda Blanchard by a wide 59-13 margin in next year’s GOP Senate primary, with Business Council of Alabama head Katie Boyd Britt at 9 and 19% of voters undecided. (The survey was conducted well before Britt, who just kicked off her campaign the other day, entered the race.) The Club hasn’t endorsed Brooks yet, but sharing this poll is a signal that it may do so.

Said Shelby: “She’s like family. She’d make a good candidate. She’s probably the best-qualified candidate to come along in a long time. I’d support her, I’d vote for her.”

PENNSYLVANIA U.S. SENATOR / 6TH CD — Democratic Rep. Chrissy Houlahan announced Tuesday that she would seek re-election rather than enter the primary for Pennsylvania’s open Senate seat. The current version of her 6th District, which is based in Philadelphia’s Chester County suburbs and Reading, backed Joe Biden by a wide 57-42 margin, but redistricting could complicate things next year.

Schmidt’s only serious intra-party foe so far is former Gov. Jeff Colyer, who earned an endorsement last week from Rep. Tracey Mann, a freshman who represents what is by far the most conservative of Kansas’ four congressional districts. The development wasn’t a surprise, as Mann served as Colyer’s lieutenant governor and as his running mate during his unsuccessful 2018 primary campaign.

FLORIDA 7TH and 11TH CD — Far-right state Rep. Anthony Sabatini said Monday that he was dropping his Republican primary challenge to Rep. Dan Webster in the 11th District and would instead take on Democratic Rep. Stephanie Murphy in the 7th, though he characteristically did it in a bizarre way.

Sabatini tweeted, “BREAKING: Based on projected maps in Florida … this morning I OFFICIALLY filed for the new District 7 congressional seat,” and he accompanied his message with a map that showed his Lake County base located in a new 7th District. However, Sabatini soon acknowledged that these boundaries didn’t come from anyone in the legislature and instead came from people on the internet. “If you just literally Google how to make maps, you’ll find that there’s a lot of the data out there [and] you can do it yourself,” said the state representative.

Despite Sabatini’s confidence in those hypothetical boundaries, though, we probably shouldn’t expect to actually see them get passed. While Sabatini’s Republican legislative colleagues will have the chance to draw up a tougher seat for Murphy, they’re very unlikely to try to help a man who has a terrible relationship with party leaders.

Florida Data expert Matt Isbell also told the Orlando Sentinel that, while the conservative Supreme Court likely wouldn’t enforce much of the voter-passed Fair Districts amendment meant to curtail gerrymandering, “[T]he Republicans of Florida are not so stupid and lazy as to draw that map … That map is insulting to the ability of any party to gerrymander in a way that doesn’t look horrible.”

Sabatini himself seems to be aware he might not end up opposing Murphy after all: He said that he’d run for Congress if Lake County instead winds up in an open seat, though he insisted he wouldn’t campaign against a Republican incumbent.

Collins, who is the son of the late Rep. Mac Collins, ran the last time this constituency was open in 2014 and finished just a hair behind talk radio host Jody Hice in the first round of the Republican primary. Collins ran commercials featuring his father, who was shown sporting a black cowboy hat and his member of Congress pin, but that may have been the wrong message to send at a time when the party base was as furious as ever with the status quo.

Rep. Paul Broun, who had given up this seat to mount a failed Senate campaign, backed Hice and argued Collins would “do whatever the leadership wants.” The runoff proved not to be so close, and Hice won 54-46.

NEW YORK 1ST CD — 2020 Democratic nominee Nancy Goroff, who was in attendance when Suffolk County Legislator Kara Hahn kicked off her campaign for New York’s open 1st Congressional District last week, removed any doubt about whether she might run again when she formally endorsed Hahn on Monday.

OHIO 11TH CD — Cuyahoga County Councilwoman Shontel Brown is out with a positive ad ahead of the Aug. 3 Democratic primary. The spot, part of a $200,000 buy in Cleveland, features Brown and her mother in a split-screen format as the pair tout her accomplishments on the County Council. As she has in previous ads, Brown also emphasizes her support for Joe Biden, with her mother holding up a picture of Brown and Biden together as she claims “Shontel’s a Democrat’s Democrat, proudly voting for Joe Biden”.

Observers who have been following the race closely could interpret this as a veiled dig at former state Sen. Nina Turner, Brown’s chief competition in the primary, who has only offered tepid support for the president in the past. For most viewers, though, this is simply an effort by Brown to associate herself with Biden.

TEXAS 6TH CD — Party activist Susan Wright has released an American Viewpoint survey of the July 27 all-GOP special election runoff that gives her a 49-34 lead over state Rep. Jake Ellzey. This is the first poll we’ve seen of the contest between the Trump-endorsed Wright, who is campaigning to succeed her late husband, and Ellzey.

Trump’s decision came days after Stivers, who officially resigned from this very red suburban Columbus seat last month, backed state Rep. Jeff LaRe. That move, as well as Stivers’ decision to use his old campaign committee to air ads for the state representative, briefly made LaRe the primary frontrunner; another candidate, state Rep. Brian Stewart, subsequently dropped out and acknowledged he didn’t think he could compete against his Stivers-supported colleague. Trump’s support for Carey, though, likely upends this contest.

Carey himself doesn’t appear to have run for office since his 1998 defeat in an eastern Ohio state House seat against the late Charlie Wilson, a Democrat who went on to represent that area in Congress from 2007 to 2011, but he’s long been influential in state politics.

Back in 2011, Politico described Carey, who worked as an operative for the state coal industry, as “a one-man wrecking ball for Democrats who have strayed too far green for voters’ liking.” It noted that Carey’s political organization ran TV ads in Ohio in 2004 savaging the Democratic presidential nominee as “John Kerry, Environmental Extremist,” and he also targeted Barack Obama four years later.

Carey went on to work as a lobbyist for the coal giant Murray Energy, which was renamed American Consolidated Natural Resources Inc. last year after it emerged from bankruptcy protection. The company and its leadership has long been a major foe of environmentalists in Ohio and nationally, with former chief executive Robert Murray, a close Trump ally, lavishly funding global warming deniers.

The first commercial prominently features former Del. Jennifer Carroll Foy, who finished second in the Democratic primary, and shows several clips of her criticizing McAuliffe. Youngkin appears at the end to call himself “a new kind of leader to bring a new day to Virginia.” However, before the ad even had a chance to air, Carroll Foy had already unambiguously endorsed McAuliffe’s bid for a second term as governor.

The second spot follows a similar theme of a “new day.” It begins showing a legion of grey-haired white men in suits while Youngkin’s voiceover decries “the same politicians taking us in the wrong direction.” Youngkin, a younger, less-grey white man wearing a vest, then appears amid the crowd to describe the policies he would pursue as governor.

An internal poll for Republican businessman Glenn Youngkin conducted by WPA Intelligence finds newly minted Democratic nominee Terry McAuliffe with a narrow 48-46 edge in the November general election for Virginia’s open governorship. To date, there’s been no other publicly released polling of this matchup.