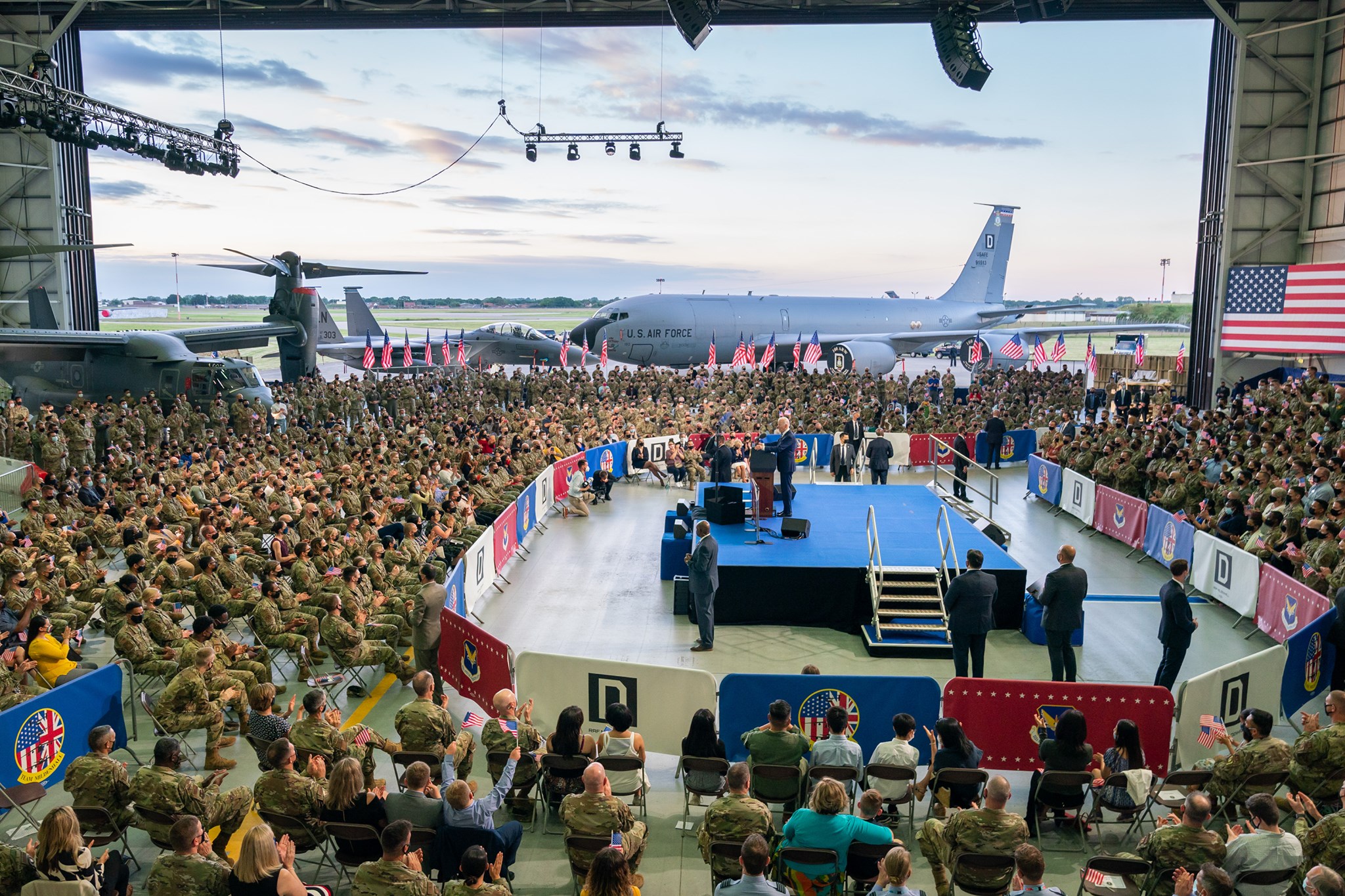 Associated Press: “Biden once called the British leader a ‘physical and emotional clone’ of Trump. The British government has worked hard to overcome that impression, stressing Johnson’s common ground with Biden on issues such as climate change and his support for international institutions.”

“But Johnson, the host for the Group of Seven summit that will follow his sit-down with Biden, has been frustrated by the lack of a new trade deal with the United States.”

NBC News: “During his time as a senator and member of the Foreign Relations Committee, Biden’s office began cataloguing his travels. A version of that document has survived to this day, handed down from staffer to staffer and allowing them to refresh their, or Biden’s, recollection of potential past encounters.”

When asked this week how Biden was preparing for his first trip abroad as president, White House press secretary Jen Psaki joked: “He’s been getting ready for 50 years.”

Pew Research: “The election of Joe Biden as president has led to a dramatic shift in America’s international image. Throughout Donald Trump’s presidency, publics around the world held the United States in low regard, with most opposed to his foreign policies. This was especially true among key American allies and partners. Now, a new Pew Research Center survey of 16 publics finds a significant uptick in ratings for the U.S., with strong support for Biden and several of his major policy initiatives.”

“In each of the 16 publics surveyed, more than six-in-ten say they have confidence in Biden to do the right thing in world affairs. Looking at 12 nations surveyed both this year and in 2020, a median of 75% express confidence in Biden, compared with 17% for Trump last year.”

“Prices were up by 5 percent in May compared with a year ago, the largest increase since the Great Recession, continuing a steady climb in inflation even as policymakers insist on staying the course,” the Washington Post reports.

“The disagreement—which some legal observers said President Biden courted by selecting an attorney general committed to operating independently—surfaced this week when the Justice Department announced it would continue its defense of former President Donald Trump in a defamation suit stemming from a decades-old rape allegation by journalist E. Jean Carroll.”

“A court in Moscow outlawed groups linked to the jailed opposition leader Alexei Navalny yesterday in a move intended to silence dissent and bar Kremlin critics from running for parliament in September,” the Times of London reports.

Foreign Policy: “Nicaragua has been in the throes of Ortega’s dictatorial clampdown since a citizen uprising against him in April 2018, when hundreds of people were killed and thousands of people were injured, making it the worst wave of political violence in Latin America in three decades. More than 100 political prisoners still languish in Nicaragua.”

“Now, as he seeks a fourth straight term in office, Ortega is tightening the screws by removing opposition candidates from the field—one by one. Ortega’s actions slam the door on the (already narrow) electoral route to restoring democracy, contributing to significant uncertainty about the country’s future.”

“The apparent electoral win in Peru of Pedro Castillo, a rural union activist from a Marxist party, over conservative rival Keiko Fujimori signals what may be a far-reaching shift to the left in a region ravaged by Covid and filled with fury at ruling elites,” Bloomberg reports.

“Candidates on the left appear poised for victory in Chile, Colombia, and Brazil over the next 16 months. With leftists already running Argentina, Mexico, Venezuela, and Bolivia, it could resemble the ‘pink tide’ at the start of this century, kicked off by Venezuela’s election of Hugo Chávez in 1998.”

The man who slapped French President Emmanuel Macron while he was shaking hands with members of the public earlier this week was sentenced to four months in prison, Reuters reports.

“For the first time ever, the number of professionals registered with the century-old Communist Party of China has exceeded the number of factory and farm laborers in its ranks, showing the changing nature of the self-described vanguard of the working class,” Nikkei Asia reports.

Despite opposition from most Republicans, the U.S. Senate agreed 52 to 46 to cut off debate on the appeals court nomination of U.S. District Court Judge Ketanji Brown Jackson, meaning her confirmation for a seat on the U.S. Court of Appeals for the District of Columbia Circuit is all but assured, USA Today reports.

“Members of a bipartisan group of senators said they had reached an agreement on an infrastructure proposal that would be fully paid for without tax increases, pitching the plan to other lawmakers and the White House as they try to craft compromise legislation on the issue,” the Wall Street Journal reports.

“While the group of 10 senators didn’t reveal details of the plan in its statement, people familiar with the plan said it called for $579 billion above expected future federal spending on infrastructure. The overall plan would spend $974 billion over five years and $1.2 trillion if it continued over eight years.”

“To move forward in Congress, the plan would need the buy-in from a broader group of Republicans and Democrats, as well as the White House. In recent days, some Democrats have indicated they are skeptical that the bipartisan talks will result in a large enough package.”

Sen. Chris Van Hollen (D-MD) said that it’s time for his party to move forward on infrastructure legislation without Republican agreement, asserting that members of his party “cannot just sort of twiddle our thumbs at the negotiating table while the time fritters away,” CNN reports.

Hayes Brown: “The GOP’s offers included a lot of money that Congress was already going to spend, or they would have reauthorized older appropriations. When you look at the new spending in the GOP’s offers, the gaps are much starker. In the end, the GOP offered to support only 15% of the American Jobs Plan’s original cost.”

Senate Minority Leader Mitch McConnell (R-KY) said he has no expectation that Sen. Joe Manchin (D-WV) will switch parties, The Hill reports.  Said McConnell: “Well, Sen. Manchin has pointed out over and over again he’s been a Democrat all of his life. I am certainly not anticipating that he’s going to cross the aisle.”  He added: “But I do admire his willingness to protect the Senate as an institution.”

Slate: “The Canadian company behind the controversial Keystone XL oil pipeline called it quits on the project Wednesday, ending a decade-long standoff over the $8 billion pipeline that promised to transport 830,000 barrels of crude oil across the American plains each day.”

A Capitol riot suspect who was captured on video shouting to police that they were “protecting pedophiles” was himself previously convicted of statutory rape of a 14-year old girl, CNN reports.

Said Cheney: “When he says that our system doesn’t work… when he suggests that it’s, you know, incapable of conveying the will of the people, you know, that somehow it’s failed — those are the same things that the Chinese government says about us.”

“The Taliban are encircling Afghan police and army positions and encroaching on government-held territory, positioning themselves for large-scale offensives against major population centers while waiting for the last American troops to depart Afghanistan,” the Wall Street Journal reports.

“The Pentagon is considering seeking authorization to carry out airstrikes to support Afghan security forces if Kabul or another major city is in danger of falling to the Taliban, potentially introducing flexibility into President Biden’s plan to end the United States military presence in the conflict,” the New York Times reports.

“Mr. Biden and his top national security aides had previously suggested that once U.S. troops left Afghanistan, air support would end as well, with the exception of strikes aimed at terrorist groups that could harm American interests.”

Said McGahn: “If the Acting Attorney General received what he thought was a direction from the counsel to the President to remove a special counsel, he would either have to remove the special counsel or resign. We are still talking about the ‘Saturday Night Massacre’ decades and decades later.”

When asked if Trump had demanded McGahn “do crazy shit,” McGahn said he thought that was a “fair” characterization of the president’s request.

Said Trump: “Congratulations to the county of Nigeria, who just banned Twitter because they banned their president. More countries should ban Twitter and Facebook for not allowing free open speech — all voices should be heard.”

Trump then hinted he’ll run again for president in 2024.

The Information: Bezos’ taxes in the spotlight.

“The attorney general’s public integrity unit is separately scrutinizing whether the Democratic governor misused public resources when his administration provided Cuomo relatives with preferential coronavirus testing and aides helped him write a book last year that netted him more than $5 million.”

“And federal investigators have quizzed at least five former state Department of Health employees about the administration’s handling of the coronavirus in nursing homes and whether the office deliberately misled the federal government and the public about the number of deaths last year.”

Wall Street Journal: “Prosecutors working for the U.S. Attorney’s Office for the Eastern District of New York in Brooklyn asked for communications related to Mr. Cuomo’s October 2020 book, American Crisis, including contracts and materials used to pitch the book to publishers, the people said. They said the subpoenas indicated prosecutors are interested in nursing-home issues in the book, which more broadly recounted the governor’s response to the pandemic.”

“The number of undocumented migrants reaching the US-Mexico border has hit the highest level in more than 20 years in the latest sign of the humanitarian crisis facing the Biden administration,” the BBC reports.

A Cleveland doctor and anti-vaccine advocate went on a rant about 5G internet and metal objects sticking to the bodies of vaccinated people while giving testimony at an Ohio House Health Committee meeting,” WKBN reports.

“Hearing impairment, severe gastric upsets and blood clots leading to gangrene, symptoms not typically seen in Covid patients, have been linked by doctors in India to the so-called delta variant. In England and Scotland, early evidence suggests the strain — which is also now dominant there — carries a higher risk of hospitalization.”