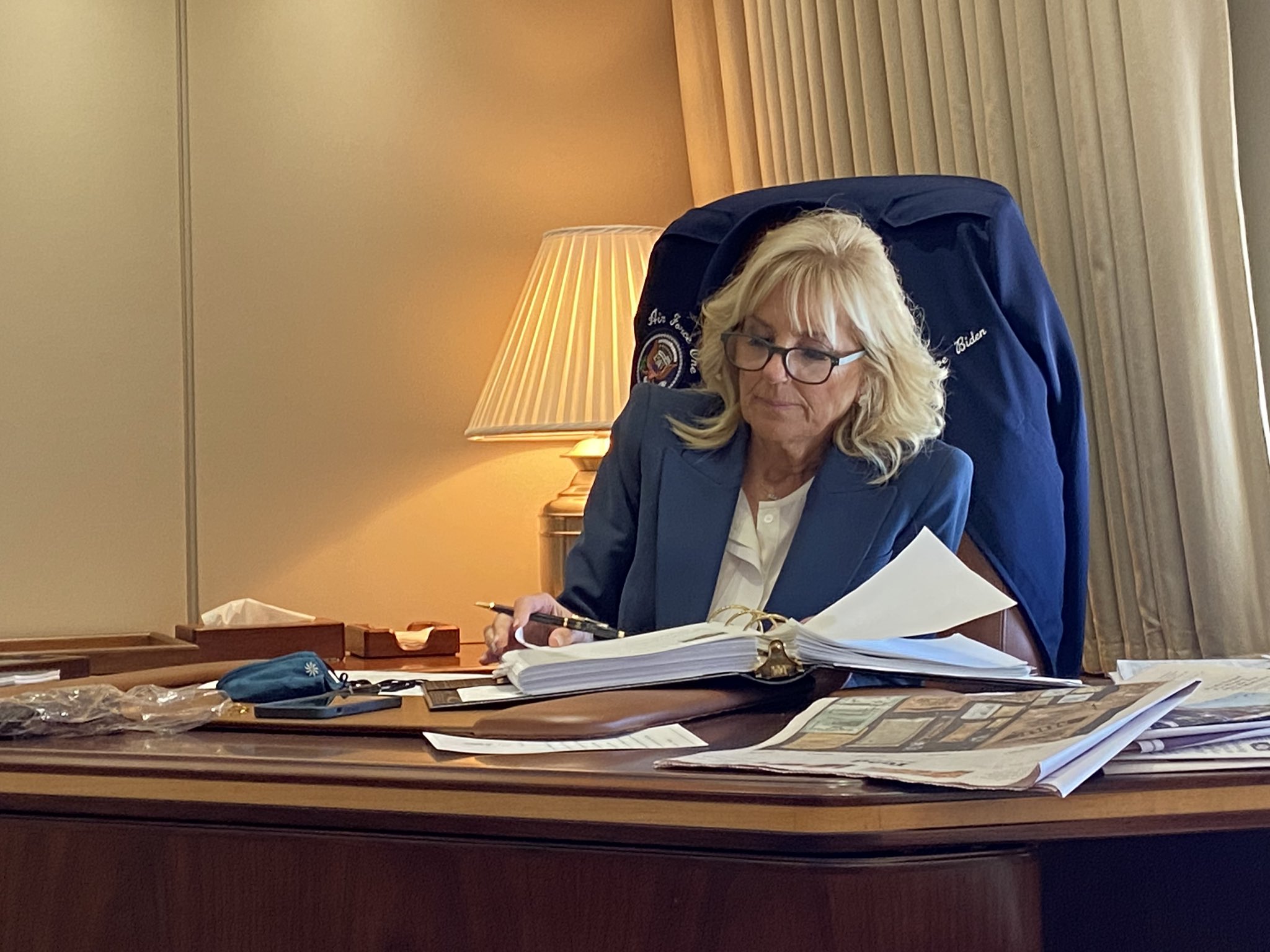 Geoffrey Skelley: “Members from the other party were once more willing to give a new president some benefit of the doubt early on — or at least, their opposition was not quite so baked in.”

“This lack of crossover support for presidents in their first term in office points toward one of the most animating forces in American politics today: Increased disdain and hatred of one’s political opponents.”

NEW JERSEY GOVERNOR — Just hours before polls closed in the Garden State for Tuesday’s primary, Rutgers University’s Eagleton Institute of Politics released a poll of a matchup between Democratic Gov. Phil Murphy and former Republican Assemblyman Jack Ciattarelli that showed Murphy comfortably ahead 52-26. The survey found 10% of respondents undecided and an additional 11% who declined to choose either candidate.

The poll only pitted Murphy against Ciattarelli, a matchup that’s no longer hypothetical since Ciattarelli secured the GOP nod with 49% of the vote on Tuesday and Murphy faced no intra-party opposition.

These numbers are peculiar for two reasons: First, why would the state GOP want to make a prominent potential recruit like James look less electable—unless party leaders actually would prefer he stay out of the race, that is? The second oddity is the data itself. The 12-point difference in Whitmer’s share as between the two matchups suggests that Craig, who’s never run for office before, has an ability to win over Democratic voters so strong as to be almost unique in American politics today.

This extremely bifurcated take also stands in contrast to an independent poll last month from Target Insyght for the local tipsheet MIRS News, which found Whitmer up 48-42 on Craig and 49-39 on James. We’ll need more polling before we can get a better sense of where things stand, but in today’s extremely polarized political environment, the results from Target Insyght make much more sense than those from Competitive Edge.

PENNSYLVANIA GOVERNOR — Sen. Scott Martin says he’s considering joining the Republican primary for Pennsylvania’s open gubernatorial race but cautioned he wants “to take the time to make sure that the support needed to run a winning campaign is truly there.” According to Gillian McGoldrick at Lancaster Online, though, Martin said last month that he’d kick off a bid “in the next few weeks,” so it seems that he’s now slowing his roll.

The Associated Press reports that Republican strategist Charlie Gerow is considering a bid for governor, though there’s no quote from Gerow himself. Gerow’s run for office twice before, losing bids in the GOP primary for Pennsylvania’s old 19th Congressional District in both 1996 and 2000. (The closest successor to the 19th is the present-day 10th District, as both are centered around York and Cumberland counties.)

NEW MEXICO GOVERNOR — Plenty of Republicans are blaming state party chair Steve Pearce for the party’s poor performance in last week’s special election for the 1st Congressional District, but if you think that’ll shame him out of considering another campaign for governor, well, you really don’t know Steve Pearce.

The former congressman told Politico he wasn’t in any hurry to decide whether he’d seek a rematch with Democratic incumbent Michelle Lujan Grisham, who beat him 57-43 in 2018. “People know who I am, they know what my values are,” he said, adding, “and we’ll make that determination as we get closer to the filing deadline.”

Pearce cultivated a very conservative image during his two stints representing southern New Mexico in the House, and he’s only gotten worse since he took over as state party chair. Pearce refused to recognize Joe Biden’s 54-43 victory in the state and unsuccessfully sued to overturn the results. He later put out a statement the day after the Jan. 6 attack on the U.S. Capitol that condemned Congress for certifying Biden’s electoral college win and did not mention the far-right violence that had just taken place.

All of that may have had real consequences for Team Red last week. A trio of Republicans publicly attributed Pearce’s Trump-like behavior for the party’s decline, while Metzger also notes that “the state party blamed the loss in the special election on depressed voter turnout due to lingering anger over the 2020 election, anger that the state party arguably helped foment.”

ARIZONA GOVERNOR — Recently retired Maj. Gen. Michael McGuire, who stepped down as adjutant general of the Arizona National Guard back in April, has announced that he will join the GOP primary to take on Democratic Sen. Mark Kelly next year. McGuire is making his first run for office after three decades in uniform, but he previously gained some visibility due to his role in televised briefings over the state National Guard’s efforts to address the pandemic.

McGuire joins a primary that includes businessman Jim Lamon, but the field is likely to grow even larger still as former Rep. Andy Biggs has previously expressed interest in running and state Attorney General Mark Brnovich is reportedly considering, too.

OHIO U.S. SENATOR — Venture capitalist J.D. Vance, who’s been considering running for the GOP nomination for Ohio’s open Senate seat, now says, “I’ll have a pretty big announcement, I think, in the next six or so weeks.”

A new poll of next year’s GOP Senate primary in Ohio from former state Treasurer Josh Mandel unsurprisingly finds Mandel leading former state party chair Jane Timken 35-16, with all other candidates (actual and hypothetical) in the mid-to-low single digits and 34% of voters undecided. The survey, from Remington Research, is likely intended as pushback to a recent set of Timken internals from Moore Information that showed her gaining on Mandel, the newest of which had Mandel up just 24-19.

MISSOURI 4TH CD — Show Me State politicos widely expect that Rep. Vicky Hartzler will enter the Senate race on Thursday, especially since her “Special Campaign Announcement” will take place outside her 4th District, and several fellow Republicans are already talking about running to succeed her. This west-central Missouri constituency supported Donald Trump last year by a wide 66-32 margin, and there’s no question it will remain safely red after redistricting.

The Missouri Independent recently spoke to a number of potential GOP candidates, and several acknowledged they were considering campaigning here:

The only person who said anything about a timeline to decide was Hoskins, who also serves on the Senate Select Committee on Redistricting. The state senator said, “I have not made any concrete, firm decisions, but I am definitely interested in this race and we will see what plays out in these next few months.” Burks, meanwhile, said he was a “likely candidate” to replace Hartzler.

P.S. If Hartzler seeks a promotion, this would be the first open seat race in much of this area since 1976, when west-central Missouri was a very different place politically. That year Ike Skelton, who had the support of former first lady Bess Truman, decisively won the race to succeed a fellow Democrat in an earlier incarnation of the 4th District. Skelton remained a popular figure at home even as his constituency became more and more Republican over the decades, but he ultimately lost to Hartzler during the 2010 GOP wave.

“For the past seven months, a group of Republican lawmakers have engaged in efforts to cast doubt on Georgia’s election integrity,” Georgia Public Broadcasting  reports. “Now, some are parlaying their election skepticism into bids for higher office, launching campaigns for Congress, the governor’s mansion and the office of the top election official in the state.”

NEBRASKA GOVERNOR — Former Republican Gov. Dave Heineman, who’s been very cagey about a possible comeback bid, has finally confirmed he’s thinking about next year’s open gubernatorial race, though he says he’s “in no rush to make a decision.” Heineman did however just announce his resignation as a director of the Conklin Company, an agriculture manufacturing firm that just happens to be owned by businessman Charles Herbster, who announced his own bid for the GOP nod in April.

Meanwhile, the Lincoln Journal Star’s Don Walton also reports that Republican state Sen. Brett Lindstrom, who’s been publicly considering a campaign, is “expected” to join the contest, though there’s no word on when.

MAINE GOVERNOR — The Bangor Daily News reports that former Gov. Paul LePage’s campaign kickoff against his successor, Democratic Gov. Janet Mills, “is widely expected this summer.” Last year, before Mills was even sworn in, LePage said he would “unequivocally” seek a third term, telling a radio host, “If I’m breathing, I’m running.” In April, however, a LePage spokesperson said there was no “impending or planned announcement” about a campaign.

MARYLAND GOVERNOR — Nonprofit head Wes Moore, an Army veteran who served in Afghanistan, announced Monday that he was joining the crowded Democratic primary for this open seat. The new candidate, who would be the state’s first Black governor, recently stepped down as head of the Robin Hood Foundation, a nonprofit focused on fighting poverty in New York City that Maryland Matters says “distributed $600 million during Moore’s tenure.”

Moore is also a nonfiction author whose work includes The Other Wes Moore, which contrasts his life with another Baltimore City resident with the same name who would go on to be sentenced to life in prison (a film version is currently under development), and Five Days, a 2020 book about the 2015 “uprising that overtook Baltimore after the police killing of Freddie Gray.” Moore himself has not run for office before, though his wife served as a top aide to then-Lt. Gov. Anthony Brown.

CALIFORNIA GOVERNOR — The likely recall election of Democratic Gov. Gavin Newsom could take place much earlier than expected, reports the Mercury News’ Emily DeRuy, if officials take less than the allotted 60 days to review cost estimates after the clock to do so starts ticking on Tuesday. Earlier forecasts that had incorporated this full two-month review period into hypothetical election calendars generally predicted a recall in October or November, but it’s possible it could go forward as soon as August.

Political calculations are sure to play a role in the timing, as DeRuy discusses, though the variables are complex and cut both ways. An earlier recall could, for instance, allow Newsom to face voters before a potentially dangerous wildfire season, but a summertime vote could see turnout favor Republicans more than a more typical fall election might.

“James Murdoch, the son of billionaire media mogul Rupert Murdoch, quietly invested $100 million into his nonprofit foundation, which then used a chunk of the money to fund political groups during the 2020 election cycle,” CNBC reports.

“It was previously known that James and Kathryn Murdoch backed President Joe Biden’s 2020 campaign. But it was unknown until now just how much they were spending behind the scenes to impact the election. Combined with the millions they gave to campaigns and political action committees, the $100 million donation would make the couple one of the top donors in the last election cycle.”

Actor-turned-activist Alyssa Milano (D) may challenge Rep. Tom McClintock (R-CA) — but she would wait until the 2024 cycle, The Hill reports. Said Milano: “It’s going to take someone with, I think, name recognition and deep pockets to be able to run against McClintock, and so I’m considering it.”