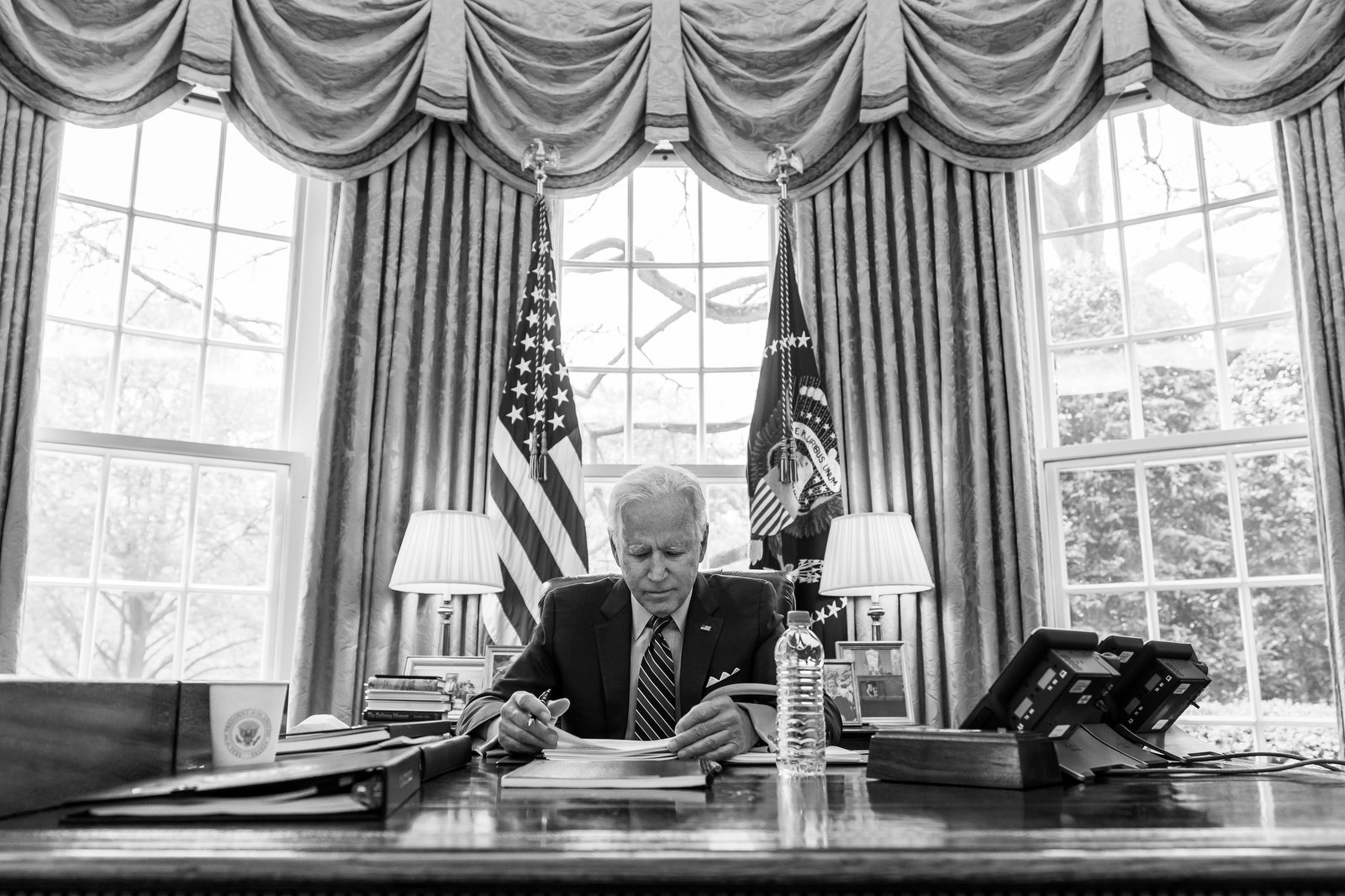 “President Joe Biden will touch down in Europe on Wednesday looking to repair relations with America’s closest allies in an effort to counter growing threats from China and Russia in his first big moment on the world stage since taking office,” NBC News reports.

“In many ways, it will be familiar turf for Biden. Few presidents have had his level of foreign policy experience, from decades on the Senate Foreign Relations Committee to his time as vice president. But the world has experienced dramatic changes in the more than four years since Biden was last on the front lines of American foreign policy.”

USA Today: What to expect from Biden’s trip to Europe.

“President Biden is revoking the Trump administration orders that sought to ban TikTok, WeChat and other Chinese apps and replacing it with a new security review that could prompt fresh steps to restrict those or other apps,” the Washington Post reports.

“New cases of Covid-19 in Russia surged over 10,000 today to the highest in more than three months as widespread skepticism toward domestically-developed vaccines undermines attempts to corral the pandemic,” Bloomberg reports.

“The growing number of cases in Russia is unusual among countries that offer adults universal access to a vaccine, and belie official statements that the situation is nothing to worry about.”

Nature: “For more than a week, an average of about 20 million people have been vaccinated against COVID-19 every day in China. At this rate, the nation would have fully vaccinated the entire UK population in little more than six days.”

“The Senate voted on Tuesday to adopt a roughly $250 billion bill to counter China’s growing economic and military prowess, hoping that major investments in science — and fresh punishments targeting Beijing — might give the United States a lasting edge,” the Washington Post reports.

“The proposal commits billions of dollars in federal funds across a wide array of research areas. It pours more than $50 billion in immediate funding into U.S. businesses that manufacture the sort of ultrasmall, in-demand computer chips that power consumer and military devices, which many companies currently source from China. And it paves the way for the next generation of space exploration at a time when Washington and Beijing are increasingly setting their eyes on the stars.”

“President Biden spoke with Senate Majority Leader Chuck Schumer (D-NY) on Tuesday about moving forward with the budget reconciliation process as a potential pathway to get his $2.25 trillion infrastructure proposal passed this summer,” The Hill reports.

Washington Post: “Senate Democrats are looking at the possibility of breaking the infrastructure package in two.”

“They could try and assemble one bill with Republicans and then try and pass a separate measure with only Democratic support in an effort to meet all of their objectives, but both strategies could prove difficult execute.”

“A bipartisan Senate group is taking tax increases off the table as lawmakers try to craft an infrastructure proposal after GOP talks with the White House collapsed Tuesday,” The Hill reports.

Playbook: “But this is not really about the Republicans in the group. It’s about two of the Democrats in it: Joe Manchin and Kyrsten Sinema. There was no way Biden could go to them and explain he’s exhausted his bipartisan options without a real effort at negotiating with the very group they’re in.”

“A big reconciliation bill is happening no matter what. Both Sen. Bernie Sanders and Majority Leader Chuck Schumer made that clear Tuesday. The only question is whether a bipartisan infrastructure bill precedes it.”

Politico: “Behind the scenes, the president — who spent nearly half his life in the Senate — is taking a more subtle approach to the senator. In an interview, Manchin said Biden has not leaned on him to support the sweeping elections bill that the moderate Democrat publicly rejected over the weekend. Nor has Biden covertly asked Manchin to support another Democrat-only spending bill focused on jobs and the economy. Yet.”

“Biden and his senior staff are regularly in touch with Manchin… Still, they don’t see eye-to-eye on everything… Biden can win Manchin over when it matters, but the former longtime Democratic senator must be strategic in both timing and substance.”

Rep. Alexandria Ocasio-Cortez (D-NY) warns on Twitter: “During the Obama administration, folks thought we’d have a 60 Democrat majority for a while. It lasted 4 months. Democrats are burning precious time and impact negotiating with the GOP who won’t even vote for a Jan 6 commission. McConnell’s plan is to run out the clock. It’s a hustle. We need to move now.”

AOC was an intern in the office of Sen. Ted Kennedy when he died and triggered a special election that cost Democrats their supermajority.

“I’m trying to figure out a way that we can get an infrastructure package that can find support, so let’s make this happen. Around this place there’s a lot of things that appear to be dead that take on a life of their own afterward.” — Sen. Lisa Murkowski (R-AK), quoted by the New York Times.

Said Thune: “It’s hard for me to see a scenario where even 10 Republicans would vote for something that gets very far beyond where Shelley’s discussions were with the White House.”

Sen. Shelley Moore Capito’s negotiations with Biden were blessed by the Republican leadership. It’s clear these are not.

Rep. Louie Gohmert (R-TX) asked at a congressional hearing whether the National Forest System or the Bureau of Land Management could “change the course of the Moon’s orbit or the Earth’s orbit around the Sun.”

The official politely responded: “I would have to follow up with you on that one.”

Rick Hasen: “The New York Times reported last month that Supreme Court Justice Stephen Breyer, age 82, has been resisting calls for his retirement from fellow progressives. The reason? Breyer apparently worries that retiring in the face of a public pressure campaign from Democrats will increase polarization and a politicized view of the Supreme Court.”

“In reality, a Breyer retirement delay could well have the opposite effect. If Breyer delays too long and Democrats lose control of the Senate before a successor is chosen, then Mitch McConnell could have the opportunity to block a Breyer replacement and supercharge the last five years of intense polarization around the court.”

“Senate Democrats said they were considering changes to their election overhaul proposal, after pivotal centrist Sen. Joe Manchin made clear he opposed both the current bill and any imminent move to weaken Republicans’ power to block legislation,” the Wall Street Journal reports.

“The pledge came after Democrats complained that Mr. Manchin had declined to specify what changes he wanted.”

Sen. Jacky Rosen (D-NV) told the Washington Post that she’s unwilling to eliminate the Senate filibuster. Said Rosen: “I think we just have to continue to talk and to be open and allow people to see that healthy debate on the floor and we’ll just go from there.” However, Rosen is willing to “reform” the filibuster.

“The Biden administration is buying 500 million doses of Pfizer’s coronavirus vaccine to donate to the world, as the United States dramatically increases its efforts to help vaccinate the global population,” the Washington Post reports.

“President Biden is slated to announce the plan at the G-7 meeting in Britain this week amid growing calls for the United States and other rich countries to play a more substantial role in boosting the global supply of vaccines.”

Sen. John Cornyn (R-TX), who has been negotiating with Sen Chris Murphy (D-CT) to reach a long shot bipartisan compromise on gun background checks, told CNN they were “unable to find an agreed upon outcome”  and that talks have now ceased.

Said Cornyn: “Unfortunately we’ve been unable to find an agreed upon outcome, so basically, he suggested to me that there wasn’t any real reason to continue talking right now.”

The Guardian: “San Francisco is still recording a small number of coronavirus cases, about 13.7 per day… but they don’t appear to be gaining enough of a foothold in the population to trigger wider outbreaks.”

Said Dr. George Rutherford, professor of epidemiology at University of California: “That is what herd immunity looks like. You’re going to have single cases, but they’re not going to propagate out.”

“Senate Republicans on Tuesday blocked legislation aimed at addressing pay inequality, marking their second successful use of the filibuster under President Biden,” The Hill reports.

“Senators voted 49 to 50 to try to advance the legislation, falling short of the 60 votes needed to overcome the procedural hurdle.”

“She’s already familiar with the job, having done the same thing three years ago after FBI raids on Michael Cohen, another one of Trump’s former personal attorneys.”

“President Joe Biden has quietly begun efforts to close the U.S. detention facility at Guantánamo Bay, Cuba, using an under-the-radar approach to minimize political blowback and to try to make at least some progress in resolving a long-standing legal and human rights morass before the 20th anniversary of the terrorist attacks of Sept. 11, 2001,” NBC News reports.

“After initial plans for a more aggressive push to close the facility — including rebuffed attempts to recruit a special envoy to oversee the strategy — the White House changed course, sources said. The administration has opted to wait before it reaches out to Congress, which has thwarted previous efforts to close the camp, because of fears that political outcry might interfere with the rest of Biden’s agenda.”

“On the verge of being replaced after 12 years in power, Israeli Prime Minister Benjamin Netanyahu is waging a desperate, Trump-style campaign to de-legitimize the incoming government and accuse its leaders of perpetrating ‘the fraud of the century,’” Axios reports.

“The situation has become so tense — with members of the Israeli Knesset facing death threats and demonstrations from angry Netanyahu supporters outside their homes — that the director of Israel’s Shin Bet domestic security agency issued a rare warning of potential political violence.”

NPR: “Attorneys Michael Van Der Veen and Bruce Castor defended Trump at his Senate impeachment trial over allegedly inciting the Jan. 6 U.S. Capitol insurrection. Even as van der Veen, Castor and the Trump defense team called the impeachment ‘political theater’ and ultimately secured Trump’s acquittal, they condemned the rioters for bringing ‘unprecedented havoc, mayhem and death’ to the Capitol. They argued in a legal brief that the rioters’ actions deserve ‘robust and swift investigation and prosecution.’”

“Now, van der Veen and Castor find themselves on the other side of those prosecutions, defending at least three people charged in connection with the Capitol breach.”

“The Justice Department in a court filing said it can ‘vigorously’ defend a religious exemption from federal civil rights law that allows federally funded religious schools to discriminate against LGBTQ students, a move that surprised some LGBTQ advocates who said the wording went further than just an obligation to defend an existing law,” the Washington Post reports.

Mitch McConnell must be wondering why he ever thought he needed to block Merrick Garland.