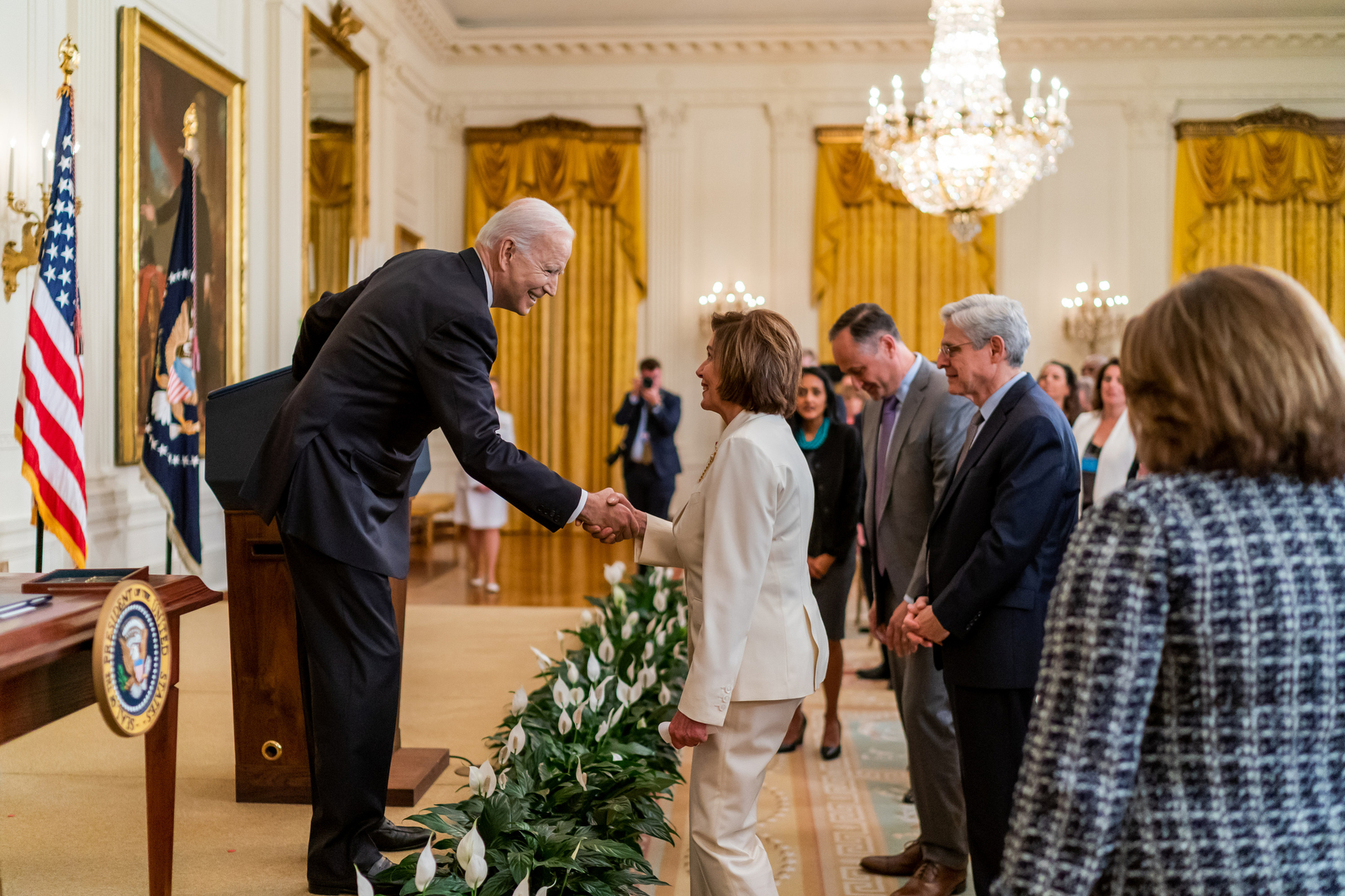 A new Morning Consult poll finds 29% of Republican voters believe Donald Trump will be “reinstated” as president later this summer. In addition, 59% of GOP voters polled think Trump should play a major role in the party going forward.

A new Change Research poll in Alaska finds Kelly Tshibaka (R) leading the U.S. Senate race on the initial ballot with 39%, followed by Al Gross (D/I) by 25%, and Sen. Lisa Murkowski (R) by 19%. Alaska will used a ranked-choice ballot this year so a second choices would matter.

Gallup: “Americans are sharply divided in their abortion views, including on its morality, with an equal split between those who believe it is morally acceptable and those who say it is morally wrong.”

“The 47% who say it is acceptable is, by two percentage points, the highest Gallup has recorded in two decades of measurement. Just one point separates them from the 46% who think abortion is wrong from a moral perspective.”

“Dark money groups tied to Donald Trump’s inner circle and backed by people who have spread baseless claims about the 2020 presidential election appear to be playing a key role in funding an unprecedented review of 2.1m ballots in Arizona,” The Guardian reports.

“Republicans in the Arizona state senate, which authorized the inquiry, allocated $150,000 in state funds to pay for it – just a fraction of the projected overall cost, which is still unknown… Instead, the effort is being paid for by private donors, who remain hidden from the public.”

Georgia Public Broadcasting: “An ongoing lawsuit in Fulton County seeks to unseal more than 145,000 absentee ballots only and inspect them for evidence of counterfeit or fraudulent ballots, but that is currently on hold after all of the defendants in the case filed motions to dismiss.”

“But based on a GPB News analysis of Georgia election rules and practices, extensive reporting on Georgia’s new election system and interviews with elections experts, there is no way to ‘forensically audit’ absentee ballots or votes printed out by ballot-marking devices, and numerous safeguards are in place to verify only legal votes are counted.”

Politico: “The mayoral hopeful has been staying overnight and keeping late-night and early-morning hours in the government building where he and his staff work… When he is not laying his head in the taxpayer-owned building, the borough president has provided conflicting information on official documents about where he resides.”

“Adams is leading the pack of Democratic candidates to become New York City’s next mayor, riding a wave of concern about crime that is bolstered by his 22-year career with the NYPD. Now as borough president, an examination of his government and political activity reveals blurred lines between the two, as well as a confusing account of his residential status for someone seeking one of the most visible jobs in the country.”

“The race for New York City mayor took an extraordinary turn on Wednesday as the leading candidate, Eric Adams, gave reporters a tour of a Brooklyn apartment he owns, while rival campaigns questioned his residency and fitness for office,” the New York Times reports.

“Matchups for the state’s down-ballot races were also set, but don’t expect a ton of ticket-splitting among the state’s three statewide elected offices.”

First Read: “With most (though not all) of the votes counted in last night’s Democratic gubernatorial primary in Virginia, turnout was more than 480,000.”

“But that Democratic turnout yesterday even got close to what it was in the first year of Trump’s presidency is something Dem strategists are touting.”

Former Republican Rep. Denver Riggleman confirmed Tuesday morning that he would not run as an independent this fall.

FiveThirtyEight: “We looked at candidates who’ve run for U.S. Senate, governor or president after they lost just one election and then tried to run again and found that since 1998, only 33 of 121 of them have managed to win higher office after having lost once.”

“But after two failed bids, the numbers get even worse. Just 20 people have run for U.S. senator, governor or president after losing two consecutive elections. And only one, Louisiana Sen. John Kennedy, who won a 2016 runoff race after losing two previous Senate races, was successful.”

Absolutely. America should not be subsidizing a foreign apartheid state. We have enough problems with that at home.

Insider: “Senate Republican reelection chief Rick Scott is using an unorthodox playbook to reclaim the majority in 2022. It doesn’t involve talking up GOP lawmakers or have anything to do with mapping out what they’d do if they wrest back control of the 50-50 chamber.”

“Instead, the first-term junior senator from Florida has been incessantly promoting Donald Trump in emails theoretically designed to help GOP candidates win.”

Josh Kraushaar: “Former President Trump could have been an important asset for the GOP, turning out voters as it seeks to regain control of Congress in next year’s midterm elections. But, out of office, he’s continuing his destructive behavior, endorsing weaker candidates in contested primaries, squelching the campaigns of erstwhile allies, and elevating not-ready-for-prime-time contenders in must-win Senate contests.”

“His erratic behavior since losing the presidential election—exemplified by his conspiracy theorizing and suppression of the GOP vote in Georgia’s Senate runoffs in January, handing Democrats the majority—is only accelerating as the midterms draw closer. It’s leading to increasing Republican pessimism about their chances of retaking the Senate majority next year, even as the political environment is awfully favorable on paper to the party out of power.”

McClatchy: “A bill passed by the the Nevada Legislature that would move the Western state to the front of the country’s presidential primary schedule was met this week with opposition from GOP chairmen from all four early-voting states.”

“The four chairmen — Iowa’s Jeff Kaufmann, Nevada’s Michael McDonald, South Carolina’s Drew McKissick and New Hampshire’s Stephen Stepanek — said in a joint statement Tuesday the nominating contest that starts with Iowa and ends with the Palmetto State should stay as is.

Laxalt, however, didn’t respond to the AP’s request for a comment and hasn’t offered a timeframe for making an announcement. Republicans have yet to land a candidate to take on first-term Cortez Masto next year.

Vermont Gov. Phil Scott (R) signed legislation “that requires all registered voters in the state to receive mail-in ballots, an expansion of voting rights that counters a movement among Republicans in other states to restrict them,” the New York Times reports.

Rubio has tried to get ahead of Demings’ expected announcement by going on the attack: “None of them will admit to being a socialist. She probably won’t. But she certainly has voted for socialist things.” Like Social Security and Medicare.

Former Rep. Alan Grayson, whom longtime readers will know is one of my least favorite Democrats in America, appears to have made his challenge to GOP Sen. Marco Rubio official after he tweeted, “Grayson vs. Rubio – it’s on.  Watch to see how we’ll beat Marco Rubio. We can beat Rubio, and Keep the Senate Blue, if we work together. Join us!” Grayson’s tweet included a link to a fundraising page and an attack ad against Rubio that features the link to a bare-bones campaign website.

Grayson had already been raising money after filing for this seat back in March, and he previously lost the 2016 Democratic primary by a wide margin to former Rep. Patrick Murphy, who went on to lose to Rubio that fall.

ATLANTA MAYOR — “Kasim Reed, who fulfilled his lifelong goal by becoming mayor of Atlanta by the age of 40 and who then left City Hall eight years later under a cloud of controversy and investigation, has officially entered the wide-open mayor’s race,” the Atlanta Journal-Constitution reports.

“Idaho’s Republican lieutenant governor and gubernatorial candidate, Janice McGeachin, attended a gathering where she was endorsed in a glowing introductory speech by a rightwing militia leader,” as revealed in a video obtained by The Guardian.

Daily Beast: “Months after the Federal Election Commission notified several GOP state parties of major gaps in their 2020 fundraising and spending reports, the committees are correcting their numbers—but they still can’t explain why the discrepancies occurred.”

“The issue has raised new questions about possible abuse of a longstanding campaign finance loophole that allows wealthy megadonors to cut massive checks.”

New York Times: “For more than a decade, Democrats seeking more robust enforcement of election laws and transparency measures have been routinely routed at the FEC, the nation’s top campaign watchdog agency. They have complained bitterly that Republicans have weaponized the commission’s bipartisan structure — there are three commissioners allied with both parties — to turn it into a toothless, do-nothing bureau.”

“Now, the Democratic commissioners have stealthily begun to strike back by leveraging some of the same arcane rules that have stymied enforcement efforts for years — namely, that a bipartisan vote is necessary to do almost anything — to make the agency do even less. The goal appears to be to take a commission widely seen as dysfunctional and create further deadlock, compelling federal courts to fill the breach when it comes to policing federal election law.”