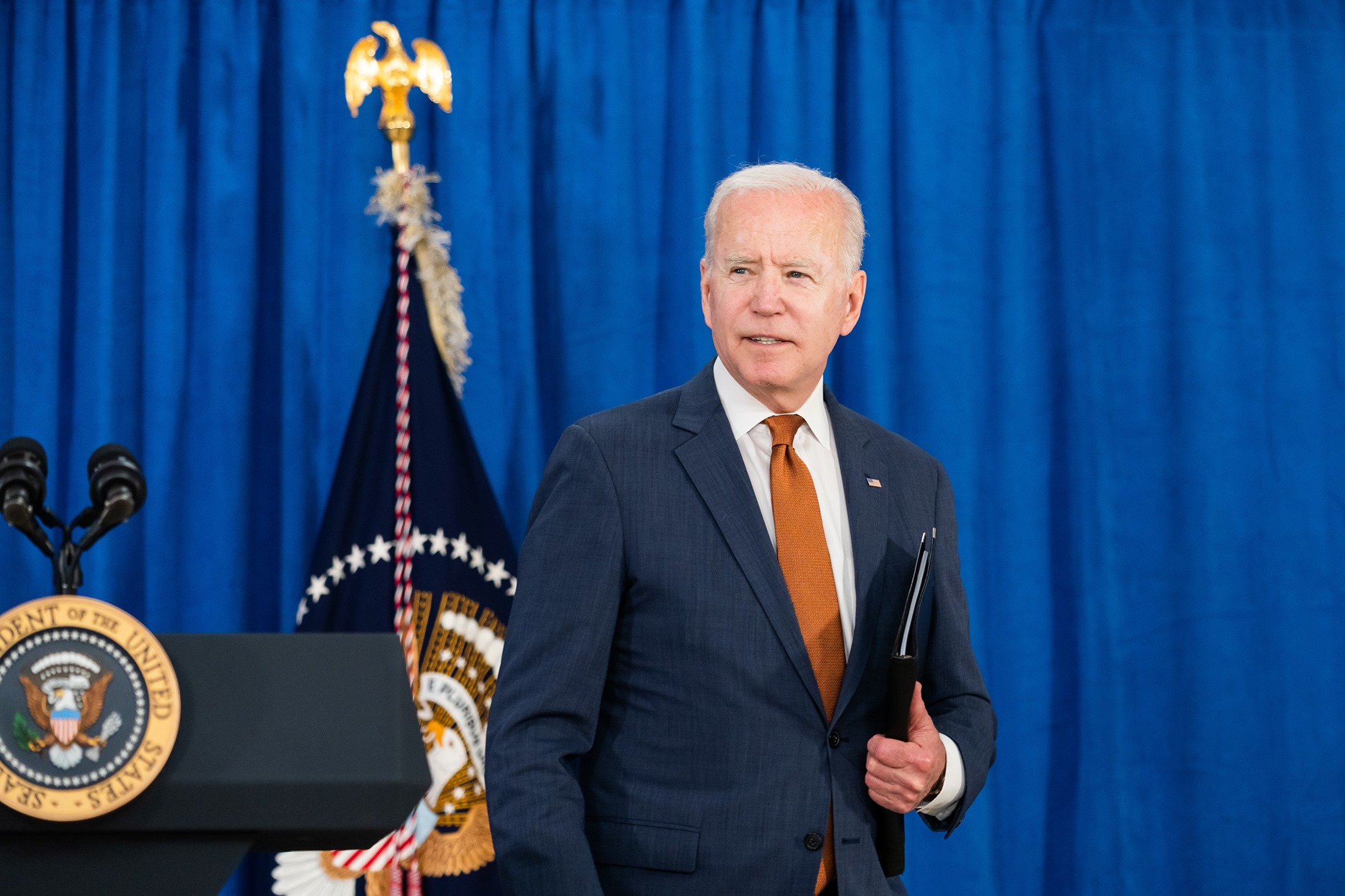 “The Justice Department said on Monday that it had recovered much of the ransom paid to hackers last month who shut down the computer systems of Colonial Pipeline,” the New York Times reports.

“Colonial had paid a ransom worth roughly $4.4 million in Bitcoin to the Russian hacking group DarkSide after it used ransomware… The seizure on Monday marked a first-of-its-kind effort by the Justice Department to hijack a cybercriminal group’s profits through a hack of its Bitcoin wallet.”

“The Justice Department said that it had seized 63.7 Bitcoins, currently valued at about $2.3 million. (The value of a Bitcoin has dropped over the past month.)”

“The Biden administration is pressing on with a controversial Justice Department defense of President Donald Trump in a defamation lawsuit brought by a writer who accused him of raping her at a New York City department store in the 1990s,” Politico reports.

“The brief filed on Monday night with a federal appeals court is an illustration of how administrations of sharply different political outlooks often flock to the same legal positions in court, even if it means seeming to excuse or immunize alleged bad conduct by their predecessors.”

“President Biden is cutting off infrastructure negotiations with a GOP group led by Sen. Shelley Moore Capito (R-WV) after weeks of talks failed to produce a deal,” The Hill reports. “He will instead move forward on discussions with a bipartisan group of senators.”

Sen. Bill Cassidy (R-LA) said he got a call from President Biden to discuss his infrastructure plans. This is notable because Cassidy is part of a bipartisan group of senators who have been trying to develop their own infrastructure plan — outside of the main effort spearheaded by Sen. Shelley Moore Capito (R-WV).

Biden’s call to Cassidy is an indication of several things:

That most likely means that Sen. Joe Manchin (D-WV) still hasn’t acquiesced to moving forward on an infrastructure bill without the Republicans.

“Sen. Joe Manchin’s defiant statement that he will not vote for a sweeping election reform bill nor vote to get rid of the filibuster has progressive groups and some Democratic lawmakers wondering when Senate Majority Leader Charles Schumer (D-N.Y.) will get tough with the West Virginia Democrat,” The Hill reports.

“Top federal intelligence agencies failed to adequately warn law enforcement officials before the Jan. 6 riot that pro-Trump extremists were threatening violence, including plans to ‘storm the Capitol,’ infiltrate its tunnel system and ‘bring guns,’ according to a new report by two Senate committees that outlines large-scale failures that contributed to the deadly assault,” the New York Times reports.

“An FBI memo on Jan. 5 warning of people traveling to Washington for ‘war’ at the Capitol never made its way to top law enforcement officials.”

Politico: “Capitol security officials tracking threats of violence on Jan. 6 saw social media posts as early as late December 2020 about a plot to breach the complex — complete with maps of the building’s tunnels and explicit threats of violence against members of Congress.”

French President Emmanuel Macron was slapped by a man at a receiving line after a high school visit.

“German Chancellor Angela Merkel’s Christian Democratic Union will remain the largest party in Saxony-Anhalt’s parliament, fending off a challenge from the far-right Alternative for Germany,” Deutsche Welle reports. “The state election was seen as a major political test for the CDU, as the AfD was originally projected to land an upset victory.”

Politico: “In the run-up to Sunday’s election in Saxony-Anhalt, polls had put Merkel’s CDU and the far-right Alternative for Germany (AfD) neck and neck. Yet the final result was not remotely close. The CDU’s result was nearly 10 percentage points higher than its score in the polls just a few days before the vote.”

Early results show Peru’s presidential runoff is too close to call, increasing the chances of a disputed election and calls for a recount, Bloomberg reports.

New York Times: “Just months before seeking re-election, Nicaragua’s president, Daniel Ortega, has brought his country a step away from becoming a one-party state, clamping down on the opposition to an extent not seen since the brutal suppression of anti-government protests in 2018.”

“The aggressive moves by Mr. Ortega present an unexpected challenge to the Biden administration, which has made strengthening democracy in Central America one of the pillars of its policy toward the region.”

Arizona Republic: “On Sunday, the largest elections in the history of Mexico will be held. But this electoral process has been tainted by the murder of at least 91 politicians — 36 of them candidates and aspiring candidates — from different parties, taking place since campaigning began in September 2020.”

“These homicides make this election the second most violent in the country’s history since 2000.”

Hundreds of alleged organized crime figures have been arrested around the world after using an encrypted messaging app that was secretly controlled by the FBI and Australian intelligence services, The Guardian reports.

The app allowed the agencies to look through millions of messages and has directly led to the arrest of suspects in Australia, Asia, South America, and the Middle East.

Julien Xavier Neals was confirmed as U.S. District Judge for the District of New Jersey on a Senate vote of 66 to 33, Axios reports.

“The new audio demonstrates how Giuliani aggressively cajoled the Ukrainians to do Trump’s bidding. And it undermines Trump’s oft-repeated assertion that ‘there was no quid pro quo’ where Zelensky could secure US government support if he did political favors for Trump.”

It’s not clear any amount of new evidence would have changed the outcome of Trump’s first impeachment trial.

ProPublica has obtained “a vast trove of Internal Revenue Service data on the tax returns of thousands of the nation’s wealthiest people, covering more than 15 years. The data provides an unprecedented look inside the financial lives of America’s titans, including Warren Buffett, Bill Gates, Rupert Murdoch and Mark Zuckerberg. It shows not just their income and taxes, but also their investments, stock trades, gambling winnings and even the results of audits.”

“Taken together, it demolishes the cornerstone myth of the American tax system: that everyone pays their fair share and the richest Americans pay the most. The IRS records show that the wealthiest can — perfectly legally — pay income taxes that are only a tiny fraction of the hundreds of millions, if not billions, their fortunes grow each year.”

Michael Bender writes in Frankly, We Did Win This Election that Donald Trump “held back on focusing his firepower on Joe Biden during the primary stage of the election because he was convinced that the Democratic Party was scheming to switch out now president Biden for a different candidate—such as Hillary Clinton or Michelle Obama—over the summer,” Vanity Fair reports.

The source of this conspiracy theory was Dick Morris, a former Clinton White House adviser who was “quietly advising Trump” last year.

“Dick Morris told Trump that Biden was too old and too prone to gaffes to be the nominee. Others said Fox News anchor Sean Hannity expressed concern that Biden would collapse under a sustained attack from Trump.”

Wall Street Journal: “A report on the origins of Covid-19 by a U.S. government national laboratory concluded that the hypothesis claiming the virus leaked from a Chinese lab in Wuhan is plausible and deserves further investigation.”

“The study was prepared in May 2020 by the Lawrence Livermore National Laboratory in California and was drawn on by the State Department when it conducted an inquiry into the pandemic’s origins during the final months of the Trump administration.”

“A tech vendor that provides constituent outreach services to dozens of House offices was the target of a ransomware attack,” Punchbowl News reports.

“House offices — nearly 60 from both parties — have been unable to retrieve some constituent information for several weeks while the vendor, iConstituent, tries to deal with the attack.”

“As they prepare to welcome President Biden, the simple fact that he regards Europe as an ally and NATO as a vital element of Western security is almost a revelation. Yet the wrenching experience of the last presidential administration has left scars that some experts say will not soon heal.”

In addition, press capacity limitations on the White House grounds, including on the North Lawn and in indoor press workspaces, will return to 100 percent.

Washington Post: “Russia’s premier business conference featured a panelist, Katerina Tikhonova, who was identified as the deputy director for the Institute for Mathematical Research of Complex Systems at Moscow State University. One significant detail was left out: She’s widely acknowledged outside official circles as President Vladimir Putin’s daughter.”

“The Russian leader has never publicly identified his children other than to say he has two daughters. That makes for an odd wink-and-nod scenario every time they appear. Everyone knows they are Putin’s children, but few dare say so and go against Kremlin policy. This dance could become increasingly tricky, however. Tikhonova and Putin’s other media-cited daughter, genetics researcher Maria Vorontsova, have gradually boosted their public profiles.”

“Barack Obama once mordantly quipped that Donald Trump’s appeal to white Americans was similar to the way Black Americans showed support for O.J. Simpson during his 1990s murder trial and subsequent acquittal, according to a new book by a former aide,” People magazine reports.

Said Obama: “Trump is for a lot of white people what O.J.’s acquittal was to a lot of Black folks—you know it’s wrong, but it feels good.”