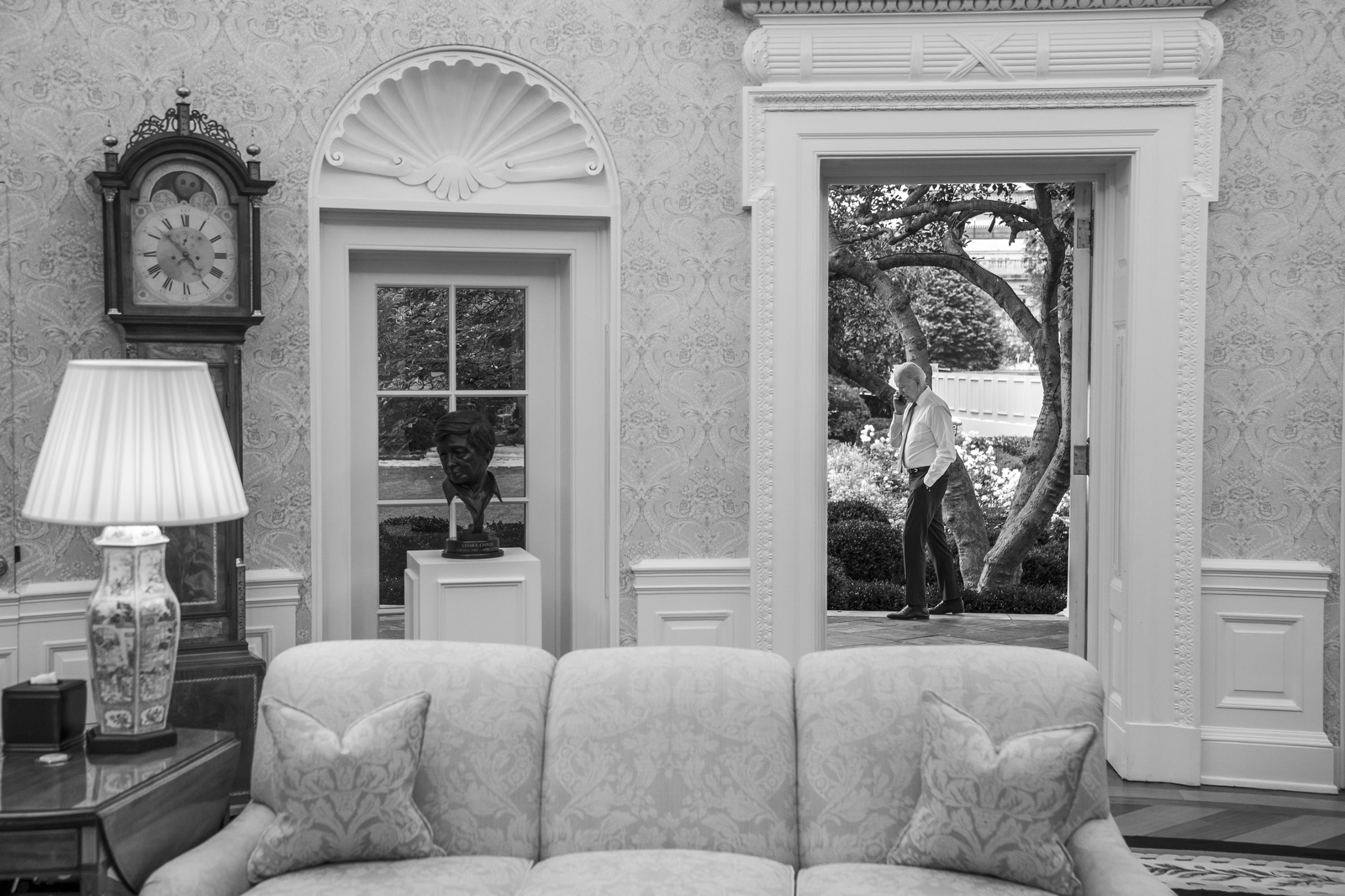 Rep. Jamaal Bowman (D-NY) blasted Sen. Joe Manchin (D-W.Va.) in a CNN interview as an obstructionist “doing everything in his power to stop democracy.”

Said Bowman: “Joe Manchin has become the new Mitch McConnell… Manchin is not pushing us closer to bipartisanship, he is doing the work of the Republican Party by being an obstructionist, just like they’ve been since the beginning of Biden’s presidency.”

“House progressives are getting fed up with efforts to accommodate Republican senators — and Joe Manchin. Look for them to start demanding swift action — and threatening payback,” Axios reports.

“The White House is under growing pressure to accede to the left’s demand to bust the filibuster. That rule effectively requires the support of 10 Republicans for most measures in this 50-50 Senate, rather than the simple majority that most Democrats want.”

Of course, Trump repeatedly urged Mitch McConnell to abolish the filibuster when Republicans had the Senate majority.

“My style is: I want to get shit done, OK? And I think, you know, being on TV and then having a gang of reporters around you is just fine, but it doesn’t help me get things done.”  — Sen. Jon Tester (D-MT), quoted by the Wall Street Journal.

Jonathan Bernstein: “By now, it’s not news that Republicans, using the filibuster and other foot-dragging techniques, are doing their best to obstruct Senate action. To some extent this is about their opposition to Democratic legislation. But it’s more than that. They’re also stretching out how much time is spent on executive-branch nominations they don’t have the votes to defeat, for example, and even delaying those that they don’t object to.”

“To be sure, if Democrats had the votes, they’d fight back by streamlining Senate procedures to reduce the time it takes to act; for that matter, they’d also eliminate the filibuster, or at least reduce the opportunity to use it. Since they don’t have the votes, the only other option to fight back against obstruction is to add more floor time by canceling district work periods.”

During an interview with Sen. Joe Manchin (D-WV) on Fox News Sunday, Chris Wallace asked: “If you were to keep the idea that maybe you would vote to kill the filibuster, wouldn’t that give Republicans an incentive to actually negotiate? Because ‘Old Joe Manchin’s out there and who knows what he’s gonna do.’ By taking it off the table, haven’t you empowered Republicans to be obstructionists?”

Manchin replied: “I don’t think so,” and pointed to the seven “brave” Senate Republicans who voted for a bipartisan Jan. 6 commission as evidence.

Associated Press: “Six months into the party’s hold on Washington … there is a gloomy uncertainty over their ability to make gains on campaign promises… Talks over an infrastructure package are teetering, though Biden is set to confer again Monday with the lead GOP negotiator, and an ambitious elections overhaul bill is essentially dead now that Sen. Joe Manchin announced his opposition Sunday.”

“The summer work period is traditionally among the busiest for Congress, but Democrats are growing wary because time is running out for Biden to negotiate a sweeping infrastructure package and other priorities are piling up undone. The days ahead are often seen as a last chance at legislating before the August recess and the start of campaigns for next year’s elections.”

Sen. Sheldon Whitehouse (D-RI) on Twitter : “OK, I’m now officially very anxious about climate legislation. I’ll admit I’m sensitive from the Obama climate abandonment, but I sense trouble. Climate has fallen out of the infrastructure discussion, as it took its bipartisanship detour. It may not return. So then what? I don’t see the preparatory work for a close Senate climate vote taking place in the administration. Why not marshal business support?”

He adds: “Corporate America is still completely AWOL if not worse on climate in Congress. All the major corporate trade associations suck — all of them. Groups and advocates are quarreling — My way! No, my way! We need everything, not ‘my thing.’ Oy. Oceans are a big part of climate and so far no significant oceans/coasts effort apparent in administration. Trying to repair that in Senate. We need planning, organizing and momentum. It’s not going to be easy. And it has to work. We are running out of time.”

“A unanimous Supreme Court ruled Monday that thousands of people living in the U.S. for humanitarian reasons are ineligible to apply to become permanent residents,” the AP reports.

“The Supreme Court declined Monday to consider the constitutionality of a federal law requiring men, but not women, to register for the military draft when they turn 18,” NBC News reports.

“As is its usual practice, the court didn’t say why it wouldn’t take the case. But three justices, Stephen Breyer, Sonia Sotomayor, and Brett Kavanaugh, said the court’s longstanding deference to Congress on military issues cautions against taking the case while lawmakers are considering whether to change the law.”

Energy Secretary Jennifer Granholm warned that the U.S. power grid is vulnerable to attacks and could be completely shut down by the nation’s adversaries, CNN reports.

Washington Post: “It can feel abstract: A group of organized but faceless criminals hijacking corporate computer systems and demanding millions of dollars in exchange for their safe return. But the impact of these ransomware attacks is increasingly, unavoidably, real for everyday people.”

Washington Post: “Finance ministers for seven of the most powerful nations in the world announced an accord that could reshape the tax obligations of multinational corporations around the world.”

“The deal is a major breakthrough for the Biden administration as it seeks to enact a floor on the taxes paid by corporations worldwide. Treasury Secretary Janet Yellen has been adamant that the U.S. needs to work with international counterparts to prevent nations from being played off each other by firms seeking lower tax obligations.”

New York Times: “With a narrowly divided Congress and resistance from Republicans and business groups mounting, closing the deal at home may be an even bigger challenge.”

“Persuading members of the Group of 7 advanced economies to agree on Saturday to a global minimum tax of at least 15 percent was intended to help the Biden administration win support for its U.S. tax increases.”

More than 300 million COVID-19 vaccines doses have now been administered in the U.S., Axios reports.

The latest CDC figures show that 41.9% of the U.S. population has been fully vaccinated against the coronavirus and 51.5% has received at least one dose.

Washington Post: “Plummeting vaccination rates have turned what officials hoped would be the ‘last mile’ of the coronavirus immunization campaign into a marathon … The United States is averaging fewer than 1 million shots per day, a decline of more than two-thirds from the peak of 3.4 million in April.”

“The slowdown is national — with every state down at least two-thirds from its peak — and particularly felt across the South and Midwest. … Recognizing the challenge — and the risk of missing the goal — Biden officials have mobilized thousands of organizations and volunteers.”

Politico: “Fewer than a quarter of Black Americans had received their first Covid-19 shot as of June 3.”

The head of Israel’s internal security service said that “extremely violent and inciting discourse” targeting the lawmakers who are seeking to end Benjamin Netanyahu’s 12-year tenure as prime minister could take a potentially lethal form — a grim echo of the warnings ahead of the Jan. 6 insurrection at the U.S. Capitol, the Washington Post reports.

“Iranian state actors are intensifying their disinformation campaign on social media to spread discord and anti-Semitic tropes inside the U.S.,” Time reports.

“Social media accounts tracked to troll farms run by the Iranian government have ramped up disinformation after several major events this year, including Biden’s effort to return the U.S. to the Iran nuclear deal, the April 14 announcement of the U.S. withdrawal from Afghanistan, the guilty verdict of Derek Chauvin on April 20, and the 11-day war between Israel and Hamas that started on May 10.”

Daily Beast: “Democrats understand that creating a special committee risks making an investigation into Jan. 6 a partisan circus. And Republicans are already arguing that any probe would turn into a political hit job designed to hurt Donald Trump and the GOP ahead of the 2022 midterm elections.”

“It’s just that Democrats don’t have many other good options.”

Insofar as the GOP’s goal with the Benghazi hearings was to deny Hillary Clinton the presidency, this model arguably works.

Rep. Mo Brooks (R-AL) tweeted photos of his computer screen, including a sticker at the bottom of the screen that included his email password.

“An Oregon state lawmaker who has been charged after he allegedly allowed protesters into the closed state Capitol building during a debate over Covid-19 restrictions is seen in a new video appearing to give insights into how to access the Capitol, which led to a scuffle between protesters and police,” CNN reports.

Oregon House Speaker Tina Kotek (D) “wants to expel a lawmaker who allowed violent protesters into the state Capitol in December. The House could vote as early as Monday on her resolution,” the Associated Press reports.

“As lawmakers met in emergency session on Dec. 21 to deal with economic fallout from the coronavirus pandemic, far-right rioters entered the building. They sprayed chemical irritants at police who finally expelled them.”

Featured Photo: President Joe Biden makes a call on Wednesday, May 26, 2021, outside the Oval Office of the White House. (Official White House Photo by Adam Schultz)