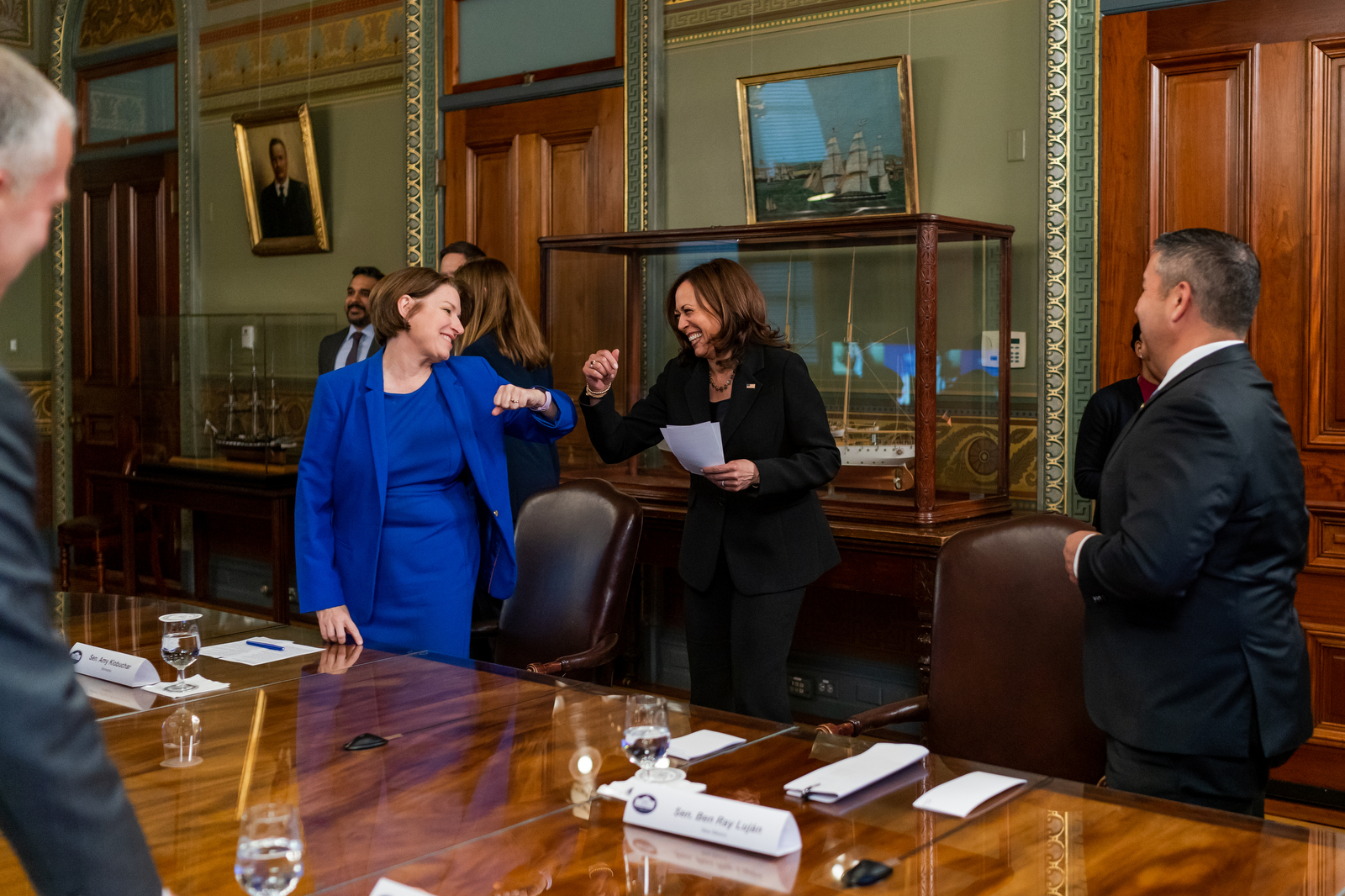 National Review: “Republicans swept key races for mayor in Texas on Saturday, setting back Democratic hopes that the state’s urban areas will deliver statewide majorities for them in the future. Most shocking: In McAllen, Texas, a border city of 150,000 people of which 85 percent are Hispanic, Republicans elected their first mayor ever.”

A new survey finds the United States’ reputation as the leading global power has suffered in France and Germany because of Washington’s handling of the COVID-19 pandemic that has killed nearly 600,000 Americans.

From the survey: “The first three months of the Biden administration have not affected French and German views of U.S. influence in the world.”

TEXAS GOVERNOR / 32ND CD — Allen West (R), who resigned his position as Texas GOP chairman and has been most frequently discussed as a potential challenger to Gov. Greg Abbott (R), declined to say whether he was eyeing any particular statewide office, the Texas Tribune reports. But he did raise the prospect he could challenge Rep. Colin Allred (D). Said West: “There’s a guy in Texas 32 I really don’t care for being my congressional representative.”

West, who recently spoke at a QAnon-affiliated event, acknowledged Friday he was thinking about joining the Republican primary to take on Gov. Greg Abbott. Donald Trump threw his support behind the incumbent on Tuesday, but West insisted that wouldn’t deter him. Abbott currently faces an intra-party challenge from former state Sen. Don Huffines, but the field could get larger no matter what West ends up doing: The Dallas News relays that state Agriculture Commissioner Sid Miller “could announce his campaign in the coming days.” (Miller also addressed that QAnon-aligned confab.)

ARIZONA “AUDIT” — Conservative radio host Mike Broomhead, a staple on the Phoenix airwaves, has turned against the Arizona GOP “audit” of the 2020 election results, the Los Angeles Times reports.

He added: “No matter where you stand, the one thing we can all agree on is it has put a great big wedge in this community. That to me is the worst part of this. It’s one more reason for us to stand on opposite sides of the streets and complain about each other.”

GEORGIA U.S. SENATOR — “If Herschel Walker wanted to fire up Republicans about a potential U.S. Senate run, the GOP convention this weekend in Jekyll Island would have been the perfect setting,” the Atlanta Journal Constitution reports.

“Instead, the UGA football great skipped the gathering.

State Agriculture Commissioner Gary Black announced Friday that he would challenge Democratic Sen. Raphael Warnock, a move that makes him the first elected official to enter the Republican primary.

Black badly lost his first run for this office in the 2006 general election but prevailed four years later, and his 53-47 victory in 2018 was the best showing of the entire GOP statewide ticket. The local NBC affiliate 11 Alive, though, describes him as someone who has “most typically been quiet politically” during his decade in office. The Atlanta Journal-Constitution adds that while Black, who has a family farm in the northeastern part of the state, “has painstakingly built a base of support in rural Georgia,” he isn’t as prominent in the Atlanta area.

Black joins businessman Kelvin King and banking executive Latham Saddler in the primary, but more prominent Republicans have held off on running while Trump’s choice, former NFL running back Herschel Walker, mulls whether he should relocate from Texas to campaign for the Senate. Black insisted Friday, though, that he’d remain in the race even if Walker runs with Trump’s backing.

But the dynamics are in play now for a little Shakespearean drama that could pit Gov. Pete Ricketts (R) against his Republican predecessor with the possibility that former President Donald Trump might suddenly come barging on stage opposing both of them.

ILLINOIS GOVERNOR — While Democratic Gov. J.B. Pritzker, who poured $35 million of his own money into his campaign back in March, has appeared all but certain to seek a second term, he said Thursday he hadn’t made up his mind. The incumbent told the Chicago PBS affiliate WTTW that he’d need to discuss his plans with his family, adding, “There have been a lot of unfair, you know, accusations against my daughter. These are all things that we weigh in the process of making a decision.” Pritzker added he’d make his choice “reasonably shortly.”

MARYLAND GOVERNOR — The first survey we’ve seen this year of the still-forming Democratic primary comes from Gonzales Research on behalf of state Sen. Douglas Peters, who has not taken sides yet; Maryland Matters writes that Peters “pays to survey Democratic voters every four years well before the statewide primary.”

Gonzales shows former Prince George’s County Executive Rushern Baker, who took second in the 2018 primary, leading state Comptroller Peter Franchot 22-18. Former Democratic National Committee chairman Tom Perez is in third with 10%, ex-Attorney General Doug Gansler is at 4%, while other declared or potential contenders are further back. Franchot and Gansler are both running, while Perez reportedly will decide around July 4.

Baker, meanwhile, sent conflicting signals back in April about whether he was in or still merely thinking about another campaign, and he doesn’t appear to have said anything since then to clear things up. For what it’s worth, the “Baker for Governor” Facebook page still hasn’t been updated since 2018, when Baker last ran, and his website, rushernbaker.com, is unavailable.

SOUTH CAROLINA GOVERNOR — While The State reported back in January that former state Rep. Mandy Powers Norrell was considering entering the Democratic primary, the 2018 nominee for lieutenant governor made it clear Thursday that she was backing state Sen. Mia McLeod instead.

VIRGINIA GOVERNOR — Roanoke College is out with the first poll we’ve seen since April for Tuesday’s Democratic primary, and it finds former Gov. Terry McAuliffe in very strong shape. McAuliffe leads former Del. Jennifer Carroll Foy by a wide 49-11 margin, while state Sen. Jennifer McClellan is in third with 9%. The winner will take on wealthy Republican Glenn Youngkin, who prevailed at last month’s party nominating convention and has self-funded most of his campaign so far.

Attorney General Mark Herring leads Del. Jay Jones by a large 50-20 margin in what has become a very expensive fight to keep his job. The Republican firm Medium Buying reported Friday that Herring and his allies at the Democratic Attorneys General Association, a group that doesn’t often spend much in primaries, have together outspent Jones $1.4 million to $1.2 million. The winner will go up against Republican Jason Miyares in the fall.

Hayes Brown: “No matter how you feel about them, the Bush family has been one of the most influential clans in modern U.S. history. Like most political families in the US, the Bushes have stayed loyal to one party — the Republican Party, in their case.”

“But despite an unbroken string of service — including two presidencies, two governorships and a combined 14 years in Congress — the Republican Party has not always returned the favor.”

“Now, the youngest member of the line has decided his political future requires embracing former President Donald Trump, a man who’s gone out of his way to reject and scorn everything his family has done.”

FLORIDA 10TH CD — Orange County Mayor Jerry Demings announced Friday that he would run for re-election to his current post and not seek another office in 2022. Demings was mentioned as a possible candidate to replace his wife, Rep. Val Demings, in this safely blue Orlando-based district now that she’s seeking the Democratic nomination for Senate next year.