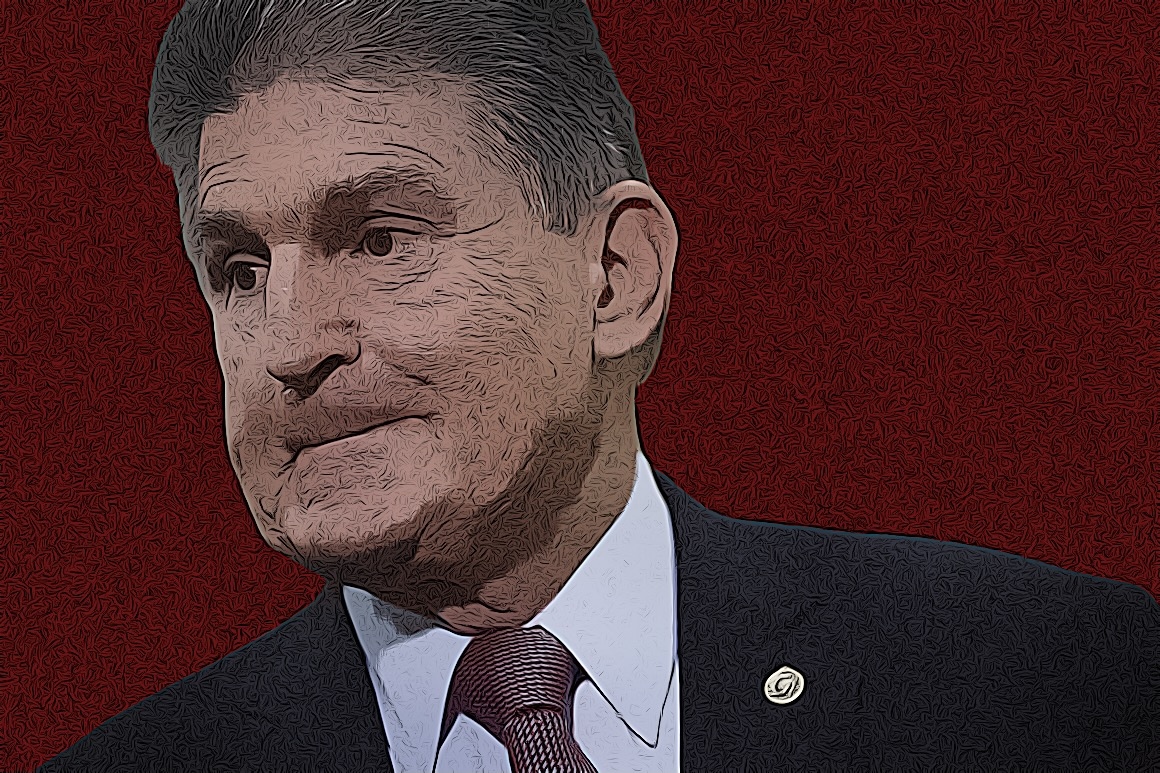 Sen. Joe Manchin (D-WV) writes in the Charleston Gazette-Mail that he will vote against a sweeping election reform overhaul bill, putting the fate of the legislation in jeopardy in the evenly split Senate.

Said Manchin: “I believe that partisan voting legislation will destroy the already weakening blinds of our democracy… The truth, I would argue, is that voting and election reform that is done in a partisan manner will all but ensure partisan divisions continue to deepen.”

New York Times: “Schumer said he intended to bring the filibuster showdown to a head beginning next week, by forcing votes on a series of measures that Republicans oppose, including one that was blocked by a Republican filibuster in 2014 that seeks to ensure that women and men receive the same pay for equal work.”

“Mr. Schumer hinted that he could also bring forward legislation on gay rights and gun safety. Most immediately, he promised a vote before the end of June on a sweeping voting rights bill that Democrats say is needed to counter new Republican-led voting restrictions being enacted in states around the nation.

“The idea is to show Democrats refusing to change the filibuster rules that Republicans led by Senator Mitch McConnell, Republican of Kentucky and the minority leader, are going to stand in the way of legislation that has widespread support, and that the only way to win their adoption is by overturning the rules.”

“In Donald Trump’s final weeks in office, Mark Meadows, his chief of staff, repeatedly pushed the Justice Department to investigate unfounded conspiracy theories about the 2020 presidential election,” according to newly uncovered emails reviewed by the New York Times.

“In five emails sent during the last week of December and early January, Mr. Meadows asked Jeffrey Rosen, then the acting attorney general, to examine debunked claims of election fraud in New Mexico and an array of baseless conspiracies that held that Mr. Trump had been the actual victor. That included a fantastical theory that people in Italy had used military technology and satellites to remotely tamper with voting machines in the United States and switch votes for Mr. Trump to votes for Joseph Biden.”

“About 31 million Americans now have health-care coverage through the Affordable Care Act, the White House announced Saturday, setting a record since the law, colloquially known as ‘Obamacare,’ was enacted in 2010 under President Barack Obama,” the Washington Post reports.

To commemorate the milestone, President Biden spoke with Obama in Zoom conversation that was taped and released by the White House.

“A decade later, Joe Biden campaigned on making the public option a reality, but so far, he’s done little to get Congress to enact one. Instead of outrage, influential progressives seem to be OK watching the promise go unfilled, preferring to pursue universal health care through other means, like expanding Medicare eligibility.”

“U.S. District Judge Roger Benitez of San Diego ruled that the state’s definition of illegal military-style rifles unlawfully deprives law-abiding Californians of weapons commonly allowed in most other states and by the U.S. Supreme Court,” the AP reports.

“Former White House counsel Donald McGahn detailed for the House Judiciary Committee on Friday how former president Donald Trump attempted to stymie a federal probe of Russian interference in the 2016 election — bombshell revelations that might once have fueled additional impeachment charges,” the Washington Post reports.

A transcript of the interview is not expected to be made public before next week.

“The Justice Department said that it no longer will secretly obtain reporters’ records during leak investigations, a policy shift that abandons a practice decried by news organizations and press freedom groups,” the AP reports.

“Donald Trump and his Republican allies have spent the past few weeks trying to rewrite or distort the history of the pandemic, attempting with renewed vigor to villainize Anthony Fauci while lionizing the former president for what they portray as heroic foresight and underappreciated efforts to combat the deadly virus,” the Washington Post reports.

Politico: “The attacks took on a whole new level of vitriol this week, to the point that one social media analysis described it as highly misleading and at least one platform pulled down some posts, citing false content.

“It all stemmed from a tranche of Fauci’s emails that were published as part of a Freedom of Information Act request filed by various news outlets. … Reddit and Facebook lit up with a fresh round of Fauci attacks, some of which called him a war criminal.”

When President Biden was asked today if he still had confidence in Fauci, Biden turned around to say: “Yes, I am very confident in Dr. Fauci.”

“Newly released emails sent to and from Arizona state senators reveal that President Donald Trump and his lawyer Rudy Giuliani reached out personally to urge GOP officials there to move forward with a partisan recount of the 2020 election, despite a lack of evidence of widespread fraud or other issues,” the Washington Post reports.

“Hundreds of pages of emails related to the GOP-ordered audit underway in Maricopa County were obtained by the nonprofit legal watchdog group American Oversight through a records request under the Freedom of Information Act.”

Corey Lewandowski said he had spoken to Donald Trump “dozens, if not more than 100 times since he has left the White House and I have never had that conversation about him being reinstated,” The Guardian reports.

Jason Miller told Newsmax that Donald Trump will not be “reinstated by August,” as the former president has reportedly been telling allies.  Said Miller: “It’s not true.”

Playbook: “In private, many elected Republicans will confess that they are not looking forward to Trump’s return to the campaign trail. They worry about him turning off suburban voters and that his speeches will distract from their message. They say they’re ready to move on from rehashing the 2020 election and repeating the Big Lie — though I have a hunch that Trump will raise the topic at campaign stops.”

New York Times: “The relationship between American businesses and their employees is undergoing a profound shift: For the first time in a generation, workers are gaining the upper hand.”

“Up and down the wage scale, companies are becoming more willing to pay a little more, to train workers, to take chances on people without traditional qualifications, and to show greater flexibility in where and how people work. The erosion of employer power … could persist for years.”

“One of the most senior officials in the Trump Organization has testified before a special grand jury empaneled by the Manhattan District Attorney’s office to hear evidence against former President Donald Trump and his company,” ABC News reports.

“Jeff McConney, who serves as a senior vice president and controller for the Trump Organization, is the first employee of the former president’s company called to testify, the sources said, and his testimony is a sign that prosecutors have burrowed deep into the company’s finances.”

“President Joe Biden’s infrastructure talks with Republicans will continue Monday as the White House considers whether it should abandon hopes for a bipartisan deal,” CNBC reports.

Jim VandeHei argues the days of the Republican Party of old are gone.

“Look at who gets attention to this day. It’s Tucker Carlson, it’s Ben Shapiro, Mike Pence, it’s Donald Trump… The party does not care fundamentally about deficits. I don’t even know that the vast majority of what you would call the base of the party right now cares that much about ideology. It’s much more an identity statement, a cultural statement.”

“Everyone assumed Jan. 6 was this watershed moment… Historically insane, what happened. And yet almost instantly, at a moment where you would think it’s unthinkable, everyone snaps back like that — not just to the norm, but to the Trump norm.”

“Passing new election laws has been one of the top priorities for Republican state legislators in 2021 — and they are working from similar playbooks to tighten or restrict the old policies even in states with very different election systems,” Politico reports.

“Months after Donald Trump left the Oval Office, Republicans at the state and local level are cementing their loyalty to the one-term president, assuring that Trump will remain the party’s future despite his November defeat,” USA Today reports.

“From espousing his discredited election conspiracy theories to threatening to secede, state and local officials are increasingly leaving aside community issues to reflect Trump’s ongoing hold of the national GOP.”

“The extension of Trump’s dominance in the GOP down to local leaders compounds the party’s consolidation behind an uncompromisingly right-wing, grievance-oriented politics that centers conspiracy theories and threats to democratic legitimacy.”

Washington Post: “In remarks from Delaware about Friday’s jobs report, President Biden said that it ‘makes sense’ for the $300 per week benefit to end in September, marking the first time the administration has explicitly endorsed their expiration.”