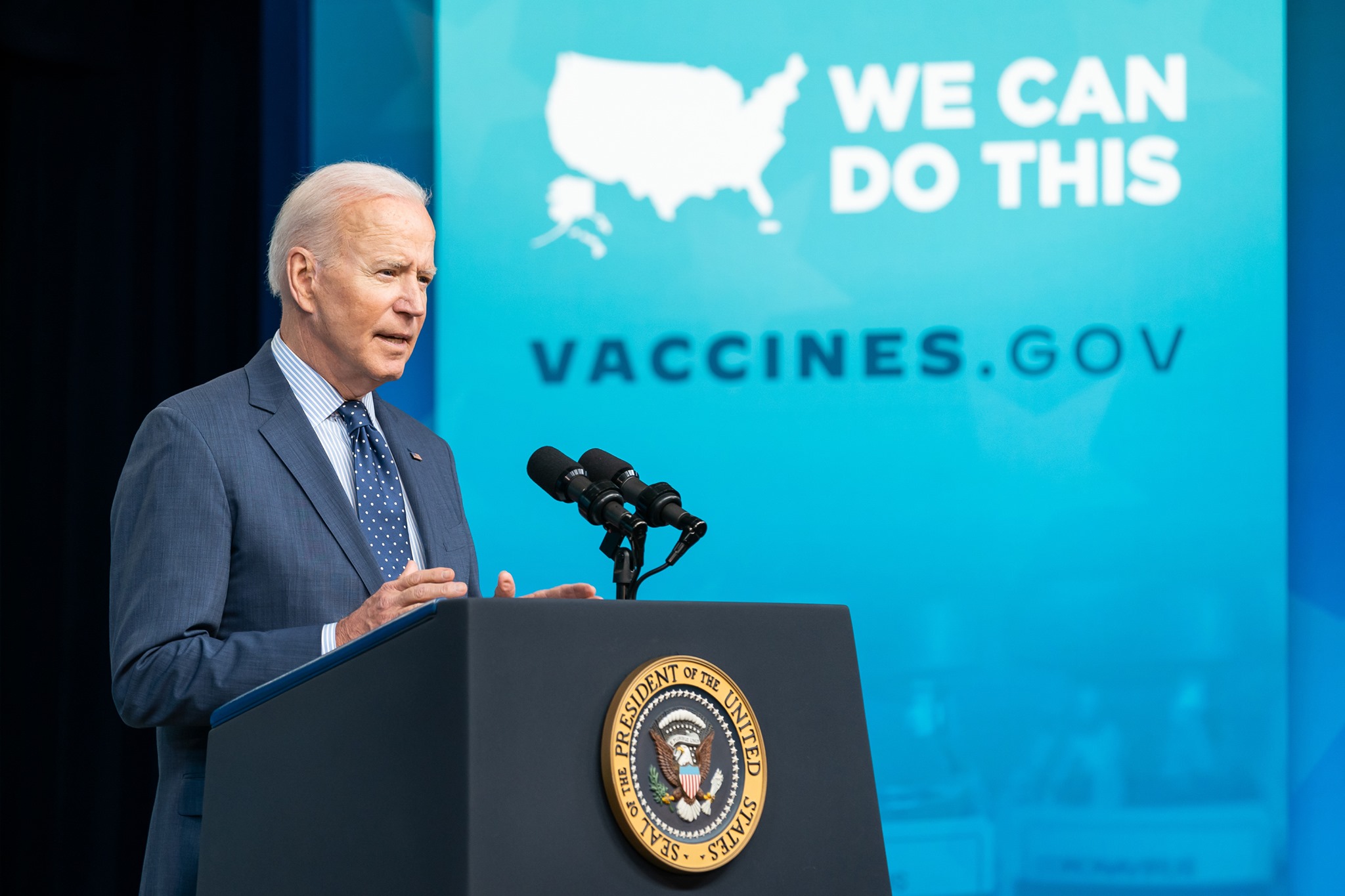 President Joe Biden outlined new efforts to make it easier than ever for Americans to get their coronavirus vaccinations and promised a much better summer ahead, CBS News reports.

Said Biden: “America is headed into a summer dramatically different from last year’s summer. A summer of freedom, a summer of joy, a summer of get-togethers and celebrations. An all-American summer that this country deserves after a long, long dark winter that we’ve all endured.”

Washington Post: “President Biden will announce an initiative Wednesday to recruit 1,000 Black-owned barbershops and beauty salons across the country to boost coronavirus vaccinations and outreach in communities of color, one of several measures the administration plans to ramp up immunizations ahead of the July Fourth holiday.”

Former President Donald Trump’s blog — a webpage where he shared statements after larger social media companies banned him from their platforms — has been permanently shut down, CNBC reports.

Said spokesman Jason Miller: “It will not be returning.”

The site was launched last month as a “communications platform.”

According to Maggie Haberman and Byron York, ex-President Trump is telling associates he expects to be reinstalled in the White House in a coup some time this summer. This is best seen as an open invitation and encouragement of more January 6th style political violence focused on the late summer of 2021.

An adviser told the Washington Post that former President Trump wanted to open a new “platform” and didn’t like that this platform was being mocked and had so few readers.  The New York Times says Trump “had become frustrated after hearing from friends that the site was getting little traffic and making him look small and irrelevant.”

“Israeli opposition parties on Wednesday reached a coalition agreement to form a government and oust Benjamin Netanyahu, the longest-serving prime minister in Israeli history and a dominant figure who has pushed his nation’s politics to the right,” the New York Times reports.

“The new coalition is an unusual and awkward alliance between eight political parties from a diverse array of ideologies, from the left to the far right.”

“The answer is yes, but it’s not that easy, and it may impact what happens to the American Jobs Plan and American Family Plan this summer.”

“The majority party — in this case, the Democrats — cannot use reconciliation simply to avoid the regular legislative process, and there have to be reasons beyond political expediency for triggering the majority threshold, such as an economic downturn.”

“Democratic leaders and activists are urgently stepping up pressure on Sen. Joe Manchin to support legislation to fight Republican-led voting restrictions across the country, with party officials increasingly concluding that the battle over voting rights could come down to what the centrist Democrat from West Virginia does,” the Washington Post reports.

John Avlon looks at filibuster reforms which would “put the pressure on the obstructionists rather than the senators trying to… cross partisan lines.”

Sen. Kyrsten Sinema (D-AZ) told the Arizona Republic that she missed a procedural vote on a bill to establish a commission to study the Jan. 6 Capitol insurrection because she had a “family matter.”

She did not elaborate.

“The reality is that when you have a system that is not working effectively — and I would think that most would agree that the Senate is not a particularly well-oiled machine, right? The way to fix that is to fix your behavior, not to eliminate the rules or change the rules, but to change the behavior.” — Sen. Kyrsten Sinema (D-AZ), quoted by the Arizona Republic, on the “false choice” between getting rid of the filibuster and passing legislation.

“I hear all the folks on TV saying why doesn’t Biden get this done? Well because Biden only has a majority of effectively four votes in the House and a tie in the Senate, with two members of the Senate who vote more with my Republican friends.” — President Joe Biden, quoted by CBS News.

NBC News: “Democrats have the power to change those rules but lack the unanimity it’d require of the 50-member caucus. And when the Senate returns from a weeklong Memorial Day recess, Schumer appears ready to test his members.”

“He promised votes on the Paycheck Fairness Act and a bill to protect voting rights — both have viable paths to a majority vote but not 60 to defeat a filibuster. He said LGBTQ rights and gun legislation may also come up.”

“Anheuser-Busch, the national brewer that produces Budweiser, announced Wednesday it will give away free alcohol if the nation reaches President Joe Biden’s goal to have 70% of US adults receive at least one dose of the vaccine by July 4,” CNN reports.

David Leonhardt: “First, new Covid cases have continued to decline at virtually the same rate as during the month before the CDC announcement, which came on May 13… Overall, daily new cases have fallen by almost 75 percent since mid-April and by more than 90 percent from the peak in January.”

“On the other hand, the CDC’s change has had a noticeable effect on behavior in a positive way… For the previous month, the number of daily shots in the U.S. had been falling, as the country began to run out of adults who were eager to be vaccinated. Within a few days of the mask announcement, the decline leveled off.”

“With the coronavirus pandemic receding for every vaccine that reaches an arm, the push by some employers to get people back into offices is clashing with workers who’ve embraced remote work as the new normal,” Bloomberg reports.

“While companies from Google to Ford Motor Co. and Citigroup Inc. have promised greater flexibility, many chief executives have publicly extolled the importance of being in offices.”

“But legions of employees aren’t so sure. If anything, the past year has proved that lots of work can be done from anywhere, sans lengthy commutes on crowded trains or highways. Some people have moved. Others have lingering worries about the virus and vaccine-hesitant colleagues.”

Speaker Nancy Pelosi “is ruling out a presidential commission to study the Jan. 6 insurrection at the Capitol, telling House Democrats on Tuesday that having President Joe Biden appoint a panel is unworkable even after the Senate blocked an independent probe last week,” the Associated Press reports.

“Pelosi laid out possible next steps after Friday’s Senate vote… The first option is to give the Senate another chance to vote on the commission.”

“The other options involve the House investigating the attack, meaning the probes would be inherently partisan.”

“President Biden vowed to ramp up efforts to fight voter suppression laws Tuesday as he commemorated the 100th anniversary of the massacre here that ravaged a once-prosperous Black business district and neighborhood,” the Washington Post reports.

“Biden announced he was tapping Vice President Harris to lead the administration’s work to protect voting rights and assailed the Republican-led efforts to restrict voting rights in states across the country.”

Said Biden: “This sacred right is under assault with incredible intensity like I’ve never seen.”

It will be interesting to see if putting Harris in charge of selling HR1 will help make the sale to Joe Manchin. She’s had to mend fences with him before.

Associated Press: “More than three dozen members and associates across both the Proud Boys and the Oath Keepers have been charged with crimes. Some local chapters cut ties with national leadership in the weeks after the deadly siege. The Proud Boys’ chairman called for a pause in the rallies that often have led to clashes with anti-fascist activists. And one Oath Keeper has agreed to cooperate against others charged in the riot.”

“A man who wore goggles and carried a Trump flag into the Senate chamber on January 6 as the US Capitol was overrun with rioters became the second riot defendant to plead guilty on Wednesday, setting the tone for what may come as more of the hundreds of cases head toward being resolved in court,” CNN reports.

“He faces a likely 15 to 21 months in prison, and could face thousands of dollars in fines as well, according to his plea hearing on Wednesday.”

“In the weeks since the President asked her to take charge of immigration from Central America, Vice President Kamala Harris and her staff have sought to make one thing clear: She does not manage the southern border,” CNN reports.

“Two White House officials familiar with the dynamic said Harris and her aides have emphasized internally that they want to focus on conditions in Central America that push migrants to the US southern border, as President Joe Biden tasked her to do. A record number of unaccompanied children crossed into the US this spring, and the throngs of desperate minors present a heart-rending problem as well as a political one.”

“Florida Gov. Ron DeSantis is on a collision course with one of the state’s biggest industries over a law he signed banning businesses from asking customers whether they’ve been vaccinated against Covid-19,” NBC News reports.

“Cruise ship operators, who sail out of Florida’s large southern ports, say the order will make it make it harder for them to safely return to the seas, possibly imperiling a major economic driver in the state.”

Catherine Rampell: “The administration projected strong growth this year and next — 5.2 percent and 4.3 percent, respectively — as the economy bounces back from the pandemic recession.”

“But over the rest of the decade, it estimated the economy will grow only about 1.8 to 2.2 percent each year. That’s roughly in line with forecasts from the Congressional Budget Office and the Federal Reserve.”

“To Republicans, this judicious forecast — this failure to grossly exaggerate or lie — is somehow damning.”

“The U.S. is about to pivot from hoarding vaccines to sharing them globally, and countries around the world are trying to secure their places in line,” Axios reports.

“President Biden has promised to donate 80 million doses by the end of June. With domestic demand waning, he’ll soon be able to offer far more. But the White House hasn’t said how it will distribute the initial 80 million, or when it will feel comfortable truly opening its supply to the world.”

Richard Haass: “For all the talk about the ‘international community,’ the pandemic has exposed the absence of one. The failure to produce and equitably distribute a sufficient number of vaccines worldwide is a scandal. The demand is there; what remains is the will to match it with the necessary supply.”

McKay Coppins: “In the conservative book world, nothing is supposed to set off a gold rush like a new Democratic president. Ever since Bill Clinton inspired a wave of right-wing best sellers in the ’90s, publishing houses that cater to Republican readers have learned to make the most of a new villain in the Oval Office, churning out polemics and exposés that aim to capitalize on fear of the new president.”

“Unless, that is, the new president is Joe Biden.”

“Former president Donald Trump’s company has again hired a broker to sell the lease to its D.C. hotel, according to two people familiar with the discussions, a second attempt to unload the property after the pandemic thwarted a previous effort,” the Washington Post reports.