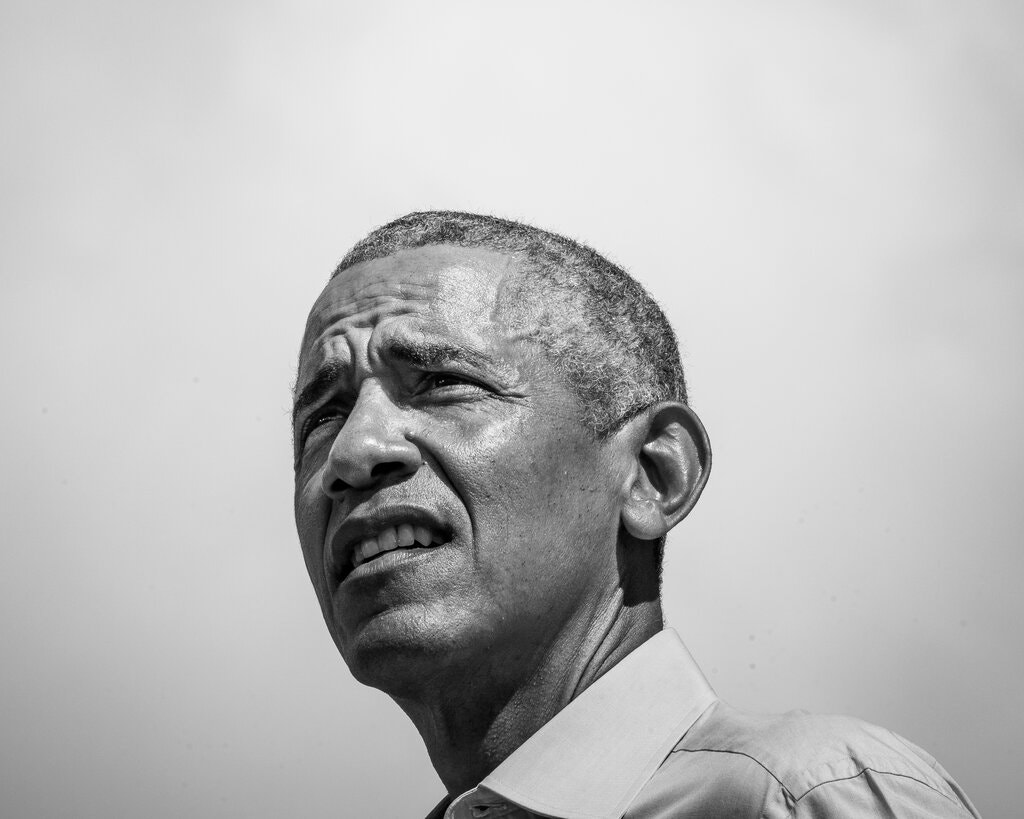 Ron Brownstein: “For most Americans, the unofficial arrival of summer with Memorial Day is a cause for celebration. But for newly elected presidents, it’s more often been a reason for dread. Sagging job approval ratings, unanticipated challenges at home and abroad and, above all, diminishing legislative momentum have been hallmarks of the first summer in office for recent presidents.”

“The dynamic has afflicted presidents of both parties. But the problem was especially acute for Bill Clinton and Barack Obama, the last two Democratic presidents, who arrived in Washington, like Biden, with extremely ambitious legislative wish lists.”

Nate Silver notes that President Joe Biden’s average approval rating has never been below 52.5% or above 55.0%.

Barack Obama on the Ezra Klein Show:  “I could go to the fish fry, or the V.F.W. hall, or all these other venues, and just talk to people. And they didn’t have any preconceptions about what I believed. They could just take me at face value. If I went into those same places now — or if any Democratic who’s campaigning goes in those places now — almost all news is from either Fox News, Sinclair news stations, talk radio, or some Facebook page. And trying to penetrate that is really difficult.”

“It’s not that the people in these communities have changed. It’s that if that’s what you are being fed, day in and day out, then you’re going to come to every conversation with a certain set of predispositions that are really hard to break through. And that is one of the biggest challenges I think we face.”

ARIZONA GOVERNOR — Arizona Secretary of State Katie Hobbs (D), “who gained national attention for her stalwart defense of the state’s electoral system in the aftermath of the 2020 presidential election, announced on Wednesday that she was running for governor, portraying herself as a pragmatic leader who does not back down in the face of criticism and threats,” the New York Times reports.

Arizona Republic: “And in launching her campaign this week, Hobbs has the backdrop of an unprecedented and behind-schedule effort by the state Senate to seize and recount each of Maricopa County’s ballots along with the Legislature’s two-week recess as Republican leaders try to wrangle their restive caucuses into a budget agreement.”

RNC Chair Ronna McDaniel excoriated the Commission on Presidential Debates in a letter, threatening to advise any future Republican nominee against participating in general election presidential debates unless significant changes are made to the commission, CNN reports.

Trump used the opportunity to take a shot at Sen. Bill Cassidy (R-LA): “Unlike Louisiana’s other Senator, Bill Cassidy, who used my name in ads and all over the place in order to get re-elected, and then went ‘stupid,’ John Kennedy is the real deal—a brilliant and highly educated man.”

MASSACHUSETTS GOVERNOR — “Fresh off a trip to Tennessee for Republican Governors Association meetings, Gov. Charlie Baker (R-MA) is still not yet saying if he’ll run for re-election in 2022,” Mass Live reports. “Earlier this week, people close to Baker told the News Service his re-engagement with the RGA could be a sign that he is leaning in the direction of running for a third term but that he had yet to share a final decision with top aides.”

ALABAMA GOVERNOR — Alabama Gov. Kay Ivey (R) “said she would seek a second full term as governor of Alabama in an announcement that stressed her reaction to the COVID-19 outbreak and pro-business policies,” the Montgomery Advertiser reports. “Ivey’s announcement did not come as a surprise, but will almost certainly clear the field of Republican challengers.”

ARIZONA “AUDIT” — “The Arizona Republican Party, along with other Trump-leaning groups, has used the state Senate’s ongoing ballot review as a way to raise funds for their causes and candidates,” the Arizona Republic reports.

“Through April, the state Republican party took in $897,000 for its federal activities… (and) another $335,000 for state activities through March.”

“In one instance, a software update caused so many errors that the company handling the recount abandoned the update and went back to the old software. In other instances, prohibited items including cellphones and pens with black or blue ink were allowed onto the counting floor.”

FLORIDA GOVERNOR — “Florida Gov. Ron DeSantis (R) raised more than $5.1 million in May with six days still left in the month, according to his campaign committee,” Mediaite reports. “Friends of Ron DeSantis reported raking that figure in from contributions during the first 25 days of the month. The group raised a whopping $14 million in April, ending that month with $31.6 million in cash on hand.”

“The figure is about one-third of the combined total spent by DeSantis and his 2018 opponent, Andrew Gillum, which clocked in at about $100 million.”

State Agriculture Commissioner Nikki Fried, who is the only Democrat holding statewide office in Florida, announced her long-anticipated campaign against Republican Gov. Ron DeSantis on Tuesday. The only other major Democratic contender challenging the incumbent is Rep. Charlie Crist, who won the governorship as a Republican in 2006 and, following his party switch, narrowly lost the 2014 general election to retake it. Other Democrats, including state Sen. Annette Taddeo, could also join the primary.

Fried herself pulled off an unexpected victory in 2018 when she edged out Republican Matt Caldwell 50.04-49.96—a margin of fewer than 7,000 votes out of more than 8 million cast—which made her the only Democrat to win statewide in any of the four election cycles from 2014 through 2020. Fried established herself as a prominent DeSantis critic during her first two years as a member of the state cabinet: Last month, she responded to the passage of a voter suppression bill by predicting that Floridians “will see Ron DeSantis for who he is, and that is an authoritarian dictator who is borderline fascism that we are seeing here in the state of Florida.”

Fried would be the first woman to serve as Florida’s governor if she pulls off another upset next year, as well as its first Jewish chief executive, but she has plenty of obstacles ahead of her. A late May St. Pete Polls survey found Crist beating Fried 55-22 for the nomination, though this is the only poll we’ve seen of that contest.

A few general election polls have been released this year, but they don’t agree how vulnerable DeSantis is in a state Trump took 51-48 last year. In late March, St. Pete Polls found Fried, who was the one Democrat tested, deadlocked with the governor 45-45. However, a Mason-Dixon survey done weeks before had DeSantis beating her 51-42, while the governor’s allies at the Florida Chamber of Commerce recently publicized their own numbers showing him ahead 51-39; Crist posted comparable deficits in both of those surveys.

ALABAMA U.S. SENATOR — CNN reported late last week that Katie Boyd Britt, the head of the Business Council of Alabama and a former chief of staff to retiring Sen. Richard Shelby, is “expected” to enter the Republican primary to succeed her old boss sometime this month. Britt at the time merely said she couldn’t comment as long as she led the Chamber of Commerce-type organization, but she announced Tuesday that she was stepping down from the Business Council.

Britt would be in for a tough primary against Donald Trump’s endorsed candidate, far-right Rep. Mo Brooks, but intra-party apathy to the congressman may give her an opening. CNN writes that some unnamed Republicans fear that Brooks, who was one of the ringleaders who egged on the crowd at the Jan. 6 rally that turned into an invasion of the U.S. Capitol, would be “an unreliable ally to the business community.”

Brooks’ detractors instead would very much prefer someone like Shelby, who spent decades in D.C. steering federal money to Alabama, and they see Britt as a good option. The field also includes Lynda Blanchard, a former ambassador to Slovenia who has already self-funded $5 million; Alabama requires a runoff if no one wins a majority in the primary.

GEORGIA U.S. SENATOR — The Atlanta Journal-Constitution reports that state Agriculture Commissioner Gary Black is “expected” to announce a bid for the Republican nomination to take on Democratic Sen. Raphael Warnock. Previous reports said that Black had been considering a bid, but there’s still no word on anything from Black himself.

It’s also unclear whether Black’s would-be campaign is contingent on a decision from former University of Georgia running back Herschel Walker, who has largely frozen the GOP while he mulls a bid himself. Walker has reportedly told Georgia Republicans he’ll announce his plans soon.

UTAH U.S. SENATOR — Former state Rep. Becky Edwards, who’d previously sent some mixed signals about whether or not she would in fact take on Sen. Mike Lee in next year’s Republican primary, announced just before the holiday weekend that she would indeed run. Unusually, Edwards’ challenge is centered around Lee’s unbending fealty to Donald Trump—an approach that would be a political death sentence anywhere but Utah, where a large number of otherwise conservative Mormon voters have demonstrated discontent with the GOP’s embrace of Trumpism.

Edwards didn’t directly mention Trump in her kickoff, but she did present herself as a candidate “who will prioritize the values of respect, honesty, civility and faith in the people of Utah”—something, safe to say, that describes the opposite of Trump. Last year, Edwards and other high-profile fellow travelers participated in a mostly online effort to encourage Mormon women to oppose Trump’s re-election, though his margin in the state actually increased compared to 2016. There may therefore be, even in Utah, a limited appetite for a #neverTrump-style Senate candidate.

GEORGIA GOVERNOR — The Atlanta Journal-Constitution reports that “[l]eading state Democrats are all but certain” Stacey Abrams will seek a rematch with Republican Gov. Brian Kemp next year, though he adds that an announcement “is not imminent.” No one, in fact, seems to know when Abrams might get in, but given her huge fundraising apparatus and considerable name recognition, she can afford to wait.