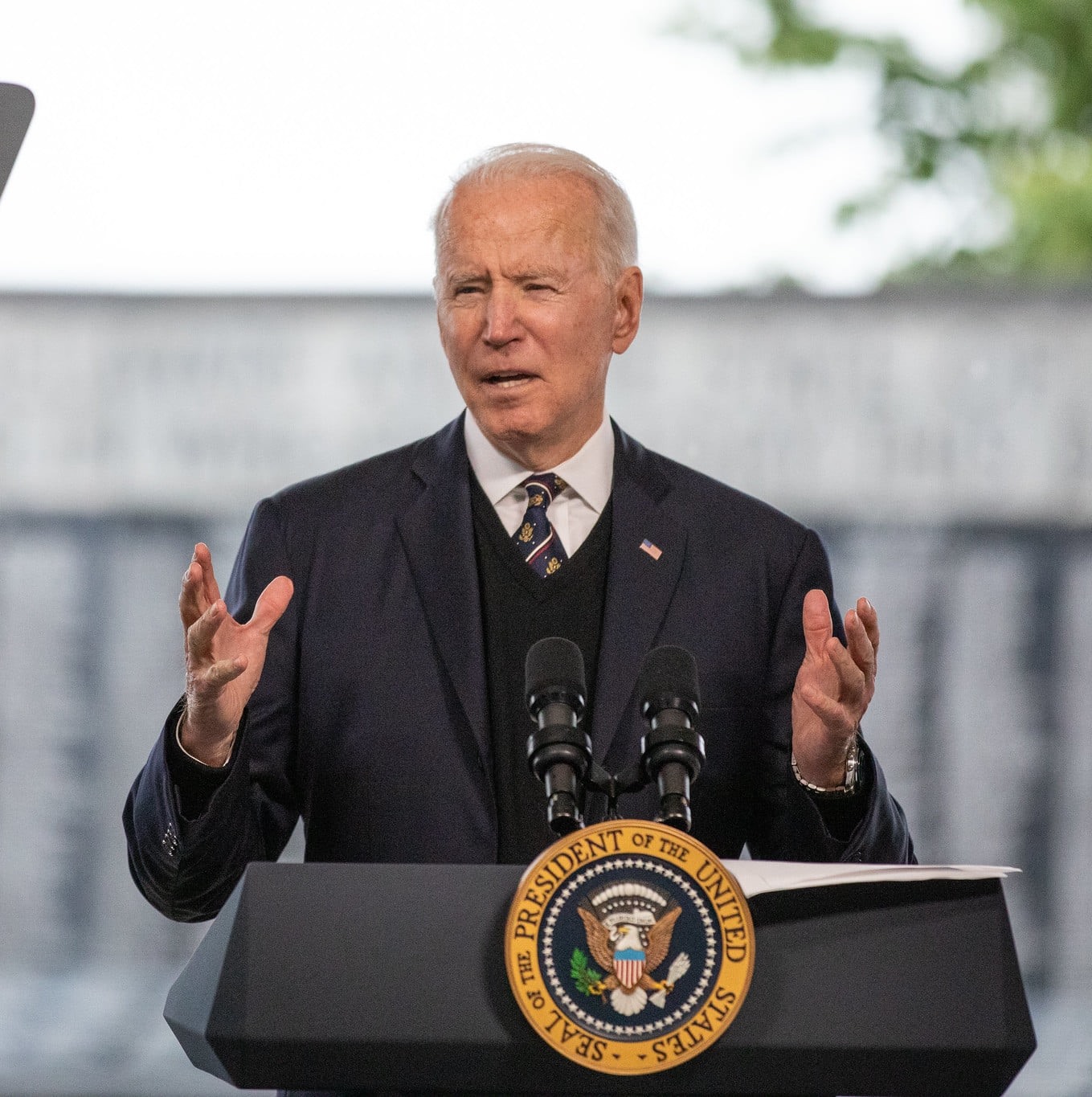 President Biden will meet with Sen. Shelley Moore Capito (R-WV) at the White House on Wednesday as part of bipartisan negotiations with Republicans on a potential infrastructure deal, The Hill reports. However, Senate Republicans are already privately warning there will not be any deal announced this week.

Playbook: “Biden has rewarded her with a rare solo meeting that excludes the others. We’ll be looking to see if the president pulls a signature Biden move intended to build trust: clearing the room of staff so he and Capito can talk in private.”

“White House aides on Tuesday night were all singing from a similar hymnal about this meeting: Biden is serious about a deal. He allowed his Memorial Day deadline to lapse because he believes the negotiations are making progress. The political media has been too quick to describe these talks as dead after every speed bump, partly because we’ve all forgotten what negotiations look like. This is a working meeting — not something ceremonial.”

“Biden ran on his ability to cut deals, practiced over 44 years in Washington, and by elevating these infrastructure talks to a one-on-one with Capito he risks taking more of the blame if they fall apart.”

“If that’s the case, they will have to crunch to get that done ahead of the August recess. Remember: to take advantage of budget reconciliation and the 51-vote threshold, both chambers need to pass the same budget. Add this to the stack of legislative issues Schumer has to get done during this very, very busy summer.”

Vox: “As Reid’s experience — both with nominees and with bills like the Affordable Care Act — demonstrated, waiting on Republicans only ever got Democrats so far.”

Said former Harry Reid staffer Murshed Zaheed: “I think the biggest lesson is never trust Republicans and always expect the worst from Mitch McConnell. I don’t think Democrats should be giving Republicans any chance at this point.”

Playbook: “Both senators obviously relish their independence and would probably wear such a rebuke as a badge of honor if it were coming from anyone else. But Biden is the leader of the party, and he just flashed a bright green light to the rest of the Democratic establishment: If they want to go after either member, go for it. (Neither office wanted to weigh in on this when asked for comment.)”

“Republicans working on an infrastructure deal told us they were confused by the swipe.”

Said one top GOP aide: “What the president said today was not helpful. There is a genuine interest among Senate Republicans to get a bipartisan deal focused on core infrastructure. We know there are a handful of Senate Democrats also interested in that. To the extent that the president pushes those Dems away, that’s helpful to us. They already don’t want to vote for what Biden is offering.”That GOP aide sounds pretty confused about whether Biden’s comments were helpful or not.

Michael Flynn is trying to take back his apparent endorsement of a violent military coup in the United States—despite his comments being caught on video.

“A cyberattack on JBS SA, the largest meat producer globally, has forced the shutdown of some of world’s largest slaughterhouses, and there are signs that the closures are spreading,” Bloomberg reports.

The cyberattack comes from a criminal organization likely based in Russia.

“The Interior Department will suspend several oil and gas leases in the Arctic National Wildlife Refuge, overturning one of Donald Trump’s most significant environmental acts during his last days in office,” the Washington Post reports.

“The move, which could spark a major legal battle, aims to unwind nearly a dozen leases in the heart of a pristine expanse in Alaska that Republicans and Democrats have fought over for four decades.”

Gabriel Debenedetti: “Something strange has been happening to my in-box. It’s still a wasteland, a ghastly stream of spam and requests from an endless array of politicians and political organizations. But the GOP fundraising emails — usually the loudest, angriest, most conspiratorial part of the mix — seem to have lost their main character.”

“By last count, I’ve now received 20 in a row in the past few hours — from national party committees, state parties, local candidates, PACs, super PACs, scam PACs, think tanks — that have nothing specific at all to say about Joe Biden.”

Sarah Kliff: “Some unvaccinated adults cite concerns about a surprise bill as a reason for not getting the shot. Many of them are accustomed to a health system in which the bills are frequent, large and often unexpected.”

“A recent Kaiser Family Foundation poll found that about a third of unvaccinated adults were unsure whether insurance covered the new vaccine and were concerned they might need to pay for the shot. The concern was especially pronounced among Hispanic and Black survey respondents.”

Former President Donald Trump has been telling “a number of people he’s in contact with” that he expects he will get reinstated as president by August, the New York Times reports.

“Another four people associated with the right-wing Oath Keepers paramilitary group have been indicted in the federal conspiracy case surrounding the Jan. 6 assault on the U.S. Capitol,” USA Today reports.

Senate Minority Leader Mitch McConnell (R-KY) defended his decision to block the bill to create a bipartisan commission to study the January 6 insurrection.

Said McConnell: “I don’t think anybody’s going to get away with anything. I think we’ll know everything we need to know. We were all witnesses, we were right there when it happened. And I simply think the commission is not necessary.”

She added: “And I was a person who supported Donald Trump. Brian was a supporter of his… He knew that Brian was devoted to him, and he did not once reach out to me… he didn’t even send a letter of condolences. He did absolutely nothing.”

“And then there are those who take this sacrifice for granted, waxing patriotic while salivating for civil war. Claiming they need to destroy the Republic in order to save it in the ultimate betrayal of oaths sworn. Those treacherous snakes can go straight to hell.” — Rep. Peter Meijer (R-MI), in a tweet on Memorial Day.

Wall Street Journal: “The labor-market recovery after the coronavirus pandemic and related shutdowns is playing out unevenly across the U.S., from states where there are five openings for every unemployed worker to several where historically high jobless rates persist.”

“In some regions, including less populated areas that imposed fewer Covid-19 restrictions—states such as Utah and the Dakotas—the labor market is red hot, with many employers struggling to fill open jobs. Elsewhere, including in urban areas and tourist hubs that have been slower to ease restrictions—such as New York and Hawaii—labor demand is rebounding more gradually, making the shortages of workers less acute.”

Wall Street Journal: “Economists and policy makers are debating whether stimulus spending and easy monetary policy are fueling inflation. Many businesses say there is another culprit that should share the blame: import tariffs.”

“The Trump administration implemented tariffs on products including lumber, steel and semiconductors to shield American companies from a glut of cheap imported products from China and other countries.”

“The U.S. Trade Representative’s Office, which is conducting a review of U.S. tariff policy, is studying whether easing tariffs, among other factors, could relieve the supply shortage for lumber and other products.”

Politico: “In conversations with more than 20 lawmakers, ex-lawmakers, top advisers and aides, a common concern has emerged — that a host of national and statewide Republicans are either leaving office or may not choose to pursue it for fear that they can’t survive politically in the current GOP. The worry, these Republicans say, is that the party is embracing personality over policy, and that it is short sighted to align with Trump, who lost the general election and continues to alienate a large swath of the voting public with his grievances and false claims that the 2020 election was stolen.”

“Trump has driven sitting GOP lawmakers and political aspirants into early retirements ever since he burst onto the scene. But there was hope that things would change after his election loss. Instead, his influence on the GOP appears to be as solid as ever and the impact of those early shockwaves remain visible.”

Charlotte Alter: “Once upon a time, a shiny new trio of young conservatives — Ryan Costello, Carlos Curbelo and Elise Stefanik — wanted to help build a modern, millennial Republican Party. The 30-somethings, all sworn into Congress in 2015, understood that millennials often agreed on many of the nation’s core problems, and believed it was up to them to offer conservative solutions.”

“Ms. Stefanik’s rise — and her colleagues’ fall — is not just a parable of Trumpism. It’s a broader omen for a party struggling to reach a 21st-century electorate. She ascended by embracing a movement that is all about relitigating the past rather than welcoming the future.”

“Now she and other new Trump loyalists in Congress are caught between their party and their generations, stuck between their immediate ambitions and the long-term trends. The G.O.P. has embraced a political form of youth sacrifice, immolating their hopes for young supporters in order to appease an ancient, vengeful power.”

Florida Gov. Ron DeSantis (R) signed into law a ban on transgender girls from competing in girls’ and women’s sports at an event at a Christian school on the first day of Pride Month, the Orlando Sentinel reports.

From a Miami Herald editorial: “Perhaps it was just a big, unfortunate coincidence. But it feels more like an insult that Gov. Ron DeSantis chose June 1, the first day of LGBTQ Pride Month, to sign Florida’s biggest anti-LGBT bill in recent history.”

New York Times: “While gun sales have been climbing for decades — they often spike in election years and after high-profile crimes — Americans have been on an unusual, prolonged buying spree fueled by the coronavirus pandemic, the protests last summer and the fears they both stoked.”

“In March last year, federal background checks, a rough proxy for purchases, topped one million in a week for the first time since the government began tracking them in 1998. And the buying continued, through the protests in the summer and the election in the fall, until a week this spring broke the record with 1.2 million background checks.”

“West Virginia Gov. Jim Justice (R) is personally on the hook for nearly $700 million in loans his coal companies took out from now-defunct Greensill Capital,” the Wall Street Journal reports.

“Mr. Justice’s personal guarantee of the loans, which hasn’t been reported, puts financial pressure on the popular Republican governor. He is also dealing with unrelated lawsuits alleging parts of his sprawling network of coal companies breached payment contracts or failed to deliver coal.”

Illinois has become the first state to pass a bill to ban police from lying or tricking juveniles during questioning, Fox Chicago reports.  Minors are considered especially vulnerable, and have a much higher rate of confessions to crimes they did not commit.