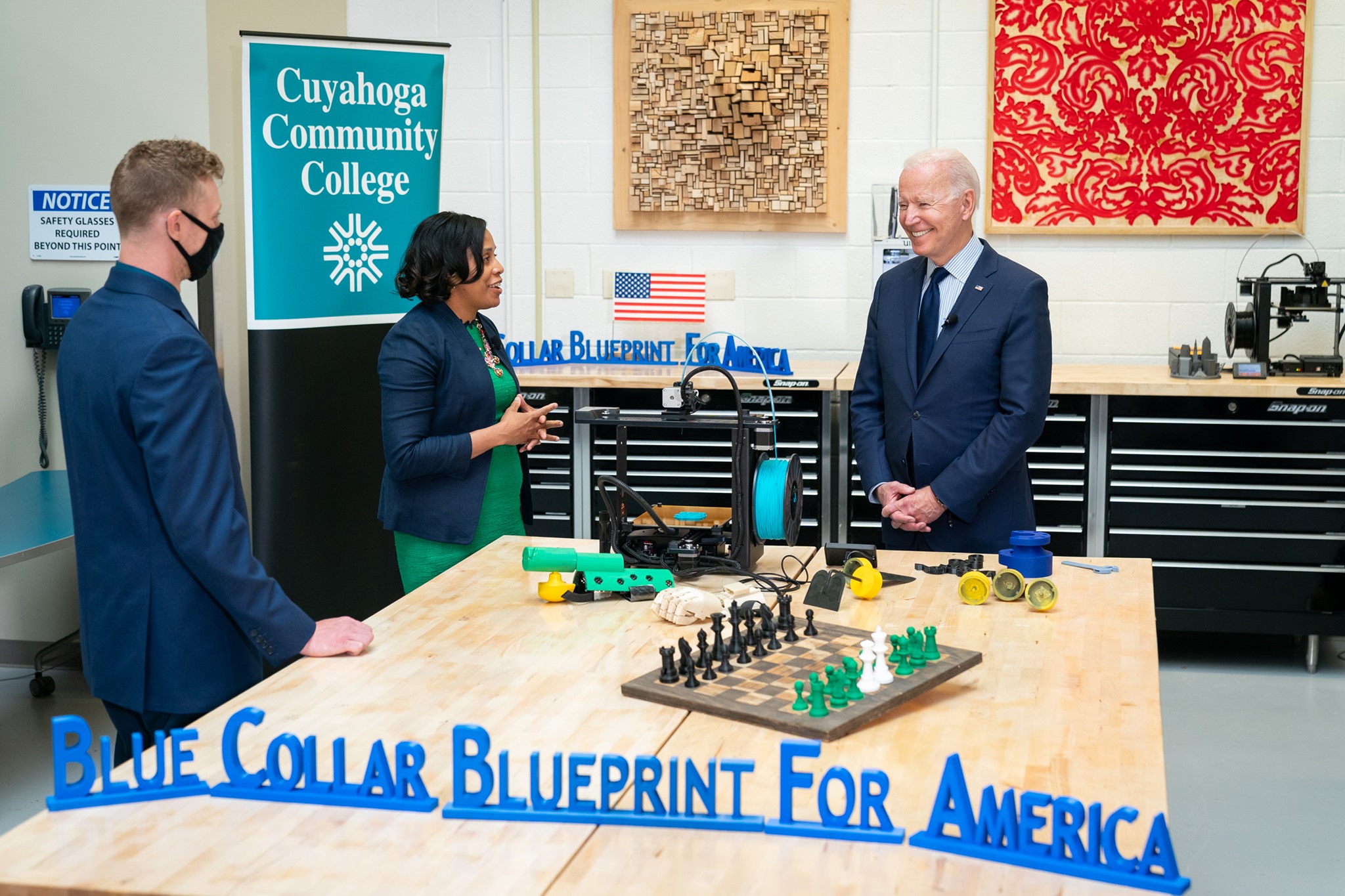 Washington Post: “At the start of the week, President Biden showcased the government’s preparedness for hurricane season. In the middle of the week, he comforted the family of George Floyd, grieving on the first anniversary of his death. By the end of the week, he was delivering remarks on the economy in one swing state (Ohio) and thanking the military in another (Virginia).”

“Much of this would ordinarily be utterly unremarkable. But in a nation that has endured more than a year of being tossed from its routines and unmoored from any sense of equilibrium, the past week was perhaps Biden’s closest return to a traditional presidency.”

Dan Balz: “Nearly five months after a pro-Trump mob of rioters stormed the Capitol, Senate Republicans have delivered another blow to the country, blocking creation of an independent commission to investigate the attacks. It was a partisan act and another reflection of democracy under stress.”

“Republicans had their reasons, or so they said, for doing what they did. There were, for example, aspects of the bipartisan agreement that led to the legislation to create the commission that they didn’t like. But the most important reason was their fear that Democrats would use the independent commission’s work against Republican candidates in next year’s elections by keeping alive former president Donald Trump’s role in the Jan. 6 attacks and his misdeeds ahead of it.”

Washington Post: “Many of the initiatives Biden wants to spend more on are popular with the public. He’s calling for more money for education, research, roads and bridges, high-speed Internet for all, universal pre-K, safety-net programs and expanded home health care for the elderly. All together, Biden is proposing the kind of massive expansion of the federal government’s role in the economy not seen since World War II. And, initially, it would be largely funded by borrowing money.”

“At heart, Biden’s budget is a clear statement that many Democrats no longer worry about deficits.”

Playbook: “If Democrats want to pass bills through reconciliation (which, behind the scenes, they admit they do) then a budget resolution must be passed to allow that to happen.”

Politico: “A budget blueprint that omits the Hyde amendment and other anti-abortion provisions could be Biden’s strongest statement yet of his commitment to making the procedure accessible, particularly for poor women of color who are disproportionately impacted by the funding bans.”

“President Joe Biden is selling his multitrillion-dollar spending proposals as the key to unlocking the power of the economy by pumping up productivity and drawing millions of Americans back into the labor force,” Politico reports.

“But the budget plan the White House unveiled on Friday projects economic growth of 2 percent or less per year for most of the next decade, after factoring in inflation.”

Politico: “Expanding coverage to the estimated 2.2 million people lacking affordable health insurance options in the Medicaid expansion holdout states would fulfill a Biden campaign pledge while his other key health care promises, like government drug price negotiations and a public option, face tough odds in Congress. Democrats also believe it would deliver a major win for their party heading into tightly contested midterm elections next year, given that Medicaid expansion has polled well — including in states where Republican leaders have blocked it for years.”

“However, the new effort carries risks that Democratic lawmakers, White House officials and health care advocates have been struggling to resolve in behind-the-scenes discussions over the past few months, say people involved in those talks. One challenge is designing a program that won’t invite backlash from a health care industry ready to battle Democrats on other sweeping changes. Another concern is inadvertently rewarding states that blocked Medicaid expansion for years. Any plan would also come with a steep price tag.”

“The two sides agreed that Bennett will serve first as prime minister until September 2023, when Lapid will take over until November 2025… The swearing-in ceremony is expected to take place in 10 days, following an announcement of the new government either on Saturday night or Sunday.”

Zeynep Tufecki: “If world leaders don’t act now, the end of the Covid pandemic may come with a horrible form of herd immunity, as more transmissible variants that are taking hold around the world kill millions.”

“In countries with widespread vaccination, like the United States and Britain, we can expect that Covid cases, hospitalizations and deaths will continue to decline or stay low, especially because lab tests and real world experience show that vaccines appear to defend recipients well against the severe effects of both variants.”

“For much of the rest of the world, though, this even more transmissible new variant could be catastrophic.”

The Senate finally confirmed Biden’s nominees for the US Postal Board of Governors, such that we now have a majority on that board. Time to fire DeJoy’s ass.

Rep. Matt Gaetz (R-FL) “has sailed into a new controversy, claiming money wired to close the sale on a St. Petersburg yacht his fiancée had agreed to buy ‘went missing,’” WFLA reports.

“According to a spokesperson for the Republican, he and his fiancée Ginger Luckey were ‘targeted by malicious actors’ during the purchase process of a St. Petersburg yacht.”

Senate Majority Leader Charles Schumer (D-NY) said Friday he is planning to force a vote next month on a sweeping bill to overhaul elections, setting the stage for a high-profile clash over the filibuster, The Hill reports.

Axios: “The sprawling voting reform and anti-corruption legislation is viewed as a top priority for Democrats, who are seeking to combat the wave of restrictive voting bills making their way through Republican state legislatures across the country.”

McGeachin, who recently announced a primary challenge to Little, issued the order yesterday while the governor was out of state.

Washington Post: “A Democratic Senate aide, who spoke on the condition of anonymity to discuss internal matters, said there is a misconception that Manchin and Sinema are mainly responsible for holding on to the filibuster. In reality, the aide said, there are at least 10 Democratic senators who disagree with key parts of the bills that Republicans are filibustering, but ‘they just don’t need to say anything crazy because Joe Manchin is out there taking all the arrows for them.’”

Washington Post: “Congressional Republicans and Democrats agree on precious little these days, but there’s growing bipartisan fervor — you could even call it impatience —related to President Biden’s business-as-usual approach to the 2022 Winter Olympics in China.”

“What Biden opts to do on the Olympics would send a signal about how his administration will curate the difficult, and important, relationship.”

“As two separate investigations into the Trump Organization heat up, a series of subpoenas issued by the New York attorney general and the Manhattan district attorney shows how prosecutors are probing one particular land deal,” the Daily Beast reports.

“The subpoenas, which have not been publicly released until now, have been issued during the past 18 months to three towns just north of New York City.”

“Investigators asked for a trove of documents related to Donald Trump’s failed attempts to develop a luxury golf course on a 212-acre, forested estate that spans across those three towns and includes several mansions. The requested documents and subsequent court filings show that investigators are examining whether the Trump Organization inflated the value of the property for a charitable tax write-off.”