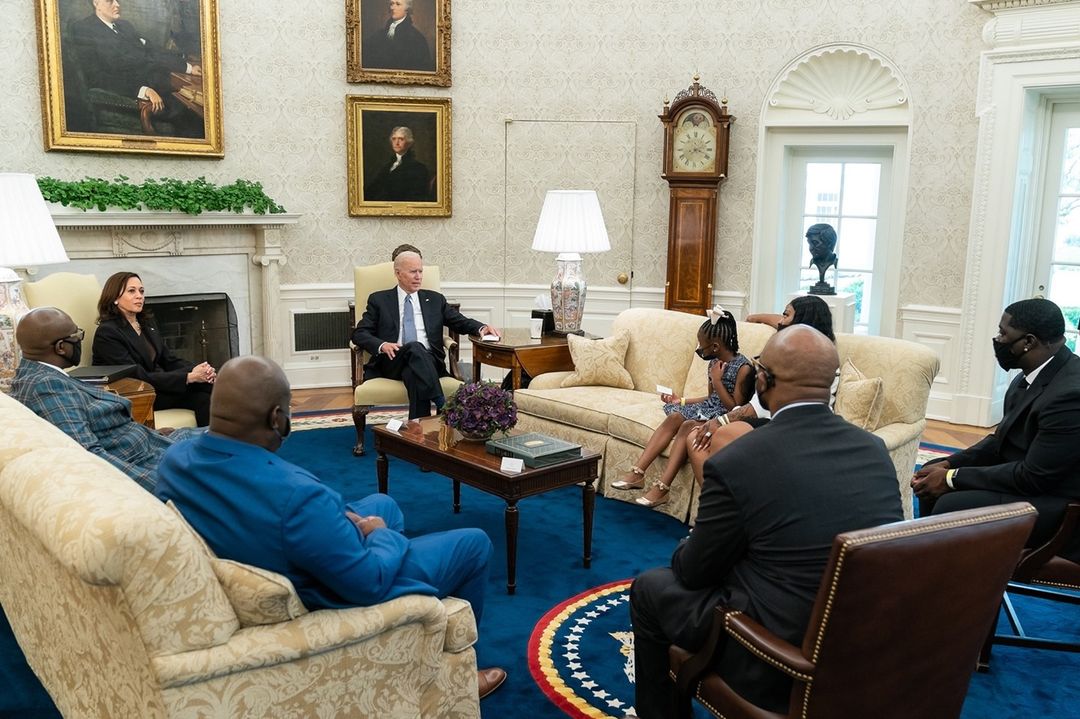 “Senate Republicans are expected to block on Thursday a bill creating a commission to investigate the pro-Trump riot at the US Capitol on January 6, which left five dead and about 140 police officers injured,” CNN reports.

“There is no excuse for any Republican to vote against this commission since Democrats have agreed to everything they asked for. McConnell has made this his political position, thinking it will help his 2022 elections. They do not believe the truth will set you free, so they continue to live in fear.”— Sen. Joe Manchin (D-WV), quoted by CNN.

“We’ve got to get to the bottom of this shit. Jesus. It’s a nonpartisan investigation of what happened. And if it’s because they’re afraid of Trump then they need to get out of office. It’s bullshit. You make tough decisions in this office or you shouldn’t be here.”   — Sen. Jon Tester (D-MT), quoted by Politico, on Republicans blocking the formation of a commission to investigate the Capitol insurrection.

Sen. Joe Manchin (D-WV) told reporters he was not open to eliminating the filibuster in order to get the January 6 commission bill passed. Said Manchin: “I’m not willing to destroy our government, no. I think we’ll come together. You have to have faith there’s 10 good people.”

Manchin could issue an ultimatum to Republicans: Either vote for the commission or I end the filibuster. He’s got all the power.

Senate Minority Leader Mitch McConnell (R-KY) has reached out to certain Republican Senators and asked them to vote against the January 6 commission bill as “a personal favor,” CNN reports.

McConnell explained his opposition to the bill to form a commission to investigate the January 6 insurrection: “I do not believe the additional, extraneous commission that Democratic leaders want would uncover crucial new facts, or promote healing.”

Well, here are just two things I’d like to know:

The only way to answer these questions is to form a commission — or for Congress to begin hearings in the normal committees of jurisdiction. If the hearings were focused on just those two questions, we would know a lot more about that sad day in American history. That Republicans are blocking an investigation should be very suspicious to all voters.

“White House officials and other Democrats close to the bipartisan infrastructure talks are willing to let the negotiations stretch past their Memorial Day deadline — but not too far,” Politico reports.

Following the latest Republican counteroffer on an infrastructure plan detailed below, President Biden said he spoke to Sen. Shelley Moore Capito (R-WV) and they’re speaking again next week, CNN reports. Said Biden: “We’re gonna have to close this down soon.”

Former Sen. Max Baucus (D-MT), one of the architects of Obamacare, told Insider that he was getting “somewhat” of a case of déjà vu seeing the infrastructure discussions unfold. Said Baucus: “I doubt you’re going to see much bipartisanship in the end. Frankly, a lot of Republicans would rather not see a bipartisan bill. They say they would, but deep down they don’t.”

“The GOP negotiators have said they would seek to pay for the offer by redirecting federal Covid-19 aid, an idea that Democrats on Capitol Hill are set to oppose.”

It’s not clear there’s an agreement in this proposal, but Republicans are succeeding in dragging out the talks.

“Some Senate Republicans might agree to add to the national debt to pay for a scaled-back infrastructure plan, senators and aides told Axios — one more grasp at a deal with President Biden before Democrats pack up and go it alone,” Axios reports.

“Skipping over the thorny question of how to offset up to $1 trillion in new projects could actually be politically and philosophically easier for GOP lawmakers than agreeing on tax increases.”

One other thing to keep in mind is that most of the latest Republican plan reflects baseline spending on infrastructure projects. There’s only $257 billion of new spending in the GOP plan. That’s just $32 billion a year for the next eight years.

The GOP offer isn’t even close, though it seems to be convincing the media to portray Republican senators as serious negotiators. Worse, there’s no indication that 10 Senate Republicans — the number needed to avoid a filibuster — even support this bill. Only four are involved in the negotiations. But an even bigger problem is that there is absolutely no common ground on how to pay for an infrastructure plan.

So as this political theater plays out, it’s worth noting that public opinion polls show that the pandemic relief is broadly popular among Americans, while Trump’s tax cuts have been consistently unpopular.

Jeff Stein: “Tentative relief among many progressives today that GOP counter-offer — by relying heavily on repurposing old funding — is likely so inadequate to the White House that they will reject it and go bigger/partisan route.”

When asked whether it was time to focus on setting up a reconciliation pathway for the infrastructure bill, Sen. Bob Casey (D-PA) told CNN: “I think we’re getting to that point… It’s an old expression, fish or cut bait.”

“The White House is set to propose on Friday a $6 trillion budget plan as President Biden seeks major changes to the U.S. economy and welfare system,” the Washington Post reports.

“The budget contains no new major policies from the White House and instead reflects the plans it has already introduced, including a $2.3 trillion infrastructure proposal, $1.8 trillion education and families plan, and $1.5 trillion in proposed discretionary spending.”

“It projects budget deficits above $1 trillion for the rest of the decade, as Washington’s spending imbalance remains at elevated levels. Even without new additional spending proposals, the annual federal budget is projected to include $5.8 trillion in spending in fiscal year 2021.”

“It’s important by itself but also seen by the left as a test for whether Democrats can work with the GOP on anything. If it fails to gain support, it would likely endanger future bipartisan efforts — including infrastructure talks — for the remainder of the 117th Congress.”

“The fate of the legislation, a top priority of Senate Majority Leader Chuck Schumer, grew brighter after a key vote stayed open for more than three hours — then ended in a Republican decision to let the bill move forward. But an ultimate accord appeared within reach after Schumer and Sen. Mike Crapo (R-ID) reached an agreement on a bipartisan trade proposal that GOP senators viewed as a dealbreaker.”

“Previously unreported emails attached to a little-noticed court document filed earlier this month show that Weisselberg is tied to another Trump financial scandal: the Trump inauguration case, which is currently being investigated by the attorney general of Washington, DC.”

“A group of Democrats from Ohio’s House of Representatives say they are tired of waiting for Republicans to expel former Speaker Larry Householder who was arrested last year on federal bribery and racketeering charges,” the Columbus Dispatch reports.

“They plan to introduce a resolution Wednesday that would remove the Republican from office.”

“Nashville’s top prosecutor said Monday that he will not enforce a newly enacted law that requires businesses and government facilities open to the public to post a sign if they let transgender people use multiperson bathrooms and other facilities associated with their gender identity,” the AP reports.

Said Nashville District Attorney General Glenn Funk: “I believe every person is welcome and valued in Nashville. Enforcement of transphobic or homophobic laws is contrary to those values. My office will not promote hate.”

Philadelphia Inquirer: “Ever since photos showed State Sen. Doug Mastriano (R) at the Jan. 6 rally in Washington that devolved into the deadly Capitol riot, the Franklin County Republican has said he did not cross police lines and left when the scene started to turn violent.”

“But video recently uncovered by amateur online sleuths appears to show that Mastriano — widely seen as a leading Republican contender for Pennsylvania governor in 2022 — stuck around longer and advanced closer to the Capitol building than he has previously acknowledged.”

Oklahoma Attorney General Mike Hunter (R) announced his resignation on Wednesday, less than a week after filing for divorce from his wife, the Oklahoman reports.

“The Oklahoman submitted questions to Hunter on Tuesday night about an extramarital affair that the newspaper confirmed through people familiar with the situation. The sources said the affair was with a state employee, who did not work in the attorney general’s office.”

Roll Call: “Dozens of at-risk House Democrats are betting that securing money for their constituents through earmarks will be somewhere between a net positive for their reelection campaigns and a neutral factor that won’t turn off undecided voters.”

Said Rep. Matt Cartwright (D-PA):  “I’ve been through two energetic elections, 2018 and 2020, and the charges that my opponents leveled had so little basis in fact that it makes me think something real like community project funding would not interest them.”

“Votes cast by legislators this session show the GOP in Iowa today is against democracy and public education and is dismissive of science that infringes on its policy preferences. It latches onto and runs with kooky ideas floated by national party operatives and right-wing special interests and calls them progress.”

“Take an objective look at what the representatives you elected did this session and ask yourself one question: How will my daily life be better now?”

The Orlando Sentinel editorial board says Sen. Marco Rubio’s (R-FL) opposition to a bipartisan Jan. 6 commission is the last straw and asks readers to “consider these words.”

“We need to learn as much as we can: A, because it was a shameful day — something that should never happen again — and B, because I think our enemies of this country, terrorists and others, will look to learn from that day, potentially, one day take lessons learned from it to attack us here.”

“That’s not from the Miami Herald’s editorial. That’s what Rubio himself said less than two weeks ago.”

“Sorry to say it, but Marco Rubio is beyond hope.”