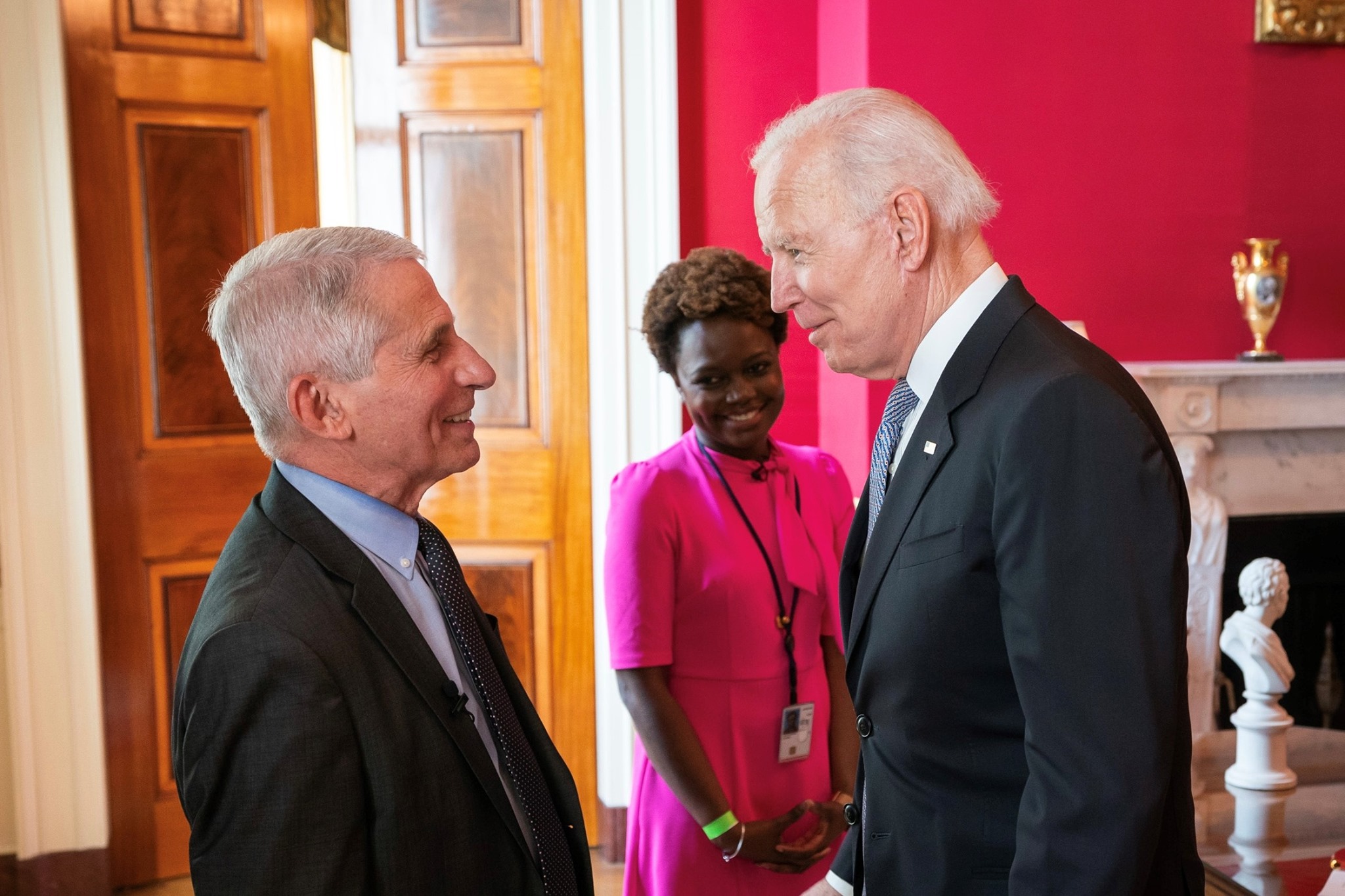 A new Quinnipiac poll finds 85% of Republican voters say they would prefer to see their party’s candidates mostly agree with former President Donald Trump. Asked whether they would like to see Trump run for president in 2024, Republicans say 66% to 30% they would.

A new Quinnipiac poll finds 55% of voters say they view the events of January 6th as an attack on democracy that should never be forgotten, while 39% say too much is being made of the storming of the U.S. Capitol and it is time to move on.

The partisan breakdown: Democrats say by 84% to 12% and independents by 54% to 42% that the January 6th storming of the Capitol should never be forgotten, while Republicans say by 74% to 18% that too much is being made of it.

Politico: “Trump is confiding in allies that he intends to run again in 2024 with one contingency: that he still has a good bill of health… That means Trump is going to hang over the Republican Party despite its attempts to rebrand during his exile and its blockade of a Trump-centric investigation into January’s insurrection.”

Teasing another presidential campaign is the best way to distract the media from much bigger stories involving Trump.

Playbook: “They’ll never say it publicly. But Republicans in Washington are dreading Donald Trump’s return to the stump, predicting his rallies will cause a major headache for the party as it mounts a bid to take back Congress in 2022.”

“Even as they tee off against Twitter and Facebook for banning Trump, GOP lawmakers are privately relieved he no longer has those megaphones. But the resumption of rallies gives Trump a new platform to spout conspiracy theories about the election and air his grievances — at the same time most Republicans are desperate to move on and talk about the Biden agenda.”

Said one senior House GOP aide: “If we win the majority back in 17 months, it’s going to be in spite of Trump — not because of Trump. He will totally take credit if we win the House back — but it won’t be because of him. This guy is a disaster.”

Wisconsin Assembly Speaker Robin Vos (R) “is hiring retired police officers to investigate aspects of the November election, joining with Republicans from around the country who have questioned President Joe Biden’s victory,” the Milwaukee Journal-Sentinel reports. Said Vos: “Is there a whole lot of smoke or is there actual fire? We just don’t know yet.”

Ron Brownstein: “The White House does see a risk in the possibility that Republicans—whether local election officials, GOP-controlled state legislatures, or a potential Republican majority in the U.S. House or Senate—will refuse to certify clear Democratic wins in the 2022 and 2024 elections.”

Said one senior Democrat: “Given how things have developed since January 6, if the situation is not brought under some control and this isn’t countered effectively, then I think there is a significant risk that Republican officials, unlike the ones we saw standing up to pressure in 2020, are going to decline to certify Democratic victories.”

“If Republicans hold the House, Senate, or both after the 2024 election, that could allow Congress to try to install a GOP president even if clear evidence exists that the Democrat won.”

CALIFORNIA GOVERNOR — A new Public Policy Institute of California poll finds Gov. Gavin Newsom (D) enjoys majority approval of his job performance — 54% of all likely voters — with a more robust 64% supporting his handling of the pandemic.

The poll showed that if the recall election were held today, 57% of likely voters would vote no on recalling Newsom, while 40% would vote yes and only 3% said they didn’t know.

“Multimillionaire recall candidate John Cox’s (R) prior gubernatorial campaign has been ordered by a judge to pay about $100,000 to a political consulting firm that produced television ads for his unsuccessful 2018 race — one of a string of unpaid bills detailed in a lawsuit and campaign filings,” the Los Angeles Times reports.

A new PRRI-IFYC study finds that 15% of Americans agree with the QAnon statement that the U.S. government, media and financial worlds “are controlled by a group of Satan-worshipping pedophiles who run a global child sex trafficking operation.”

And 20% agree with this statement: “There is a storm coming soon that will sweep away the elites in power and restore the rightful leaders.”

First Read: “It’s hard to call something fringe when approximately one-in-five Americans believe these statements, especially one that true patriots ‘may have to resort to violence’ to save the country.”

The Economist: “Here is what the millions of Americans who take their opinions from Fox News and related outlets have been hearing about Kamala Harris. The vice-president was put in charge of the southern border because she ‘has brown skin.’ Her picture book, Superheroes Are Everywhere, was issued to migrant children, maybe corruptly. (‘Is she profiting from Biden’s border crisis?’ tweeted Republican supremo Ronna McDaniel.) Metropolitan elites worship her; Vogue, which ignored lovely Melania Trump, put her (her!) on its cover. Her entrepreneur niece, Meena Harris, is an anti-white racist queen of cancel culture.”

“In other words, while the mainstream media soberly cover Ms Harris’s efforts to win Joe Biden’s trust and master her portfolio (which includes Mexico and Guatemala but not the border, where her book has not been issued to anyone), she is being relentlessly defined on the right as a dishonest member of the corrupt elite with an agenda alien to white America. Tucker Carlson—who during the election campaign refused to pronounce Ms Harris’s Hindu name correctly—has neatly synthesized these two slanders.”

Said Carlson: “She’s a globalist superhero. Just like Voldemort, you can’t really know how to pronounce her name.”

Charlie Cook: “But there is another risk beyond nominating fringe or flawed candidates. Republican leaders and other elected officials in Washington and in many state capitals are projecting great confidence that this election will be a referendum on the incumbent president, rather than on their own actions.”

“Granted, that is the norm, but it doesn’t seem as if many in the Republican Party are concerned about how their brand looks to anyone beyond their most loyal customers.”

“Senate Republicans see a special grand jury investigation into President Trump’s business practices by Manhattan district attorney Cyrus Vance Jr. as more evidence that Democrats want to keep Trump in the spotlight to drag them down in the midterm election,” The Hill reports.

“Republicans think the investigation will only further deepen partisan divisions over the former president and believe that even if he’s indicted, it won’t diminish him as a political force in 2022 and beyond.”

MISSOURI U.S. SENATOR — Missouri Independent: “According to several sources familiar with her plans, U.S. Rep. Vicky Hartzler of Harrisonville will announce her bid sometime in early June and go to Lincoln Days in full campaign mode.”

“So far, the field includes a disgraced former governor, the current attorney general and a man who blasted to internet fame by confronting protesters with a firearm in the race for Missouri’s open U.S. Senate seat.”

FiveThirtyEight introduced its partisan lean metric — a way of measuring the partisanship of a state or district.

“For example, if a state has a FiveThirtyEight partisan lean of R+5, that means it is 5 percentage points more Republican-leaning than the nation as a whole. Put another way, in an election that’s exactly tied nationally, we would expect Republicans to win that state by 5 points.”

GEORGIA U.S. SENATOR — The Atlanta Journal-Constitution reports that state House Speaker David Ralston is considering challenging Democratic Sen. Raphael Warnock, and his top aide didn’t rule anything out when asked about Ralston’s recent meetings with Senate Minority Leader Mitch McConnell and NRSC Chair Rick Scott. “He has stated several times that Republicans shouldn’t have lost that seat,” Kaleb McMichen said of his boss, before adding that Ralston was “working hard to see that does not happen again next year.”

Still, the AJC notes that not only has Ralston frequently flirted with running for higher office but never done it, he’d also need to sacrifice his powerful perch in state politics in order to campaign statewide.

Associated Press: “The Georgia Democratic Party has its answer for how the state delivered its electoral votes to Joe Biden for president in November and gave Democrats control of the U.S. Senate with runoff victories two months later.”

“The short answer: time, money and plenty of staff and volunteers using ‘tailored outreach’ to make Georgia’s electorate younger, less white and more focused on absentee and early voting than it’s ever been.”

NEW HAMPSHIRE 1ST CD — Marine veteran Julian Acciard has announced that he’ll seek the Republican nomination to take on Democratic incumbent Chris Pappas in the 1st District, a seat the GOP is very keen to make redder through redistricting. WMUR writes that Acciard “wants to deliver his conservative message with kindness,” and the new candidate has already given us an early look at his brand of kindness. “Systemic racism was actually built―it was a system of racist policies built by Woodrow Wilson, FDR, and every single Democrat since,” said Acciard.

The problem with pieces and punditry like this is that Trump is not gone. Everyday he and the Republicans remind us that he is still here and ready to come back. Elections already in 2021 have shown a highly engaged Democratic base turning out in high numbers. That is not going to change in 2022. 2022 is not going to go like many people think.

Similarly to former California Rep. Harley Rouda, DePasquale never really stopped running for this seat, even after his loss. In December, DePasquale filed paperwork with the FEC and, within his message to supporters, he linked to a campaign-style video that criticizes Perry for supporting Donald Trump’s efforts to overturn the 2020 election.

“In what’s expected to be a brutal contest pitting the Bush family scion against a scandal-plagued incumbent, Trump’s endorsement will go a long way toward determining the winner. The former president remains popular with the Texas Republican base — so popular that Bush, Jeb Bush’s son and currently the state’s land commissioner, has studiously avoided his family’s entanglements with Trump.”

GEORGIA 14TH CD — Physician John Cowan, who lost last year’s GOP runoff to Marjorie Taylor Greene by a 57-43 margin, reiterated that he’s considering a rematch, though he says he wants to wait to see how redistricting might affect Georgia’s 14th District, which occupies the rural northwestern corner of the state.

Despite his loss, Cowan seems to have a pretty good sense of Greene’s appeal to primary voters. “It’s not that she’s some great leader or ideologue or she’s going to be able to reform our healthcare system,” he told Insider in a new interview. “They’re like, ‘No, she’s going to go burn it to the ground. We want you to come in when it’s in the ashes and come back up, and I’m kind of like, ‘Well, I’d like not to see it get burned to the ground.'”

The problem, of course, is that Greene’s supporters aren’t interested in anything resembling the truth—something Cowan himself knows well. Not long after he and Greene advanced to last year’s runoff, he tried to pitch himself with the tagline, “All of the conservative, none of the embarrassment.” Needless to say, it didn’t work: Republican voters embraced all of the conservative and all of the embarrassment in one complete package.