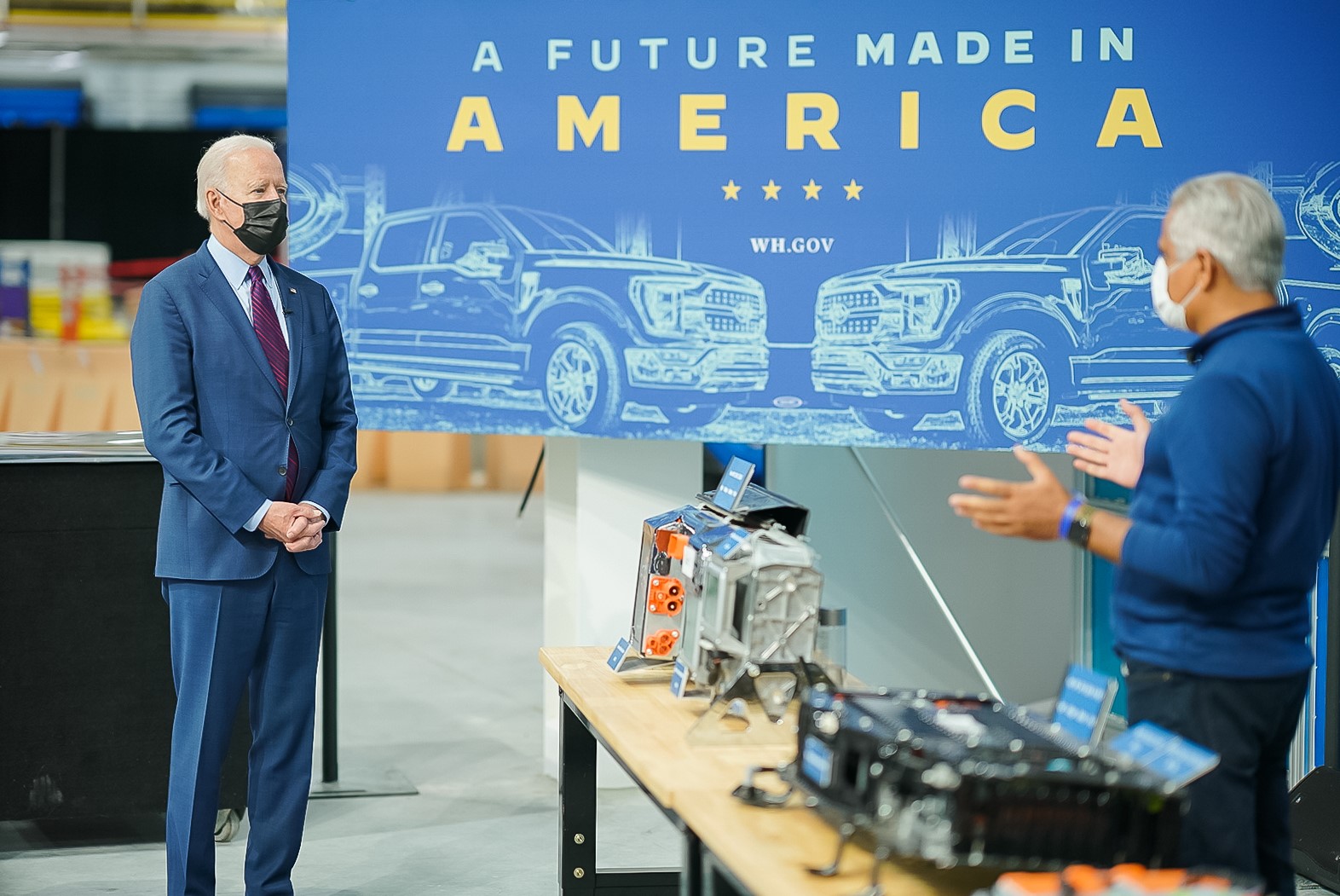 A new Harvard CAPS/Harris poll finds 62% of respondents said they either strongly or somewhat approve of the job President Biden is doing, while 38% said they disapprove.

A new Siena College poll finds a plurality of New York voters — 49 percent — say Gov. Andrew Cuomo (D) should not resign from office. But a majority of voters — 53 percent — say they prefer voting for someone else rather than re-electing him in 2022. Nonetheless, a generic Democrat still leads a generic Republican in next year’s gubernatorial race by a 55% to 29%.

“Her Republican opponent used the same preelection push to warn that she would be heading to Washington to ‘defund the police’ and back legislation to close all federal prisons within 10 years, releasing infamous criminals out on the street.”

New fundraising reports show Democratic state Rep. Melanie Stansbury far outraising—and outspending—the rest of the field ahead of the June 1 special election in New Mexico’s 1st Congressional District. From April 1 through May 12, Stansbury brought in $1.2 million and spent $765,000, leaving her with $525,000 on hand. Her Republican opponent, state Sen. Mark Moores, raised just $345,000 and spent $470,000, ending the period with $125,000 in the bank. Meanwhile, former state Land Commissioner Aubrey Dunn, a Republican-turned-Libertarian who’s now running as an independent, raised only $15,000 and spent $45,000, with $10,000 left over. Actual Libertarian candidate Chris Manning didn’t file a report with the FEC.

As for outside spending, it’s been almost nonexistent. A conservative group called the Freedom Forward Fund put $35,000 into digital ads attacking Stansbury earlier this month, while the progressive organization People for the American Way spent $16,000 on emails promoting her candidacy.

LATINO VOTE — An analysis done by Voto Latino, and provided to the Washington Post, “showed that during the 2020 election, the group collected 617,714 complete voter registration applications — a 123% percent increase over their projected goal for the cycle.”

Said María Teresa Kumar, CEO of Voto Latino: “The younger Latinx was a larger share of the overall Latino electorate, the state swung for Biden: Arizona, Nevada, Georgia, and Pennsylvania. If this trend holds true: Texas and North Carolina will be next in play as younger Latinos eclipse older generations.”

She added: “Florida, where the Latino vote share is older, will be harder to flip.”

Said Trump: “As massive crime in the 2020 Election is becoming more and more evident and obvious, Brnovich is nowhere to be found. He is always on television promoting himself, but never mentions the Crime of the Century, that took place during the 2020 Presidential Election, which was Rigged and Stolen.”

Said Bush: “We talked about the importance of putting the right team on field, because the Democrats are targeting our state. We talked about my race and the vision that I have for the state of Texas.”

Apparently Bush is not concerned about Trump repeatedly insulting his own father.

Nathaniel Rakich: “Take a look at the 10 House seats that have sat vacant the longest since 1997. Nine of them have something in common: Not only did the vacancies take place in the past 10 years, but the representatives who vacated the seats did not belong to the same party as the governors of their states.”

“This lopsided difference suggests that governors are increasingly delaying special elections to deprive their political opponents of a voice and vote in the House.”

“Youngkin’s ad is airing statewide over the next two weeks, including in pricey Northern Virginia, at a cost of $1.6 million.”

Said Murphy: “The reality is that Marco Rubio will not be an easy opponent especially if it’s on the heels of a bruising primary where Democrats spend millions attacking each other.”

Her decision also will come as a relief to House Democrats looking to defend a seat that could get a lot redder in redistricting. The current version of Florida’s 7th Congressional District, which is based in the northern Orlando suburbs, started the decade as very closely divided turf on the presidential level, but it’s moved steadily to the left since, backing Joe Biden by a 55-44 margin last year. Republican mapmakers will have the chance to reverse the impact of those shifts, though, and Democrats will likely benefit from having a battle-hardened incumbent there to defend it.

Ashley Daniels and Pearl Dowe: “We expect Demings will have a good chance, given her strong fundraising history and her connection to Black female voters in community and civic organizations. Our research finds that Black women’s organizations are critical in mobilizing support and votes.”

“When a statewide Democratic candidate takes full advantage of these networks, engaging regularly with Black female voters, that constituency can give her a competitive edge — at times enough to win historically Republican states.”

“That’s what we saw in 2017, when Doug Jones won the U.S. Senate race in Alabama, backed by Black women. And it’s what we saw when both Raphael Warnock and Jon Ossoff won the 2021 Senate runoffs in Georgia.”

A new Ipsos poll finds 56% of Republicans believe the 2020 presidential election was rigged or the result of illegal voting, and 53% think Donald Trump is the actual President, not Joe Biden.

This kind of result begs the question: are these respondents just messing with pollsters, or do they actually believe it? The answer is that it very much depends on the venue.

For example, if you took these respondents into a court-like setting and forced them to build an actual case with penalties for resorting to falsehoods, it’s likely a bunch of them would ditch out. For them, saying Trump is the president is aspirational, a kind of protest.

But if you take these same respondents and place them in a setting with no penalties for falsehoods — say the voting booth — the valley between truth and lie closes completely.

Simply put, any Republican elected official who doesn’t embrace (or at least play along with) assertions that the 2020 election was stolen and that Trump is the rightful president is inviting a primary challenge and could be out of job.

That’s what makes the lie quite real. In the voting booth, the Kool-Aid drinkers and the ones cheering it on are effectively the same.

TEXAS GOVERNOR — Associated Press: “For months, O’Rourke has kept his options open. A top aide to the former Texas congressman and presidential candidate said O’Rouke has not ruled out challenging Republican Gov. Greg Abbott in 2022 but has taken no formal steps toward a campaign, like calling donors or recruiting staff.”

“A comeback in Texas could be complicated by liberal positions he took while seeking the presidency, but likely no other Democrat would enter the governor’s race with the same ability to quickly raise the massive campaign funds needed to compete in the state.”

PENNSYLVANIA GOVERNOR — Republican Nche Zama, whom ABC 27 describes as a “renowned cardiothoracic surgeon,” has joined the race for this open seat.

NORTH CAROLINA U.S. SENATOR — Brunswick County Commissioner Marty Cooke has filed paperwork with the FEC for a potential bid for the Republican nomination.

NEVADA GOVERNOR — The Nevada Independent’s Jon Ralston reports that Clark County Sheriff Joe Lombardo has decided to seek the Republican nomination to take on Democratic incumbent Steve Sisolak, and that he’ll be making his announcement sometime next month. Ralston adds that former Lt. Gov. Mark Hutchison has signed on to chair Lombardo’s campaign rather than run himself, though neither Republican has said anything publicly yet.

The Las Vegas Review-Journal wrote last month that Silver State Republicans believed that Clark County Sheriff Joe Lombardo, Rep. Mark Amodei, and former Lt. Gov. Mark Hutchison would decide which one of them should run for governor next year, but one member of the trio now indicates he’s not quite on board with this plan.

Amodei told the Associated Press that he was still making up his own mind and had no timeline to decide. Amodei also relays that another high-profile Republican, former Sen. Dean Heller, told him the previous week that he, too, was thinking about taking on Democratic Gov. Steve Sisolak. The former senator himself has not yet said anything publicly about his 2022 plans, however, and he didn’t return Price’s request for comment.

Heller had considered running for governor in the 2018 cycle only to seek re-election instead, though that decision doesn’t seem to have been entirely voluntary. Ralston wrote at the time that Heller decided it “wasn’t worth the risk” of running for governor in a primary against Adam Laxalt, who represented the Trumpier wing of the party; both Heller and Laxalt ultimately met the same fate in the general election when they lost to Democrats by similar margins.

The only notable Republican currently challenging Sisolak is North Las Vegas Mayor John Lee, a former conservative Democrat who switched parties weeks ahead of his kickoff. Lee says that he’d previously called Lombardo to inform him he was in, adding that the sheriff “called me up maybe two weeks later and said, ‘Hey, I want to give you the same courtesy that I think you gave me, and I’m going to run too.'”

Espaillat also explained why he was now backing one the most conservative candidates by arguing that Adams was actually a progressive. Things got a bit awkward, though, when the congressman tried to lay out his own progressive credentials by blurting out, “I read Das Kapital!”

Comeback PAC, a group that Politico reports is funded by a group of pro-charter school billionaires, has launched a $2 million TV buy in support of 2020 presidential candidate Andrew Yang ahead of the June 22 Democratic primary. The opening ad invokes 9/11 and Hurricane Sandy, with a narrator declaring, “After the towers fell and the waters rose, New York came back. And Andrew Yang will help us do it again.”