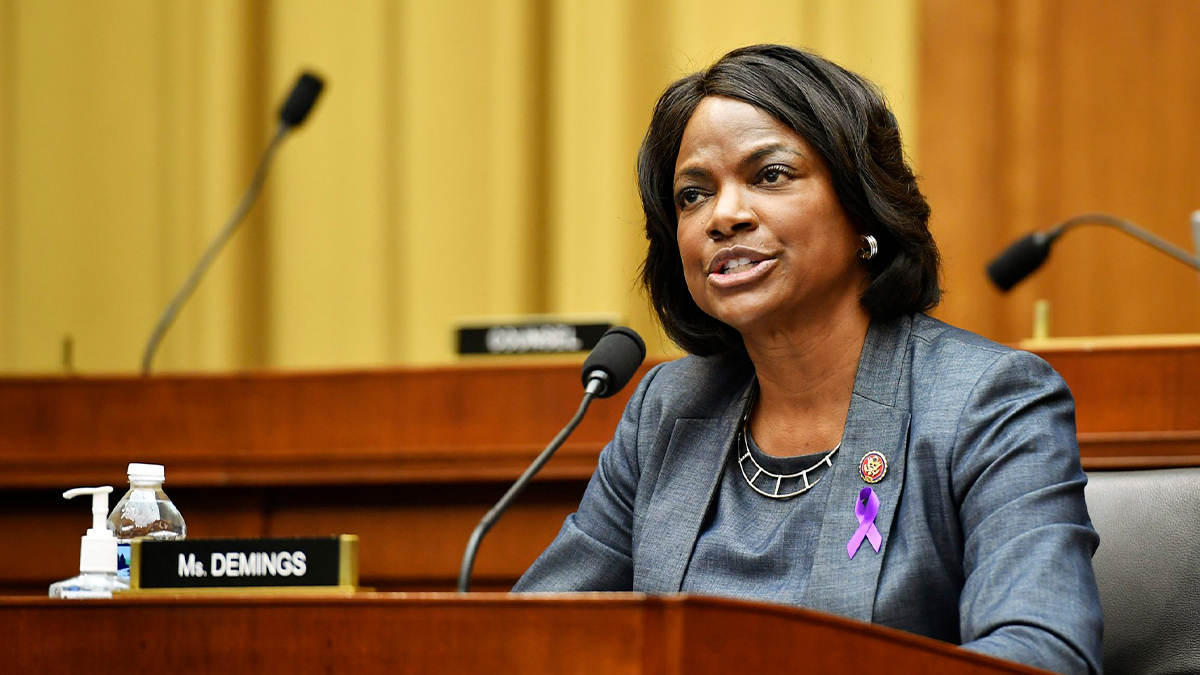 Politico: “For months, Demings mulled which statewide office to pursue, but decided she could do the most good by taking on the two-term senator.”

This race will be epic, though Demings will have to get past Rep. Stephanie Murphy in the Democratic primary first.

With a 50-50 split, the battle for control of the U.S. Senate in the 2022 midterms was always going to be intense. But Demings running against Rubio is a huge get for Democrats. Demings has a national profile and will have virtually limitless amounts of money to spend in what could easily be the most expensive race next year.

And just as Florida has frustrated Democrats in recent years, New Hampshire has almost been as frustrating for Republicans. Democrats now have a chance to pick up seats in five states: Pennsylvania, North Carolina, Wisconsin, Ohio and Florida. In contrast, Republicans have decent pick-up opportunities in just three states: New Hampshire, Arizona and Georgia.

The fields are far from set in these states, but the entry of Demings is a big deal.

Andrew Giuliani (R), the son of former New York City Mayor Rudy Giuliani, announced Tuesday that he’s officially running for governor of the state in 2022, NBC News reports. Said Giuliani to the New York Post: “I’m a politician out of the womb. It’s in my DNA.” He added: “Giuliani vs. Cuomo. Holy smokes. It’s Muhammad Ali vs. Joe Frazier. We can sell tickets at Madison Square Garden.”

Gov. Andrew Cuomo hasn’t had a lot of good news lately, but he would certainly welcome Giuliani as an opponent.

Chris Christie (R) told the Ruthless podcast that he will not wait to see if former President Donald Trump runs for president in 2024 before making his own decision to run.

Said Christie: “I’m also not going to be one of these people who’s going to say, ‘Well, I’ll wait to see what President Trump’s going to do.’ You know, I’m not going to defer to anyone if I decide that it’s what I want to do, and that I think I’m the best option for the party and for the country.”

Said Scott: “What I’ve suggested to him is to let the citizens of that state pick their primary winner. And then help those that win that he believes in.”

Charlie Cook: “There are clear signs that the enthusiasm for Trump—in other words, his force as a person—is waning, but there are no signs that his message and positions on key issues are similarly losing that intensity of support.”

Politico: “While many Washington Republicans stick to their defense of fossil fuels, automakers have shifted their political giving. The industry as a whole was a big giver to Republicans until 2006, when its political donations became split more evenly between the parties.”

“In 2020, automakers heavily favored Democratic candidates for the first time.”

“The top Republicans in Arizona’s largest county gave an impassioned defense of their handling of the 2020 election Monday, calling on fellow members of the GOP and business leaders to speak out against an unprecedented partisan election audit,” the AP reports.

“The GOP-dominated Maricopa County Board of Supervisors cast the audit as a sham that’s spun out of the control of the state Senate leader who’s ostensibly overseeing it.”

“In other words, the Republican Party’s internal civil war could push some less committed Republican voters to the Democrats.”

PENNSYLVANIA GOVERNOR — Former Rep. Lou Barletta announced on Monday that he’d run for Pennsylvania’s open governorship next year, making him the most notable Republican to enter the race so far, though the bar is still pretty low. Barletta left his perch in the House to run statewide four years ago—reportedly at Donald Trump’s behest—but got crushed 56-43 by Democratic Sen. Bob Casey.

Barletta’s connection to Trump is a simple one: The former congressman made his name as a virulent anti-immigration crusader while the mayor of the small city of Hazleton in the 2000s, going so far as to pass a law that would have denied permits to businesses that employed undocumented immigrants and fined landlords who rented property to them. The act, which was soon copied by several other cities, also sought to make English the city’s official language.

While his attitude made him a hero to nativists, Barletta’s foray into lawmaking was a disaster: The ordinance was eventually struck down in federal court, and after being ordered to pay $1.4 million to the ACLU in legal costs, Hazleton had to seek a bailout from the state. (The city’s lawyer, by the way? None other than Kris Kobach.)

Naturally, with a background like this, Barletta was an early Trump endorser, and Trump returned the favor during his Senate bid, helping Barletta easily turn aside state Rep. Jim Christiana in the GOP primary. Trump later stumped for Barletta in Pennsylvania ahead of the general election, but needless to say, it did not help.

Like just about every Republican running for office these days, Barletta says he’d once again like Trump to intervene on his behalf, but as always, there’s no telling whether he’ll do so, especially with the field far from settled. In what might be a record for us, we’ve taken note of 27 other potential GOP candidates in the Digest at one point or another, not including the lone entrant prior to Barletta, Montgomery County Commissioner Joe Gale. It may therefore be a while before we know what the primary looks like.

NEW HAMPSHIRE U.S. SENATOR / GOVERNOR — Politico reports that former Republican Sen. Kelly Ayotte “is not currently interested” in challenging Democratic Sen. Maggie Hassan for her old seat next year. According to an unnamed Republican source, however, Ayotte might run for governor if the current incumbent, fellow Republican Chris Sununu, decides to take on Hassan, which confirms earlier speculation in the local press.

OHIO U.S. SENATOR / SECRETARY OF STATE — Republican Secretary of State Frank LaRose, who’d been considering a bid for Ohio’s open Senate seat, instead announced on Monday that he’d run for re-election to his current post. LaRose had said on March 3 that he’d make a decision in two weeks, which is a good reminder that you should always view these sorts of timetables skeptically.

ARIZONA GOVERNOR — State Treasurer Kimberly Yee announced on Monday that she’d run to succeed term-limited GOP Gov. Doug Ducey, making her the first notable Republican to enter the contest. Yee was a member of the state House and Senate for much of the last decade before her 54-46 victory over Democrat Mark Manoil in 2018 made her Arizona’s first Asian American statewide elected official.

While Ducey hasn’t taken sides in the race to replace him, the Arizona Republic’s Laurie Roberts previously reported that Yee might be his favorite. Republican operatives have speculated that Ducey backed a profile-raising effort by Yee last year to oppose a ballot measure to increase school funding by raising taxes on the wealthy (it lost, but Yee benefited by starring in commercials).

Ducey, said Roberts, was apparently eager to thwart the ambitions of state Attorney General Mark Brnovich, with whom he’s repeatedly clashed. A report last month, however, indicated that Brnovich was leaning toward a Senate bid rather than a gubernatorial campaign, now that Ducey’s passed on challenging Democratic Sen. Mark Kelly. Whatever Brnovich decides, though, several other Republicans are still eyeing the governor’s race.

As for Democrats, the only noteworthy candidate so far is former Nogales Mayor Marco López, though a number of prominent names remain in the mix, including Secretary of State Katie Hobbs.

RHODE ISLAND GOVERNOR — State Treasurer Seth Magaziner, who earlier this month confirmed he’s looking at a possible campaign for governor, now says he will “make a decision shortly” about whether to seek the Democratic nomination next year.

TEXAS GOVERNOR — A spokesperson for Democrat Julián Castro’s PAC says the former HUD secretary “hasn’t ruled anything out” with respect to a possible gubernatorial bid, adding that he’s “watching the race closely.” In January, Castro himself said he’s “very unlikely” to run next year.

VIRGINIA GOVERNOR — Former Del. Jennifer Carroll Foy’s latest ad ahead of the June 8 Democratic primary is a positive spot in which she emphasizes her background, including her graduation from the prestigious Virginia Military Institute, her work as a public defender, and her election in 2017 as a state delegate.

GEORGIA LT. GOVERNOR — Georgia Lt. Gov. Geoff Duncan (R) told the Atlanta Journal Constitution that he won’t be seeking a second term as Georgia’s No. 2 official and will instead focus on building a “GOP 2.0” movement that urges fellow Republicans to envision a party beyond former President Donald Trump.

Duncan left open the possibility that he could seek office again in the future, but for now, his departure creates another open-seat race for lieutenant governor in Georgia. Two Democrats, state Reps. Erick Allen and Derrick Jackson, are already running, while the Atlanta Journal-Constitution’s Greg Bluestein suggests three different Republican state senators could join the race: Steve Gooch, Butch Miller, and Burt Jones.