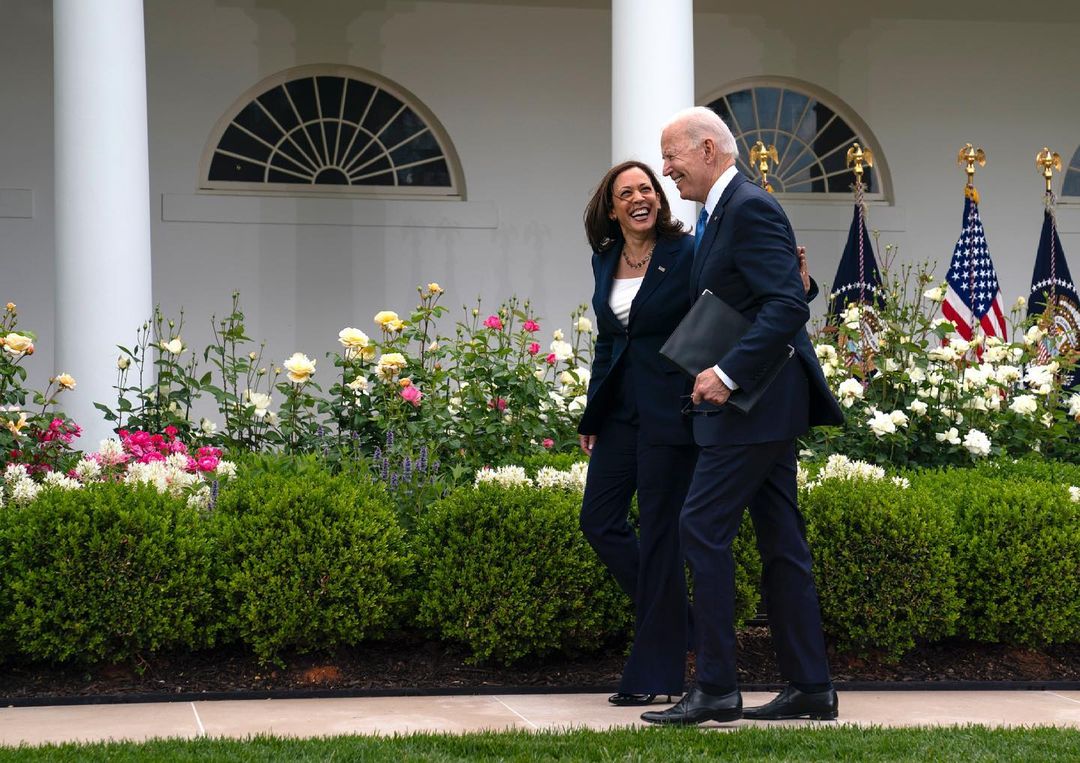 This is interesting: House Minority Leader Kevin McCarthy says he did not sign off on the commission.

Politico: “The rift between the two parties over the insurrection is worse today than it’s been at perhaps any point since early January, with lawmakers openly berating each other in the hallways and refusing to partner on legislation.”

“The fractious breakdown of what little bipartisan comity remained in the House is playing out, of course, in the long shadow of the former president. And the growing tide of GOP insurrection revisionism could turn the already-bitter divide between House Democrats and Republicans who voted to support Donald Trump’s election challenges into permanent cold war.”

Rep. Andrew Clyde (R-GA) wasn’t interested in talking to reporters when given a chance to explain his comments yesterday that the January 6 riots at the U.S. Capitol looked like a “normal tourist visit.”

Rep. Adam Kinzinger (R-IL) condemned his party’s downplaying of the Capitol riots on January 6 in an interview on The View.

Said Kinzinger: “When I saw my colleagues speak, you know, it feels like it’s in a 1984 — something you see out of North Korea, where it’s like ‘we’re just going to state whatever we want the reality to be.’”

He added: “I was there on Jan. 6. This was a real insurrection. This was an insurrection of people that thought they were doing Trump’s bidding at the behest of Trump. Not just on that day but in the days leading up to that, with the narrative of a stolen election.”

Rep. Liz Cheney (R-WY) went after Fox News in an interview on Fox News, Politico  reports. Said Cheney: “We all have an obligation, and I would say Fox News especially, especially Fox News, has a particular obligation to make sure people know the election wasn’t stolen.”

“In a letter sent from behind bars, a key defendant in the Jan. 6 riot at the U.S. Capitol said he and fellow inmates have bonded in jail, and boasted that those attacking the building could have overthrown the government if they had wanted,” ProPublica reports.

“The letter is signed ‘the 1/6ers’ and expresses no remorse for the assault on the Capitol, in which five people died. While no names appeared on it, ProPublica was able to determine, through interviews with his family and a review of his correspondence from jail, that it was penned by Guy Reffitt, a member of the Three Percenter right-wing militant group accused of participating in the riot.”

House Republicans on Friday elevated Rep. Elise Stefanik (R-NY) to replace Rep. Liz Cheney (R-WY) as the party’s conference chair, CNN reports.  She won in a 134 to 46 secret ballot vote against Rep. Chip Roy (R-TX).  Just a reminder that Cheney was ousted by a voice vote.

“I also want to thank President Trump for his support. He’s a critical part of our Republican team.” — Rep. Elise Stefanik, after being elected as House GOP Conference Chair.

The top four members of House Republican leadership — Kevin McCarthy, Steve Scalise, Elise Stefanik and Gary Palmer — all voted to overturn the 2020 presidential election results after the insurrection at the Capitol on January 6.

If Republicans control the House after the 2024 election, it’s easy to see how they might not certify a Democrat winning the presidential election.

A former confidant of Rep. Matt Gaetz (R-FL) admitted in court papers on Friday to an array of federal crimes — including sex trafficking of a minor — and agreed to cooperate with the Justice Department’s investigations, handing prosecutors a potential key witness as they decide whether to charge Mr. Gaetz, the New York Times reports.

“Greenberg admitted that he and unidentified others had paid a 17-year-old girl for sex and that he had provided her with drugs. He admitted that he ‘introduced the minor to other adult men, who engaged in commercial sex acts’ with her and that he was sometimes present.”

“A Florida politician who is central to the investigation into Rep. Matt Gaetz for possible sex trafficking of a minor signaled that he will plead guilty in his own federal case, a troubling development for the congressman as it suggests prosecutors have secured a potentially important witness against him,” the Washington Post reports.

Politico: “Federal investigators are intensifying their sex-crimes probe of Rep. Matt Gaetz as they discuss a potential immunity arrangement with his former girlfriend and have struck a tentative deal with his one-time ‘wingman’ who will likely plead guilty.”

“The U.S. Department of Justice’s Public Integrity Section also continues to interview potential witnesses who could provide prosecutors with evidence against Gaetz.”

Neil Irwin: “Ultimately, what matters more than whatever the bond market does is how ordinary Americans who make everyday economic decisions — demanding raises or not, paying more for a car or not — view things. Can they wait for the complex machinery of the American economy to fully crank into gear?”

Greene calls Ocasio-Cortez “crazy eyes” and tells her through the office’s mailbox slot to “get rid of your diaper.”

“This is a woman that’s deeply unwell and clearly needs some help… At this point, I think, the depth of that un-wellness has raised concerns for other members… I’m concerned about her perceptions of reality.” — Rep. Alexandria Ocasio-Cortez, in an interview with the Washington Post, on Rep. Marjorie Taylor Greene (R-GA).

“The hacker group DarkSide, which was responsible for a ransomware attack that shut down the Colonial Pipeline and led to fuel shortages in multiple states this week, claims to be shutting down,” Axios reports.

“In a message from a cybercrime forum, the group said it had lost access to the infrastructure needed to carry out its extortion operations and that a cryptocurrency account it uses to pay its affiliates had been drained.”

“The company paid the hefty ransom in untraceable cryptocurrency within hours after the attack, underscoring the immense pressure faced by the Georgia-based operator to get gasoline and jet fuel flowing again to major cities along the Eastern Seaboard.”

“Some Senate Democrats are open to paying for a compromise infrastructure package by imposing user fees, including increasing the gas tax and raising money from electric car drivers through a vehicle-miles-traveled charge,” Axios  reports.

“By inching toward the Republican position on pay-fors, some Democrats are bucking President Biden’s push to offset his proposed $2.3 trillion plan by focusing only on raising taxes on corporations and the wealthy.”

“The White House on Friday said that Republicans’ idea to impose user fees for infrastructure spending would ‘violate’ President Biden’s promise not to raise taxes on Americans making less than $400,000 annually,” Axios reports.

Said Sen. Mark Warner (D-VA): “I’m generally supportive of what the president is trying to do, but I think his initial unwillingness to include user fees makes it really hard.”

Wall Street Journal: “President Biden asked a group of Republican senators to flesh out their $568 billion infrastructure proposal with additional details, including how they would pay for it, a step that could begin more substantive negotiations on the issue.”

Angela Nagle: “During the Trump years, while many were relishing the carnivalesque thrill of ‘owning the libs’, the libs were rethinking themselves and plotting their route back to power. Within four years they had consolidated the elites into a united front, while American elites have become more united than ever.”

“What the liberals have done is to synthesize appealing elements of each of their rivals once in power while also appearing more moderate than either. Their policy proposals have included major national infrastructure spending, including expanding the train system, a capital gains tax increase and a withdrawal of troops from Afghanistan. Whether they fulfill these promises is another question, I know. I have to be honest though. These are good policies.”

The Atlantic: “While Kavanaugh’s allies insist that those comments were misinterpreted, they also say that he still privately seethes over the ‘smear campaign’ he believes he endured.”

Said one friend: “He’s made an effort to say, ‘Look, I’m not bitter about this. I’m moving forward.’ But I assume, when he’s lying in bed at night, it’s hard not to think about it.”

Said another friend: “He was really angry at Democrats for what they did to him and his family.”

“And yet, those same friends also describe a competing impulse in Kavanaugh—a burning desire to gain readmission into polite society and enjoy all the perks associated with one of the world’s most prestigious jobs.”

Speaker Nancy Pelosi said masks will still be required for members of Congress and staff on the House floor despite new guidance from the CDC because the vaccination status of members, meaning Republicans, is not known, Bloomberg reports.

“In a dramatic shift that comes amid fighting in the Gaza strip and clashes between Jewish and Arab citizens in Israel, right-wing kingmaker Naftali Bennett has announced he will no longer seek an alternative government to oust Prime Minister Benjamin Netanyahu,” Axios reports.

“Bennett had been on the verge of a power-sharing deal with centrist opposition leader Yair Lapid that would have made him prime minister for two years until Lapid rotated into the job. Without Bennett, Lapid has no path to a majority, and Israel will almost certainly head for its fifth election since 2019 with Netanyahu still in his post.”

Netanyahu has more political lives than any politician today.

USA Today: “An infusion of $350 billion in federal COVID-19 rescue funds now headed to local and state governments this week sets up a new – and welcomed – dilemma: how to spend a financial windfall.”

“Two months after President Joe Biden signed his American Rescue Plan into law, the Treasury Department on Monday made available a historic amount of direct aid to thousands of city and county governments. Local governments are in line to collectively receive more than $110 billion over two years in addition to $125 billion for the reopening of public schools. Another $195.3 billion will go to states.”

“In fact, the Democratic majority says it has no intention of negotiating with Republicans bent on slashing spending as a condition for avoiding default after the July 31 deadline. Democrats say they won’t haggle with the minority party over the faith and credit of the United States, citing lessons from the presidency of Barack Obama.”

“The diametrically opposed views heading toward a cutoff point that regularly vexes Washington could become highly consequential as Congress labors to cut bipartisan deals on a host of issues.”

“New York prosecutors have subpoenaed a Manhattan private school as they seek the cooperation of the Trump Organization’s chief financial officer in their investigation of former President Donald Trump and his company,” the Wall Street Journal reports.

“The subpoena seeks information from Columbia Grammar & Preparatory School, where grandchildren of Trump Organization CFO Allen Weisselberg are students… From 2012 to 2019, more than $500,000 of the children’s tuition was paid for with checks signed by either Mr. Weisselberg or Mr. Trump.”

The United States is now approaching 600,000 known deaths during the coronavirus pandemic. The actual number is likely much higher.  For comparison, the population of Wyoming is 578,000.

Dr. Anthony Fauci told CBS News that he doesn’t “understand what the problem is” with Sen. Rand Paul (R-KY) after he once again had a heated exchange with the senator during hearings.

Said Fauci: “You know, I just don’t want to get into that tit-for-tat. I just don’t understand what the problem is with him. Well I’m just gonna do my job and he can do what he wants to do and we’ll see what happens.”

“He noted that the state’s $35 billion budget approved by lawmakers last week didn’t provide the funding he had requested for an expansion of Medicaid.”