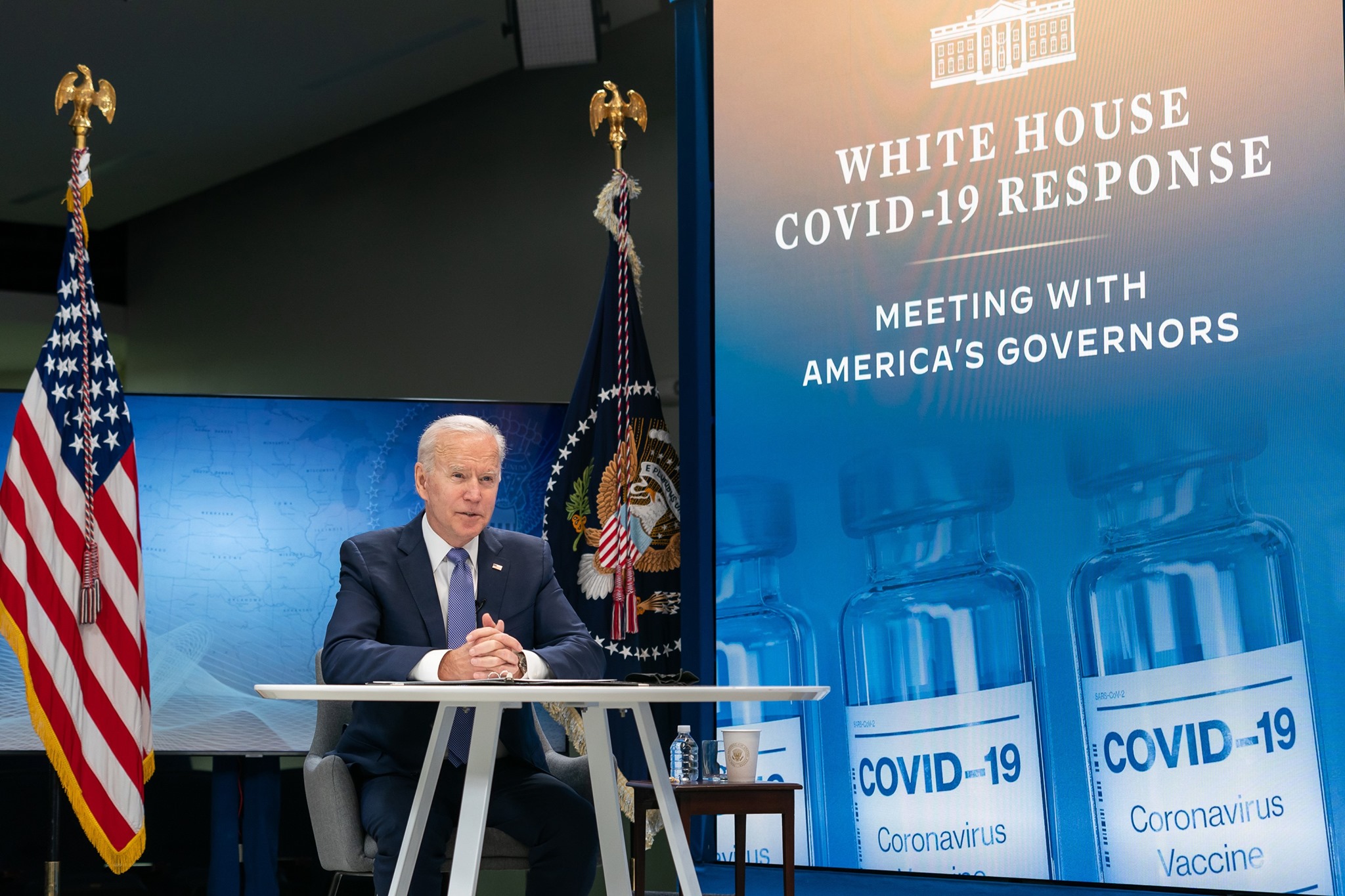 “The CDC will ease indoor mask-wearing guidance for fully vaccinated people, allowing them to safely stop wearing masks inside in most places,” the AP reports. It will be interesting to see how quickly businesses and governments implement the guidance. There’s a lot of inertia to overcome.

Ben Wakana, of the White House COVID-19 Response Team, offered these reasons why masks can come off now:

Philip Bump: The vaccination slowdown has slowed down.

“Randi Weingarten, president of the nation’s second-largest teachers’ union, called on Thursday for a full reopening of the nation’s schools for the next academic year,” the New York Times reports.

Said Weingarten: “There is no doubt: Schools must be open. In person. Five days a week.”

Axios: “The release of video comes a day after Republican members of Congress sought to downplay the Jan. 6 events, with some lawmakers calling the rioters ‘peaceful patriots’ and comparing them to tourists.”

This doesn’t look like a normal day of tourists in the Capitol to me.

The Week: “Washington’s top leaders sparred over a provision of Biden’s bill that would incentivize electric vehicle production, taxes, and the very definition of infrastructure, according to several accounts of the meeting. They agreed on the general need to upgrade U.S. physical infrastructure like roads, bridges, airports, and broadband. But McConnell and McCarthy also laid out their ‘red line’ for a package: No new taxes.”

Pelosi said: “I would not take anything off the table and I’m not drawing any red lines.”

Politico: “A raft of influential progressive and environmental groups has a message for the Biden White House on its efforts to cut an infrastructure deal with Republicans: Don’t say we didn’t warn you.”

“They are sounding the alarms that compromising with Republicans on a scaled-down infrastructure bill — and spending the time that such a deal might require — could make it increasingly difficult to pass the rest of Biden’s sweeping agenda.”

Washington Post: “In their meetings, the president sent the message to both Manchin and Sinema that he wants them to have a voice in how a massive infrastructure package is crafted, inviting them to identify hard-to-refuse pet projects in their states and signaling a real attempt at bipartisanship, all with the intent of getting them to feel invested in the package early on.”

“Much of the strategy is being driven by chief of staff Ron Klain.”

Mother Jones: “As a progressive in one of the nation’s most conservative state legislatures, Sinema abandoned her early radicalism for a new theory of change.”

“She learned to play nice, seeking incremental progress through careful messaging and across-the-aisle relationships, and reinventing herself as a post-partisan deal-maker. But her success was also powered by an army of activists—outsiders like she had once been—operating on a far different theory of change.”

“Now, for the first time in her career, she holds real power.”

“Jobless claims declined to a new pandemic low last week, in a sign hiring is primed to strengthen as workers return to the labor market,” the Wall Street Journal reports.

“Unemployment claims fell to 473,000 last week from a revised 507,000 a week earlier… Claims are now at the lowest level since mid-March 2020, when the pandemic shut down the economy. They remain more than twice as high as levels seen before the pandemic struck last spring.”

Washington Post: “Over the past week, the Biden administration has been met with disappointing economic benchmarks, including lackluster hiring and a surge in consumer prices. Meanwhile, rising gas prices and fuel shortages have hammered the Southeast. These pressures have weighed on the financial markets, as the Dow Jones industrial average and the S&P 500 fell sharply for the third day in a row. … The latest economic tremors may try the White House’s willingness to aggressively press major new policy changes.”

“Advisers close to the Biden administration describe the current juncture as a key test of its commitment to major economic policy change in the face of escalating attacks from business groups and the GOP.”

Politico: “House GOP leaders were preparing to walk on stage for a press conference in Orlando sixteen days ago when one of Liz Cheney’s colleagues delivered her a warning. Cheney was bound to get asked about Donald Trump and Jan. 6, her fellow Republican cautioned her, counseling her to pivot away from the question. She didn’t take the advice. Cheney buckled down, splitting with House Minority Leader Kevin McCarthy on the scope of a commission to probe the Capitol riot and citing ‘ongoing criminal investigations’ when asked if Trump should be charged for inciting the insurrection.”

“That dismissal of her colleague’s advice, recounted by a Republican source briefed on the conversation, ultimately changed the trajectory of Cheney’s political future.”

She added: “I think he is not leading with principle right now. I think that it is sad, and I think it’s dangerous.”

Sen. Joe Manchin (D-WV) told ABC News “that he intends to support the John Lewis Voting Rights Act, a more narrowly tailored piece of voting rights legislation that he said he believes could muster bipartisan support even as voting legislation is becoming a flash point between the two parties.”

“Manchin’s announcement comes following a contentious markup of the Democrat-led voting reform act, the For the People Act, that deadlocked in the Rules Committee Tuesday … Manchin said Tuesday’s mark-up made clear to him that the robust Democratic bill, which he has already said he does not support, has no hope of mustering the necessary 60 votes to pass.”

New York Times: “The next time the world faces an outbreak of a fast-spreading and deadly new pathogen, governments must act swiftly and be ready to restrict travel or mandate masks even before anyone knows the extent of the threat.”

“Pandemics, the authors concluded, are an existential threat on the order of a chemical or nuclear weapon, and preparing for them must be the responsibility of the highest levels of political leadership rather than only health departments, often among the least powerful of government agencies.”

New York Times: “According to a new U.S. Census estimate, some 30 million American adults who are open to getting a Covid vaccine have not yet managed to actually do so. Their ranks are larger than the hesitant — more than 28 million who said they would probably or definitely not get vaccinated, and than the 16 million who said they were unsure.”

“If the attention has centered on the vaccine hesitant, these are the vaccine amenable. In interviews, their stated reasons for not getting vaccines are disparate, complex and sometimes shifting. They are, for the most part, America’s working class, contending with jobs and family obligations that make for scarce discretionary time.”

Ohio Gov. Mike DeWine (R) on Twitter:  “Two weeks from tonight on May 26th, we will announce a winner of a separate drawing for adults who have received at least their first dose of the vaccine. This announcement will occur each Wednesday for five weeks, and the winner each Wednesday will receive one million dollars.”

Minnesota Gov. Tim Walz (D) joked during a meeting with President Biden and other governors that state residents should “go get vaccinated so you’re alive to vote against me in the next election,” The Hill reports.

Said Walz: “My message to folks is there’s a lot of good reasons to get vaccinated, but for some of them, you know, if you need another one, go get vaccinated so you’re alive to vote against me in the next election. I don’t care. I just want to get it done.”

When she was ignored, Greene reportedly pursued AOC and started screaming about Black Lives Matter: “You don’t care about the American people. Why do you support terrorists and antifa?”

Idaho Gov. Brad Little (R) has signed legislation aimed at thwarting a half-dozen executive actions by President Joe Biden to combat gun violence, the Idaho Statesman reports. The new law came less than a week after a shooting at an eastern Idaho middle school injured two students and a custodian.

Michigan state Rep. Matt Maddock (R), who’s been at the center of efforts to question the 2020 election, introduced a bill that would require “fact checkers” to register with the state, the Detroit News reports. Fact checkers found to be in violation of the registry requirements could be fined $1,000 per day of violation.

“Former White House counsel Don McGahn will sit for a closed-door interview with House Democrats as part of an agreement to end a nearly two-year legal battle between the Trump White House and Congress,” The Hill reports.

Forbes: “Attorneys Arthur Aidala and Barry Kamins said they were appearing on behalf of Giuliani as his attorneys in federal court filings Wednesday in the Southern District of New York related to the search warrant executed on Giuliani’s apartment.”

Bloomberg: “White House national security aides have held several meetings about the issue in recent days to trade ideas, discussing options including a mass evacuation of thousands of people to a third country where they could be processed and brought to the U.S.”

“The likeliest scenarios for the U.S. would involve extracting Afghans through the existing special immigrant visas program, which has a long backlog, and allowing Afghan interpreters to seek refugee status … The White House is getting closer to presenting options to advocates and members of Congress impatient with the silence from President Joe Biden … But with U.S. forces due to fully depart Afghanistan by Sept. 11, there’s little time left.”

Politico: “The [Biden] executive order [on strengthening cyber defenses], which has been in development for months, addresses federal computer networks — not the critical infrastructure operated by private companies such as Colonial Pipeline, which suffered a major ransomware attack that led to hoarding and gasoline shortages throughout the eastern U.S.”

“But some of the directive’s provisions could also influence how the Biden administration works to secure the United States’ poorly protected infrastructure facilities.”