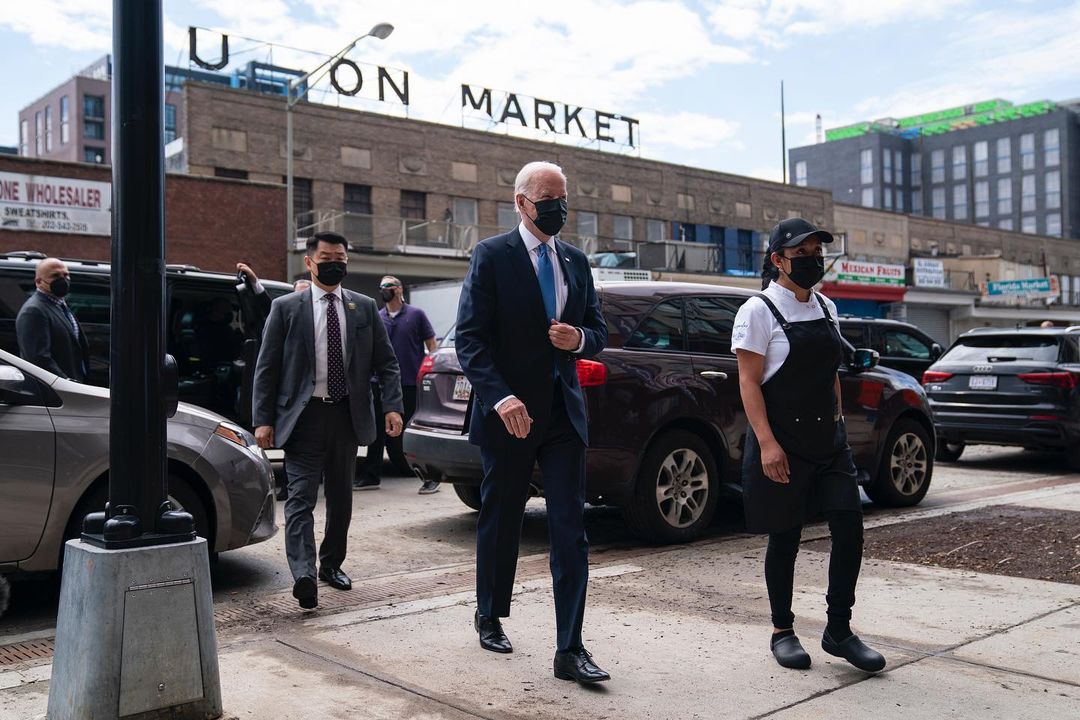 When asked if she would consider running for president in 2024, Rep. Liz Cheney (R-WY) told the Today Show that she would do “whatever it takes” to prevent “a former president or anybody else unravel the democracy.”

Arizona Republic: “The Arizona Senate-ordered audit of Maricopa County’s general election will take a one-week hiatus at the end of the week to make way for high school graduations at Veterans Memorial Coliseum in Phoenix.”

“The plan is to move the ballots and equipment to another area of the Arizona State Fairgrounds on Friday and move back in on May 23 to pick back up on May 24.”

Clean Virginia, an environmental advocacy group that has endorsed Democrat Jennifer Carroll Foy and donated heavily to her campaign, is now running a TV ad campaign on her behalf. The organization’s new spot praises Carroll Foy for championing legislation that required Dominion Energy, the state’s mammoth energy producer, to clean up coal ash that had tainted groundwater. There’s no word on how big Clean Virginia’s buy is, but the group and the wife of its founder have given $1.1 million directly to Carroll Foy’s campaign so far.

Josh Kraushaar: “From the Republican stronghold of Texas to Democratic-leaning Virginia to blue New Mexico, Republicans have been rallying behind traditional candidates in the first wave of nominating fights taking place in 2021.”

“All the successful candidates have been supportive of Trump (he’s endorsed two of them) but have avoided the extreme rhetoric and conspiracy theorizing that defined his presidency.”

“If Trump doesn’t sabotage the interests of his own party, Georgia-style, it’s easy to see the stirrings of a Republican rebound, as voters choose electable standard-bearers in unlikely places.”

“National and state Democratic officials have reached a joint fundraising deal to increase aid to state parties, with an extra boost for those in Republican-dominated states,” the AP reports.

“The agreement, which follows weeks of negotiations, is intended to allow the party’s wealthiest backers to contribute up to $875,000 annually to a combined fund that, under federal campaign finance rules, can be distributed to party accounts around the country.”

NEW YORK CITY MAYOR — Former city Sanitation Commissioner Kathryn Garcia on Tuesday earned the backing of the New York Times, which is arguably one of the few newspaper endorsements capable of moving voters in a Democratic primary. 2020 presidential candidate Andrew Yang, meanwhile, picked up the support of Rep. Grace Meng, who represents northeastern Queens in Congress.

Stringer lost a number of endorsements in the days after a woman named Jane Kim accused him of sexually assaulting her in 2001, but these two groups have remained in his corner. A.F.T. head Randi Weingarten said Sunday, “Am I troubled by the allegations? Of course … I’m also a unionist who has dealt with false allegations.”

In her first TV ad for the June 22 Democratic primary, attorney Maya Wiley talks about the adversity she’s overcome in her life. Wiley tells the audience, “I was 9 when I watched my dad die, and it devastated me. But his life and passion for equality inspired me.” She continues by talking about her work in the ACLU and NAACP before pledging she’ll “work my tail off to save a generation of kids from the trauma of crime and injustice, transform the police, and rebuild our economy for all New Yorkers.”

MICHIGAN GOVERNOR — Detroit Police Chief James Craig announced his retirement at a Tuesday press conference after eight years on the job and said he’d make a decision about whether to run for governor in the “weeks” after his departure becomes effective on June 1. According to an unnamed source who spoke with the Detroit News, Craig, who confirmed that he’s a Republican at his press event, has already decided to challenge Democratic Gov. Gretchen Whitmer next year. Craig would be the first Black person elected governor in Michigan.

NORTH CAROLINA 13TH and 5TH CDs — As he previously said he might, law student Bo Hines has dropped his challenge to veteran Rep. Virginia Foxx in the GOP primary in North Carolina’s 5th District and will instead run for the state’s 13th District, which is open because Rep. Ted Budd is seeking a promotion to the Senate.

NEW JERSEY 11TH CD — When the New Jersey Globe asked if he’ll run against sophomore Democratic Rep. Mikie Sherrill, Republican Assemblyman Brian Bergen said “right now, no” and specifically praised 2020 nominee Rosemary Becchi, who is reportedly considering another bid. Bergen said he could conceivably change his mind, but only if “Rosemary’s not running, the map’s different and I think there’s chance to win,” adding he “highly doubt[s]” such a scenario might unfold.

NEW MEXICO 1ST CD — Democrat Melanie Stansbury’s latest ad features a retired police sergeant praising her for securing necessary resources for law enforcement through her work as a state lawmaker. The second half of the spot attacks Republican Mark Moores for opposing Joe Biden’s American Rescue Plan but taking a forgivable $1.8 million loan from the federal government’s Paycheck Protection Program, which was set up through an earlier COVID relief bill.

Stansbury’s ad also calls out a previous Moores ad that claimed that “during the pandemic, Stansbury has done little to lower the taxes on seniors’ Social Security.” But as KOB 4’s Chris Ramirez points out, Moores “splits hairs with a time stamp”: Stansbury sponsored a bill to end the taxation of Social Security benefits in January of last year, just weeks before the pandemic hit the U.S.

TEXAS 30TH CD — Veteran Democratic operative Jane Hamilton, who was Joe Biden’s state director for Texas’ primary last year, has filed paperwork for the 30th Congressional District but says that if incumbent Rep. Eddie Bernice Johnson runs again, she’ll have “my complete support.” The 85-year-old Johnson, who is the second-oldest member of the House, said two years ago that her 2020 campaign would be her last, but she hasn’t confirmed her plans since securing her 15th term in November.

OHIO U.S. SENATOR — A “close associate” of venture capitalist J.D. Vance tells Insider he has formed an exploratory committee for a possible Senate bid. Vance had previously confirmed he was considering joining the GOP field for this open seat.

Vance’s associate believes he will likely join the race, saying it would take an “act of God” to keep him out of the contest. This source added that an announcement from Vance himself could come as early as this summer.

FLORIDA GOVERNOR — The Florida Chamber of Commerce, which has been a vocal supporter of Republican Gov. Ron DeSantis, has released a poll of next year’s governor’s race that, unsurprisingly, shows the incumbent leading several actual and hypothetical Democratic opponents.

The survey, from GOP firm Cherry Communications, shows DeSantis leading Rep. Charlie Crist, the only Democrat who has kicked off a bid, 51-41. The poll also found Desantis up 51-39 on Agriculture Commissioner Nikki Fried and 53-38 on Rep. Val Demings.

While Fried isn’t currently running, that may change soon, as she tweeted on Wednesday that she has an announcement planned for June 1.