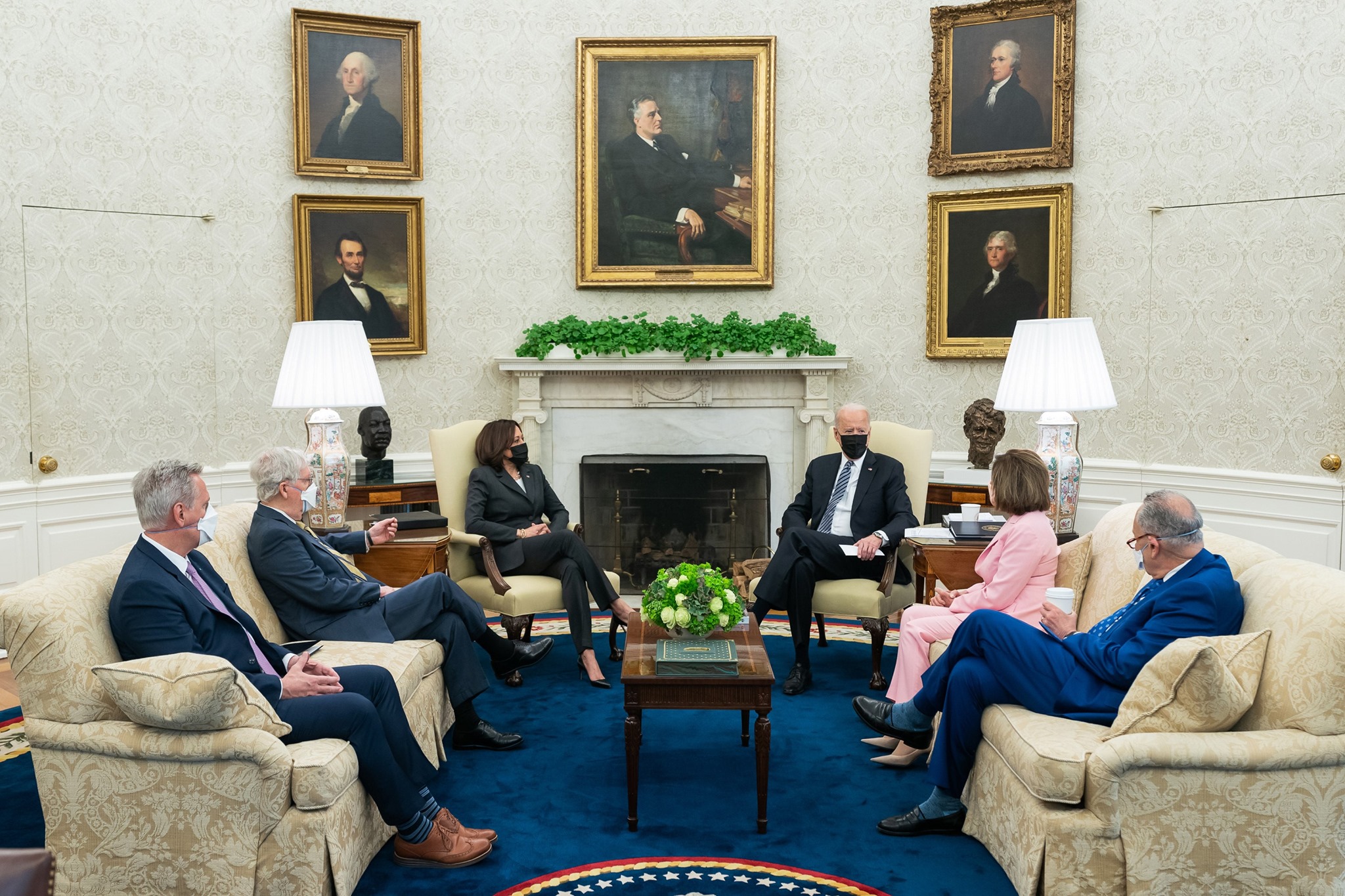 Rep. Liz Cheney (R-WY) was removed from her House GOP leadership post by a voice vote.

Washington Post: “The voice vote to remove her as chair of the House Republican Conference underscored that the party will not tolerate disagreements with Trump, whose active support many argue is needed for the party to win the House majority in the 2022 midterm elections.”

CNN: “Following her removal from House GOP leadership, Cheney tells reporters she will do everything she can to prevent Trump from returning to presidency.”

Ousting Cheney on a voice vote — so no one would have to go on the record — only makes Cheney’s martyrdom more heroic.

“Rep. Liz Cheney vowed Tuesday evening not to remain silent as former President Donald Trump continues to spread lies that the election was stolen from him, striking a defiant tone ahead of an expected vote to remove her from House Republican leadership on Wednesday,” CNN reports.

Said Cheney: “We must speak the truth. Our election was not stolen. And America has not failed.”

She added: “Every one of us who has sworn the oath must act to prevent the unraveling of our democracy. This is not about policy. This is not about partisanship. This is about our duty as Americans. Remaining silent and ignoring the lie emboldens the liar. I will not sit back and watch in silence while others lead our party down a path that abandons the rule of law and joins the former President’s crusade to undermine our democracy.”

Cheney’s speech is worth watching in its entirety.

“Seventeen congressional Republicans supported the second impeachment of former President Donald Trump. Unlike Liz Cheney, most of them want to move on,” Politico reports.

“As Cheney faces ouster from House GOP leadership on Wednesday for continuing to rebut Trump’s election lies, other Republicans who deemed him guilty of inciting insurrection on Jan. 6 are taking an approach that largely spares them intra-party retribution. They stand by their anti-Trump votes and oppose Cheney’s demotion, but they’re focused on strengthening their party’s message against Democratic control of Washington.”

Washington Post: “Rather than focusing on whipping votes to save her job as conference chair, the Wyoming Republican this week has been drafting plans for increased travel and media appearances meant to drive home her case that Trump is unfit for a role in the Republican Party or as the nation’s leader were he to run in 2024.”

“She is also considering an expanded political operation that would allow her to endorse and financially support other Republican candidates who share her view of the danger that Trump poses to the Republican Party and the country.”

Axios: “Cheney will take her case to the public with speeches and other appearances. Cheney and her team has been intentional about painting the stakes as higher than a squabble about a leadership job, but instead about truth and the future of the Republican Party.”

Just an hour after she was ousted from the House GOP leadership, Rep. Liz Cheney (R-WY) sat down for an exclusive interview with Savannah Gutherie of NBC News.

Thanks to Kevin McCarthy, Cheney now has a national platform to say she’s chosen her country over the Republican party.

“I don’t think anybody is questioning the legitimacy of the presidential election. I think that is all over with. We’re sitting here with the president today.” — House Minority Leader Kevin McCarthy, quoted by the Washington Post.

Donald Trump continues to question the legitimacy of the election and Cheney was ousted from the House GOP leadership for pushing back on Trump’s lies.

“We all learned early in life if you can write the rules you can win the game.”  — Sen. Mitch McConnell (R-KY), quoted by HuffPost, discussing his opposition to Democrats’ election reform and voting rights legislation known as the For the People Act.

Said McConnell: “We’re not interested in re-opening the 2017 tax bill. We both made that clear with the president. That’s our red line.”

“As President Joe Biden prepares to welcome top congressional Republicans to the Oval Office for the first time on Wednesday, he appears to be struggling to reconcile a pair of core campaign pledges: to work across party lines — and to advance what he’s called the most progressive governing blueprint since Franklin Delano Roosevelt’s,” NBC News reports.

“While mindful of the challenge in keeping Democrats united behind his plan, Biden sees an even bigger roadblock to any potential bipartisan breakthrough in a Republican Party still largely adrift in the post-Trump era.”

The Hill: Democrats, GOP agree on one thing: They’re skeptical of a deal.

Dan Pfeiffer: “The idea that Biden’s proposals to raise taxes on corporations and the wealthy are a political liability flies in the face of all of the polling as well as basic common sense. If Congressional Democrats shy away from a tax fight, they will be passing up their best opportunity to upend historical trends and expand their majorities in the midterms.”

“Immigration arrests and detentions along the Mexico border rose slightly in April to 178,622, the highest one-month total in two decades, but a decline in the number of teens and children arriving without parents eased pressure on the Biden administration,” the Washington Post reports.

Jeff Greenfield: “As a body, that party has embraced notions about the political process that would have seemed the stuff of parody a decade ago. Donald Trump Jr. was right, in his speech to the crowd just before the Capitol insurrection: this is Trump’s Republican Party, and it’s perfectly united in that conviction. To pretend otherwise—and to pretend that there’s an argument about what it stands for, or some kind of damaging fracture still ahead—is an act of delusion.”

Rep. Paul Gosar (R-AZ), who has repeatedly been criticized for spreading conspiracy theories about the 2020 election and other issues, cast a rioter shot while trying to break into the House chamber as “a veteran wrapped in an American flag” who was “executed,” The Hill reports.

Rep. Andrew Clyde (R-GA) claimed at a House Oversight Committee hearing that there was no insurrection on January 6th and said the people entering the Capitol were just tourists, Bloomberg reports.

Said Clyde: “To call it an insurrection is a bold face lie.”

It’s a surreal scene: Multiple House Republicans are denying key facts about January 6 — even though it’s all on video.

Bloomberg: “From Virginia to Louisiana, convenience stores and corner gas stations are turning away customers as tanks tap out amid panic buying. An extended pipeline disruption could have far-reaching implications for East Coast states dependent on the pipeline, prompting bigger government interventions.”

The Hill: 71% of gas stations in Charlotte area out of fuel.

“Job openings reached a record level of 8.1 million at the end of March, reflecting a widening gap between open positions and workers willing and able to take those roles,” the Wall Street Journal reports.

Axios: “The gains were highest since September 2008, stoking new fears of inflation. Prices jumped significantly compared to the start of the pandemic last year, when lockdowns drove down demand.”

Federal investigators scrutinizing Rep. Matt Gaetz (R-FL) are seeking the cooperation of a former Capitol Hill intern who was once a girlfriend of the Florida Republican, CNN reports.

“Violence between Israelis and Palestinians approached all-out war on Tuesday as rocket attacks on Israeli cities and airstrikes in the Gaza Strip killed dozens, injured hundreds and left thousands of people on both sides cowering under day-long bombardments,” the Washington Post reports.

“Military officials in both camps girded for the battles to escalate further, with Israel calling up eight battalions of reservists and deploying additional artillery batteries in the communities near Gaza that have become the front line of the confrontation.”

“Joe Biden has chosen Rahm Emanuel, a former congressman and Chicago mayor, to be US ambassador to Japan,” the Financial Times reports.

New York Times: “The desperation that engulfed New Delhi, India’s capital, over the past few weeks is now spreading across the entire country, hitting states and rural areas with many fewer resources. Positivity rates are soaring in those states, and public health experts say that the rising numbers most likely fall far short of giving the true picture in places where sickness and deaths caused by Covid-19 are harder to track.”

Reuters: Indian health agency chief says most of country should remain locked down for 6 to 8 weeks.

This is worth watching: Former Obama speechwriter David Litt confronted Newsmax host Rob Finnerty during a segment — intended to be about Elon Musk hosting Saturday Night Live — over the network’s promotion of  conspiracy theories about Donald Trump winning the 2020 election.

Associated Press: “Eager to the turn the page on the Trump years, the Biden White House is launching an effort to unearth past problems with the politicization of science within government and to tighten scientific integrity rules for the future.”

“A new 46-person federal scientific integrity task force with members from more than two dozen government agencies will meet for the first time on Friday. Its mission is to look back through 2009 for areas where partisanship interfered with what were supposed to be decisions based on evidence and research and to come up with ways to keep politics out of government science in the future.”

Associated Press: “For 50 years the Minuteman missile has been armed and ready, day and night, for nuclear war on a moment’s notice. It has never been launched into combat from its underground silo, but this year it became the prime target in a wider political battle over the condition and cost of the nation’s nuclear arsenal.”

“Minuteman was not intended to last half a century, so it’s overdue to be replaced or refurbished. Some see this as a moment to push for scrapping it altogether, abandoning one leg of the traditional nuclear ‘triad’ — weapons that can be launched from land, sea and air. Most in Congress favor keeping the land-based leg by replacing Minuteman with a new missile; President Joe Biden’s position is not yet clear.”

Washington Post: “That ‘Biden is president’ line, though, is where many of Rep. Elise Stefanik’s peers have landed. It’s an almost platonic way of bridging Trumpland with the real world, stating an undeniable fact while sending a clear message to the base that you won’t let the Lamestream Media trip you up. At times, it’s delivered with a self-aware sense of just how clever an escape hatch it is.”

Said Garland: “Specifically those who advocate for the superiority of the white race.”