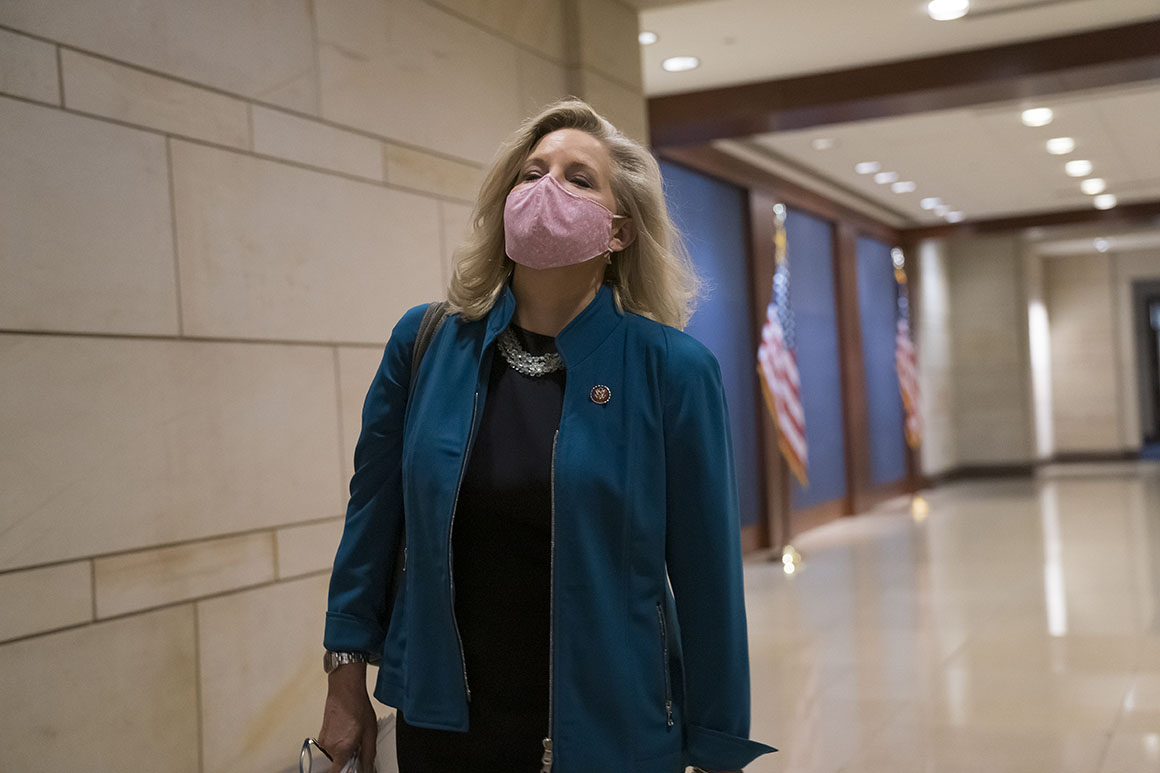 A new Engagious/Schlesinger focus group of swing voters holds a near-unanimous view that Minority Leader Kevin McCarthy and his caucus are making a mistake by removing Rep. Liz Cheney (R-WY) from the House GOP leadership.

“Nine of 14 voters said they could vote for a Republican for U.S. House or Senate races next year. All but one ruled out backing any candidate who clings to the former president’s lie that the 2020 election was stolen from him.”

Key finding: “13 of the 14 said Cheney should not be removed and that it would be a mistake for House Republicans to go through with their plans.”

A new Politico/Morning Consult poll finds 50% of Republican voters think Rep. Liz Cheney should be removed from her leadership role, while only 18% think she should keep it.

“More than 100 Republicans, including some former elected officials, are preparing to release a letter this week threatening to form a third party if the Republican Party does not make certain changes,” the New York Times reports.  “The statement is expected to take aim at Donald J. Trump’s stranglehold on Republicans, which signatories to the document have deemed unconscionable.”

NBC News: “The election saw a dramatic rise in registration and voting by some 18.7 million Latinos, so that about 1 in 10 voters was Latino.”

“Before 2020, the percent of Latinos eligible to vote who actually voted had never surpassed 50 percent.”

“But it hit 53.7 percent in November to help Democrat Joe Biden unseat then-President Donald Trump, a Republican. That compares to 47.4 percent in 2016, when Trump defeated Democrat Hillary Clinton.”

“Arizona Republicans passed a law on Tuesday that will sharply limit the distribution of mail ballots through a widely popular early voting list, the latest measure in a conservative push to restrict voting across the country,” the New York Times reports.

“The legislation will remove voters from the state’s Permanent Early Voting List, which automatically sends some people ballots for each election, if they do not cast a ballot at least once every two years.”

Cook Political Report: “Youngkin winning is certainly encouraging good news for Republicans, but Democrats still have the recent history and ideological shift in the state on their side. We initially rated this race Likely Democrat, and for now we are keeping it there until we know officially who the Democratic nominee is after the June 8 primary.”

“While it’s McAuliffe, who was barred from running for a second consecutive term, is the obvious frontrunner, there’s a question of what Black turnout could be in November as well given the former governor is running against two African-American women candidates in former state Del. Jennifer Carroll Foy and state Sen. Jennifer McClellan who are looking to make history as the first Black female governor in U.S. history. And we need to see data that we just don’t have now on how a McAuliffe vs. Youngkin race starts out.”

CALIFORNIA GOVERNOR — “Republican gubernatorial candidate Caitlyn Jenner told CNN this week that she never voted for president in the November 2020 election and opted to golf instead because she ‘couldn’t get excited’ about the dozen measures on the California ballot,” Politico reports.

GEORGIA U.S. SENATOR / ATTORNEY GENERAL –As expected, Republican Attorney General Chris Carr has announced that he’ll seek re-election rather than run for the Senate, though he’ll likely face a competitive race for a second term as Georgia’s top law enforcement official. That’s because two notable Democrats have already launched bids of their own: former prosecutor Charlie Bailey, who lost to Carr 51-49 in 2018, and state Sen. Jen Jordan, who flipped a historically Republican district in the Atlanta area in a 2017 special election.

MARYLAND GOVERNOR — Businessman Mike Rosenbaum announced a campaign for governor on Tuesday, joining an increasingly crowded field of Democrats looking to succeed term-limited Republican Gov. Larry Hogan. Maryland Matters describes Rosenbaum as “a Baltimore tech entrepreneur who has been active in the city’s civic and philanthropic scene for the past two decades.”

NEW JERSEY GOVERNOR — Democratic Gov. Phil Murphy has launched his first TV ad ahead of his re-election bid this fall. The spot, part of a $5 million buy in the pricey New York and Philadelphia media markets, focuses on the difficulties the state has faced during the coronavirus pandemic and lays out Murphy’s priorities for the future. Murphy has no primary opponents, so this ad serves as a kickoff to his quest to become the first Democratic governor to win re-election in the Garden State in 44 years.

It also allows the governor to maximize his campaign spending, since he faces a cap after opting into the state’s public financing system. Under the law, candidates receive two-to-one matching funds based on their fundraising but are limited to spending $7.3 million in the primary and $15.6 million in general election. That cap doesn’t roll over after the primary, though, so Murphy’s taking the opportunity to put his name and face before voters now even though he’s unopposed for the Democratic nomination.

The New Jersey Globe also notes that Murphy’s ad comes in response to the commercials former Assemblyman Jack Ciattarelli has run, which decry the governor’s handling of the pandemic and economy. Ciattarelli, who is the GOP’s likely nominee, has spent $2 million on ads since March.

FLORIDA 13TH CD —  The Tampa Bay Times reports that state Rep. Michele Rayner, who last year became the first LGBTQ Black woman elected to the Florida legislature, is “rumored to be considering a run” for the open 13th Congressional District.

Democratic state Rep. Ben Diamond announced on Monday that he will also run for Florida’s 13th Congressional District, which is open because Democratic Rep. Charlie Crist is running for governor. With former Defense Department official Eric Lynn already in the race, Diamond’s decision sets up a possible redux of his successful primary campaign in 2016, when he defeated Lynn 54-46 en route to a victory that fall for an open seat in the state House.

Russo joins 2020 candidate Daniel Kilgore in the Democratic field, but the pair may soon have company, as Franklin County Auditor Michael Stinziano filed paperwork with the FEC for a potential bid. The Columbus Dispatch notes that Stinziano has not made a final decision on running but he’ll have to move quickly, as filing for the Nov. 2 special election closes on May 17.

Democratic state Sen. Tina Maharath, who’d been considering a bid in the special election for Ohio’s 15th Congressional District, says she will not run.

CALIFORNIA 21ST CD — Democrat Bryan Osorio, who was elected the mayor of Delano (pop. 54,000) last year at the age of 25, has filed paperwork with the FEC ahead of a possible bid against Republican Rep. David Valadao in California’s 21st Congressional District. Former Assemblywoman Nicole Parra is already running under the Democratic banner (though she has a long history of backing Republicans), while former Rep. TJ Cox, whom Valadao ousted in a rematch last year, says he’s awaiting the outcome of redistricting before making a final decision.

FLORIDA U.S. SENATOR — Former Rep. Alan Grayson tells Politico that he’ll decide whether to run for the Senate again “in the next two to three weeks.” Grayson got crushed in the Democratic primary in 2016 by then-Rep. Patrick Murphy, losing by a 59-18 margin.

Rep. Stephanie Murphy (D-FL) is planning to announce a campaign for the U.S. Senate in Florida against Sen. Marco Rubio (R-FL) in early June, Axios reports. “Murphy is a proven fundraiser. Jumping in now would give her an early start to build her case for the Democratic nomination and potentially force Rubio and allied GOP groups to spend heavily to retain a seat in a state that’s trending Republican.”

WYOMING AT LARGE CD — Attorney Darin Smith became the latest Republican to challenge Rep. Liz Cheney in next year’s primary when he announced a bid on Friday. Smith finished a distant fourth to Cheney in the 2016 primary, when Wyoming’s lone House district came open due to a retirement, but he’d reportedly been recruited by nameless elements of Trumpworld. He also actually managed to secure the URL “mrsmithgoestowashington.com,” though weirdly, it redirects to another domain.

Liz Cheney has now gone on record saying she’ll do everything she can to keep Trump out of the Oval Office. She has plenty of options, but most come with major drawbacks.

She can use her newfound fame to become a national voice against the Big Lie, but that won’t likely permeate much beyond the Beltway. If anything, it just further prods Trump to run again. She or an ally could run for the Republican nomination for President, but they’d almost certainly fare poorly against Trump.

There’s really only one option for her is she’s genuinely serious about preventing a Trump victory in 2024: organizing her own party, getting on the ballot in crucial swing states, and skimming a few points off of Trump’s totals.

It’s not a likely option: that’s a lot of work just to gift wrap Democrats another term. And Trump might not even run again. But there has been–and only ever will be–one way to defeat Trumpism: Republicans consistently losing elections.

As Trump himself has shown, even the threat of being willing to shave a few points off key elections gives one great power over the direction of the GOP. Liz Cheney is in the unique position to leverage that same weakness and ensure Trump never returns to national office–we’ll see just how serious she is about it.