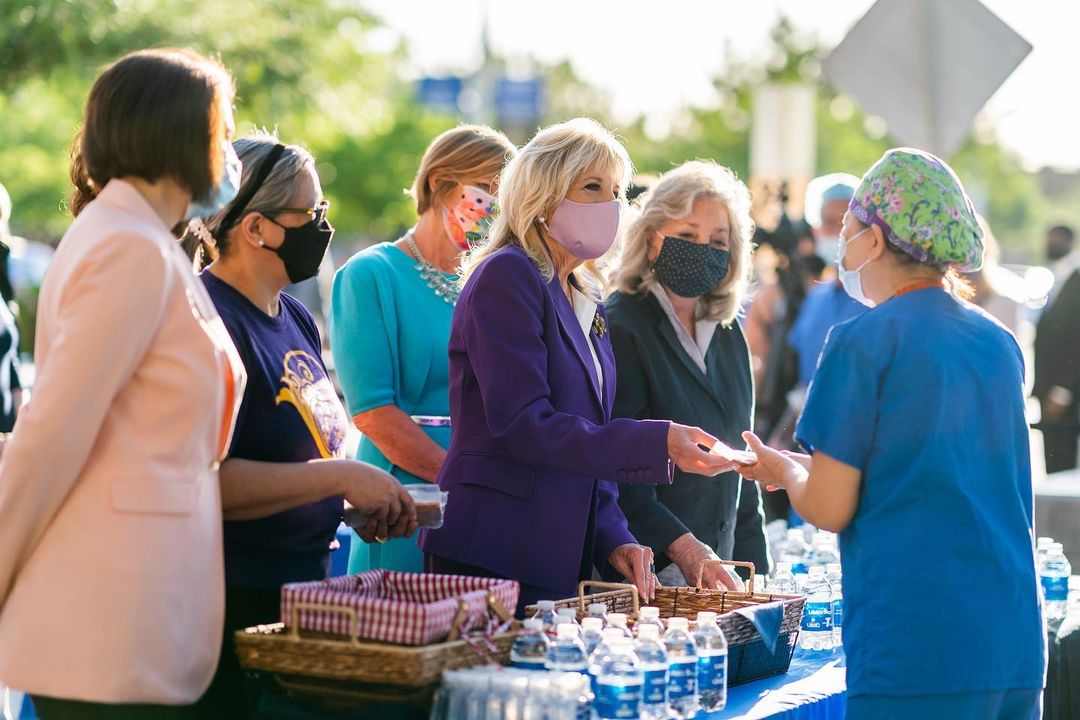 When it comes to the new Democratic president’s handling of the pandemic, 71% of Americans approve, including 47% of Republicans.

With 95% of the votes in for the Virginia GOP gubernatorial nomination — but before any candidates have been eliminated in the coming rounds of ranked choice voting — VPAP reports that Glenn Youngkin leads the race with 32%, followed by Pete Snyder (R) at 26%, and Amanda Chase at 21%.

“It makes us look like idiots. Looking back, I didn’t think it would be this ridiculous. It’s embarrassing to be a state senator at this point.” — Arizona state Sen. Paul Boyer (R), quoted by the New York Times, on the election “audit” being undertaken by state senate Republicans.

Former city Sanitation Commissioner Kathryn Garcia opens her commercial by saying, “To rebuild from the pandemic, we can’t just wing it. I have a plan to build a healthier, more livable city.” After calling for livable wages, “safe neighborhoods, and police accountability,” Garcia, who dons a leather jacket and sunglasses, describes herself as “New York City’s go-to-crisis manager” over the last 14 years. The audience then sees she’s encased in a red box with “in case of emergency, break glass” lettering, which the candidate leaves by smashing her way out.

Meanwhile, 2020 presidential candidate Andrew Yang is spending $1.5 million on his opening ad buy, beginning with a spot which he declares, “I am sick and tired of hearing what we cannot do, New York City!” Yang, who is shown talking to a diverse assortment of voters, dancing to the beat of drums, and riding Coney Island’s Cyclone roller coaster, also calls for “cash relief,” opening schools, and “a people’s bank to help small businesses grow.”

Finally, Brooklyn Borough President Eric Adams begins his initial ad, “I’ve seen rough times, and I’ve got the calluses to prove it.” After saying that he grew up in a struggling household, the candidate continues, “I was “beaten by police at 15. So I became a police officer to battle racism from within.” Adams pledges to “be a blue-collar mayor” who will “rebuild our economy while tackling violent crime.”

OHIO 11TH CD — Cuyahoga County Councilwoman Shontel Brown has released her first TV ad of the race in which she emphasizes that she’ll work with Joe Biden “to stop gun violence and provide economic relief for families.” She also says that’s how she differs from her top rival in the Democratic primary, former state Sen. Nina Turner, featuring a clip of a newscaster saying to Turner, “You’ve been highly critical of President-Elect Joe Biden.” The ad doesn’t get into any specifics, though several months after Biden secured the nomination last year, Turner compared voting for him to eating “a bowl of shit.”

The size of the ad buy is reportedly just $4,000, though it’s always possible that could increase, especially since the special election primary is not until Aug. 3.

MARYLAND GOVERNOR / 6TH CD — Democratic Rep. David Trone had been considering a bid for Maryland’s open governorship next year, but he announced on Friday that he’d seek re-election for a third term instead. That still leaves the question of what former Del. Aruna Miller will do: Earlier this year, she created a campaign committee with the FEC that would allow her to run for the 6th District but said she was only doing so in the event that Trone sought a promotion. Miller, who lost the 2018 primary to Trone 40-31, wound up raising $229,000 during the first quarter, but she hasn’t yet confirmed whether she still intends to defer to the incumbent.

GEORGIA GOVERNOR — Former state Rep. Vernon Jones has commissioned a survey by Remington Research Group that shows him narrowly trailing Gov. Brian Kemp in a hypothetical GOP primary, but Georgia Republicans are casting doubt on the numbers. Remington finds Kemp up just 39-35, but the Atlanta Journal-Constitution calls the poll “silly” and says, “Suffice it to say we have not found one person with proven knowledge about Georgia politics who believes the poll is credible.” Reporter Greg Bluestein says “independent polls” he’s seen have shown Kemp up by giant margins, though so far, no one has released contrary data.

NORTH CAROLINA U.S. SENATOR — Republican Rep. Dan Bishop didn’t rule out a bid for Senate last year, but he has now, since he just endorsed fellow Rep. Ted Budd for the job. Bishop’s statement backing Budd also took aim at former Gov. Pat McCrory, another Senate contender, and derided him as a career politician. It’s a bit of a self-own, though, since Bishop introduces himself as having “served as a Mecklenburg County Commissioner during Pat McCrory’s second decade as a politician and later represented Charlotte in the NC House and NC Senate during Pat McCrory’s third decade as an elected official” and so forth.

The problem with this math is that Bishop is only a decade behind McCrory’s, so Budd’s accepting an endorsement from someone who, as Bishop himself would put it, is in the third decade of his political career—not exactly a fresh outsider’s face.

ATLANTA MAYOR — Mayor Keisha Lance Bottoms stunned the Atlanta political universe late on Thursday evening when she announced that she would not seek re-election this year. Not only had Bottoms given no indication that she was thinking about retiring, Joe Biden had in fact thrown a fundraiser for her in March, his first for any candidate since becoming president, and had even considered Bottoms the previous year as a possible running mate.

The mayor, though, said in a Friday morning press conference that she had considered retiring “for a very long time.” She added that, while there was no single reason behind her ultimate decision, she had dealt with a number of challenges in office including the city’s rising homicide rate, the coronavirus pandemic, and a 2018 cyberattack on city government. Her allies also told the Atlanta Journal-Constitution that Bottoms “genuinely believed she could have won a second term, but passed because she felt her motivation sapping.”

Bottoms was facing a competitive re-election fight in this November’s nonpartisan primary, though she insisted it didn’t play a role in her decision not to run. Among the more notable challengers, City Council President Felicia Moore had launched a campaign earlier this year, while attorney Sharon Gay set up a fundraising committee last month. The AJC also reports that City Councilman Antonio Brown “was on the verge of joining the fray” when the incumbent announced her departure.

An even bigger name, though, has been hovering over the contest. Former Mayor Kasim Reed recently said that running for his old job is “not something that’s a part of my plans,” which politicos correctly interpreted as Reed not ruling out the possibility. Instead, the AJC writes, “Some City Hall insiders say they believe the looming Reed revival certainly factored into” Bottoms’ departure.

Now that the mayoralty has unexpectedly come open, others may also decide to compete for the job in this very blue—and majority Black—city, including a few familiar names. Independent Mary Norwood had previously announced that she’d seek to return to the City Council this year, but an advisor told the paper the mayor’s retirement “changes everything.” Norwood lost to Bottoms 50.4-49.6 in 2017—eight years after Reed beat her by an identical margin—but she’s refused to accept the legitimacy of either defeat.

Atlanta’s candidate filing deadline isn’t until late August, so potential contenders have a bit of time to decide if they’ll compete in the Nov. 2 nonpartisan primary. If no one takes a majority of the vote this fall, a runoff would take place at the end of November.

Stacey Abrams (D) told CBS News that she hopes to be elected President of the United States one day.

Said Abrams: “Do I hold it as an ambition? Absolutely. And even more importantly, when someone asks me if that’s my ambition, I have a responsibility to say yes, for every young woman, every person of color, every young person of color, who sees me and decides what they’re capable of based on what I think I am capable of. Again, it’s about you cannot have those things you refuse to dream of.”

“When 10 Republicans voted to impeach President Donald Trump on Jan. 13, it marked a historic milestone: It was the most House members from a president’s party to vote to remove him from office,” the Washington Post reports.

“But since that vote, the 10 lawmakers have cut different paths in grappling with the fallout as they consider their political futures in a party still beholden to Trump.”

The Atlantic: “For some Americans, history isn’t the story of what actually happened; it’s the story they want to believe.”

WYOMING AT LARGE CD — Rep. Liz Cheney (R-WY) already has seven Republicans running for her seat, with several more expected to announce in the near future, WyoFile reports.

This is the best news Liz Cheney has had in weeks.

TEXAS GOVERNOR — Dallas Morning News: “Former Texas state Sen. Don Huffines (R) is running for governor, and from the broadsides he launched against two-term Gov. Greg Abbott’s (R) stewardship on Monday, it’s clear the Dallas businessman will try to attack the incumbent Republican from the right.”

SENATE MAP 2022 — David Byler: “It’s still early, and an electoral wave in one direction or the other could completely reshuffle the map. For now, only a handful of races look competitive. But we live in a volatile and changing political era.”

“Best bet: The most likely result is another thin and fragile majority for whichever party prevails in the 2022 Senate races. Which means a dwindling number of moderates will retain outsize influence in the upper chamber.”