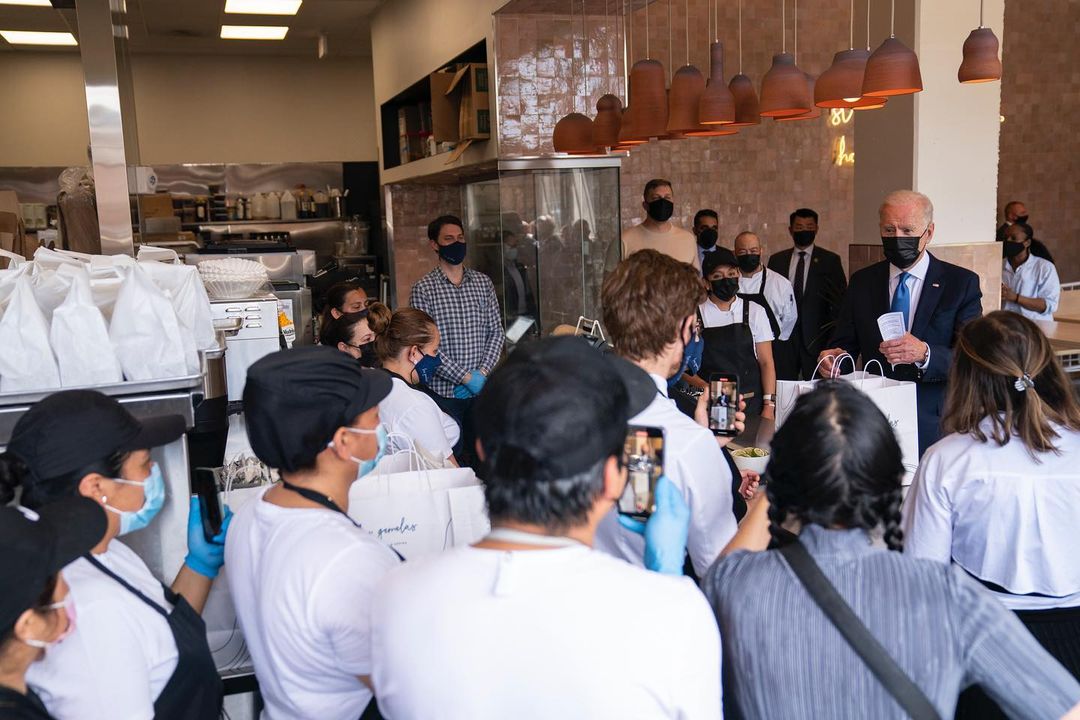 Washington Post: “When staff from the National Republican Congressional Committee rose to explain the party’s latest polling in core battleground districts, they left out a key finding about Trump’s weakness, declining to divulge the information even when directly questioned about Trump’s support by a member of Congress.”

WYOMING AT LARGE CD — With Liz Cheney on the verge of getting turfed out of her spot as the House GOP’s number-three leader for having the temerity to call out the Big Lie, the Trump brigades are renewing their push to oust her from Congress altogether. While multiple Republicans are already running against Cheney in next year’s primary, Politico’s Ally Mutnick reports the field could grow further still.

According to two unnamed operatives, Donald Trump’s “political team” (such as it is) is gunning to recruit Secretary of State Ed Buchanan and attorney Darin Smith, who ran for Wyoming’s lone congressional seat when it was last open in 2016 but finished a distant fourth, behind Cheney and two state lawmakers. Smith says he’s considering a bid while Buchanan, says Mutnick, is “leaning against” a campaign, adding that it’s unlikely the two would wind up running against one another.

In addition, Mutnick says that William Perry Pendley is also looking at the race; he was Trump’s acting director of the Bureau of Land Management for more than a year because Senate Democrats and some Republicans refused to confirm him. A federal judge later ruled that Pendley had served in the post illegally and ordered him to resign, which he refused to do.

With state Sen. Anthony Bouchard and state Rep. Chuck Gray already in the race, Cheney could get saved by the proverbial clown car if even more Republicans hop in and split the anti-incumbent vote. But the congresswoman’s enemies think they have a solution to this problem: As Smith put it, “I think anybody who’s a decent Republican is going to get behind whoever Donald Trump eventually endorses.” But while Trump’s endorsements remain potent, they haven’t always succeeded in clearing the field, so there’s no telling how a Donald ex machina move might play out this time.

OHIO 11TH CD — Candidate filing closed Wednesday for the special election to succeed Marcia Fudge, who resigned in March to become secretary of the Department of Housing and Urban Development, and a list of contenders is available here. This majority-Black constituency, which stretches from East Cleveland south to Akron, backed Joe Biden 80-19, and the winner of the Aug. 3 Democratic primary should have no trouble in the Nov. 2 general election.

The two Democratic candidates who have generated the most attention and money over the last few months are former state Sen. Nina Turner, who was a prominent Bernie Sanders surrogate for both of his presidential campaigns, and Cuyahoga County Councilwoman Shontel Brown, who also leads the county party. Turner ended March with a hefty $1.2 million war chest, though Brown’s $582,000 on-hand also gives her the resources to run a serious campaign.

Ruth Ben-Ghiat: “Often, people just want to believe the liar. Personality cults increase the leader’s credibility, since they present him as possessed of special powers or ruling with a divine mandate, making him seem infallible. Strongmen also know how to be persuasive, especially if they previously worked as journalists (Mussolini and the Congo’s Mobutu Sese Seko), in television (Italy’s Silvio Berlusconi and Trump) or were professional dissemblers (Putin was a KGB case officer). These practiced liars work hard to seem authentic.”

“Moreover, once people bond with the leader, they may be inclined to dismiss any evidence that conflicts with his claims, or overlook contradictions in his messages. They believe him because they believe in him. Or, in an interesting twist, they know he is lying, but they decide that they don’t care: better him than his enemy (who, as they have been taught to believe, lies even more). And some people actually approve of all the lying, seeing it as rule-breaking by a rogue they adore.”

“Key elements of the baseless claim that the 2020 election was stolen from President Donald Trump took shape in an airplane hangar here two years earlier, promoted by a Republican businessman who has sold everything from Tex-Mex food in London to a wellness technology that beams light into the human bloodstream…” the Washington Post reports.

“The enduring myth that the 2020 election was rigged was not one claim by one person. It was many claims stacked one atop the other, repeated by a phalanx of Trump allies. This is the previously unreported origin story of a core set of those claims, ideas that were advanced not by renowned experts or by insiders who had knowledge of flawed voting systems but by Ramsland and fellow conservative activists as they pushed a fledgling company, Allied Security Operations Group, into a quixotic attempt to find evidence of widespread fraud where none existed.”

“The White House, in deference to the sensitivity of the party divisions, is taking a hands-off approach to the primaries for now, even while watching them intently,” the Washington Post reports.

Said White House Deputy Chief of Staff Jen O’Malley Dillon: “Historically, President Biden has rarely endorsed in Democratic primaries. That’s also the practice that most presidents have had, and it’s a safe bet that will continue.”

TEXAS GOVERNOR — Austin American-Statesman: “On whether he plans to run for governor in 2022, O’Rourke said he will assess his next move when he finishes teaching his courses at the University of Texas and Texas State University.”

Said O’Rourke: “I’m going to think about where I can play the most positive role for Texas, whether that’s running for office or supporting those who do run for office. I’ll think of any and all ways that I can be helpful.”

VIRGINIA GOP PRIMARY CONVENTION — Washington Post: “Voters appeared to turn out in large numbers — by convention standards — although the party did not have a total available by Saturday evening.”

“A crew of about 60 will begin at 1 p.m. Sunday to tally the ballots by hand, a method three gubernatorial contenders demanded amid fears that vote-counting software the party was considering could be rigged against them. Determining a winner will be no simple matter. Convention rules require the nominee to secure a majority, not a mere plurality. [The ranked-choice] ballots will be tallied over and over, with the lowest vote-getter dropping off after each round.”

MASSACHUSETTS GOVERNOR — In a move that may surprise some ambitious Massachusetts Democrats, Sen. Elizabeth Warren told Politico that she’s going to run for reelection in 2024.

The Arizona state Senate has postponed a plan to interview some voters as part of a Republican-commissioned election recount after the Department of Justice raised concerns about voter intimidation, the Washington Post reports.

Rep. Adam Kinzinger (R-IL) compared the Republican Party to the Titanic amid an internal battle surrounding Rep. Liz Cheney (R-WY) and the push to oust her from her GOP leadership position, The Hill reports.

Said Kinzinger: “Right now, it’s basically the Titanic. We’re like, you know, in this in the middle of this slow sink, we have a band playing on the deck telling everybody it’s fine. And meanwhile, as I’ve said, you know, Donald Trump’s running around trying to find women’s clothing and get on the first lifeboat.”

“It just bothers me that you have to swear fealty to the Dear Leader or get kicked out of the party. It doesn’t make any sense.”— Maryland Gov. Larry Hogan (R), in an NBC News interview, on Republicans still making Donald Trump the face of the party.

“We had the worst four years we’ve had, ever, in the Republican Party.”  — Maryland Gov. Larry Hogan (R), in an interview with NBC News, noting Republicans lost control of the House, the Senate and the White House.

The Guardian: “She was blamed for her role in running the council and mayoral polls and the byelection in Hartlepool, but her allies said she was never given control over campaigns that were ‘run out of Starmer’s office.’ As the chair of the campaign, her supporters said she was being set up for the blame.”