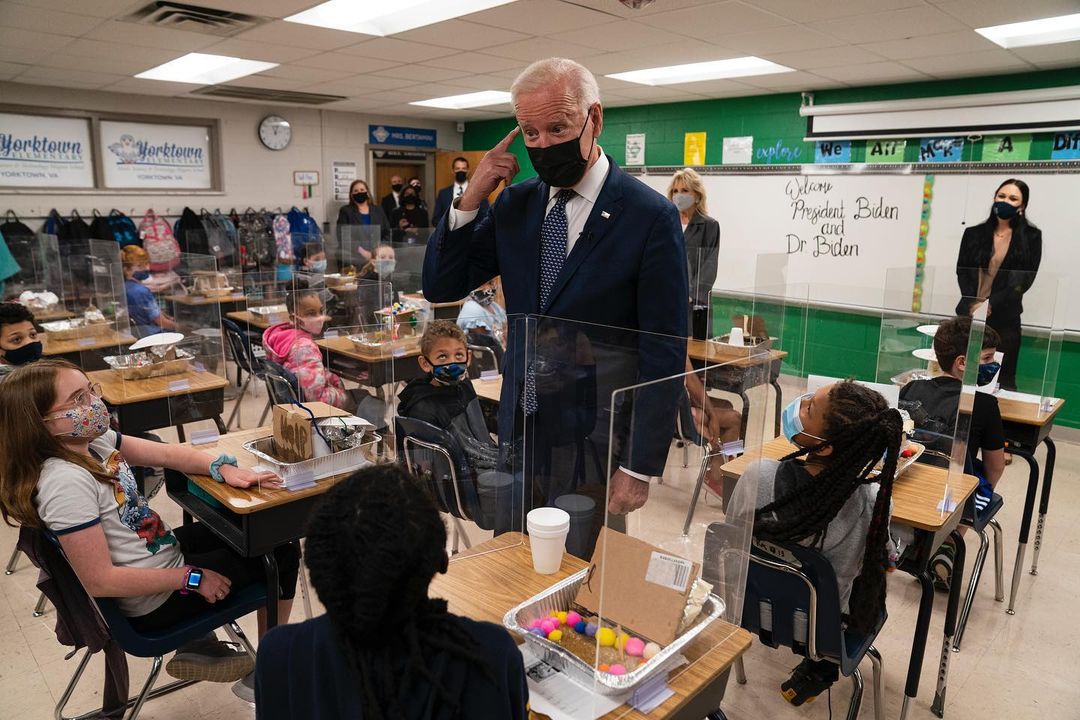 FWIW: “Overall, Democratic committees and their affiliated nonprofits and super PACs have spent over $2.1 million on Facebook and Google ads since the Georgia Senate runoff elections, while their Republican counterparts have only spent just over $650,000 on the platforms in that time.”

“This spending seems to have paid off for Democrats, with the DNC and DCCC having one of their most successful fundraising off-year first quarters ever.”

Washington Post: “Six months removed from his Election Day loss, Trump has emerged from his West Palm Beach hibernation — refashioning himself as the president of the Republican States of America and reshaping the party in ways both micro and macro.”

“Trump’s reappearance is fueled by an ego-driven desire to remain at the center of national attention, said former advisers and allies who are in touch with Trump.”

“The defeated ex-president is propelled primarily by a thirst for retribution, an insatiable quest for the spotlight and a desire to establish and maintain total dominance and control over the Republican base, said several former senior White House advisers. He has boasted to some in his orbit that he expects a book deal at some point, though there is no known offer.”

“The commission’s decision, made public Thursday, was the result of a deadlock between Republican and Democratic members during a meeting in February. Four of the six commissioners must agree to proceed with an action.”

MISSOURI U.S. SENATOR –Two unnamed Republican operatives tell Morning Consult that GOP Rep. Vicky Hartzler “is likely to declare her candidacy soon” for Missouri’s open Senate seat, though they didn’t offer a specific timetable, and the word “soon” means different things to different people (including, in our experience, “never”). Meanwhile, Democratic state Sen. Brian Williams says he’ll announce a decision “this summer after the legislative session ends.” That’s a big window, though, since the session wraps in just a week.

NEW HAMPSHIRE GOVERNOR — In a broader piece about Democratic retirements from the House due in part to concerns about redistricting, the New York Times suggests that sophomore Rep. Chris Pappas could run for governor if New Hampshire Republicans make his 1st Congressional District redder. There’s no word from Pappas himself, however.

NEW YORK GOVERNOR — Former Trump administration official Andrew Giuliani said on Monday that he’d make a decision about whether to run for governor “in the next eight to 10 days or so.”

MARYLAND GOVERNOR — Baltimore County Executive John Olszewski has decided to take a pass on seeking the Democratic nomination for governor next year and says that he will instead run for a second term in his current post.

FLORIDA GOVERNOR — Democratic state Rep. Anna Eskamani, who said shortly after Election Day that she was considering a run for governor, announced on Thursday that she’ll seek re-election instead.

NORTH CAROLINA U.S. SENATOR — EMILY’s List, which has a history of spending considerable sums to help some of its most prominent candidates, has endorsed former state Supreme Court Chief Justice Cheri Beasley in her quest for the Democratic nomination for Senate in North Carolina.

“More than a dozen onetime aides and advisers to former President Donald Trump have signed on to assist Republicans competing in statewide and federal contests across the country, in some cases setting up potential showdowns in the months to come as they work to cast their candidates as the most Trump-aligned figures in crowded races,” CNN reports.

“The payments, which haven’t been previously reported, came after two of the former campaign staffers sued Steyer’s campaign last year under a California law that allows workers to sue their employers over wage and labor violations.”

FLORIDA U.S. SENATOR — Former prosecutor Aramis Ayala says she’s considering seeking the Democratic nomination to take on Republican Sen. Marco Rubio next year. In 2016, she became the first Black person to serve as state attorney in Florida history when she won an election to serve the 9th Judicial Circuit, which includes the city of Orlando.

Ayala declined to run for re-election last year after a legal battle with then-Gov. Rick Scott, who reassigned dozens of potential capital cases to a neighboring prosecutor after Ayala said she wouldn’t seek the death penalty against any defendants. Florida’s Supreme Court ultimately ruled in Scott’s favor, which Ayala cited in her decision not to seek another term, saying the decision was “in direct conflict with my view and my vision for the administration of justice.”

TEXAS GOVERNOR / LT. GOVERNOR — Deep inside a long New York Times Magazine article on the burgeoning civil war within the Texas GOP, Elaina Plott reports that state Agriculture Commissioner Sid Miller—who hails from the party’s looniest wing—hasn’t “yet made a final decision” about whether to challenge Gov. Greg Abbott in next year’s primary. Miller didn’t offer any kind of timetable for making an announcement, but he sounds eager, claiming he’s received an “overwhelming” response at Republican events.

The Texas Tribune, meanwhile, reports that Miller “has also raised speculation that he could run against Lt. Gov. Dan Patrick.”

GEORGIA 6TH CD — Republican Eric Welsh, an Army veteran and former Coca-Cola executive, launched a bid against Democratic Rep. Lucy McBath on Tuesday. In his kickoff, Welsh derided McBath, whose son, Jordan, was murdered by a gunman in 2012, as a “single-issue partisan hack” and said, “But to go there to Washington and represent but what one view, and not strongly support the Second Amendment and our right to bear arms, is unfortunate.” The only other notable Republican in the race is another Army veteran, Harold Earls.