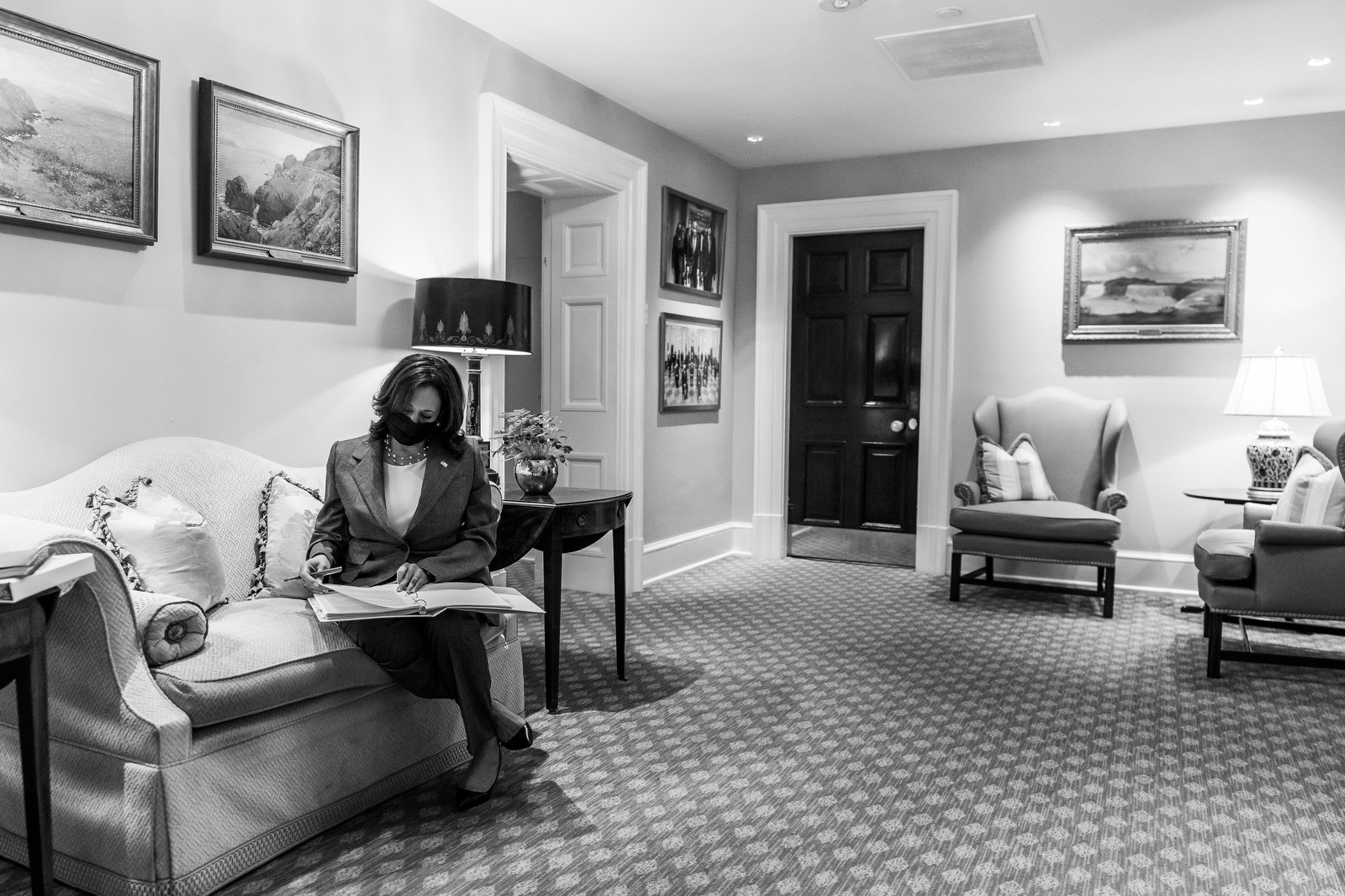 “Hiring was a huge letdown in April, with nonfarm payrolls increasing by a much less than expected 266,000 and the unemployment rate rose to 6.1% amid an escalating shortage of available workers,” CNBC reports.

Wall Street Journal: “The slowdown in hiring signaled a potential slowdown in economic momentum, at least temporarily, as some businesses struggled to find workers and faced supply-chain issues.”This news should increase the pressure on lawmakers to pass Biden’s infrastructure jobs bill.

FBI IS STILL HUNTING THE TRUMP TERRORISTS. “Four months after the Jan. 6 riot at the U.S. Capitol, FBI agents maintain a steady pace of arresting people accused of taking part, as one of the largest criminal investigations in American history keeps growing,” NBC News reports.

Said one law enforcement officer: “We’re not done rounding up the worst of the worst. We’re not slowing down.”

“More than 440 people have been charged with taking part in the Capitol siege, coming from all but six states — Mississippi, North and South Dakota, Rhode Island, Vermont and Wyoming. The largest number come from Texas, Pennsylvania, and Florida, in that order.”

RETURNING TO NORMAL AT 1600 PENN. Politico: “As the president this week set an ambitious goal to get 70 percent of Americans vaccinated by July Fourth and ‘return to normal,’ 1600 Pennsylvania Avenue is starting to open up. How much, however, remains unclear, in part because White House officials are reluctant to say.”

“Those officials insist they are moving cautiously and still working to balance medical guidance in the workplace and the realities of employees returning to work within cramped quarters. They’re also aware that every aspect of the Covid precautions they take — from mask-wearing to vaccinations — has been intensely scrutinized. That includes just how closely they’re adhering to their own medical guidance around how communities and workplaces should be reopening.”

Jonathan Bernstein: “Goals publicly stated by the president put the government on notice; that helps activate the bureaucracy and pressure civil servants to achieve what the president wants.”

“In theory, everyone who works in the U.S. government wants to defeat the pandemic. But in practice, bureaucrats are wary about trying new things, worried about others encroaching on their jurisdiction, and prone to ignoring the president when they can get away with it. Public pressure makes all of that harder, and therefore should make maximizing vaccinations more likely.”

STEFANIK v. CHENEY. CNN: “In 2015, 2016 and the early days of Trump’s first term in office, Stefanik criticized Trump over everything from his incendiary comments about Muslims and women to his signature policy positions, such as reforming NATO, building a U.S.-Mexico border wall and having stronger cooperation with Russia.”

Susan Glasser: “The striking difference is that, this time, Liz Cheney has chosen to fight him on it. If Trump does manage to reinvent ‘the Big Lie’ in service of his own corrupt ends, Cheney will at least have forced members of her party into admitting, on the record, that they are making a choice between truth and Trump’s untruth—and choosing the latter.”

“There is no hope among her supporters and advisers that she will win the fight, when the House Republican Conference votes, likely next week, to boot her. Instead, there is a recognition that Cheney has finally decided to do what most of the Trump skeptics within the Party were reluctant to for four years: publicly challenge not only Trump’s lies but the enablers within the G.O.P. who give his lies such power.”

Axios: “Republican officials are rendering an unequivocal verdict: They want to cement former President Trump’s politics and policies into the foundation of the GOP for many years to come.”

Susan Glasser: “Eric Edelman revealed that Cheney herself secretly orchestrated an unprecedented op-ed in the Washington Post by all ten living former Defense Secretaries, including her father, warning against Trump’s efforts to politicize the military. The congresswoman not only recruited her father but personally asked others, including Trump’s first Defense Secretary, Jim Mattis, to participate.”

TAKING UNDESERVED CREDIT. Associated Press: “Every Republican in Congress voted against the sweeping pandemic relief bill that President Joe Biden signed into law three months ago. But since the early spring votes, Republicans from New York and Indiana to Texas and Washington state have promoted elements of the legislation they fought to defeat.”

MCCARTHY FEARS. House Minority Leader Kevin McCarthy is concerned about being called as a witness by a commission looking into the events of January 6th, CNN reports.

Insider on Trump Aides planning to abandon McCarthy at any moment: “They are pointing out how House Minority Leader Kevin McCarthy (R-CA) fell short when he first tried to win the job in 2015 before withdrawing… And they routinely note Trump doesn’t like to associate himself with losers.”

“One former House GOP leadership aide said McCarthy enjoys front-runner status to succeed Democratic House Speaker Nancy Pelosi should Republicans win the majority. But this person added that any flash of weakness from McCarthy between now and 2022 could prompt frenemies to pounce.”

“Similarly large increases in willingness to take vaccines emerged for those who were asked about getting a vaccine if doing so meant they wouldn’t need to wear a mask or social-distance in public, compared with a group that was told it would still have to do those things.”

During a press conference outlining his plan to end most COVID-19 restrictions, Minnesota Gov. Tim Walz (D) spoke out about the politicization around masks, saying “it cost lives,” WCCO reports.   Said Walz: “I just want to note on this. The politicization around masks, I think history is going to write as one of the worst things that’s happened to this country. I think it cost lives. I think it’s stupid. It’s the least intrusive thing we can do.”

FASCIST AUTHORITARIANS ARE NOW IGNORED. Washington Post: “They are among a host of strongmen and nationalists who cozied up to Trump, benefiting from his ‘America First’ foreign policy at the expense of traditional U.S. allies, only to see their fortunes fall with the Oval Office under new management.”

“The cold shoulder is part of a strategy in keeping with Biden’s promise as a candidate that he would not coddle dictators or mistreat U.S. allies. More than three months into his term, leaders on both sides of that divide are still adjusting.”

MCCONNELL v. VOTING PROTECTION. McClatchy: “McConnell has conveyed his vehement opposition to the bill repeatedly in public. What’s different, conservatives say, is his personal level of commitment behind-the-scenes to educate activists on just how damaging the legislation would be to the future electoral prospects of Republicans. To those involved, they’ve noticed a level of engagement from the GOP leader they haven’t seen before.”

“Some progressives have warned that McConnell is taking the legislation more seriously than even Democrats are. And the fight is expected to intensify next week, when the Senate Rules & Administration Committee is scheduled to begin marking up the legislation.”

FACEBOOK PUNTING.  Kara Swisher: “In general, I have considered the case of Mr. Trump to be much less complex than people seem to think. And it has been made to appear highly complicated by big tech companies like Facebook because they want to exhaust us all in a noisy and intractable debate.”

“Mr. Trump should be seen as an outlier — a lone, longtime rule breaker who was coddled and protected on social media platforms until he wandered into seditious territory. He’s an unrepentant gamer of Facebook’s badly enforced rules who will never change. He got away with it for years and spread myriad self-serving lies far and wide…”

“In moving the key decision over Mr. Trump out of its own hands (where it belonged), the company has passed along the hottest of potatoes and said good riddance to responsibility. Facebook is pretending that its hands are tied, even though Facebook executives were the ones who tied them.”

BIDEN v. EUROPE. Politico: “On everything from trade and taxes to coronavirus vaccines, U.S. President Joe Biden is transpiring to be every inch as much of a pain in Brussels’ bureaucratic backside as his predecessor — hitting the EU exactly where it hurts, while robbing it of the moral high ground it loves to occupy. Biden’s bombshell proposal to waive intellectual property rights on coronavirus vaccines is a perfect case in point.”

“America’s vaccine gambit is not a one-off. In only a few months, Biden has exposed both the folly in the EU’s trade policy toward China and Europe’s lack of ambition in plans to tax digital multinationals… A hundred days into the new administration, the Europeans are starting to sense that they are being offered pretty tough love from their ally.”

PSAKI EXIT (EVENTUALLY). White House Press Secretary Jen Psaki told David Axelrod that she’s not likely to stay in her job for the duration of President Biden’s term.  Said Psaki: “I think it’s going to be time for somebody else to have this job, in a year from now or about a year from now.”

SOUTH CAROLINA FIRING SQUADS.  “The South Carolina House voted Wednesday to add a firing squad to the state’s execution methods amid a lack of lethal-injection drugs — a measure meant to jump-start executions in a state that once had one of the busiest death chambers in the nation,” the AP reports.

CHAUVIN AND ASSOCIATES FACE MORE FEDERAL CHARGES.  “A federal grand jury has indicted the four former Minneapolis police officers involved in George Floyd’s arrest and death, accusing them of violating the Black man’s constitutional rights as he was restrained face-down on the pavement and gasping for air,” the AP reports.

NO LIMIT OPEN CARRY IN TEXAS.  “The Republican-led effort to allow Texans to carry handguns without any kind of license cleared what is likely its biggest remaining hurdle in the Capitol on Wednesday, when the Texas Senate moved in a nail-biter vote to bring the measure to the floor and then passed it,” the Texas Tribune reports.

“The measure – already passed by the Texas House – heads to a conference committee for the two chambers to hash out their differences, unless the House accepts the Senate amendments. Then, the bill heads to Gov. Greg Abbott, who said last week he would sign the permitless carry bill into law.”

TENNESSEE BANS CRITICAL RACE THEORY.  “The Tennessee General Assembly has banned the teaching of critical race theory, passing a law at the very end of the legislative session to withhold funding from public schools that teach about white privilege,” the Tennessean reports.

“Republicans in the House made the legislation a last-minute priority, introducing provisions that ban schools from instructing students that one race bears responsibility for the past actions against another, that the United States is fundamentally racist or that a person is inherently privileged or oppressive due to their race.”

Similar bills are being considered in other red-state legislatures across the country.