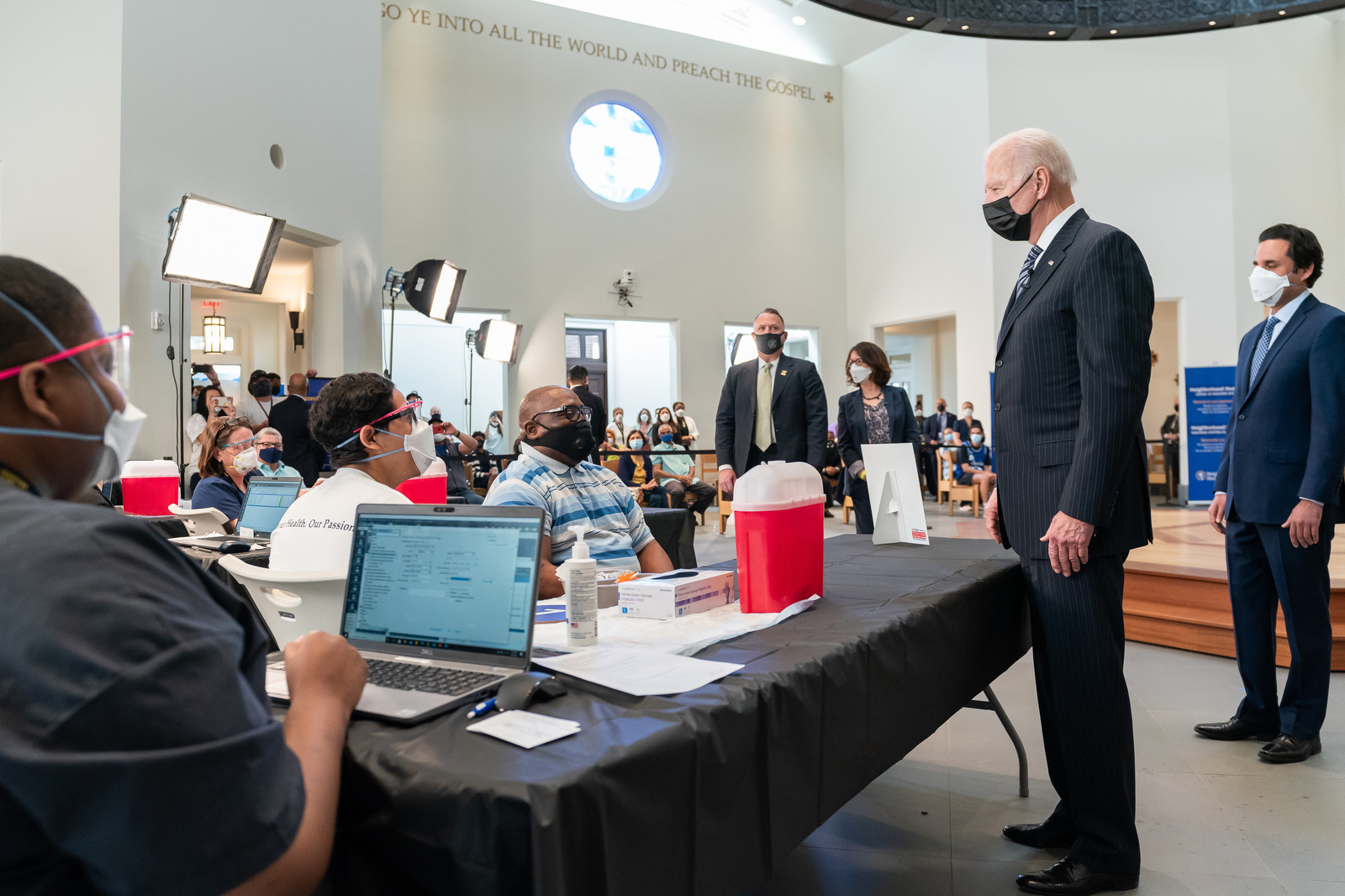 A Public Policy Polling survey finds state Sen. Amanda Chase (R) leads among primary voters (when asked who they would like their delegates to support) with 23% and Glenn Youngkin (R) at 21% and 30% undecided.

A Change Research poll finds that Chase leads among primary voters (when asked who they would like their delegates to support) with 29% and Youngkin with 25%.

A Trafalgar Group poll on behalf of the Youngkin campaign of likely delegates has him leading with 38% and Pete Snyder (R) at 26%.

Don’t give much weight to this polling as the “race” is actually a convention with 53,000 delegates.

Wall Street Journal: “Republican officials and activists in Virginia will gather Saturday to choose their gubernatorial nominee, the party’s first major effort during President Biden’s tenure to win back voters in a state where Democrats made significant gains during Donald Trump’s presidency.”

“Virginia Republicans are picking their nominee at a convention via a ranked-choice voting system, with delegates gathering to make their choices at dozens of locations around the state. Results aren’t expected to be tallied and made public until next week.”

“Former Virginia GOP officials — including those from the state’s northern parts, where proximity to Washington, D.C., and growth have helped accelerate widespread Democratic victories — say Republicans risk a Democratic win if they nominate a candidate too closely aligned with Mr. Trump.”

New York Times: “One candidate brands himself a ‘conservative outlaw.’ Another boasts of her bipartisan censure by the State Senate for calling the Capitol rioters ‘patriots.’ A third, asked about Dominion voting machines — the subject of egregious conspiracy theories on the right — called them ‘the most important issue’ of the campaign.”

“These are not fringe candidates for the Republican nomination for Virginia governor.”

“They are three of the leading contenders in a race that in many ways embodies the decade-long meltdown of Republican power in Virginia, a once-purple state that has gyrated more decisively toward Democrats than perhaps any in the country.”

Geoffrey Skelley: “President Biden took office more than three months ago, but Republicans are not any closer to accepting his victory now than they were then.”

“And this lack of movement is really the story.”

Charlie Warzel: “The Trump website is essentially a GoFundMe page for the twice-impeached leader of the Republican Party. The one link that does work is the one that says ‘CONTRIBUTE’ and leads to a nice page where you can give the man your money.”

“There’s also a nice Facebook Pixel tracker on the site that will collect some nice data that can be used to target custom audiences on the platform. Trump’s account is, obviously, banned at the moment, but maybe Trump-adjacent accounts could use this. Or perhaps Trumpworld might sell that dataset to a third party for advertising purposes. Maybe it might be useful later on for a potential campaign.”

UK COUNCIL AND BY-ELECTIONS. “Labour is losing ground to the Conservatives in elections across England, in the first big test of Sir Keir Starmer’s leadership of the party,” the BBC reports.

The Telegraph: “The by-election results – announced in the early hours of Friday – are further evidence of Labour’s estrangement from its traditional heartlands, the ‘Red Wall’ seats that would have been unthinkable candidates for turning blue just a decade ago.”

The Guardian reports Starmer “conceded his party had lost the trust of working people across England” and called the local election results “bitterly disappointing.”

FLORIDA 13TH CD — Former Defense Department official Eric Lynn kicked off a campaign for Florida’s 13th Congressional District on Wednesday, a day after Democratic Rep. Charlie Crist announced a bid for governor. Lynn ran for this seat in 2016 and raised large sums but eventually deferred to Crist, who went on to defeat Republican Rep. David Jolly.

Speaking of Jolly, he’s been talking about running for governor as an independent, but the Tampa Bay Times Steve Contorno says the former congressman “may run” for his old seat. Jolly has not yet said anything about the possibility himself, though, including what party banner—if any—he might run under.

NEBRASKA GOVERNOR — Politico reports that agribusinessman Charles Herbster’s recent entry into the primary was truly unwelcome news for the fellow Republican he’s hoping to succeed, termed-out incumbent Pete Ricketts, and the governor is “determined to keep Herbster out of power.”

So far, Ricketts’ most public act of aggression came at a press conference last week where he accused the candidate of moving his company’s headquarters out of Nebraska―an allegation he made the very day that Herbster was kicking off his own campaign. There could be a whole lot more ahead, though, as the extremely wealthy Ricketts has the resources to truly savage Herbster, who also will likely have access to plenty of money himself.

Politico also takes a deep look at the source of this “bad blood” between Ricketts and Herbster, which appears to go back to the 2014 primary. Herbster himself briefly ran in that contest before dropping out and donating an eye-popping $860,000 to a fellow candidate, state Sen. Beau McCoy. McCoy in turn went on to target Ricketts for co-owning what he characterized as the “gay-friendly” Chicago Cubs baseball team, an attack Politico describes as “deeply personal” considering that Ricketts’ sister is gay.

Ricketts won that primary while McCoy placed third, but that was hardly the end of his feud with Herbster. Indeed, Republicans believe that one of the reasons Ricketts wants to stop Herbster now is that the two could end up running against one another for president. There’s a whole lot going on here, and we recommend reading the whole Politico piece.

The only other candidate currently in the GOP primary is another wealthy contender, University of Nebraska Regent Jim Pillen, and Ricketts seems to like him a lot more. While the governor has said he’ll wait for the field to take shape before endorsing anyone, Isenstadt points out that his longtime political advisor is working for Pillen’s campaign.

MICHIGAN GOVERNOR — Former Republican Rep. Pete Hoekstra’s name isn’t one we expected to pop up as a potential candidate for governor, and perhaps he feels the same way: When asked by WLNS’ Tim Skubick whether he might run, Donald Trump’s former ambassador to the Netherlands said he would “have to talk to his wife.” Hoekstra, who represented western Michigan’s conservative (and heavily Dutch) 2nd District for nearly two decades, sought the governorship once before in 2010 but lost the GOP nomination 36-27 to Rick Snyder, who went on to win that fall.

Two years later, Hoekstra’s political career came to a screeching halt during his failed challenge to Democratic Sen. Debbie Stabenow. In that race, he deployed a flagrantly racist ad during the Super Bowl starring a woman of Asian descent speaking in broken English, featuring bon mots like, “Debbie spend so much American money. You borrow more and more, from us” and “Your economy get very weak. Ours get very good. We take your jobs. Thank you, Debbie Spend-it-now.” Backlash to the spot torpedoed Hoekstra’s campaign, which he went on to lose by a punishing 59-38 margin.

That brand of overt racism, though, was very much in vogue among Republicans just a few years later, so it wasn’t a surprise in 2017 when Trump tapped him to serve as ambassador to the Netherlands, where Hoekstra was born before emigrating to the U.S. as a child. Hoekstra’s overseas tenure ended with Joe Biden’s ascension to the White House, but given his past performance in statewide races, the Michigan GOP might not be so eager to welcome him back.

In the same piece, Skubick also mentions a couple of other Republican possibilities we hadn’t yet encountered: veteran Rep. Fred Upton and state Rep. Julie Calley, who is married to former Lt. Gov. Brian Calley, himself an unsuccessful candidate in the 2018 GOP primary for governor. As Skubick notes, though, Michigan Republicans have yet to land a single big-name candidate to take on Democratic Gov. Gretchen Whitmer.

MARYLAND GOVERNOR — Maryland Matters reports that former DNC chair Tom Perez, who’s been considering a bid for governor, has created what’s known as a “527” organization, though his exact plans for it are unclear. The term takes its name from a provision of the Internal Revenue Code that in fact governs nearly all political committees, including campaign committees and super PACs.

Groups that are labeled simply as 527s, however, are prohibited from “express advocacy” on behalf of specific candidates or parties and typically engage in issue advocacy instead. That’s a giant loophole, though—for instance, the notorious Swift Boat Veterans for Truth, which played a key role in sinking John Kerry’s campaign for president in 2004, was a 527—so Perez can probably find ways to use the vehicle to promote himself.

Meanwhile, Maryland Matters says that another Maryland Democrat looking at the race, former state Attorney General Doug Gansler, “is expected to announce his plans later this spring” and has hired a campaign manager.

CALIFORNIA GOVERNOR — SurveyUSA’s new poll for KABC-TV Los Angeles finds respondents saying they would vote against recalling Democratic Gov. Gavin Newsom by a 47-36 margin. SurveyUSA also inquired which candidate voters would choose as Newsom’s replacement, but none of his would-be successors have yet to register much support. A plurality of 38% said they wouldn’t back anyone, while another 26% were undecided; 2018 Republican nominee John Cox led the named options with just 9% of the vote.

Cox is hoping to boost his appeal, though, with a $5 million ad buy that features him accompanied by a 1,000 pound brown bear. It remains to be seen if this spot will actually move voters, but it’s almost certainly allowed Cox to get more publicity that he received for any of his three campaigns for office in Illinois, for president in 2008, or during his last campaign against Newsom. It still may not be quite as much attention as he wants, though: Cox griped on Wednesday that “[t]he coverage yesterday was all about the bear” rather than about the governor’s policies.

PENNSYLVANIA U.S. SENATOR — Republican Rep. Guy Reschenthaler has reportedly been considering a bid for Pennsylvania’s open Senate seat, but he sounds more than ready to defer to Army veteran Sean Parnell if he runs. In new remarks, Reschenthaler called Parnell “our best candidate” and continued, “He ran an incredible House campaign even though he didn’t prevail,” referring to his unsuccessful challenge to Democratic Rep. Conor Lamb last year. “He’s got a lot of respect with the base of the party and he has the ability to fundraise nationally,” said Reschenthaler. “No one will outwork him.”

Referencing his line of business, Lamon says, “I’ve spent my career bringing power to the people,” then decries “another kind of power” that “political elites” use to “divide, distract, and sell out our children’s future. (This riff features photos of Nancy Pelosi, Chuck Schumer, and Kelly, as well as news footage of someone smashing a glass door following the murder of George Floyd.) He finishes, “We have the power to take their power away.” In total, he uses the word “power” half a dozen times in 30 seconds.

One Goroff ally trying to coax her in, though: 314 Action, which supports electing scientists to Congress, released a survey this week from Democratic pollster Public Policy Polling showing Goroff leading Fleming 37-22 in a hypothetical primary. However, Goroff’s name recognition is considerably higher, and 40% of voters are undecided.