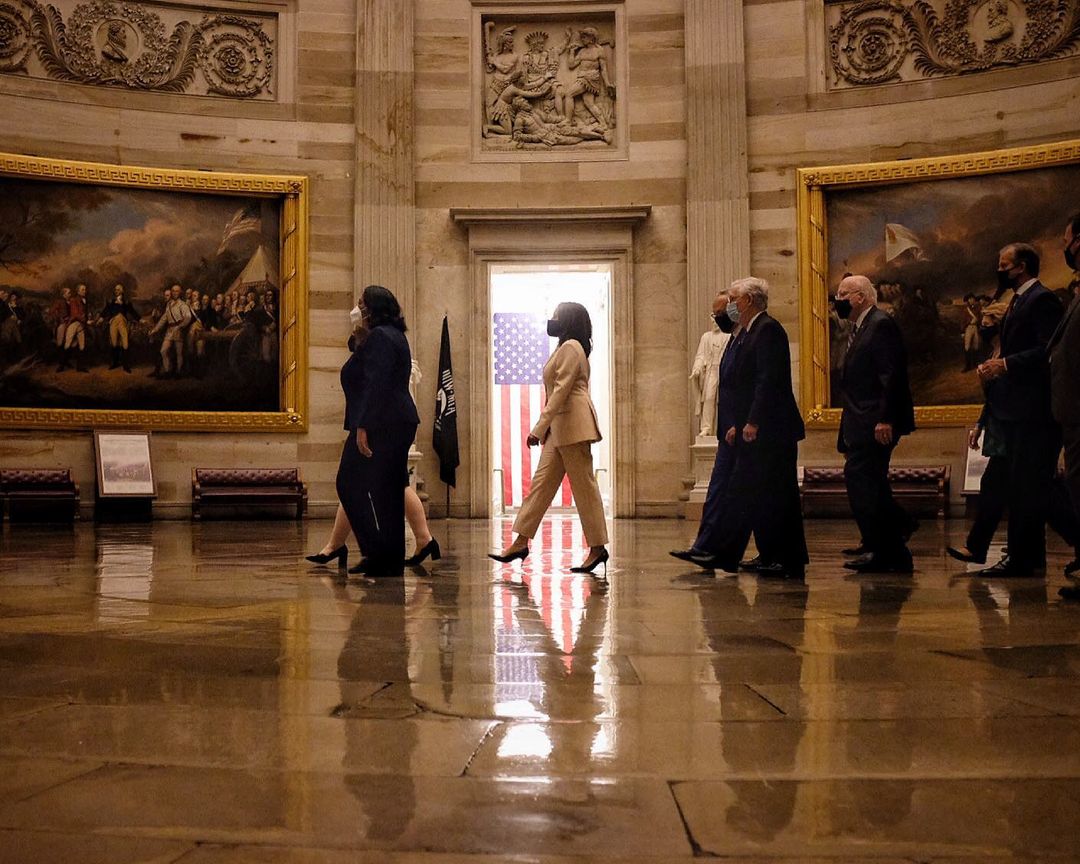 “President Biden will announce Tuesday a new goal to get 160 million Americans fully vaccinated and at least one shot administered to 70% of individuals by the Fourth of July holiday,” Axios reports.

Washington Post: “Health officials are confident that communities that can achieve a 70 percent vaccination rate will see sharp declines in individual cases, hospitalizations and deaths.”

“The White House on Tuesday told states vaccine supply they leave unordered will become available to other states — the most significant shift in domestic vaccine distribution since President Biden took office, and part of an effort to account for flagging demand in parts of the country,” the Washington Post reports.

The message Cheney Republicans object to is that Donald Trump lost the election fairly and then tried to overturn it.

Jonathan Chait: “In the few days after January 6, it appeared the Republican establishment that had tolerated four years of naked corruption and frequently undisguised racism had finally lost its patience with Donald Trump. A Mike Pence adviser said the vice-president was ‘done with Trump’s bullshit.’ Kevin McCarthy, whom Trump customarily addressed as ‘My Kevin’ as though he were his manservant, had a private screaming match. Several candidate members publicly resigned, and Murdoch-owned media outlets called for his resignation.”

“By the end of January, all the momentum to purge Trump had dissipated. Instead the party settled on a fragile internal peace, with Republicans who favored violent insurrection to hand Trump an unelected second term working alongside those who didn’t. That armistice is now ending. The momentum has now completely reversed, and the Republican party is in the process of liquidating all internal dissent against Trump’s authoritarianism.”

House Republicans are moving closer to ousting Conference Chair Liz Cheney (R-WY) from leadership, and are already considering replacements — including Reps. Elise Stefanik (R-NY), Ann Wagner (R-MO) and Jackie Walorski (R-IN), congressional aides tell Axios. “The conference meets next Wednesday, May 12. Most members expect the process to oust Cheney to begin then, whether formally or informally, after some of McCarthy’s top lieutenants broadened their complaints against her.”

“It would take up to a two-thirds vote of the 212 caucus members to replace her — a relatively high bar if a secret ballot is held.”

House Minority Leader Kevin McCarthy (R-CA) was caught on a hot mic before a Fox & Friends interview saying he’s “lost confidence” in Rep. Liz Cheney (R-WY), Axios reports. Said McCarthy: “I think she’s got real problems. I’ve had it with… I’ve had it with her. You know, I’ve lost confidence… Well, someone just has to bring a motion, but I assume that will probably take place.”

The Times of London profiles White House chief of staff Ron Klain. “Everybody who is anybody in Washington knows Klain, although few people outside the Beltway — the ring road surrounding the capital — have heard of him. He is a powerful, confident operator who knows the business of government inside out. Trusted to exercise power and take decisions, he keeps his boss informed while lifting the burden of office from him.”

“A U.S. bankruptcy administrator asked a federal judge Monday to dismiss the National Rifle Association’s efforts to declare bankruptcy or appoint a trustee or examiner to oversee the gun rights organization — a setback for the group at the close of a federal court hearing to consider its petition,” the Washington Post reports.

“The recommendation bolstered the arguments of New York Attorney General Letitia James (D), whose office has fought the NRA’s attempts to relocate from New York to Texas, and came after senior NRA executives acknowledged in court testimony that they received lavish perks.”

Playbook: “For the second consecutive show, Tucker Carlson went after Kevin McCarthy on Monday night. The Fox News host hit the GOP House leader over his close relationship with Frank Luntz, a longtime GOP pollster and consultant who’s worked for numerous corporate clients, and said in mid-February there ‘isn’t a shred of hope’ for Donald Trump to re-enter politics after Jan. 6.”

“Carlson reported that McCarthy rents space in Luntz’s Penn Quarter penthouse, questioning whether that arrangement is allowed. McCarthy’s staff confirmed their roommate status in a statement to the network, though wouldn’t say how much he pays in rent. That’s beside the point, Carlson argued: ‘Now you know why they listen to Frank Luntz but they don’t listen to you!’”

“Adding to the intrigue: Carlson noted that Luntz and McCarthy’s ‘Odd Couple’ arrangement was not something he just stumbled upon on his own but was leaked to Fox by a knowledgeable unnamed source. Hmm.”

“House Minority Leader Kevin McCarthy (R-CA) confirmed on Tuesday he rented a room from GOP pollster Frank Luntz during the coronavirus pandemic, news that was first reported by Fox News host Tucker Carlson the night before,” The Hill reports.

Said McCarthy: “I didn’t know how this was controversial. Frank has been a friend of mine for more than 30 years. I met him with Newt Gingrich back when they were working on the Contract with America.”

The Daily Mail has more details, but it’s worth watching Tucker Carlson’s piece too.

“The strategy is part of a backup plan Mr. Schumer has lined up in the event that talks among 15 senators in both parties fail to yield a compromise. As the negotiations drag on with little agreement in sight, proponents are growing increasingly worried that Democrats may squander a rare opportunity to legalize broad swaths of the undocumented population while their party controls both chambers of Congress and the White House.”

Sen. Josh Hawley (R-MO), who led efforts to challenge the 2020 election results in Congress, on defended his fist pump to protesters outside of the Capitol on Jan. 6, The Hill reports.

Said Hawley: “Some of them were calling, so I gestured toward them. They had every right to be there… When I walked by that particular group of folks were standing there peacefully behind police barricades.”

He later called it a “slur” to lump in demonstrators outside of the Capitol with rioters who breached the building later.

The Atlantic: “The spring of 2021 is different from the spring of 2020… Scientists know a lot more about how COVID-19 spreads—and how it doesn’t. Public-health advice is shifting. But some progressives have not updated their behavior based on the new information. And in their eagerness to protect themselves and others, they may be underestimating other costs.”

“Being extra careful about COVID-19 is (mostly) harmless when it’s limited to wiping down your groceries with Lysol wipes and wearing a mask in places where you’re unlikely to spread the coronavirus, such as on a hiking trail. But vigilance can have unintended consequences when it imposes on other people’s lives. Even as scientific knowledge of COVID-19 has increased, some progressives have continued to embrace policies and behaviors that aren’t supported by evidence, such as banning access to playgrounds, closing beaches, and refusing to reopen schools for in-person learning.”

David Leonhardt: “All of this rhetoric has obscured a basic fact about Biden’s tax plan: It would not actually raise tax rates on the rich to high levels, historically speaking.”

“If all of Biden’s proposed tax increases passed — on the corporate tax, as well as on investment taxes and income taxes for top earners — the total federal tax rate on the wealthy would remain significantly lower than it was in the 1940s, ’50s and ’60s. It would also remain somewhat lower than during the mid-1990s.”

Wall Street Journal: “Economists have long puzzled over the question of who pays the corporate tax… One obvious thought is that companies raise prices after tax increases, putting the burden on consumers. Most economists say there is little effect.”

“Most analysts divide the corporate tax burden between capital and labor … Official estimates from the nonpartisan congressional Joint Committee on Taxation lean toward the Democratic view, assigning 75% of the long-run burden to owners of capital and 25% to workers.”

The New Yorker profiles Nicola Sturgeon, the First Minister of Scotland and the leader of the Scottish National Party, ahead of the UK’s “Super Thursday” elections.

She “has skillfully shifted the debate over Scottish independence away from history and constitutional arcana and toward the more pressing question of which kind of society voters would prefer to live in: Boris Johnson’s Brexit Britain or Nicola Sturgeon’s social-democratic Scotland.”

Dan Pfeiffer: “The fight over the filibuster is coming; the only question is when and how. If the filibuster is going down — which is a very open question at this point — it is only going to happen over an issue with immediate urgency that fires up Democratic activists but also has bipartisan support, a long record of Republican obstruction, and will be something Joe Manchin supports (ugh). I wish voting rights were that issue, but clearly, it isn’t.”

“Here’s why I think a fight over gun safety legislation is our best – and maybe last – shot to take down the filibuster and save democracy.”

The Hill: “It’s a strange time for the relationship between Republicans and big business.”

“Important figures in a party that usually toes the pro-business line are instead throwing jabs at the corporate world. The critics include several potential 2024 presidential contenders.”

Said Sen. Ted Cruz (R-TX): “If you look at the CEOs of the Fortune 100, there are very, very few who you could even plausibly characterize as right of center. They are almost uniformly Democrat. And they have made the decision to enlist their companies in the political agenda of today’s Democratic Party, which is controlled right now by the radical left.”

“In a potentially significant shift in the debate over combating sexual assault in the military, the nation’s top general says he is dropping his opposition to a proposal to take decisions on sexual assault prosecution out of the hands of commanders,” the AP reports.

“Gen. Mark Milley, chairman of the Joint Chiefs of Staff, stopped short of endorsing the changes recommended by an independent review panel. But in an interview, Milley said he is now open to considering them because the problem of sexual assault in the military has persisted despite other efforts to solve it.”

“Marine Le Pen set the stage for a bruising presidential election campaign by accusing Emmanuel Macron of driving France towards chaos, violence and economic decline,” the Times of London reports.

“The leader of the far-right National Rally attacked Macron in an online speech after her annual wreath-laying at Joan of Arc’s statue in Paris on May Day. With opinion polls putting Le Pen in striking distance of Macron in next year’s election, she portrayed herself as a president in waiting.”

Said Le Pen: “I want to restore the national unity and the civil peace which are so cruelly lacking.”

“A briefing on suspected energy attacks on US intelligence officers turned contentious last week, as senators demanded more information about the mysterious incidents from the CIA and accountability for how the agency has handled them,” CNN reports.

“Senators on the Intelligence Committee were baffled that they were just learning about significant developments for the first-time and they were also frustrated that they were not given more details. The classified briefing was one of the most contentious in the committee’s recent memory.”