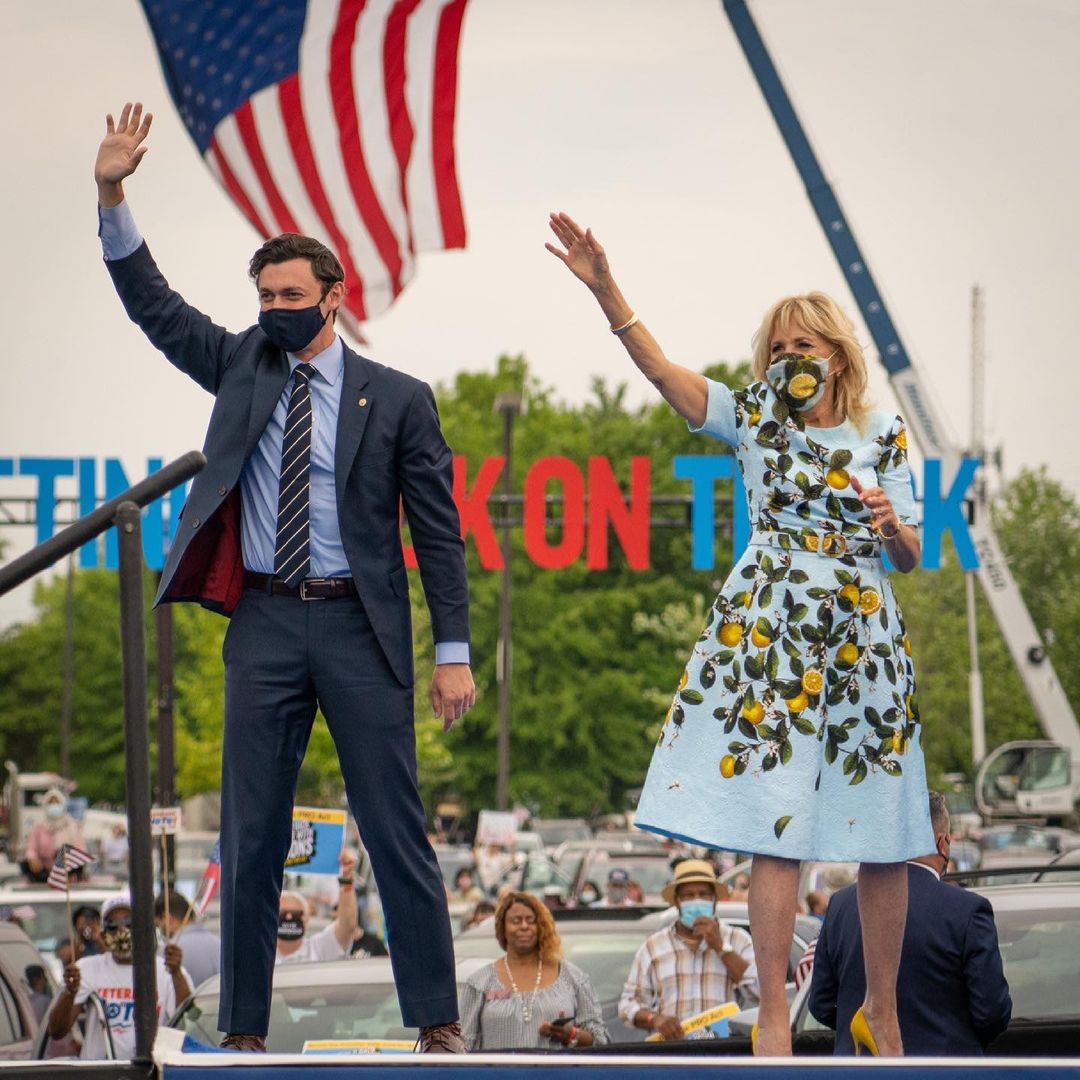 “The National Republican Congressional Committee is adding 10 House Democrats to its target list for the 2022 midterm elections, as the party seeks to reclaim the majority in the chamber,” Roll Call reports.

“All 10 of the incumbent Democrats represent states, such as California and New York, that are set to lose a House seat thanks to the 2020 census, which will shift the balance of congressional seats for the next decade.”

Seth Masket: “Schwarzenegger had a party behind him, one that was capable of collective action. No, there was no official way to designate a Republican nominee in the recall, but Schwarzenegger functionally became that anyway. A vast ideological range of Republican officeholders and activists, even those who strongly disagreed with his stances on some social and environmental issues, enthusiastically backed him, seeing him as the best shot the party would have in seizing the governor’s office for a generation.”

“Through both subtle and crass means, they pressured other Republican candidates out of the contest, making sure that the Republican vote would not be split. This is how Schwarzenegger ended up with 49 percent of the vote in a field of 135 candidates.”

Mark Barabak: Good news for Gavin Newsom – California is no longer the place it was in 2003.

GEORGIA — “Georgia election officials plan to start canceling voter registrations as soon as this week, on a smaller scale than in past years and, for the first time, exchanging information with other states to identify invalid voters,” the Atlanta Journal Constitution reports.

Enter your address and the New York Times will show you the political diversity of your neighborhood.

Monkey Cage: “We found that, after 2011, 45 state legislative maps had been drawn with extreme partisan gerrymandering. Of these, 43 favor Republicans, while only two help Democrats.”

“With some effort, GOP-run state legislatures could draw state legislative districts so they’re tilted still more in the Republicans’ favor.”

ARIZONA U.S. SENATOR — Republicans got their first noteworthy contender on Monday when Jim Lamon, the chair of the solar energy and construction company Depcom Power, announced that he would take on Democratic Sen. Mark Kelly. Lamon does not appear to have run for office before, though local NBC reporter Brahm Resnik said last month that Lamon founded a conservative voter registration group in the state and has spoken before a number of Republican organizations in Arizona.

CALIFORNIA U.S. SENATOR — The Los Angeles Times interviewed Democratic Rep. Ro Khanna over the weekend about his interest in waging an intra-party challenge to appointed Sen. Alex Padilla, writing that Khanna “left the impression it is unlikely.” The congressman said, “I’m happy where I am. I mean, I haven’t ruled anything out in my future, but I am chairing the environmental subcommittee [on the House Oversight Committee] and doing good work.”

MINNESOTA GOVERNOR — Republican state Sen. Michelle Benson tells Axios that she’s considering taking on Democratic Gov. Tim Walz and will decide after the state budget is complete. Benson, who is the chamber’s deputy majority leader, has represented a safely red seat in the northern Twin Cities suburbs since 2011.

Benson’s boss, state Senate Majority Leader Paul Gazelka, has also been talking about running for a while, and he’s “expected to make a public decision around the end of the [legislative] session.” No one knows exactly when the legislature—which, unusually, is split, with Democrats in charge of the House and Republicans controlling the Senate—will actually go home, though, as insiders tell the Minnesota Reformer, they don’t expect it to finish its work before the scheduled May 17 adjournment date. One unnamed lobbyist adds, “Watch to see how Gazelka’s governor ambitions play into an end of session deal. Gonna get messy.”

NEW JERSEY GOVERNOR — Perennial candidate Hirsh Singh has publicized a poll conducted by Brad Parscale, who was unceremoniously demoted as Trump’s first 2020 campaign manager, that shows him leading former Assemblyman Jack Ciatterelli 22-20 in the June 8 Republican primary. Pretty much everyone has treated Ciatterelli, who has the backing of the state’s powerful county party leaders, as the heavy frontrunner for months, though this is the first survey we’ve seen of the primary.

RHODE ISLAND GOVERNOR — State Treasurer Seth Magaziner’s team has confirmed that he’s thinking about taking on Gov. Dan McKee, who was elevated from lieutenant governor to the top job in March, in next year’s Democratic primary. That statement came after Magaziner, who is termed-out of his current post, unveiled his largest quarterly haul ever, to which the Boston Globe’s Dan McGowan responded, “If you didn’t know, he’s almost certainly running for governor next year.”

Magaziner outraised McKee $302,000 to $284,000 during the first three months of the year, and the treasurer ended March with a huge $1.3 million to $451,000 cash-on-hand edge. Two other Democrats who are eyeing the race, Secretary of State Nellie Gorbea and Providence Mayor Jorge Elorza, brought in smaller sums, though they both still had larger war chests than McKee: Gorbea took in $159,000 for the quarter and had $547,000 in the bank, while Elorza raised just $87,000 but had $955,000 on-hand. Physician Luis Daniel Muñoz, who is McGee’s only declared intra-party foe, entered the primary in April after the new quarter began.

GEORGIA SECRETARY OF STATE — Georgia state Rep. Bee Nguyen (D) “launched a campaign Tuesday to become Georgia’s next top election official, promising to expand voting rights in a state where a brutal and ongoing battle over ballot access has only intensified with recent Republican defeats,” the Atlanta Journal-Constitution reports.

“The Atlanta lawmaker would be the first Asian-American elected to a statewide political office in Georgia history if she flips the seat held by Republican Secretary of State Brad Raffensperger.”

“Her campaign, long expected by local Democrats, further transforms a contest that in some past Georgia election cycles was hardly an afterthought – and is now poised to be one of the nation’s most-watched down-ballot elections.”

ARIZONA 6TH CD — Democrat Jevin Hodge, who lost a 2020 race for one of the five seats on the Maricopa County Board of Supervisors by a tiny 50.05-49.95 margin, announced Monday that he’d challenge Republican Rep. David Schweikert. Schweikert himself prevailed 52-48 last year as Trump was carrying his district by a similar 51-47 spread.

FLORIDA GOVERNOR — Charlie Crist (D-FL) announced in a video that he’s running for his old job of governor again, this time as a Democrat. It’s probably not a coincidence that Rep. Val Demings (D-FL) released a biographical video on the same day.

Nate Cohn: “The expanding Democratic disadvantage in the Electoral College underscores how the growing diversity of the nation may not aid Democrats enough to win in places they most need help. Just as often, population growth is concentrated in red states — like Texas and Florida — where the Democrats don’t win nonwhite voters by the overwhelming margins necessary to overcome the state’s Republican advantage.”

“As for the Republicans, the widely held assumption that the party will struggle as white voters decline as a percentage of the electorate may be more myth than reality. Contrary to what Tucker Carlson says repeatedly on Fox News about the rise of ‘white replacement theory’ as a Democratic electoral strategy, the country’s growing racial diversity has not drastically upended the party’s chances. Instead, Republicans face a challenge they often take for granted: white voters.”