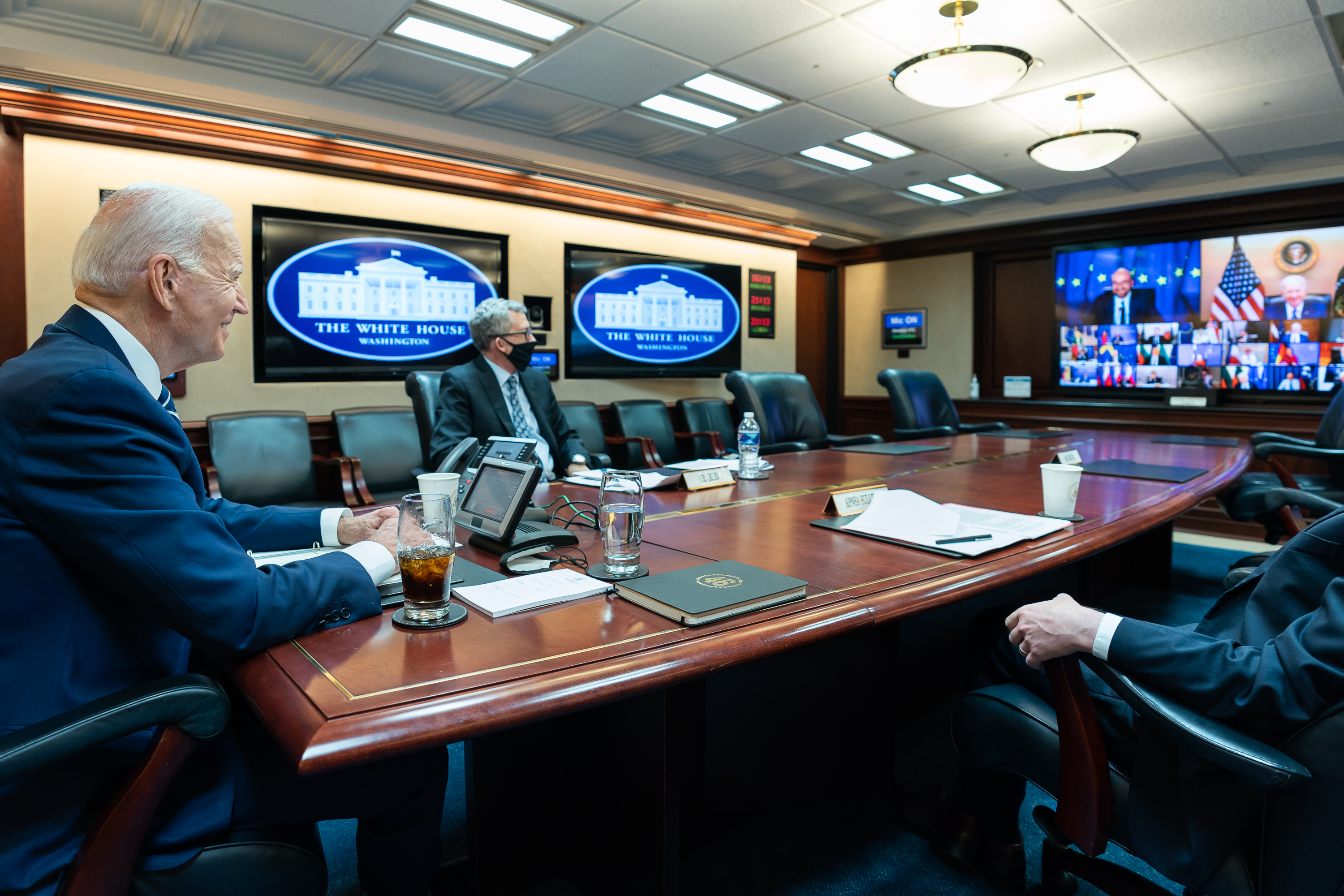 “Four migrant families separated at the US-Mexico border under the Trump administration will be reunited this week, the Department of Homeland Security announced Monday, marking the first reunifications under President Joe Biden,” CNN reports.

First Read: “When President Biden first faced this question earlier this year regarding his Covid-19 relief plan, he decided to go big, opting for his $1.9 trillion package over the Senate GOP’s offer of $600 billion. (Notably, those 10 Senate Republicans never made another counteroffer to split the difference between the two proposals.)”

“Now Biden is confronting the exact same question over his $2 trillion-plus infrastructure/jobs plan versus the Senate GOP’s counteroffer of nearly $568 billion. But this time, it appears the bipartisan negotiations are much more serious than they were back in January.”

“The election is over. Biden won. I know many of them don’t like the outcome. But elections have consequences.” — Cindy McCain, on CNN’s State of the Union.

Rep. Liz Cheney (R-WY) shot back at former President Trump over his claims that the 2020 election was stolen. Said Cheney: “The 2020 presidential election was not stolen. Anyone who claims it was is spreading THE BIG LIE, turning their back on the rule of law, and poisoning our democratic system.”

“We can’t embrace the notion the election is stolen. It’s a poison in the bloodstream of our democracy. We can’t whitewash what happened on January 6 or perpetuate Trump’s big lie. It is a threat to democracy. What he did on January 6 is a line that cannot be crossed.” — Rep. Liz Cheney (R-WY), quoted by CNN.

Former President Donald Trump was filmed at Mar-a-Lago ranting about the unofficial election audit being conducted by Republicans in Arizona, and insisting that they’ll be “finding votes” in other states to prove he won the 2020 election.

He added: “Because this was a rigged election, everybody knows it and we’re going to be watching it very closely but start off by you just take a look, it’s on closed circuit…”

It seems impossible that Cheney will remain in her party’s leadership much longer. It’s untenable for Cheney to run the House GOP’s messaging operation when she has been promoting a message with which no one seems to agree. And yet Cheney is only doubling-down on her criticism of Trump.

Playbook wonders if this is good for Cheney’s brand: “It might be counterintuitive, but some Republicans are speculating that Cheney wants to become a martyr on this issue. If she runs for president someday, there is no doubt which lane she will claim. And being able to say she stood her ground — even in the face of a mutiny from her own colleagues — would be a badge of honor, they say. But if she’s ousted from leadership, does that mean her career in the House is over?

Cheney apparently sees this fight as a battle for the soul of the Republican party. It’s just not clear it’s a fight she has any chance of winning.

“If a prerequisite for leading our conference is continuing to lie to our voters, then Liz is not the best fit. Liz isn’t going to lie to people.”  — Rep. Anthony Gonzalez (R-OH), quoted by The Hill, on Rep. Liz Cheney’s (R-WY) future in the House GOP leadership.

“The lies these days are moving at the speed of light while spreading so much darkness. Take, for example, the uproar over this New York Post story that claimed that copies of a children’s book written by Vice President Kamala Harris were being given to migrant kids in their welcome kits. That tale from the border didn’t just border on B.S., this was USDA, grade A bullshit. And the reporter who wrote this story resigned, claiming she was forced to make it up, but the damage was done, pumped out over the airwaves at the bullshit factory known as Fox News.”  — Jim Acosta, on CNN.

Axios: “Around 10% of Americans aren’t very eager to get the vaccine, but they’re not really hesitant either — they’re just waiting to get it until they get around to it, according to new Harris polling.”

New York Times: “Now, more than half of adults in the United States have been inoculated with at least one dose of a vaccine. But daily vaccination rates are slipping, and there is widespread consensus among scientists and public health experts that the herd immunity threshold is not attainable — at least not in the foreseeable future, and perhaps not ever.”

“Instead, they are coming to the conclusion that rather than making a long-promised exit, the virus will most likely become a manageable threat that will continue to circulate in the United States for years to come, still causing hospitalizations and deaths but in much smaller numbers.”

That means arguing about wearing masks will remain part of our politics for years to come.

Derek Thompson: “One in four Americans says they don’t plan to take the COVID-19 vaccine, and about half of Republicans under 50 say they won’t get a vaccine. This partisan vaccine gap is already playing out in the real world. The average number of daily shots has declined 20 percent in the past two weeks, largely because states with larger Trump vote shares are falling off the pace.”

“What are they thinking, these vaccine-hesitant, vaccine-resistant, and COVID-apathetic? I wanted to know. So I posted an invitation on Twitter for anybody who wasn’t planning to get vaccinated to email me and explain why.”

Rep. Steve Scalise (R-LA) told the Baton Rouge Advocate that he hasn’t been vaccinated yet. Said Scalise: “I just have to find a time that works. I could get it at the Capitol. But I would rather do it here in Louisiana as a formal event.”

It would take Scalise about 10 minutes to get vaccinated at the Capitol, where lawmakers have been receiving vaccines for five months now.

“New York, New Jersey and Connecticut are lifting most Covid-19-related restrictions on May 19, signaling a denouement for some of the country’s strictest lockdown orders and social distancing protocols imposed during the pandemic,” Politico reports.

Associated Press: “Florida Gov. Ron DeSantis moved to suspend all remaining COVID-19 restrictions imposed by communities across his state, signing into law on Monday freshly passed legislation giving him sweeping powers to invalidate local emergency measures put in place during the pandemic — including mask mandates, limitations on business operations and the shuttering of schools.”

“While the law DeSantis signed Monday goes into effect July 1, the Republican governor said he would issue an executive order to more quickly enact some provisions of the new law, including the preemption of existing coronavirus measures enacted by local governments such as mask mandates.”

“The European Commission on Monday proposed easing restrictions on non-essential travel for visitors who have been fully vaccinated against COVID-19,” Axios reports.

“The recommendation could be adopted by the European Union’s 27 member states as early as May 5, paving the way for the return of summer travel to one of the world’s most popular tourism destinations.”

New Republic: “Two months ago, researchers at Utah State University estimated that Arizona, California, and Nevada would collectively have to cut their intake of Colorado River water by 40 percent over the next three decades due to drought.”

“At a public meeting last Thursday, the Arizona Department of Water Resources confirmed the warnings: The cutbacks are coming, and soon.”

Arizona Republic: “With the Colorado River’s largest reservoir just 38% full and declining toward the threshold of a first-ever shortage, Arizona water officials convened an online meeting this week to outline how the state will deal with water cutbacks, saying the reductions will be ‘painful’ but plans are in place to lessen the blow for affected farmers next year.”

“Senate Democrats made a major commitment to muscle through Speaker Nancy Pelosi’s ethics and voting reform bill. Yet many say they have no idea how to pass it and wonder what exactly the end game is for a signature Democratic priority,” Politico reports.

“Democrats are preparing to kick off a sensitive internal debate over the issue this month as the Senate Rules Committee takes up the sprawling House package. But no Republicans support it, Sen. Joe Manchin (D-WV) hasn’t signed on and at least a half-dozen Democrats have issues with the bill, according to senators and aides. That’s not to mention the constraints of the filibuster in a 50-50 Senate.”

“What’s at stake is not only the party’s promise on a key issue, but also potentially the future Democratic majorities.”

Bloomberg Businessweek: “In 2020, Americans used 447 million short tons (to distinguish from metric tons) of coal. That’s enough to fill 4 million railroad cars, which sounds like a lot. But it’s also the country’s lowest annual coal consumption since 1965, and even that barely hints at the historical territory coal may soon explore. A few more years at the downward pace of the past decade, and U.S. coal use will reach levels last seen in the 19th century.”

“It would stand to reason that they might break with the party more often than other Democrats, and they are. And yet, they are voting with the party on average 95.6 percent of the time.”

“Then take the 19 Democrats in the Blue Dog Coalition…as a group, the Blue Dogs are sticking with fellow Democrats on 97.5 percent of party unity votes so far this year.”

This is why Nancy Pelosi is so effective as Speaker.

David Byler: “Texas has become a magnet for migrants from inside America. The Lone Star State nets 100,000 people from other states almost every year.”

“Many are moving from big, blue states where homes are more expensive and taxes are higher. New Texans are typically younger — and more likely to be college educated — than the rest of the state’s population.”

“Put simply, people move to Texas — from abroad and other states — because they can make more money, afford a home and raise a family. The economic engine is driving population growth.”

Scientific American: “Since the novel coronavirus began its global spread, influenza cases reported to the World Health Organization have dropped to minuscule levels. The reason, epidemiologists think, is that the public health measures taken to keep the coronavirus from spreading also stop the flu. Influenza viruses are transmitted in much the same way as SARS-CoV-2, but they are less effective at jumping from host to host.”

“As Scientific American reported last fall, the drop-off in flu numbers was both swift and universal. Since then, cases have stayed remarkably low… The U.S. saw about 600 deaths from influenza during the 2020-2021 flu season. In comparison, the Centers for Disease Control and Prevention estimated there were roughly 22,000 deaths in the prior season and 34,000 two seasons ago.”

HuffPost: “At this point in his presidency, Obama faced the Tea Party revolt. On April 15, 2009 ― Tax Day ― thousands of protesters took to the streets in cities across the U.S. to demonstrate against high taxes and increased government spending following the Great Recession.”

“Republicans insist the same type of backlash is coming for Biden if he continues down the path he’s on. But the party, still reeling from years of Donald Trump and a Jan. 6 insurrection at the Capitol, faces a problem: some of Biden’s policies are very popular.”