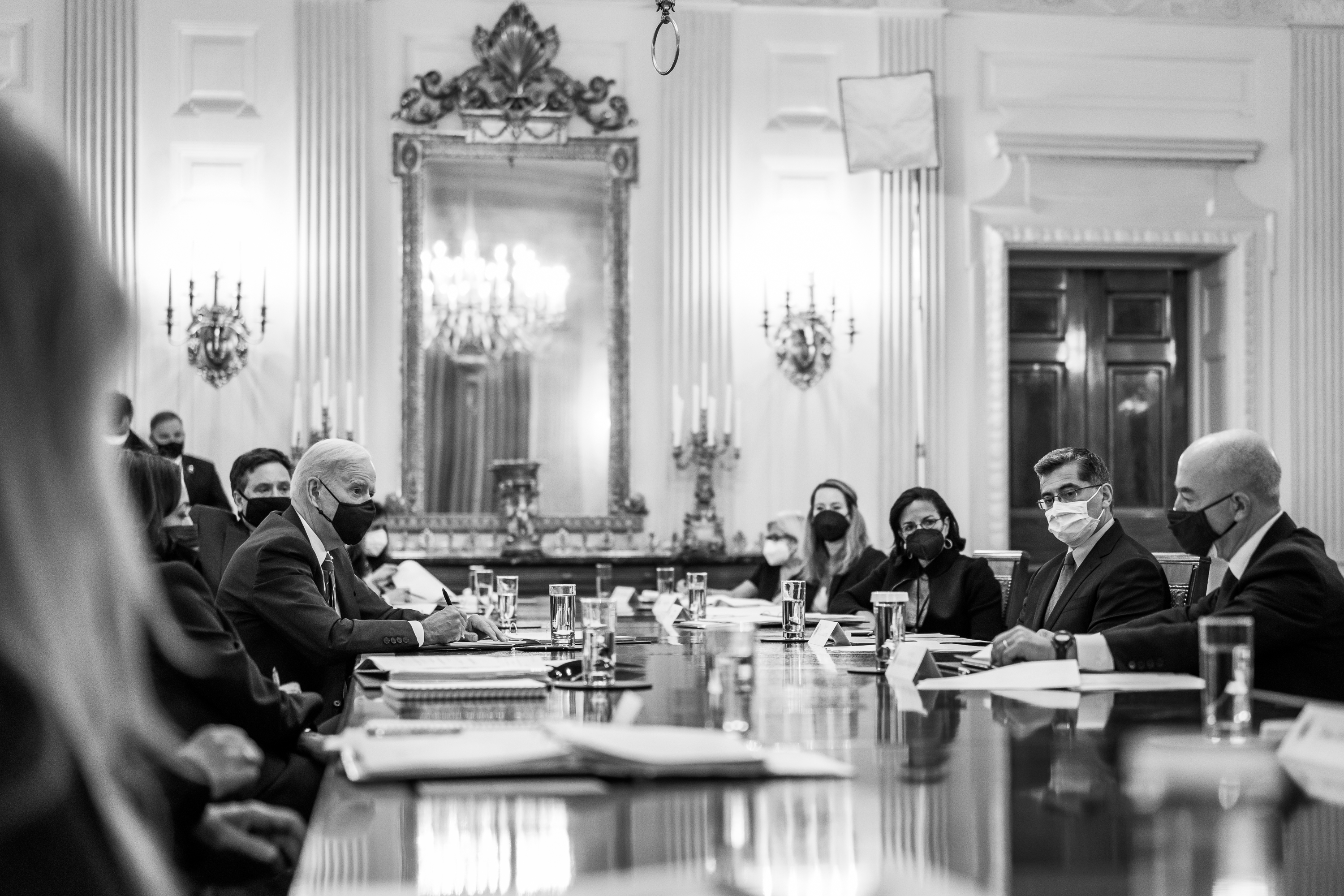 Associated Press: “Past the 100-day mark, with positive approval ratings and a far-reaching, nearly $2 trillion COVID-19 relief bill to show for it, Biden is now facing far more uncertain terrain. The president is racing against the calendar, governing with the most slender of majorities on Capitol Hill while knowing that historically the party that holds the White House loses seats in midterm elections, which would cost Democrats control of Congress after the 2022 vote.”

“His next 100 days will feature his first foreign trip but will be dominated by his push to pass his expansive plans on infrastructure and children, families and education, which would expand the social safety net for children, increase taxes on the wealthy and fund projects that his critics say are infrastructure in name only.”

CNN: How the economy is turning into a strength for Biden.

Sen. Susan Collins (R-ME) said that she would not support the proposed 28% corporate tax rate in President Biden’s $2.25 trillion infrastructure plan, saying jobs would be lost, The Hill reports.

“President Biden and top Democrats are signaling privately they are willing to make concessions over Biden’s $2.3 trillion infrastructure plan, or break it into chunks, if that will attract even a handful of Republican votes and allow them to notch a bipartisan win,” the Washington Post reports.

Sen. Tim Scott (R-SC) “had an optimistic tone about Washington’s progress on police reform discussions, emphasizing why he’s the right person to lead the charge on his side of the aisle,” Politico reports.

Said Scott: “I personally understand the pain of being stopped 18 times driving while Black. I also have seen the beauty of when officers go door-to-door with me on Christmas morning to deliver presents to kids in the most underserved communities. So I think I bring an equilibrium to the conversation.”

Scott added that a “significant number” of his Republican colleagues are willing to support his efforts to craft police reform legislation.

Politico: “Harris will put her own ‘stamp’ of priorities on the cabinet-level body that coordinates national security priorities, civilian exploration and the growing private economy of space, including ‘supporting sustainable development of commercial space activity, advancing peaceful norms and responsible behaviors in space, achieving peaceful exploration objectives with our allies and partners,’ an official said.”

Washington Post: “After a devastating week of soaring infections, India reported more than 400,000 new cases Saturday, a global record. Experts believe that number will climb even higher in the coming days, an unimaginable burden for a health system already under siege with hospitals issuing pleas for oxygen.”

“India’s experience underscores a sobering paradox: Even as the United States and Europe move away from the darkest days of the pandemic, other countries are engaged in a desperate struggle against the virus.”

“Two developing countries, enormous in population and geography, in the grip of devastating coronavirus outbreaks. Hospitals running out of supplies. Patients turned away. A new variant everywhere. Outside help desperately needed,” the Washington Post reports.

“For India, upended by record infection rates, the world has responded. The White House this week touted the delivery of more than $100 million in supplies. Singapore and Thailand sent oxygen. Britain’s Prime Minister Boris Johnson said the United Kingdom would do ‘all it can.’”

“But for Brazil, which has buried some 140,000 coronavirus victims in the past two months, the international response has been more muted. President Jair Bolsonaro in March called on international organizations to help… But the response has largely been a shrug, criticism of Brazil’s missteps — and limited action, so far.”

Federal agents seized at least 10 phones and computers from Rudy Giuliani during the dramatic Wednesday morning raid on his Manhattan apartment, Reuters  reports.

“Manhattan federal prosecutors are seeking to examine Rudy Giuliani’s communications with an array of former Ukrainian officials, as investigators home in on whether the former Trump lawyer’s push to remove a U.S. diplomat in Kyiv violated foreign lobbying rules,” the Wall Street Journal reports.

“The search warrants executed by federal investigators on Wednesday at Mr. Giuliani’s New York City apartment and office sought evidence related to Marie Yovanovitch, the former U.S. ambassador to Ukraine whom Mr. Giuliani pushed to oust in the spring of 2019, as well as communications with any U.S. government officials or employees regarding the former ambassador or her position.”

A raid by federal agents of an apartment and office belonging to Rudy Giuliani has left allies of Donald Trump feeling uneasy about what could come next, CNN reports.

Said one Trump adviser: “This was a show of force that sent a strong message to a lot of people in Trump’s world that other things may be coming down the pipeline.”

Daniel Dale: “By CNN’s rough count, Biden has made 29 total false claims in his first 100 days, about one every three-and-a-half days on average. That’s not cause for celebration. But I counted 214 false claims from Trump over his own first 100 days in office, more than two per day on average — and that was a very slow Trump period compared to what came later. Trump averaged about eight false claims per day in the full year I tracked as a CNN reporter, from August 2019 through July 2020.”

“An Oregon lawmaker who let violent far-right demonstrators into the state Capitol during a Dec. 21 special session was criminally charged on Friday with first-degree official misconduct and second-degree criminal trespass,” the Oregonian reports.

“Rep. Mike Nearman (R) was caught on security videos opening a door and allowing demonstrators to enter the building.”

Kansas state Rep. Mark Samsel (R) was arrested on charges of misdemeanor battery after getting into a physical altercation with a student while substitute teaching, the Kansas City Star reports.

In one video, Samsel tells the student: “You’re about ready to anger me and get the wrath of God. Do you believe me when I tell you that God has been speaking to me?” He then pushes him, and the student runs to the other side of the classroom.

In another video, he tells students: “Class, you have permission to kick him in the balls.”

Parents say Samsel “put hands on the student” and kneed him in the crotch. In a video immediately after the incident, the student is shown on the ground. Samsel is standing over him and says: “Did it hurt?”

HuffPost: “At this point in his presidency, Obama faced the Tea Party revolt. On April 15, 2009 ― Tax Day ― thousands of protesters took to the streets in cities across the U.S. to demonstrate against high taxes and increased government spending following the Great Recession.”

“Republicans insist the same type of backlash is coming for Biden if he continues down the path he’s on. But the party, still reeling from years of Donald Trump and a Jan. 6 insurrection at the Capitol, faces a problem: some of Biden’s policies are very popular.”

Sen. Bill Cassidy (R-LA) said Republicans and Democrats are “a lot closer than you might think” on a bipartisan path for President Joe Biden’s infrastructure plan, if the plan fits into a traditional definition of infrastructure, Politico reports.

Joe Biden, a proud graduate of the University of Delaware and Syracuse Law School who has bragged about going to a “state school,” has stocked his top White House staff with nearly twice as many Ivy League graduates as the first iteration of the Trump White House, Politico reports.

Forty-one percent of senior- or mid-level Biden White House staffers — or 82 people out of 201 aides analyzed — have Ivy League degrees.

North Korea on Sunday warned the United States will face “a very grave situation” because President Joe Biden “made a big blunder” in his recent speech by calling the North a security threat and revealing his intent to maintain a hostile policy against it, the AP reports.