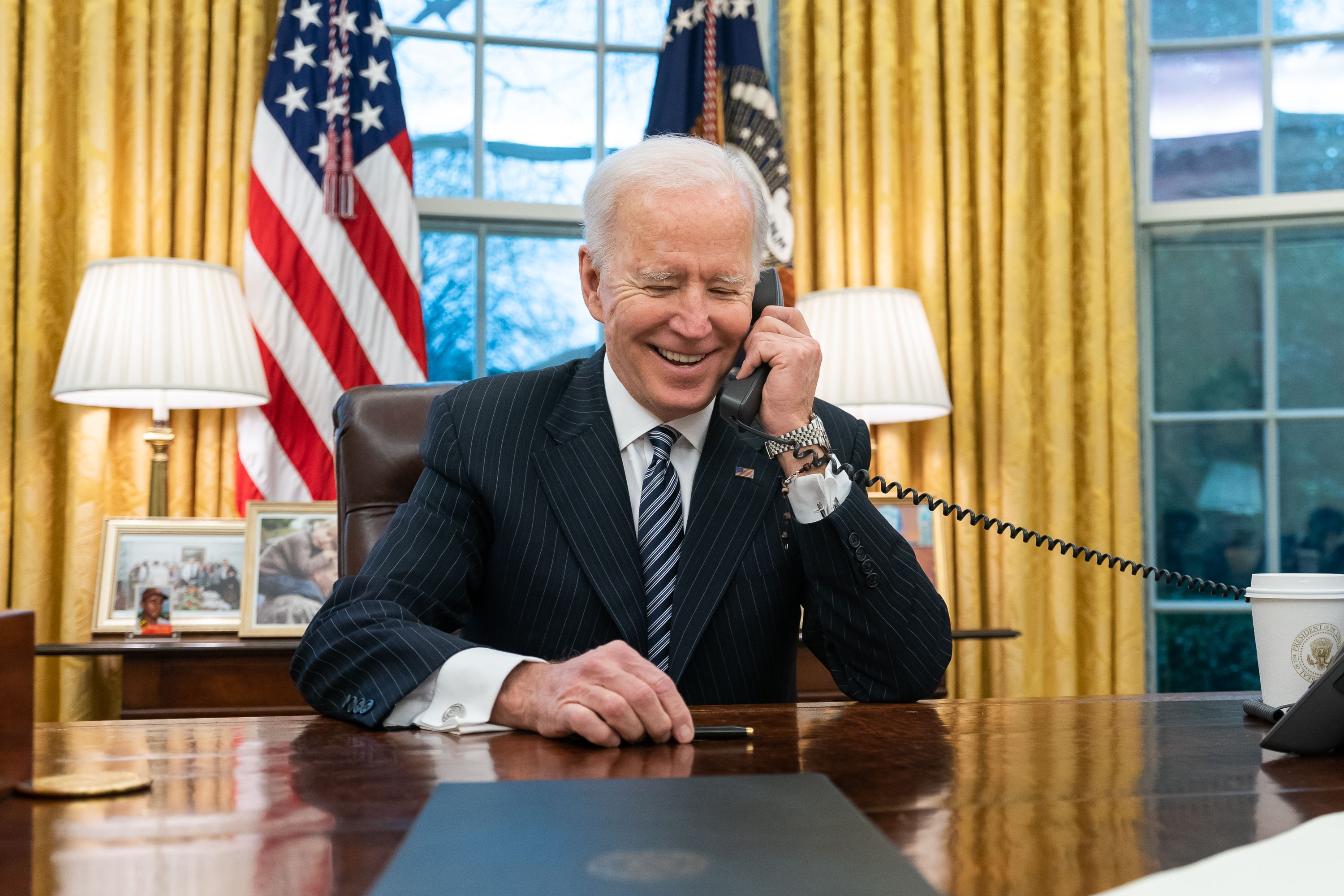 “Susan Wright, the widow of the late congressman, and fellow Republican Jake Ellzey are running first and second in the all-party special House election in Texas, which would lock Democrats out of the runoff and end their most promising chance to expand their House majority this year,” Politico reports.

“The Associated Press called a runoff spot for Wright late Saturday night, but Ellzey’s spot is still in question even with all precincts reporting their results. Ellzey, a state legislator, leads the third-place candidate, Democrat Jana Lynne Sanchez, by 0.4 percentage points — 354 votes. The AP has yet to call the second runoff slot.”

McCarthy is on the record saying that “Republicans will take the House in 2022.” The GOP rank-and-file absolutely believes him. And the history of midterm elections is on his side. Nonetheless, an unprecedented economic boom — which seems to be coming — has the potential to change these expectations.

A new ABC News/Ipsos poll finds 64% of Americans are optimistic about the direction of the country.

Former Vice President Mike Pence gave his first speech since leaving office on Thursday night, disparaging the Biden administration, while praising the Trump administration and reflecting on an era of “prosperity and security,” Axios reports.

Politico: Mike Pence re-emerges, but Trumpworld is moving on.

“Yet those records are not structured for identifying voters and when they have been used too broadly to cull rolls in the past, tens of thousands of people were put at risk of being disenfranchised, many of them poor and people of color.”

New York Times: “As Republican lawmakers in major battleground states seek to make voting harder and more confusing through a web of new election laws, they are simultaneously making a concerted legislative push to grant more autonomy and access to partisan poll watchers — citizens trained by a campaign or a party and authorized by local election officials to observe the electoral process.”

“This effort has alarmed election officials and voting rights activists alike: There is a long history of poll watchers being used to intimidate voters and harass election workers, often in ways that target Democratic-leaning communities of color and stoke fears that have the overall effect of voter suppression.”

Wall Street Journal: “Legal battles over redistricting begin in earnest now that the Census Bureau has released its apportionment data. Within hours of the release, top Democratic lawyer Marc Elias had filed lawsuits in three states with divided government control, anticipating an impasse between the parties that would result in state courts stepping in to draw congressional maps.”

“Republican lawyers are poring over the apportionment data in search of data discrepancies that could cause them to sue.”

Donald Trump last month “was pitched on launching a multi-billion dollar media and technology company built around his personal brand,” Axios reports. “It was to be comprised of three divisions: Trump+ (a subscription-based content business that gets compared to Netflix and Disney+), Trump Social Media (which would take a stake in existing companies or build its own), and Trump Technologies (which would provide alternatives to internet services like AWS and Stripe, and promise not to censor customers).”

Bloomberg: “The Democratic Senatorial Campaign Committee is targeting Republican Senators Marco Rubio and Ron Johnson and open seats in North Carolina and Pennsylvania in ads criticizing Republicans for not backing President Joe Biden’s efforts to boost the economy and vaccinate Americans against the coronavirus.”

Politico asked Sen. Cynthia Lummis (R-WY) about her vote to deny certification of the Electoral College and she responded: “When 40% of the American people think an election was massively fraudulent, we’ve got a problem.”

However, when pressed that Donald Trump’s false claims of mass voter fraud were why his supporters believed that, Lummis admitted: “Well, it probably was an overreaction. I do not believe that the fraud, that did occur, would have changed the election.”

House Minority Leader Kevin McCarthy (R-CA) repeated the false claim that President Joe Biden has proposed to restrict how much red meat Americans are allowed to eat in a Fox News interview.   McCarthy’s interviewer, Sean Hannity, did not correct him.

The conservative site Carolina Journal reports that some Republicans have already begun to express interest in running for North Carolina’s 13th District, just a day after GOP Rep. Ted Budd kicked off a bid for Senate.

Former Davidson County Commissioner Zak Crotts, who’s also treasurer of the state Republican Party, says he’s “thinking about” the race, though he cautioned that “we have to see what the district looks like” following redistricting. Meanwhile, law student Bo Hines, who’s been challenging Rep. Virginia Foxx in the GOP primary in the 5th District (which doesn’t currently neighbor the 13th), didn’t rule out the possibility of switching races, saying he’s keeping “all options open.”

“Former Florida Gov. Charlie Crist officially launches his comeback campaign for his old job early next week — his third bid for the office but the first as a likely underdog in what could be a crowded field,” Politico reports.

“Now a Democratic congressman, Crist is the biggest name to announce his candidacy but by no means the most talked-about. Democratic insiders are buzzing more about Rep. Val Demings running, and some former Crist loyalists are planning to work for her or for Agriculture Commissioner Nikki Fried, the only state-level elected Democrat, who has been preparing for months to challenge Republican Gov. Ron DeSantis.”

New York Times: “With the zeal of an evangelist, Mr. Yang raised tens of millions of dollars for the organization with the goal of creating 100,000 jobs in cities where they were most needed, such as Detroit. The aim led the Obama administration to declare Mr. Yang a ‘Champion of Change’ and paved the way for his political career.”

“But a review by The New York Times of Mr. Yang’s tenure at Venture for America found a yawning gap between his bold promises and the results of his efforts.”

“Only a small fraction of the group’s alumni have started companies, and most of those businesses have either closed or moved to traditional start-up hubs like Silicon Valley. Today, only about 150 people work at companies founded by alumni in the cities that the nonprofit has targeted.”

Sen. Mitt Romney was lustily booed and called a traitor by the more than 2,100 Republican delegates for the party’s state convention, the Salt Lake Tribune reports.

The cacophony of disapproval only ended after outgoing party chair Derek Brown scolded delegates to “show respect” for Romney.

“Top Republicans are turning on Rep. Liz Cheney, the party’s highest-ranking woman in Congress, with one conservative leader suggesting she could be ousted from her GOP post within a month,” Axios reports.

“The comments by Reps. Steve Scalise, the minority whip, and Jim Banks, chairman of the Republican Study Committee, carry weight because of their close relationship with House Minority Leader Kevin McCarthy — who is openly feuding with Cheney.”

This is not about a policy disagreement. It’s all about defending Donald Trump and refusing to acknowledge the January 6 insurrection.