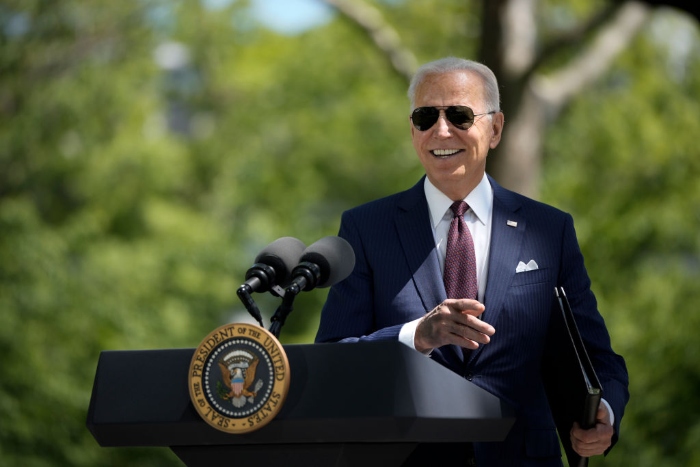 The Washington Post points out that, for those vaccinated, “the risk of serious illness from the coronavirus — and spreading the virus to others — is vanishingly low”: Out of 87 million people vaccinated, 7,157 experienced breakthrough infections. Of those, 498 were hospitalized and 88 died.

“Those percentages are far lower than the risk of being hospitalized with or dying of the seasonal flu, some experts note. They also represent much less risk than people are willing to take on every day when they drive in their car or engage in a sport.”

This really shows how the CDC’s mask guidance, which was revised this week, is still too strict for the vaccinated.

Politico: “Containment, not eradication, is the most realistic goal: Public health experts say the coronavirus is here for the long-haul. Now, the challenge for Biden, his response team and state health officials will be managing the rolling series of outbreaks possibly driven by more dangerous virus variants, while avoiding the wishful thinking of the Trump administration, which downplayed the disease’s lethality.”

“In the best-case scenario, public trust in the shots will keep rising, particularly among the most vulnerable, including minority groups the administration seeks to reach. Federal, state and local public health officials will quickly deploy expanded tools like rapid testing, wastewater surveillance and contact tracing to spot and contain new outbreaks before they spark a wider surge.”

Axios: The next 100 million vaccinations in the U.S.

President Joe Biden’s administration has launched a website, text-message tool and phone hotline to link Americans with Covid-19 shots near them as the pace of vaccination in the U.S. has plateaued, Bloomberg reports.

Sen. Roger Marshall (R-KS), who is a physician, told the HuffPost that he wore a white lab coat in a public service announcement urging people to get vaccinated after being advised by GOP pollster Frank Luntz.  Said Marshall: “What we’ve found is if we put on our white coat, it literally moves the needle.”

The Biden administration will restrict travel from India as that country grapples with a gigantic surge in coronavirus cases, CNBC reports.

“India’s coronavirus catastrophe is worsening. The country on Friday reported another record number of new cases over the preceding 24 hours, as the army opened its hospitals and patients struggled to access beds, oxygen and lifesaving treatment,” the Washington Post reports.

“Crematoriums are overwhelmed, and the health system is crumbling. Anger toward Prime Minister Narendra Modi is growing, especially over his decision to hold huge election rallies as infections soared. India’s death toll has passed 208,000.”

Biden said his administration inherited “one god-awful mess at the border” from former President Donald Trump. He said it’s the result of “the failure to have a real transition — cooperation from the last administration, like every other administration has done.”

“President Biden is cancelling projects to build a wall along the southern border using diverted defense funds and will use some funding to repair environmental damage from the wall’s construction,” The Hill reports.

Sen. Mark Kelly (D-AZ) “sounded a rare note of criticism after Biden’s Wednesday night address to Congress, asking the president for more federal resources at the border and calling the influx of migrants coming into his state a ‘crisis’ — language that Biden’s White House is resisting,” Politico reports.

“In his characteristically low-key way, Kelly didn’t back down Thursday from his knock on Biden for omitting a detailed plan for the border and his vow to ‘continue holding this administration accountable.’”

“By the time federal investigators searched the Manhattan home of Rudy Giuliani on Wednesday, they had amassed a trove of evidence from his associates in Ukraine, focusing most intently on Giuliani’s ties to Ukrainian oligarchs,”  Time reports.

“The witnesses, who spoke on condition of anonymity, described lengthy interviews with investigators in Europe, Manhattan and Washington, starting in the fall of 2019 and continuing through February. The calls and meetings with investigators grew more frequent and ‘intense’ after Joe Biden’s victory in last fall’s presidential election.”

“Two of the witnesses say they were working with Giuliani while cooperating with federal investigators.”

New York Times: “The long-running inquiry reached a turning point this week when FBI agents seized telephones and computers from Mr. Giuliani’s home and office in Manhattan… At least one of the warrants was seeking evidence related to Ms. Yovanovitch and her role as ambassador.”

“In particular, the federal authorities were expected to scour the electronic devices for communications between Mr. Giuliani and Trump administration officials about the ambassador before she was recalled in April 2019.”

“The warrant also sought his communications with Ukrainian officials who had butted heads with Ms. Yovanovitch, including some of the same people who at the time were helping Mr. Giuliani seek damaging information about President Biden, who was then a candidate, and his family.”

“The FBI warned Rudy Giuliani in late 2019 that he was the target of a Russian influence operation aimed at circulating falsehoods intended to damage President Biden politically ahead of last year’s election,” the Washington Post reports.

Meanwhile, Giuliani told Tucker Carlson that he offered FBI agents Hunter Biden’s hard drives while they raided his residence, but they wouldn’t take them.

Daily Beast: “On Wednesday, the apartment and office of former New York City mayor and Donald Trump lawyer Rudy Giuliani were raided by the feds. On Thursday, he picked up the phone and called Alan Dershowitz.”

Said Dershowitz: “I had spoken out a number of times against the raid, and Giuliani called me and asked me if I would share that view with his lawyers.”

“Dershowitz continued that he would be happy to talk to Giuliani’s lawyers about the Fourth Amendment issues surrounding the search of Giuliani’s apartment and the seizure of some of his electronic devices ‘as a sounding board,’ but he noted that he hadn’t heard from his lawyers yet.”

Giuliani claims that the search warrant at his home was illegal because electronic documents were on his iCloud account.

The scheduling of President Joe Biden’s address to the joint session of Congress in late April led many to believe the White House was worried about giving the speech in front of a sparse crowd or even that Biden might not be up to it.

It turns out Biden waited until his 99th day in office because he had more to talk about:

None of this was true back in February.

And based on the initial reaction to Biden’s speech — which was almost entirely positive among those who watched — it seems the White House made the right choice.

Los Angeles Times: “This isn’t the new administration’s first coordinated swing-state outreach — Biden, Harris and their spouses all hit the road in March for a victory lap following Congress’ passage of the president’s $1.9-trillion coronavirus relief package. And it’s a classic presidential play.”

“But the administration’s focus and message discipline, not to mention the deployment of multiple officials and spouses fanning out across the country, is an about-face from the Trump years and a frenetic presidency that was mostly a one-man show.”

“Much of Biden’s message is framed in contrast to his predecessor, an effort to convince Americans that the chaos of the past four years — and the woes of a year lost in many ways to the pandemic — is behind them.”

Vox: “No country handled the economic shock of Covid-19 perfectly. Every country, the US included, made mistakes, sometimes grave mistakes. But a detailed comparison suggests that the US had the strongest economic response to the pandemic, in terms of providing income to its citizens during lockdown and ensuring a strong, rapid recovery as the economy began to reopen.”

Said Obama adviser Jason Furman: “The US will come out of this economically better than any country that was similarly affected by the virus.”

“Speaker Nancy Pelosi said 75% of House lawmakers are now vaccinated against COVID-19 but that masks remain a requirement, even when speaking, inside the chamber,” the Washington Examiner reports.

Pelosi suggested that it was Republicans who were lagging behind in getting their shots and that they were asking her to shorten the votes.

“House Speaker Nancy Pelosi has set a target of passing an infrastructure bill by July 4, leaving Democrats weeks of negotiations on the spending both with Republicans and among themselves. With both the House and Senate out of Washington through next week, it may still be several weeks before a path forward emerges,” the Wall Street Journal reports.

“At stake is funding for paid leave, universal prekindergarten, and tuition-free community college in the $1.8 trillion plan announced Wednesday, and money for building roads, expanding broadband access, and manufacturing in the earlier $2.3 trillion proposal.”

“The coming debate will determine both the details of those funding plans and whether proposals tied to prescription drug pricing, a permanent extension of an enhanced child tax credit and funding for elder care are included in the emerging legislation.”

“The family of Ashli Babbitt, who was fatally shot while participating in the Jan. 6 invasion of the U.S. Capitol, plans to sue the police department and the officer who fired the gun for at least $10 million,” CNBC reports.

“Babbitt and a group of rioters gained access to a hallway outside the Speaker’s Lobby, which leads to the House chamber. She tried to climb head first through the broken glass window of a door separating the hallway from the lobby, which had been barricaded from the inside with furniture.”

The Biden administration has hired 1,500 presidential appointees to serve in key agency positions that don’t require confirmation – double the number of appointees hired by any prior administration by the 100-day mark, Axios reports.

NBC News: “Florida is on track to be the first state in the nation to punish social media companies that ban politicians like former President Donald Trump under a bill approved Thursday by the state’s Republican-led Legislature.”

“The Florida bill would prohibit social media companies from knowingly ‘deplatforming’ political candidates, meaning a service could not ‘permanently delete or ban’ a candidate.”

“One of the 39 bills Michigan Senate Republicans proposed to overhaul the state’s voting laws would make it a crime for certain officials to share information about an upcoming election on Twitter or other social media platforms,” the Detroit News reports.

Sen. Joe Manchin (D-WV) told reporters that he does not support the bill to make D.C. the nation’s 51st state, the Washington Post reports.

“Manchin, a key swing vote in the closely divided Senate, said he believed a constitutional amendment, rather than legislation, would be required to admit D.C. as a state. His stance deals a major blow to statehood advocates who were hoping for his support after the bill passed the House last week.”

It’s worth noting that West Virginia became a state by way of legislation passed by Congress and not a constitutional amendment.

“Household income rose at a record pace of 21.1% in March as federal-stimulus checks helped fuel an economic revival that is poised to endure with an easing pandemic,” the Wall Street Journal reports.

“The 21.1% March surge in income was the largest monthly increase for government records tracing back to 1959, largely reflecting $1,400 stimulus checks included in President Biden’s fiscal relief package signed into law in March.”