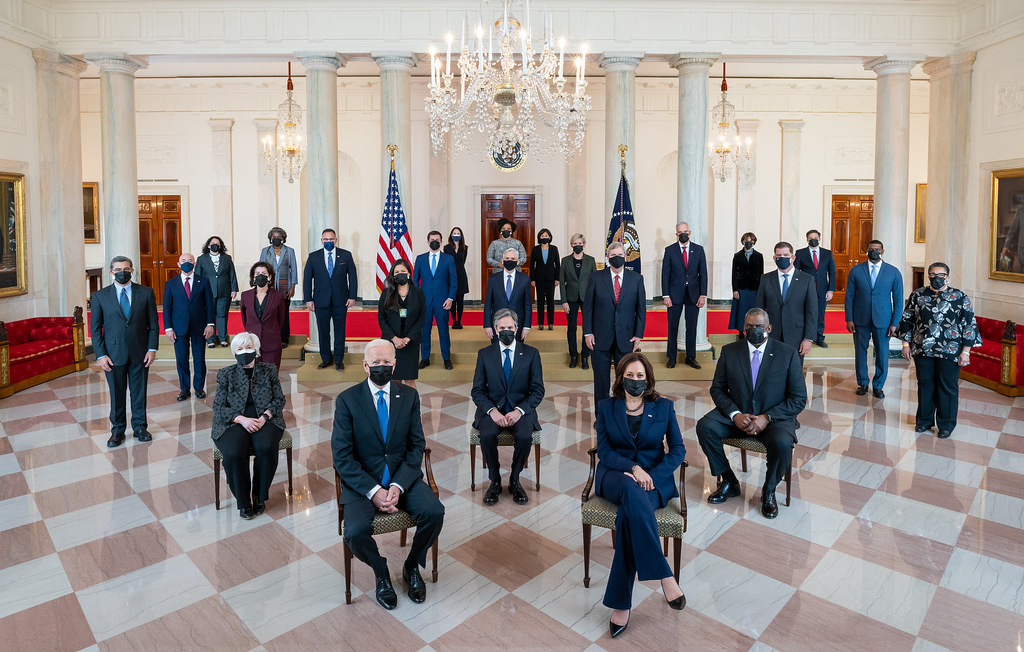 “The U.S. economy appears to have expanded rapidly in the first quarter, extending what economists project will be a robust, consumer-led recovery from the pandemic this year,” the Wall Street Journal reports.

“Fueled by a flood of federal cash to households and rising vaccinations, the nation’s gross domestic product likely grew at a 6.5% seasonally adjusted.”

“The stock market is set to close out President Biden’s first 100 days in office on Thursday with its best start to a presidential term since the days of Franklin D. Roosevelt,” the Wall Street Journal reports.

“Jay Powell signalled that the Federal Reserve was still far away from withdrawing support for the US economy, even after the central bank upgraded its view of the recovery,” the Financial Times reports.

“Vaccines appear to be starting to curb new Covid-19 infections in the U.S., a breakthrough that could help people return to more normal activities as infection worries fade,” the Wall Street Journal reports.

“By Tuesday, 37.3% of U.S. adults were fully vaccinated against Covid-19, with about 2.7 million shots each day. Data from Johns Hopkins University shows the seven-day average for new U.S. cases has fallen below the 14-day average for more than a week, which epidemiologists said is a strong signal that cases are starting to slide again after a recent upswing.”

Dr. Amash Adalja to Science News: “These vaccines will change your life. These vaccines were made to defang or tame the virus, and they’re doing an excellent job at that.”

New York Times: “As the United States vaccinates larger numbers of people and several states begin to reopen after seeing lower infection rates, the failure of U.S. authorities to test adult migrants for the coronavirus in jam-packed border processing centers is creating a potential for new transmissions, public health officials and shelter operators warn, even among migrants who may have arrived healthy at America’s door.”

“More than 170,000 migrants crossed the border in March — many coming from countries still grappling with high infection rates — but the Border Patrol is conducting no testing for the coronavirus during the several days that the newly arrived migrants are in U.S. custody except in cases where migrants show obvious symptoms.”

President Joe Biden told NBC News that he was not briefed about the search warrants executed at Rudy Giuliani’s apartment and office and learned about moves by federal investigators at the same time as the public.

He added: “I made a pledge. I would not interfere in any way — order or try to stop any investigation the Justice Department had in their way. I learned about that last night when the rest of the world learned about it.”

John Harris: “Though rarely described as gifted orator, Biden’s speech was a remarkable performance in part because it didn’t soar and largely didn’t even try to. In plain-spoken language, he depicted a breathtakingly large agenda as plain common sense. Instead of imploring partisans to take sides, he projected bewilderment that any practical-minded person of any persuasion could be opposed.”

Ronald Brownstein: “While most Democrats believe that going big offers them their best chance of maintaining at least one of their majorities next year, many quietly acknowledge that, no matter what they achieve, they face long odds of holding the House in the first midterm election after the decennial redistricting process spurred by the census. And given the difficulty of reaching consensus with Republicans, many Democrats think that their window for significant legislative accomplishments will slam shut if the GOP wins either chamber in 2022.”

Said one senior official: “There is this recognition of this moment and how fleeting it is, and an evaluation that, absent the trifecta of control, it is very hard to move big policy. So you have to take your shot.”

“Hawaii was poised to become the 49th state to recognize Juneteenth after the House and Senate on Tuesday passed legislation designating June 19 as a day to commemorate the end of slavery in the United States,” the Sioux Falls Argus Leader reports. “If Hawaii’s governor signs the bill, South Dakota would be the only remaining state that doesn’t recognize the day as either a state holiday or a day of observance.”

West Virginia Gov. Jim Justice (R) announced the state will begin offering $100 savings bonds to people aged 16 to 35 who get vaccinated. “If I’m able to pull this off and we are able to shut this down for the small price of $27.5 million… I would tell those critics to kiss my butt.”  — West Virginia Gov. Jim Justice (R), quoted by the Washington Post, on his plan to pay young people if they get vaccinated.

Using advice reserved for Americans living in war-torn countries, the U.S. has urged all Americans to leave India “as soon as possible” to escape the worsening COVID-19 crisis there.

First Read: “That brings us to the GOP response from Sen. Tim Scott (R-SC) who criticized Biden for not uniting America, for spending and taxing too much, and over the situation at the border.”

“But what his speech didn’t do was present an alternative, forward-looking political future — other than praise what happened during Trump’s presidency.”

“President Biden is expected to begin naming his choices for high-profile ambassador postings in May or possibly as soon as this week, revealing winners among a pecking order of Biden friends, donors and aides that spans decades,” the Washington Post reports.

“The process has been complicated by sensitivity to naming candidates other than the coterie of well-connected White people, most of them men, who have been the mainstay of Biden’s political circle.”

The selection process has taken longer than it has for Biden’s predecessors because of that issue and because Biden “knows too many people and he has too many friends.”

“Speaker Nancy Pelosi (D-CA) is now leading the slimmest House majority since World War I, putting a premium on party unity as leaders this spring craft trillions of dollars of infrastructure and antipoverty legislation,” the Wall Street Journal reports.

“A handful of Democratic lawmakers have said they would try to block any tax changes proposed by President Biden that don’t also restore state and local tax deductions. Others, including members of the outspoken progressive wing, are lobbying for Medicare expansion, longer-lasting child benefits and more spending to address climate change, although for now they have emphasized cooperation rather than issuing ultimatums.”

Washington Post: “The Biden administration is expected to announce this week that it will propose a ban on menthol cigarettes, an action urgently sought by tobacco opponents and civil rights groups that say African Americans have been disproportionately hurt by the industry’s aggressive targeting of Black communities.”

“European Union lawmakers gave their approval to the post-Brexit trade accord with the U.K., marking the final step in the ratification process and the end of four years of political brinkmanship,” Bloomberg reports.

“Justin Trudeau’s government survived a confidence vote, avoiding an election for now, as its first budget in two years passed in Canada’s legislature with the support of a left-leaning opposition party,” Bloomberg reports.  “In a Monday evening vote, lawmakers from the New Democratic Party backed Finance Minister Chrystia Freeland’s plan to help the Canadian economy recover from its pandemic-induced losses. The vote in the House of Commons was 178 to 157 in favor.”

Associated Press: “When most of the U.S. went into lockdown over a year ago, some speculated that confining couples to their homes — with little to entertain them beyond Netflix — would lead to a lot of baby-making. But the statistics suggest the opposite happened.”

“Brendan Hunt, an enthusiastic Trump supporter who called for killing members of Congress days after the Jan. 6 insurrection, was found guilty Wednesday of making a death threat against elected officials,” the Washington Post reports.

“It took the jury in his case about three hours to reach a verdict, finding that comments Hunt made in a disturbing video posted online two days after the U.S. Capitol riot amounted to a genuine threat to murder elected officials in Washington.”

A white nationalist featured in an infamous, viral photograph from the 2017 “Unite The Right” rally in Charlottesville, Virginia, joined the U.S. military, but was kicked out before he could attend basic training, the HuffPost reports.

Mayor Bill de Blasio (D) announced that New York City plans to “fully reopen” on July 1, with no restrictions on restaurants, retail, or any other business, Axios reports.