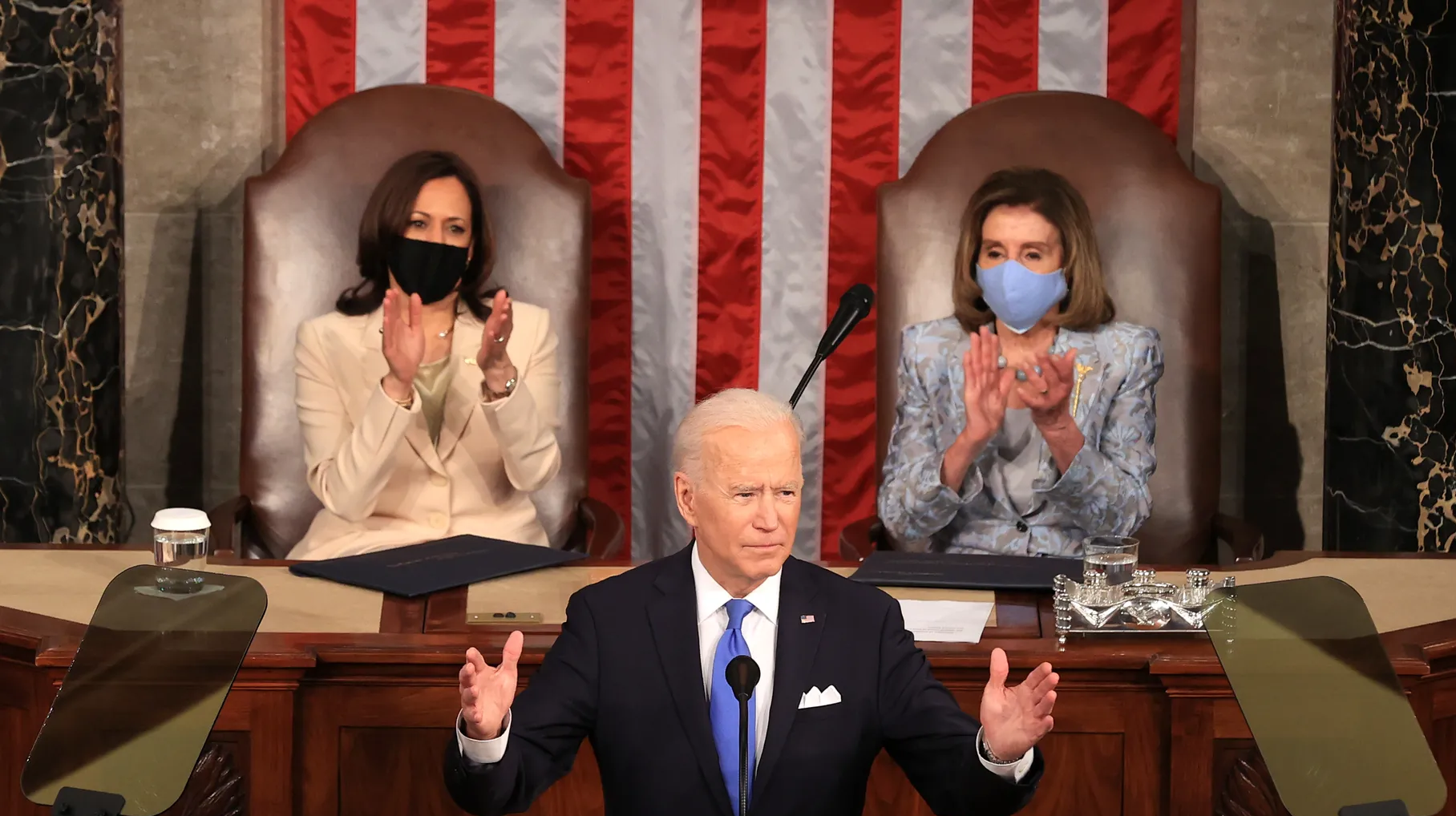 “President Biden called for a broad reshaping of American society, using his first formal address to Congress to urge a vast expansion of safety net and educational programs while promising to harness the government to create jobs and opportunity for those often left behind,” the New York Times reports.

Wall Street Journal: “The president’s proposals represent an ambitious effort to expand the government’s role in shaping the economy.”

CNN: “If there was one argument animating Biden’s speech — and his entire presidency to date — is that more government, when working right, can improve Americans’ lives. It’s a simple proposition that bucks a decades-long trend in both parties toward a smaller, less interventionist Washington.”

Politico: “The speech marks an early victory lap for a White House fashioning itself as having one of the most consequential starts to a presidency in American history. It is also an opportunity to build momentum for two proposals — the American Jobs Plan and the American Families Plan — that, if enacted, would alter the course of the country for decades to come.”

Josh Marshall: “Tim Scott had a tough job following Biden and it showed. His speech seemed premised on Biden delivering a confrontational and aggressive speech that he didn’t give. Scott seemed to argue that Biden had brought to an end some glorious era of national unity. This is absurd. I don’t think it was effective.

CBS News: “Most viewers who tuned in to watch President Biden’s speech liked what they heard and came away feeling optimistic about America. Speech viewers described the president as “Presidential, “Caring,” “Inspiring” and “Bold.”

CNN: “51% of Americans who watched President Joe Biden’s address to Congress had a very positive reaction to the speech, and 71% said they walked away feeling more optimistic about the country’s direction, according to a CNN Poll conducted by SSRS.

That perception carries through to the major issues covered in the speech. More than 8 in 10 said Biden’s proposals on the coronavirus pandemic would move in the right direction (86%), and 74% said the same about racial injustice. Around 7 in 10 said the President’s policies on the economy (72%), gun laws (70%) and taxes (70%) were steps in the right direction. Slightly fewer said the same about immigration (65%).And Biden’s focus on those issues appeared to hit the right mark for speech-watchers. Overall, 68% said Biden has had the right priorities so far as president, while 32% said he has not paid enough attention to the most important problems.”

“President Joe Biden will unveil on Wednesday a sweeping $1.8 trillion plan to expand educational opportunities and child care for families, funded in part by the largest tax increases on wealthy Americans in decades — the centerpiece of his first address to a joint session of Congress,” Bloomberg reports.

Playbook: “Most of these new spending proposals are popular. Taxing the rich to pay for them is also popular. It’s a formula that has worked well for Biden so far. What isn’t always popular — as Bill Clinton and Barack Obama learned — is making big changes to health care. Fighting the drug lobby and the insurance industry isn’t easy. Which might explain why Biden nixed the Medicare reforms for now.”

Federal investigators in Manhattan executed a search warrant at the Upper East Side apartment of Rudy Giuliani, the New York Times reports.

“Executing a search warrant is an extraordinary move for prosecutors to take against a lawyer, let alone a lawyer for a former president, and it marks a major turning point in the long-running investigation into Mr. Giuliani.”

“While the warrant is not an explicit accusation of wrongdoing against Mr. Giuliani, it shows that the investigation has entered an aggressive new phase. To obtain a search warrant, investigators need to persuade a judge they have sufficient reason to believe that a crime was committed and that the search would turn up evidence of the crime.”

The Washington Post reports the warrant allowed for the “seizure of his electronic devices.” Giuliani’s office was also searched, according to Maggie Haberman.

In addition to Rudy Giuliani, the feds also executed a search warrant on Wednesday on Victoria Toensing.

A federal prosecutor in the Reagan administration, Toensing has made a name for herself as a conservative media personality along with her husband, Joe DiGenova. But it’s the couple’s involvement in the Ukraine affair that got President Trump impeached in 2019 which may be related to the warrant.

There are conflicting reports on the target of the warrant. Per Politico, the feds seized a cell phone, while the New York Times’s Maggie Haberman reported that the warrant was executed on Toensing’s D.C.-area home.

Toensing’s firm released a statement saying that she “was informed that she is not a target of the investigation.” A spokesperson for the U.S. attorney’s office for the Southern District of New York, which is leading the probe, declined to comment.

“Mr. Cuomo’s most senior aides engaged in a sustained effort to prevent the state’s own health officials, including the commissioner, Howard Zucker, from releasing the true death toll to the public or sharing it with state lawmakers, these interviews and documents showed.”

DC Metropolitan Police officer Michael Fanone, who was brutally assaulted while defending the US Capitol during the January 6 insurrection, told CNN that it’s been difficult to watch some elected officials and others “whitewash” the episode in its aftermath.

Said Fanone: “I experienced the most brutal, savage hand-to-hand combat of my entire life. Let alone my policing career, which spans almost two decades. It was nothing that I had ever thought would be a part of my law enforcement career, nor was I prepared to experience.”

“I experienced a group of individuals who were trying to kill me to accomplish their goal.”  — D.C. police officer Michael Fanone, quoted by the Washington Post, on the January 6 insurrection at the U.S. Capitol.   Meanwhile, the House Republican leadership is actively denying it happened.

More than 20 Democrats have said they won’t support additional infrastructure or family spending without a SALT fix.

“More than a year after Brazil detected its first case of COVID-19, the country is facing its darkest phase of the pandemic yet. Researchers are devastated by the recent surge in cases and say that the government’s failure to follow science-based guidance in responding to the pandemic has made the crisis much worse,” Nature reports.

MIT Technology Review: “[India] set a global record for new cases for the fifth day in a row yesterday, reporting 352,991 and 2,812 deaths. The true figure is almost certainly far higher. Modeling by researchers from the University of Washington’s Institute for Health Metrics and Evaluation suggests the true figure for new daily cases in India is likely to now number in the millions.”

New York Times: “Crematories are so full of bodies, it’s as if a war just happened. Fires burn around the clock. Many places are holding mass cremations, dozens at a time, and at night, in certain areas of New Delhi, the sky glows. Sickness and death are everywhere.”

The Guardian: “Crematoriums in Delhi are being inundated with so many bodies that they have been forced to build makeshift funeral pyres on spare patches of land as the Covid crisis sweeping India led to an explosion of new cases.”

“Even as China’s President Xi Jinping mobilized a ‘people’s war’ against the coronavirus, Chinese warships were busy on another front: maintaining their pressure campaign in the South China Sea, where a buildup of military activity foreshadows a new U.S.-China cold war,” the Los Angeles Times reports.

Thomas Friedman: Is there war coming between the U.S. and China?

New York Post reporter Laura Italiano says she has resigned from the newspaper after being told to write a false story about Vice President Kamala Harris.

The entire editorial staff at the New York Post should be fired.

“An employee petition at Simon & Schuster demanding that the company stop publishing authors associated with the Trump administration collected 216 internal signatures and several thousand outside supporters, including well-known Black writers,” the Wall Street Journal reports.  The letter asks the publisher not to treat “the Trump administration as a ‘normal’ chapter in American history.”

New York Times: “Many publishers and editors have said privately that they would be reluctant to acquire a book by Mr. Trump because of the outcry that would ensue and the potential legal exposure they would face if Mr. Trump used a memoir to promote the false view that he won the 2020 election.”

“But the reticence extends beyond Mr. Trump himself, and several publishers acknowledge that there are certain ideological lines that they won’t cross. Some said they wouldn’t acquire books by politicians or pundits who questioned the results of the presidential election. Another bright line is working with people who promoted the false narratives or conspiracy theories that Mr. Trump espoused. Certain literary agents representing Trump officials have adjusted their sales tactics. A few are avoiding large auctions in hopes of staving off a backlash until after a contract is signed.”

The U.K.’s Electoral Commission announced an investigation into allegations that Prime Minister Boris Johnson had Conservative Party donors “secretly pay” for a renovation of his apartment at No. 11 Downing Street, the Times of London reports.

Axios: “It’s unprecedented for a sitting prime minister to face this kind of investigation, which could result in a fine of up to $20,000 and a referral to police if the violations are serious.”

Sources who heard U.K Prime Minister Boris Johnson say he would rather “let the bodies pile high” than allow a third coronavirus lockdown say they are willing to testify under oath that he made the comments, ITV News reports.   Johnson denied making the comments after a Daily Mail report, but The Guardian and Politico have also spoken to multiple sources who confirm the remarks.

Washington Post: “In the 100 days since Harris cemented herself in the history books merely by taking her oath of office, she has demonstrated some of the characteristics that make her a singular figure on the national political stage — some of the same traits that drew 22,000 cheering supporters to Oakland City Hall two years ago to help start a potentially historic presidential campaign.”

“But as Harris has begun to settle into her new role, many who have interacted with her since Jan. 20 — Inauguration Day — and some longtime supporters say the coming months will provide clarity on a question hovering over her tenure: whether the nation’s first non-White female vice president will emerge as the clear heir apparent to lead the Democratic Party and win the presidency in a post-Biden era.”

Politico: “One hundred days into the Biden administration, the White House is a tight ship defined by insularity, internal power centers and top down micromanagement — interviews with nearly two dozen people across the administration, including senior White House officials, reveal. The result is a unit that doesn’t leak (at least not that often) and that stays on script (most of the time). But it is also one where there is competition to show proximity to the boss and occasional difficulty in moving agenda items along in a timely manner.”

“Still, some aides complain Biden is kept in too much of a bubble, one where few people can get his ear outside of a cadre of loyalists he’s cultivated for decades. Exhaustion is setting in amid a punishing — and relentlessly serious — remote work regimen, with little opportunity for the levity breaks of past White Houses. Others concede that the heavy-handedness is mucking up the works.”

“Top White House officials have quietly been meeting — on the Hill and over the phone — with Republican senators who drafted a counterproposal to President Biden’s infrastructure plan,” Axios reports.

“The GOP senators say they’re optimistic the Biden administration is open to concessions and can reach a compromise. They’ve been heartened by their talks with White House Chief of Staff Ron Klain, counselor to the president Steve Ricchetti and legislative affairs director Louisa Terrell.”