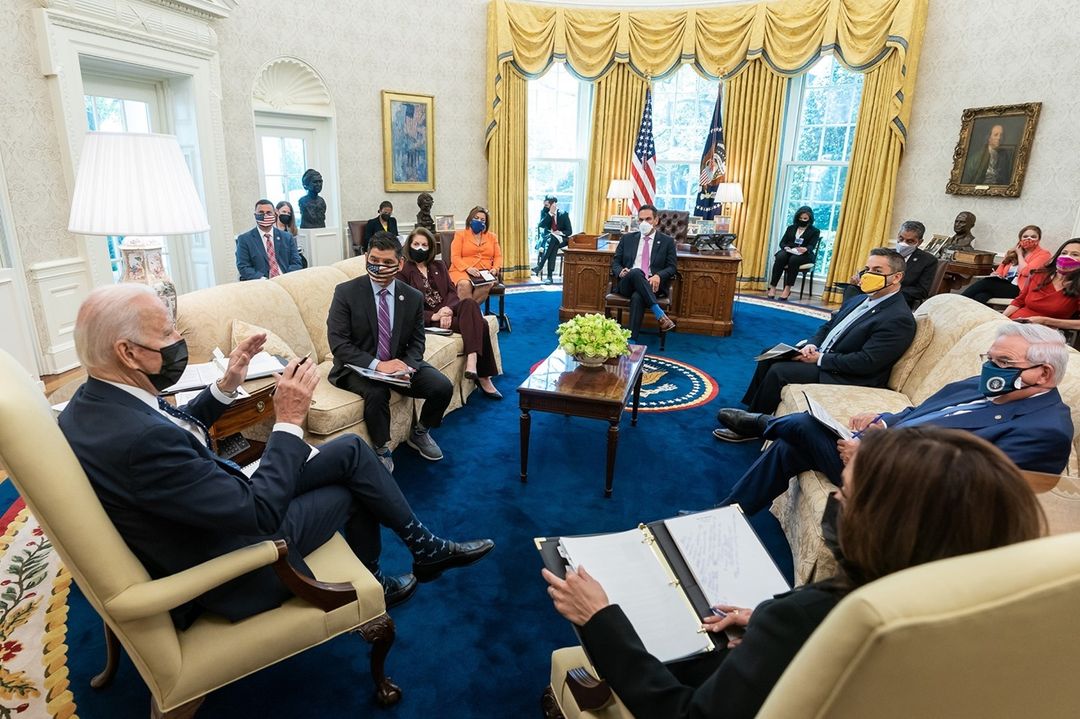 Jonathan Chait: “Biden’s strategy of boringness is a fascinating counterpoint to a career spent trying desperately to be interesting. Biden used to overshare, with frequently disastrous results that led him to accurately self-diagnose as a ‘gaffe machine.’ Whether his advanced age has slowed him down or made him wiser, he has finally given up his attention-seeking impulse and embraced the opposite objective.”

“Biden’s success is a product of the crucial yet little-appreciated insight that substantive advances don’t require massive public fights. The drama of inspiration and conflict is not only unnecessary to promote change but even, in certain circumstances, outright counterproductive.”

Playbook: “The key insight here is that talking too much about his agenda, aside from its most blandly popular pillars — Covid and recession bad! Infrastructure and jobs good! — only serves to polarize debate around the issues and provoke a more ferocious backlash from the right. Better to say nothing and ram stuff through Congress in enormous bills than to speak every day making a detailed case for each agenda item.”

“President Biden spent his first 100 days trying to engineer the end of the coronavirus and start of a job boom. The next 100 are more audacious and risky: Try to re-engineer the very fundamentals of America — inequality, voting rights and government’s role in directing economic growth,” Axios reports.
“Biden advisers feel they have a huge opening to raise taxes and pick winners in the energy markets, in part because Republicans and business no longer lock arms — and wallets — in opposition to the reordering of capitalism.”

The Los Angeles Times says President Biden “has an ability to put forward progressive ideas in a way that strikes centrist voters as nonthreatening.”

Said Democratic strategist Cornell Belcher: “You cannot underestimate how comfortable Uncle Joe is for a lot of people. They give an old, white guy the benefit of the doubt.”

“Even as Biden has pushed activist policy, he’s succeeded in lowering the temperature of Washington’s political debates. That reduced partisan intensity has helped him, strategists in both parties say. But it could create a problem down the road, depriving Biden of the fervent support that can sustain a president in bad times.”

America’s top general in Afghanistan said that the U.S. military has begun closing down operations in the country and that Afghanistan’s security forces “must be ready” to take over, the AP reports.

“American tourists who have been fully vaccinated against Covid-19 will be able to visit the European Union over the summer, more than a year after shutting down nonessential travel from most countries to limit the spread of the coronavirus,” the New York Times reports.

“The fast pace of vaccination in the United States, and advanced talks between authorities there and the European Union over how to make vaccine certificates acceptable as proof of immunity for visitors, will enable the European Commission, the executive branch of the European Union, to recommend a switch in policy that could see trans-Atlantic leisure travel restored.”

Peter Wehner: “The hope of many conservative critics of Donald Trump was that soon after his defeat, and especially in the aftermath of the January 6 insurrection, the Republican Party would snap back into its former shape. The Trump presidency would end up being no more than an ugly parenthesis. The GOP would distance itself from Trump and Trumpism, and become a normal party once again.”

“But that dream soon died. The Trump presidency might have been the first act in a longer and even darker political drama, in which the Republican Party is becoming more radicalized. How long this will last is an open question; whether it is happening is not.”

Will Saletan: “The Republican base is thoroughly infected with sympathies for the insurrection.”

“Vice President Kamala Harris will make the case before United Nations members on Monday that now is the time for global leaders to begin putting the serious work into how they will respond to the next global pandemic,” the AP reports

“The Supreme Court announced Monday it will consider the scope of the Second Amendment next term in a case concerning a New York law that restricts an individual from carrying a concealed handgun in public,” CNN reports.

“It has been more than a decade since the justices have ruled on significant case concerning the right to bear arms, and it comes in the wake of several mass shootings and the Biden administration’s push for enhanced gun regulations.”

NPR on the Supreme Court taking up a case on anonymous donations: “At issue is a California law, similar to laws in other states, that requires tax-exempt charities to file with the state a list of their large donors — a copy, in fact, of the list they file annually with the IRS.”

“Under both federal and California Law, the names and addresses are confidential, and it is illegal to disclose them publicly.”

“Wearing masks and restricting large gatherings were essential to controlling the pandemic’s worst peaks. But infection levels are dropping and vaccination rates rising. This is the time to revisit rules on masking and distancing in low-risk outdoor settings like parks and sports venues. Easing these rules would move more activity outdoors, which reduces viral transmission.”

President Biden is expected to announce new mask guidance tomorrow for those who have been vaccinated.

“If the nation is in the midst of a historic reckoning on racism, most leaders of the Republican Party are not participating,” the AP reports.

“The moves reflect a stark political reality: As America grows more diverse, the Republican Party continues to be led almost entirely by white people, particularly men, who cater to an overwhelmingly white base. And despite fierce criticism from civil rights leaders and growing concern from business leaders who are traditional allies, many Republicans see no problem.”

“An anti-Trump conservative group is launching an effort to track and evaluate whether Republicans in Congress, in the group’s view, have acted to either undermine or uphold democracy and democratic values and what role, if any, they played in attempts to overturn the 2020 election,” CNN reports.

“The Republican Accountability Project has created what it’s calling a GOP Democracy Report Card, which assigns grades to Republican members of Congress ranging from an ‘A,’ which the group describes as excellent, to an ‘F,’ which it describes as very poor.”

The Washington Post looks at what’s in the new $1.8 trillion spending bill that President Biden will introduce on Wednesday night in his address to Congress:

“The key components of the plan consist of roughly $300 billion in education funding, the biggest pot of which includes funding to make two-year community colleges tuition-free; $225 billion in child-care funding; $225 billion for paid family and medical leave; $200 billion for prekindergarten instruction; and $200 billion to extend more enhanced Affordable Care Act subsidies, according to three people briefed on the plan who spoke on the condition of anonymity. The plan would also extend a more robust child tax credit until 2025, the people said, a measure that could cost as much as $400 billion, as well as extend a more robust tax credit for workers.”

However, there a caveat: “Aides repeatedly stressed that the details of the plan were subject to change and that final decisions had not yet been made.”

Alaska Airlines told the Anchorage Daily News that State Senator Lora Reinbold (R) has been banned from its flights for refusing to follow mask-wearing rules.

There’s no overland road access from Reinbold’s district to the state capital in Juneau and Alaska Air provides the only airline service. That means if Reinbold wants to travel to the capital, the trip will take roughly three days, including a part by boat.

A video shows Reinbold arguing with airport staff about wearing a mask.