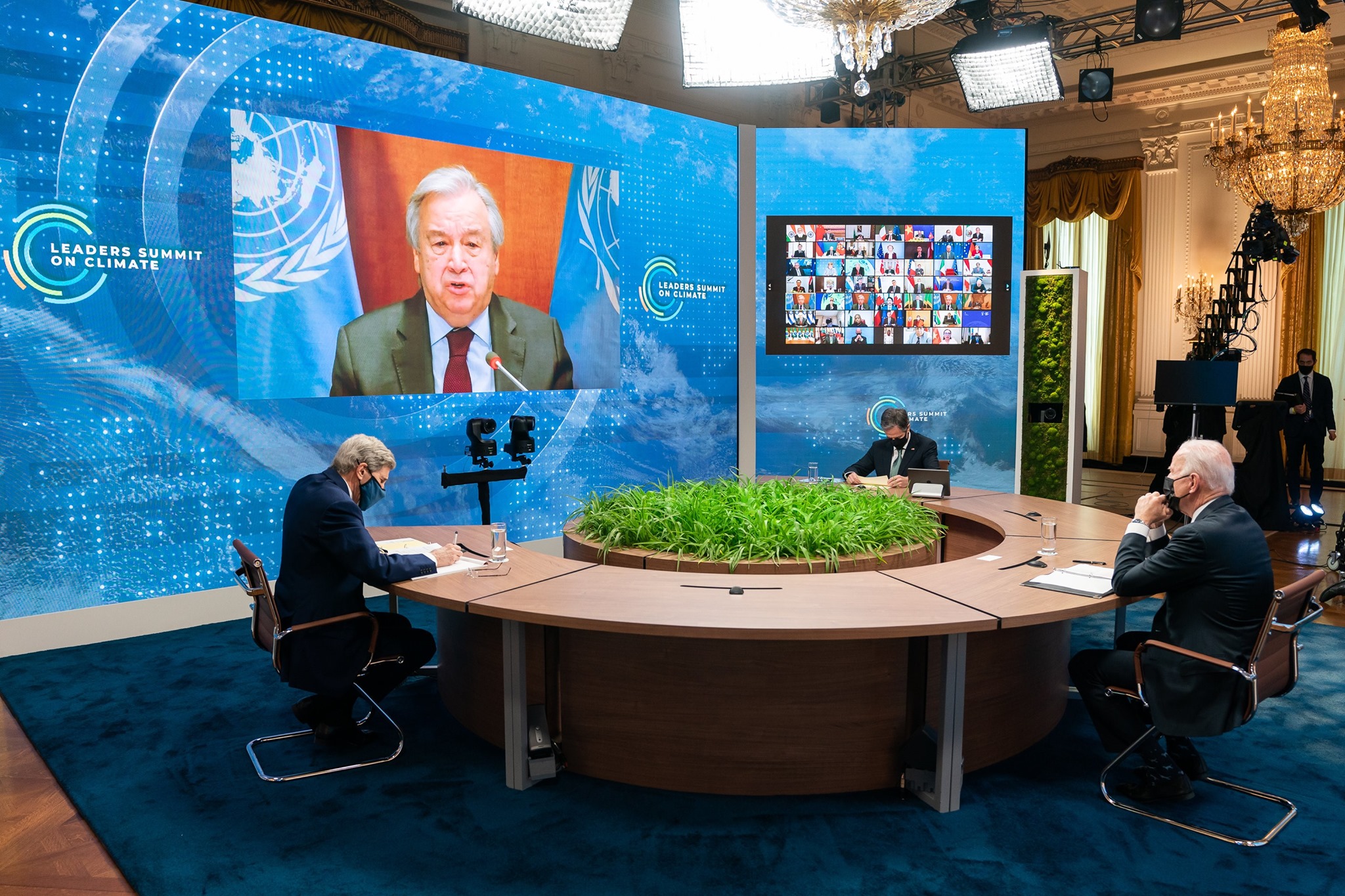 “A U.S. health panel says it’s time to resume use of Johnson & Johnson’s COVID-19 vaccine, despite a very rare risk of blood clots,” the AP reports. “Out of nearly 8 million people vaccinated before the U.S. suspended J&J’s shot, health officials uncovered 15 cases of a highly unusual kind of blood clot, three of them fatal.”

Sen. Joe Manchin said President Joe Biden and Congress should focus on “conventional” infrastructure projects like roadways and bridges, in another sign of building sentiment to split up the administration’s expansive $2.25 trillion plan, Bloomberg reports.

“A bipartisan group of House lawmakers endorsed raising the gasoline tax to pay for infrastructure spending, lending support to a measure that both Republican and Democratic proposals have avoided in the debate about how to cover the cost of an infrastructure package,” the Wall Street Journal reports.

“The group of 58 lawmakers, dubbed the Problem Solvers Caucus, proposed indexing gas and diesel taxes to inflation, highway construction costs, fuel-economy standards, or some combination of the three in a report on infrastructure released Friday.”

Associated Press: “The dwindling demand for vaccines illustrates the challenge that the U.S. faces in trying to conquer the pandemic while at the same time dealing with the optics of tens of thousands of doses sitting on shelves when countries like India and Brazil are in the midst of full-blown medical emergencies.”

“More than half of American adults have received at least one vaccine dose, and President Joe Biden this week celebrated eclipsing 200 million doses administered in his first 100 days in office. He also acknowledged entering a new phase to bolster outreach and overcome hesitancy.”

Sen. Ron Johnson (R-WI) declared that he sees “no reason to be pushing vaccines on people,” arguing their distribution should be “limited” to those most vulnerable to coronavirus, and asking, “if you have a vaccine, quite honestly, what do you care if your neighbor has one or not?,” Forbes reports.

Johnson said he is “getting highly suspicious” of the “big push to make sure everybody gets the vaccine,” stating it’s “not a fully approved vaccine.”

NPR: “As Israel raced forward this winter and spring with its world-leading COVID-19 vaccination campaign, it waged an aggressive and largely successful campaign to confront false rumors and hesitancy about the COVID-19 vaccine among devout ultra-Orthodox and Hasidic Jewish communities, among the hardest hit by the virus in Israel.”

“Today, more than half of all Israelis have been vaccinated — including 80% of ultra-Orthodox adults over age 30, the health ministry says.”

“Washington’s history of backing out or failing to ratify climate commitments now jeopardizes widespread support for Biden’s just-announced plans to cut U.S. carbon dioxide output between 50 and 52 percent by 2030, compared with 2005 levels. Surface-level positive feelings from foreign leaders toward Biden belies fundamental tensions around how both the U.S. and its allies and competitors can achieve such cuts, and who should pay.”

“Secretary of State Antony Blinken has issued a blanket authorization for U.S. diplomatic outposts around the world to fly the Pride flag on the same flagpole as the U.S. flag at their embassy or consulate showcasing support for LGBTQ rights,” Foreign Policy reports.

“Federal authorities are looking into whether a 2018 trip to the Bahamas involving Republican Congressman Matt Gaetz and several young women was part of an orchestrated effort to illegally influence Gaetz in the area of medical marijuana,” CNN reports.

“Prosecutors with the Justice Department’s Public Integrity Section are examining whether Gaetz took gifts, including travel and paid escorts, in exchange for political favors.”

“The pick is a big deal in the post-Trump GOP as Republicans navigate what the future of the party will look like. Scott, the only Black Republican in the Senate, is widely seen as a rising star in the party who is well-liked by pro-Trump Republicans as well more moderate members.”

“Jailed Russian opposition leader Alexei Navalny said Friday that he’s ending his three-week hunger strike, one day after his doctors pleaded for him to do so to preserve his life,” Axios reports.

“Two close associates of Alexei Navalny were detained Wednesday ahead of protests planned to support the imprisoned Russian opposition leader, who has been on a hunger strike since March 31,” the AP reports. “Navalny’s team called Sunday for nationwide protests after reports about the politician’s health deteriorating in prison. Russian authorities have stressed that the demonstrations were not authorized and warned against participating in them.”

Anne Applebaum in The Atlantic:  “When Alexei Navalny boarded a plane to Moscow on January 17, he turned his life into a metaphor. He knew it, his wife knew it, and everybody else on the plane knew it. So did the millions of people who had watched his documentary videos, who had seen the witty interviews he did on the plane, who have since joined demonstrations in his name. So did the leaders of Russia, including the country’s dictator and president, Vladimir Putin. This, Navalny was telling all of them, is what courage looks like.”

“The number of scientists who emigrate from Russia every year has increased five-fold since President Putin returned to the presidency in 2012,” the Times of London reports.

Said Nikolai Dolgushkin, an official at the country’s Academy of Sciences: “Russia is the only developed country where the number of scientists has been decreasing for several decades in a row.”

“The top Republican in the House of Representative thinks a special commission appointed to investigate the Jan. 6 attack on the U.S. Capitol should also look at unrelated riots during the previous year,” the HuffPost reports.

Said House Minority Leader Kevin McCarthy (R-CA): “I think if you’re going to have a commission, you should look at the whole broad spectrum. We just went through a whole summer of riots throughout the city.”

Russia will quit the International Space Station in 2025, marking the end of one of its few successful areas of cooperation with the West, the Financial Times reports.

“President Joe Biden will embark on his first overseas trip in office in June, the White House is set to announce Friday, with the aim of demonstrating his administration’s commitment to the transatlantic alliance and reengagement with key allies,” the AP reports.

“President Joe Biden is returning to Georgia on Thursday to celebrate his first 100 days in office, marking the moment in a state where Democratic victories allowed him to pursue a far more ambitious legislative agenda,” the Atlanta Journal Constitution reports.

The Guardian: “The country has descended into a tragedy of unprecedented proportions. Almost 1.6 million cases have been registered in a week, bringing total cases to more than 15 million. In the space of just 12 days, the Covid positivity rate doubled to 17%, while in Delhi it hit 30%. Hospitals across the country have filled to capacity but this time it is predominately the young taking up the beds; in Delhi, 65% of cases are under 40 years old.”

“While the unprecedented spread of the virus has been partly blamed on a more contagious variant that has emerged in India, Modi’s government has also been accused of failures of political leadership from the top, with lax attitudes emulated by state and local leaders from all parties and even health officials across the country, which led many to falsely believe in recent months that India had defeated Covid.”

Bloomberg: “Bodies piling up at crematoriums and burial grounds across India are sparking concerns that the death toll from a ferocious new Covid-19 wave may be much higher than official records, underplaying the scale of a resurgence that is overwhelming the country’s medical system.”

Reuters reports that hospitals in northern and western India, including the capital, New Delhi, were full and running out of oxygen.

Japanese Prime Minister Yoshihide Suga “wants to make a decision as soon as this week on whether to declare a state of emergency in Tokyo, Osaka and other areas, and ramp up restrictions to contain a surge in coronavirus cases just three months before the start of the delayed Olympics,” the Japan Times reports.

Dahlia Lithwick: “A progressive left that often sleepwalked through the Merrick Garland blockade and had no idea how to message the judiciary in 2016 is now wide awake and furious. New progressive groups are pushing a debate about the courts that lived for years only on academic panels. Liberals who were outraged about the norm-busting hardball around Garland, Kavanaugh, and Barrett, are not in fact waiting around for an adverse abortion or guns decision.”

“They are energized about court reform right now and they aren’t waiting for radical decisions to demand change.”

Washington Post: “The hearing featuring Judge Ketanji Brown Jackson, who is up for the influential U.S. Court of Appeals for the D.C. Circuit, could be a preview of what she would face if she is eventually nominated for a potential vacancy on the Supreme Court.”

NPR: “Democratic members of the House and Senate Judiciary committees are asking U.S. Supreme Court Justice Amy Coney Barrett to recuse herself from participating in a case involving a conservative nonprofit with ties to a group that gave at least $1 million to fund a ‘national campaign’ to win Senate confirmation of her Supreme Court nomination.”

New York Times: “That Cheney was willing to face Trump’s wrath called attention to the fact that most of them were not — a factor in the aggrievement directed at Cheney in the meeting.”

“Lloyd Smucker of Pennsylvania said that Cheney had ‘a low E.Q.,’ or emotional quotient.” Said one GOP congressman: “I just got to spend four hours listening to a bunch of men complain to a woman that she doesn’t take their emotions into account.”

“You look up into the stands and see your girlfriend on the opposition’s side — that’s one hell of a tough thing to swallow.”— Rep. Mike Kelly (R-PA), quoted by the New York Times, on Rep. Liz Cheney (R-WY) supporting the impeachment of Donald Trump.

Washington Post: “The Trump administration put up bureaucratic obstacles that stalled approximately $20 billion in hurricane relief for Puerto Rico and then obstructed an investigation into the holdup, according to an inspector general report.”

David Brooks: “What’s happening can only be called a venomous panic attack. Since the election, large swathes of the Trumpian right have decided America is facing a crisis like never before and they are the small army of warriors fighting with Alamo-level desperation to ensure the survival of the country as they conceive it.”

“This level of catastrophism, nearly despair, has fed into an amped-up warrior mentality.”

“I can tell a story in which the Trumpians self-marginalize or exhaust themselves. Permanent catastrophism is hard. But apocalyptic pessimism has a tendency to deteriorate into nihilism, and people eventually turn to the strong man to salve the darkness and chaos inside themselves.”

Michael Strain: “Hawley, Cruz and other GOP politicians will likely find that their Trumpian style appeals to their party’s base, which remains enamored of the former president. But this style likely won’t appeal far outside it. These politicians seem to think they have the numbers on their side, representing ‘the people’ against a much smaller number of “elites.” They don’t. There is no silent majority.

“And the politics they are practicing is going to be less successful after years of rising wages than it was in 2016. The unemployment rate is currently 6%, and 2021 is going to see record-setting employment growth.”

“Populism peters out as incomes grow. The sooner Republicans realize this, the better.”