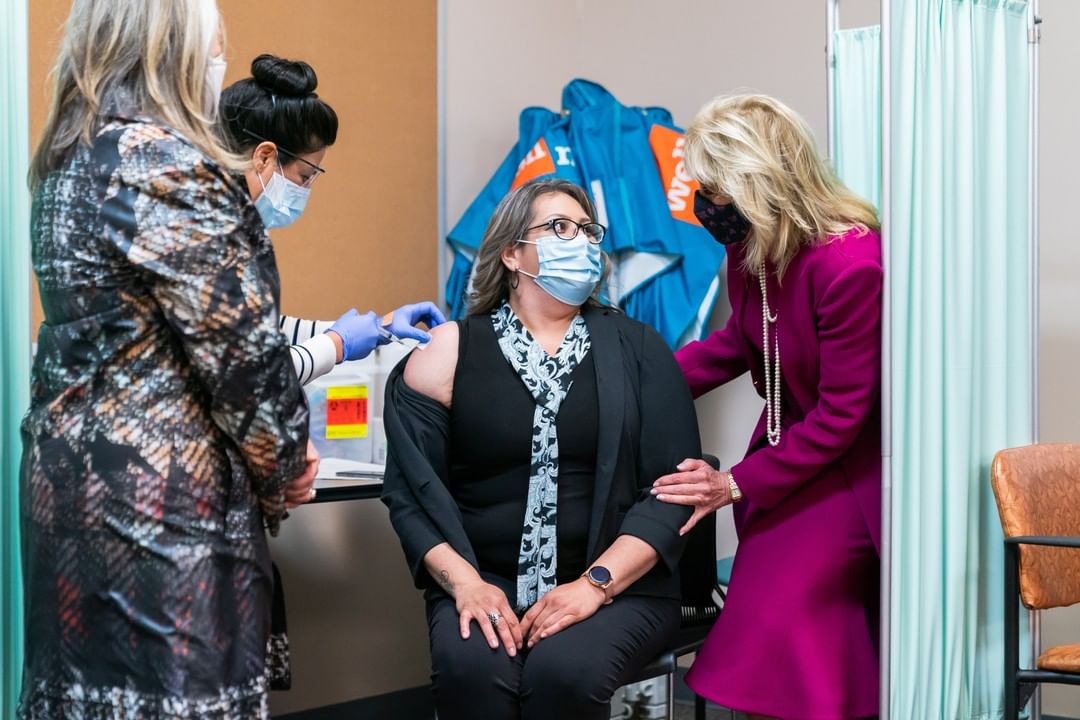 “The next phase of President Biden’s $4 trillion push to overhaul the American economy will raise taxes on millionaire investors to fund education and other spending plans, but it will not take steps to expand health coverage or reduce prescription drug prices,” the New York Times reports.

“Administration officials had planned to include a health care expansion of up to $700 billion, offset by efforts to reduce government spending on prescription drugs. But they have decided to instead pursue health care as a separate initiative.”

“All of the tax provisions would keep with Mr. Biden’s campaign promise not to raise taxes on individuals or households earning less than $400,000 a year.”

Bloomberg: “President Joe Biden will propose almost doubling the capital gains tax rate for wealthy individuals to 39.6%, which, coupled with an existing surtax on investment income, means that federal tax rates for investors could be as high as 43.4%, according to people familiar with the proposal.”

The House has passed the bill to make the District of Columbia the 51st US state, in a vote of 216 to 208. The vote fell exactly along party lines with all House Democrats supporting the bill.

“Senate Republicans on Wednesday signaled they might oppose any future increase to the debt ceiling unless Congress also couples it with comparable federal spending cuts, raising the specter of a political showdown between GOP leaders and the White House this summer,” the Washington Post reports.

“Republican lawmakers staked their position after a private gathering to consider the conference’s operating rules this session, issuing what GOP leaders described later as an important yet symbolic statement in response to the large-scale spending increases proposed by President Biden in recent months.”

It’s almost like Republicans are daring Democrats to abolish the filibuster.

Jonathan Bernstein: “Here comes the stupidest debate in Washington again. Yup: It’s the debt limit, which will need to be raised sometime this summer or fall.”

“Everything about this process is pointless. To be sure, there are legitimate arguments to be had over federal budget deficits, and about specific government expenditures and tax measures. The debt limit itself, however, has no place in those arguments. Nothing would change if there was no statutory ceiling on government borrowing. Policies would still produce the deficits, balance or surplus that Congress intended, and those totals would likely be exactly the same as they are now. All the debt limit does is require a vote that no one wants to take and create the unlikely but real possibility that the U.S. could default — a possibility so disastrous that it causes a drag on the entire economy.”

“In short, the debt limit should be abolished. Unfortunately, the politics involved have only become worse over time. It’s always been fairly normal for the out-party to vote against raising the limit, forcing the majority to supply the votes. Majorities have, in the past, fought back by attaching increased funding to some popular program, forcing the minority to either support lifting the ceiling or look bad for opposing something constituents want. A stupid piece of political theater on both sides, but mostly harmless.”

The Senate passed with a wide bipartisan majority Thursday a bill denouncing discrimination against Asian communities in the United States, CNN reports.

The vote was 94-1. The lone vote in opposition was from Sen. Josh Hawley (R-MO).

“If there’s a dubious spotlight, you can bet Josh Hawley will do anything to be standing in the middle of it.”

Green That Life: Here’s what you can do right now.

Politico: “The Pentagon has briefed top lawmakers on intelligence surrounding suspected directed-energy attacks against U.S. troops, and officials identified Russia as a likely culprit… The Defense Department had been investigating the incidents, including those targeting its personnel around the world, since last year, according to four former national security officials directly involved in the probe.”

“Pentagon officials informed at least two key groups of lawmakers earlier this year, in written form and in-person, about the investigation… The briefings included information about injuries sustained by U.S. troops in Syria.”

The top US military official who runs the American nuclear arsenal warned that China and Russia are modernizing their nuclear weapons and capabilities faster than the US, saying during a congressional hearing on Tuesday that if it does not start investing more in nuclear defense and infrastructure, the US will be “at risk of losing credibility in the eyes of our adversaries,” CNN reports.

When Derek Chauvin was led out of the Hennepin County Courthouse in handcuffs after being convicted of all three counts in the murder of George Floyd, the former cop was taken to Minnesota’s only maximum-security prison to await sentencing. Shortly after arriving at the Minnesota Correctional Facility–Oak Park Heights at 5 p.m. on Tuesday, he was placed in solitary confinement for 23 hours a day.

Washington Post: “About 3 million Americans are getting vaccinated daily, an 11 percent decrease in the seven-day average of daily shots administered over the past week. The unprecedented drop is rivaled only by a brief falloff that occurred in February, when winter storms forced the closure of vaccination sites and delayed shipments nationwide.”

Sen. Rand Paul (R-KY) to Fox News: “If you want more people to get vaccinated, Joe Biden should go on national TV, take his mask off and burn it.”  He added: “Light a torch to it and burn his mask and say, ‘I’ve had the vaccine, I am now safe from this plague. If you get the vaccine, you can be safe, too.’”  It’s worth noting that Rand Paul has refused to get vaccinated himself. And it is also worth noting that he is a fucking idiot. Masks prevent the transmission of the virus. I haven’t gotten my yearly cold or flu, nor any season allergies, since the Pandemic started and I began wearing a mask.

The Tennessee House of Representatives passed a bill banning state and local governments from requiring COVID-19 vaccines, The Hill reports.

“Federal health authorities are leaning toward recommending that use of the Johnson & Johnson coronavirus vaccine resume, possibly as soon as this weekend — a move that would include a new warning about a rare complication involving blood clots but probably not call for age restrictions,” the Washington Post reports.

“It is easy to feel as if the coronavirus pandemic is getting out of control again. The rate of new cases hit a record last week, with 5.2m people around the world getting infected,” the Financial Times reports.

“An FT analysis of data from five countries — each facing very different scenarios — finds that rates of infections, hospitalization and death have traced a lower path among the older, most vaccinated age groups than among younger cohorts, who are least likely to have received the jab. This is regardless of the viral caseload — whether infections are rising or falling, or if a country is grappling with one of the new variants.”

The House and Senate could override the governor’s veto with two-thirds majority votes. The House passed the bill with a veto-proof majority; the Senate did not.

“More than a century after the Ottoman Empire’s killing of an estimated 1.5 million Armenian civilians, President Biden is preparing to declare that the atrocities were an act of genocide,” the New York Times reports.

“The action would signal that the American commitment to human rights outweighs the risk of further fraying the U.S. alliance with Turkey.”

“Senior Senate Republicans offered a $568 billion counter to President Joe Biden’s $2.25 trillion jobs package Thursday, one that’s focused on more traditional infrastructure like roads and bridges and doesn’t have the corporate tax hikes that Democrats are seeking,” Bloomberg reports.Although it would need to attract 60 votes to overcome the Senate filibuster, the bill has just five Republican co-sponsors.

“Democrats have spent months touting an expansive proposal that would reshape U.S. elections. But with the bill’s Senate prospects growing more dire, key members of the Congressional Black Caucus are pushing to narrow their strategy,” Politico reports.

“The massive election reform measure known as H.R. 1 passed the House last month, but it has yet to win unified support from the 50-member Senate Democratic caucus amid a fierce GOP pushback effort that casts it as an aggressive consolidation of political power. With that Senate logjam in mind, a group of Black Democrats is pressing to elevate a more targeted voting rights bill — named for and championed by the late Rep. John Lewis — that they believe could be a more successful sell on Capitol Hill.”

“Senate Republicans are on track to affirm their decade-long earmarks ban on Wednesday, an effective rebuke of their House counterparts that upholds a central tenet of the fiscal conservatism the GOP abandoned under Donald Trump,” Politico reports.

“The largely symbolic decision, keeping the party on track with tea party-era attitudes toward spending, would come after a majority of House Republicans voted in a secret ballot to back Democrats’ return to earmarking, with extra guardrails.”

“Sen. Richard Shelby (R-AL), the top-ranking Republican on the appropriations committee, said after Wednesday’s meeting that GOP senators ‘absolutely’ could ask for earmarks now, despite the ban technically remaining in place as part of the conference rules,” the Wall Street Journal reports.

Said Shelby: “If you don’t want to earmark, don’t ask for one. Even if you ask for one you might not get one because the old earmark days, they’re gone.”

Others that will ignore the ban: Sen. Susan Collins (R-ME) and Sen. Mike Rounds (R-SD).

Jonathan Bernstein: “On the one hand, legalizing marijuana now polls well, which must make it tempting for Biden to jump to the front of the parade. But if he did so, public opinion would likely polarize by party, with Republicans who are now inclined toward legalization switching to opposition.”

“That’s simply the context of any policy question during this era of strong partisan polarization; if the president takes a position, public opinion will strongly tend to reshuffle, with voters in the president’s party supporting whatever it is and voters in the out-party doing the opposite.”