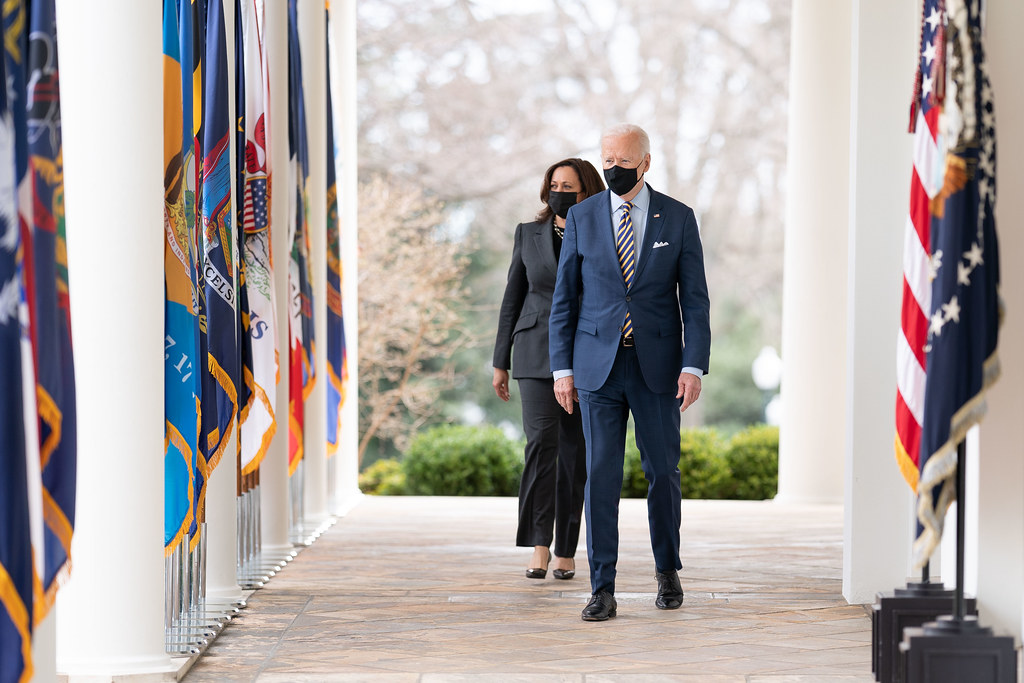 “Attorney General Merrick Garland is expected to announce that the Justice Department is opening a sweeping investigation into policing practices in Minneapolis a day after a former officer was convicted in the killing of George Floyd,” the Associated Press reports.

“The Justice Department is already investigating whether Chauvin and the other officers involved in Floyd’s death violated his civil rights. The investigation being announced Wednesday is known as a ‘pattern or practice’ and will be a more sweeping probe of the entire department and may result in major changes to policing there.”

“Democrats argue that the GOP plan to spend fewer than $1 trillion and focus on brick and mortar infrastructure is a non-starter and is not the basis for bipartisan negotiations.”

Politico: “The U.S. officials have a lot of ground to make up after years of the federal inaction, and Biden has pushed his team led by John Kerry and national climate adviser Gina McCarthy to move quickly by organizing the global summit less than 100 days into his tenure. That scramble has left a lot of questions circulating about exactly what to expect from the speeches from the 40 nations invited to participate in the virtual event Thursday and Friday.”

“The Biden administration is moving to end a legal battle with California over the state’s authority to regulate motor-vehicle emissions, setting the stage for stricter regulations on the auto industry,” the Wall Street Journal reports.

“Administration officials could announce their first steps as early as Friday, these people said, as President Biden concludes a two-day international summit via videoconference to address climate change. It would be the latest in a series of efforts to unwind Trump administration policies that eased environmental rules.”

The U.S. will probably run out of adults who are enthusiastic about getting vaccinated within the next two to four weeks, according to a new KFF analysis.

Meanwhile, the Washington Post reports Republicans who say they don’t want to get the vaccine are becoming only more resistant.

Bloomberg: “President Joe Biden called on employers to use a tax credit to provide paid time off to workers to get vaccinated and for businesses to do more to boost the inoculation effort as the U.S. seeks to get shots in more arms.”

Time: “Officials have said that when it comes to persuasion, they have to make sure their efforts won’t exacerbate skepticism. Their strategy largely hinges on channelling talking points and funding to community leaders who they hope will have more sway with many Americans than the federal government.”

Said White House Press Secretary Jen Psaki: “We recognize that the President, that all of us, may not be exactly the right messengers for some of these audiences.”

Sen. Tim Scott (R-SC) told reporters he plans to reintroduce his police reform bill or a similar proposal in the coming weeks, and that he has discussed a potential compromise with Rep. Karen Bass (D-CA) and Sen. Cory Booker (D-NJ), Axios reports.

Playbook: “So we told you this morning that when it comes to policing reform, even advocates are privately skeptical that they can get something passed. That’s namely due to the huge differences between Rs and Ds on the issue of qualified immunity, protection that bars cops from getting sued. But this morning, several Republican senators sounded optimistic that a deal could be struck.”

Rep. Val Demings (D-FL) and Rep. Jim Jordan (R-OH) got in a screaming match during a House Judiciary Committee hearing after Jordan suggested that Demings — a former police officer — was using the police as political pawns.

Wall Street Journal: “Brazil’s government, widely criticized by environmental groups as a negligent steward of the Amazon rainforest, has made an audacious offer to the Biden administration: Provide $1 billion and President Jair Bolsonaro’s administration will reduce deforestation by 40%.”

“Supported by some influential scholars and Amazon dwellers, Mr. Bolsonaro argues that the only way to save the jungle is through carbon credits and by financing sustainable economic activities… The request is likely just among the first of many similar to follow as developing nations start to negotiate with industrialized countries about who pays for costly programs to address climate change.”

“A Capitol Police official radioed units outside of the building on the morning of Jan. 6 and told them only to scout for anti-Trump troublemakers — not pro-Trump protesters, according to the findings of an internal investigation revealed at a public hearing by Rep. Zoe Lofgren,” Politico reports.

This would probably need to be an official senior enough to send out this kind of a communication to officers in the field.

“The chief federal watchdog for the Secret Service blocked investigations proposed by career staff last year to scrutinize the agency’s handling of the George Floyd protests in Lafayette Square and the spread of the coronavirus in its ranks,” the Washington Post reports.

“Both matters involved decisions by then-President Donald Trump that may have affected actions by the agency.”

“Vice President Kamala Harris was on hand in case she was needed for a 50-50 tie on the procedural vote for Gupta’s nomination Wednesday that fell strictly along party lines, but Sen. Lisa Murkowski, a moderate Republican from Alaska, broke with her Republican colleagues and joined all Democratic senators to advance the nomination 51-49.”

“Consumers around the world have stockpiled an extra $5.4 trillion of savings since the coronavirus pandemic began and are becoming increasingly confident about the economic outlook, paving the way for a strong rebound in spending as businesses reopen,” the Financial Times reports.  “And booming global consumer confidence suggests shoppers will be willing to spend again as soon as shops, bars and restaurants reopen when restrictions to control the spread of the virus are eased.”

“Avoiding an escalation of conservative attacks against President Joe Biden’s immigration policies was one of the factors the White House considered when it initially decided to keep his predecessor’s controversial cap on refugees,” Politico reports.

Washington Post: “President Biden overruled his top foreign policy and national security aides, including Secretary of State Antony Blinken, when he kept in place the Trump administration’s record low cap… Biden harbored concerns about what the sharp increase in migrants at the southern border meant for the government’s capacity to handle an influx of refugees from elsewhere.”

“In the end, the president’s own misgivings fueled the decision more than anything else… The president was particularly frustrated by the government’s struggle to deal with unaccompanied minors at the border and became increasingly concerned about the Office of Refugee Resettlement’s response to the crisis.”

“It’s not exactly my vision… but, you know, I’m just an old guy they put out to pasture.”  — Former President George W. Bush, in an interview on the Today Show, lamenting how the Republican Party has become increasingly “isolationist, protectionist, and to a certain extent, nativist.”

Politico: “Biden left the impression that it would not just be a portion of his upcoming address to a joint session of Congress, but that he’d support moving immigration measures through budget rules allowing a simple majority vote in the Senate.”

Without details, it’s not at all clear how this would be allowed by the Senate Parliamentarian.

“President Biden this week will pledge to slash U.S. greenhouse gas emissions at least in half by the end of the decade, as part of an aggressive push to combat climate change at home and convince other major economies around the world to follow suit,” the Washington Post reports.

Green That Life: Why protecting the environment is more important than ever.

Michael Grunwald: “It’s often said in Washington that personnel is policy, and it would be hard for the president not to push the climate envelope after hiring so many envelope-pushers. If Biden has recruited the climate equivalent of America’s 1992 Olympic ‘Dream Team’ — as Ali Zaidi, McCarthy’s deputy, describes it — his Michael Jordans and Charles Barkleys will all expect to hoop.”

“There just isn’t much subtlety about the Biden team’s enthusiasm for climate action… Team members say their meetings are a bit surreal — not only because they’re all virtual, but because the participants all understand without ever saying so explicitly that their goal is decarbonizing the country… To Washington Republicans, all this unabashed green cheerleading reflects a liberal government stocked with radical ideologues by a supposedly moderate president.”

“Angela Merkel’s conservative alliance fell behind the Greens to its lowest poll rating on record yesterday, hours after naming its candidate to succeed her as chancellor of Germany,” the Times of London reports.

“The Greens seized a seven-point lead as voters appeared to recoil from the centre right’s new figurehead, Armin Laschet.”

“The swing away from Merkel’s Christian Democratic Union and its Bavarian affiliate, which are jointly known as the Union, is one of the sharpest in modern German history.”

“China’s President Xi Jinping will attend a U.S.-led climate change summit on Thursday at the invitation of President Joe Biden, in the first meeting between the two leaders since the advent of the new U.S. administration,” NBC News reports.

“Biden has invited dozens of world leaders to join the two-day virtual summit, which starts Thursday, since bringing the United States back into the 2015 Paris Agreement on cutting global carbon emissions.”

“With his mandate to form a government due to expire in two weeks, and his rivals’ efforts to form an alternative coalition gaining momentum, Netanyahu has a new strategy: changing the election rules,” Axios reports.

“In an attempt to prevent the mandate from passing to his rivals, Netanyahu floated an initiative to change the entire Israeli electoral system.”

“His new bill calls for direct elections only for the prime minister’s post, to be held in 30 days.”

New York Times: “The [Republican anti-protest] measures are part of a wave of new anti-protest legislation, sponsored and supported by Republicans, in the 11 months since Black Lives Matter protests swept the country following the death of George Floyd. The Minneapolis police officer who killed Mr. Floyd, Derek Chauvin, was convicted on Tuesday on murder and manslaughter charges, a cathartic end to weeks of tension.”

“But while Democrats seized on Mr. Floyd’s death last May to highlight racism in policing and other forms of social injustice, Republicans responded to a summer of protests by proposing a raft of punitive new measures governing the right to lawfully assemble. G.O.P. lawmakers in 34 states have introduced 81 anti-protest bills during the 2021 legislative session — more than twice as many proposals as in any other year.”

Rep. Marjorie Taylor Greene (R-GA) tweeted that the lack of riots in the streets of Washington, D.C. on Tuesday night after Derek Chauvin was found guilty of murdering George Floyd was somehow evidence that Black Lives Matter “is the strongest terrorist threat in our country.”

Meanwhile, Tucker Carlson claimed that last summer’s protests “intimidated” the Chauvin jury into guilty verdict, according to the Washington Post.