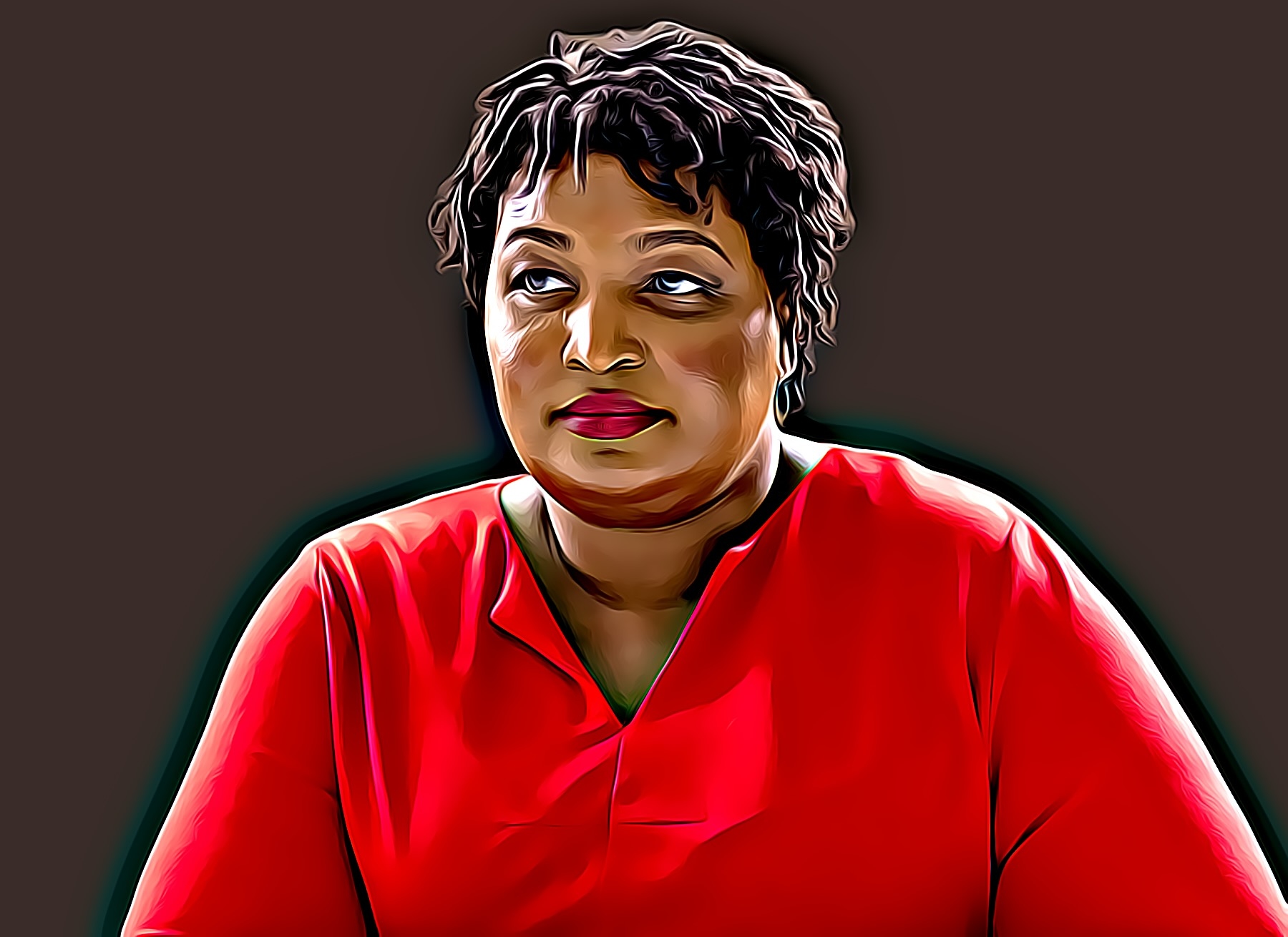 Axios/Ipsos Poll: “Most Americans support the pause in distribution of the Johnson & Johnson COVID-19 vaccine, and so far there’s no evidence that it’s leading to broader vaccine hesitancy.”

“Republicans were almost as likely to support the pause as Democrats, an indication this issue hasn’t been politicized.”

Abrams then listed and succinctly explained six different provisions before being interrupted and forced to stop by Kennedy.

CONFLICTING POLLS ON SUPREME COURT EXPANSION — A new Morning Consult poll finds 46% of Americans prefer to keep the Supreme Court at nine seats, with only 26% saying they would support expanding the bench. Equally noteworthy: these numbers are essentially unchanged since their last survey on the issue in October of 2020.

But… Michael Albertus and Guy Grossman: “Our research finds a majority of Americans would not oppose a court expansion scheme like the one president Franklin D. Roosevelt proposed but failed to enact. Indeed, a noteworthy minority would actively support it.”

“One of our strongest findings is that few respondents wanted to punish an incumbent who reshapes the court for partisan ends. This finding is consistent with past research that shows many American voters support empowering popularly elected officials, even at the expense of checks and balances and other features of liberal democracy.”

NEW YORK GOVERNOR — Andrew Giuliani told CNN he is set to meet with former President Trump next week in Florida as he mulls a gubernatorial bid in New York. LOL.

NEBRASKA GOVERNOR — Republican state Sen. John Stinner said this week that running for governor is “not a serious consideration right now,” and while that’s not quite a no, he still sounds very unlikely to get in. The western Nebraska legislator said he was “just getting too old to play the game” and added that he doubted that a candidate from his section of the state could raise enough money or win enough votes to prevail.

State Chamber of Commerce President Bryan Slone recently confirmed to Politico that he’s thinking about running to succeed his fellow Republican, termed-out Gov. Pete Ricketts. Slone faced Ricketts in the 2014 primary the last time this office was open but came in dead last in the six-person field with just 4% of the vote.

The only notable Republican currently in the race is University of Nebraska Regent Jim Pillen, though agribusinessman Charles Herbster filed fundraising paperwork back in November. And while Herbster has yet to make an announcement, Politico reports that plenty of Republicans expect that Trump will ultimately endorse his longtime ally. Herbster chaired Trump’s agriculture and rural advisory committee and donated over $1 million to Trump groups last year; he was also at the infamous Jan. 6 Trump rally that preceded the attack on the U.S. Capitol, though Herbster says he left before violence broke out.

ProPublica: “Two of the leading Republican firebrands in Congress touted big fundraising hauls as a show of grassroots support for their high-profile stands against accepting the 2020 election results.”

“But new financial disclosures show that Sen. Josh Hawley (R-MO) and Rep. Marjorie Taylor Greene (R-GA) relied on an email marketing vendor that takes as much as 80 cents on the dollar. That means their headline-grabbing numbers were more the product of expensively soliciting hardcore Republicans than an organic groundswell of far-reaching support.”

VIRGINIA GOVERNOR — Virginia state Sen. Amanda Chase (R), a prominent candidate for governor, said that the guilty verdict against former Minneapolis police officer Derek Chauvin this week made her “sick” and that jurors didn’t acquit because they feared a violent backlash, the Washington Post reports.

MARYLAND GOVERNOR / 6TH CD — A spokeswoman for wealthy Rep. David Trone recently told the Baltimore Sun that the congressman has been encouraged to run for the Democratic nomination for governor, though she did not give any other information about his deliberations.

While this appears to be the first time that Trone’s camp has publicly acknowledged that he could run to succeed termed-out Republican Gov. Larry Hogan, fellow Old Line State Democrats have known about his interest for some time. Former Del. Aruna Miller even began raising money in January to run for his House seat in the event that he seeks a promotion, and she had $224,000 on-hand at the end of March. Miller, who lost to Trone in the 2018 primary, has said she would not compete against him if he runs for re-election instead, though.

FLORIDA GOVERNOR / U.S. SENATOR — Democratic state Sen. Lauren Book’s colleagues selected her this week to lead the caucus for 2022-2024, a move that takes her out of the running for statewide office this cycle.

VIRGINIA ATTORNEY GENERAL — Incumbent Mark Herring maintained his financial advantage over Del. Jay Jones during the first quarter of 2021, but Jones, who has the endorsement of Gov. Ralph Northam, still has plenty of cash available to get his message out ahead of their June Democratic primary. Herring outraised Jones $646,000 to $498,000 during the opening three months of the year, and he ended March with a $1.39 million to $1 million cash-on-hand lead.

On the Republican side, Del. Jason Miyares led the four-person field with a far-smaller $236,000 raised and $341,000 on-hand. It’s possible, though, that the eventual GOP standard bearer will attract more donor attention after the party’s May 8 nominating convention.

GEORGIA U.S. SENATOR — Republican Rep. Buddy Carter confirmed to WGAU that he is thinking about giving up his safely red seat along the Georgia coast to challenge Democratic Sen. Raphael Warnock. Carter did not give a timeline for when he expects to decide, though two unnamed sources told the Atlanta Journal-Constitution the congressman was “nearing an announcement.”

OREGON GOVERNOR — The Oregonian recently took a look at the potential Democratic field to succeed termed-out Gov. Kate Brown, and several possible candidates did not rule out getting in.

Multnomah County Commission Chair Deborah Kafoury, state Treasurer Tobias Read, and Attorney General Ellen Rosenblum each merely said they were focused on their current jobs when asked if they were interested in running for governor. Rosenblum, who is not up for re-election until 2024, has retained her political consultant from last year and has hired a fundraising firm, which could indicate she’s thinking about seeking a promotion.

Labor Commissioner Val Hoyle also said, “My plan is to run for labor commissioner. That’s my current plan,” a response that’s also not a no. Conservative state Sen. Betsy Johnson is also a possibility, though there’s no word if she’s thinking about it. Johnson considered a 2016 bid as a member of the Independent Party but didn’t go forward with it, and she still remains a member of the Democratic caucus.

Two notable Democrats, though, did state they wouldn’t run. Meyer Memorial Trust chief investment officer Rukaiyah Adams said, “I’m not running for governor this time,” though she seemed very open to trying another cycle. Secretary of State Shemia Fagan, who was elected last year, also responded, “As I have said multiple times over the past year, I am not running for governor.”

ARKANSAS GOVERNOR — Former White House Press Secretary Sarah Huckabee Sanders reports raising $4.8 million during the first quarter of 2021, and the Trump-backed contender ended March with $3.9 million in the bank. Attorney General Leslie Rutledge, who announced her own bid for the Republican nomination in July of last year, took in $198,000 during the first three months of the year, and despite her head start, she had a far-smaller $1.06 million war chest at the close of the quarter.

NEW MEXICO GOVERNOR — Over the weekend, Sandoval County Commissioner Jay Block became the first notable Republican to announce a bid against Democratic Gov. Michelle Lujan Grisham. Block, who served with the Air Force in Afghanistan, highlighted his military background, but he also attacked Lujan Grisham’s performance during the pandemic. New Mexico recently became the first state to provide at least one vaccine dose to half its adult population, but that encouraging trend didn’t stop Block from arguing, “We want our freedoms back.”

Block currently has the field to himself, but state Rep. Rebecca Dow reiterated her interest in running last week. The Albuquerque Journal also reached out to state party chair Steve Pearce to ask if the former congressman was thinking about another campaign, and his spokesperson notably did not address his interest in his response. Pearce lost to Lujan Grisham 57-43 in 2018, a performance that, while better than his 61-39 drubbing against Tom Udall in the 2008 Senate race, probably won’t have many Republicans anxious for a rematch.