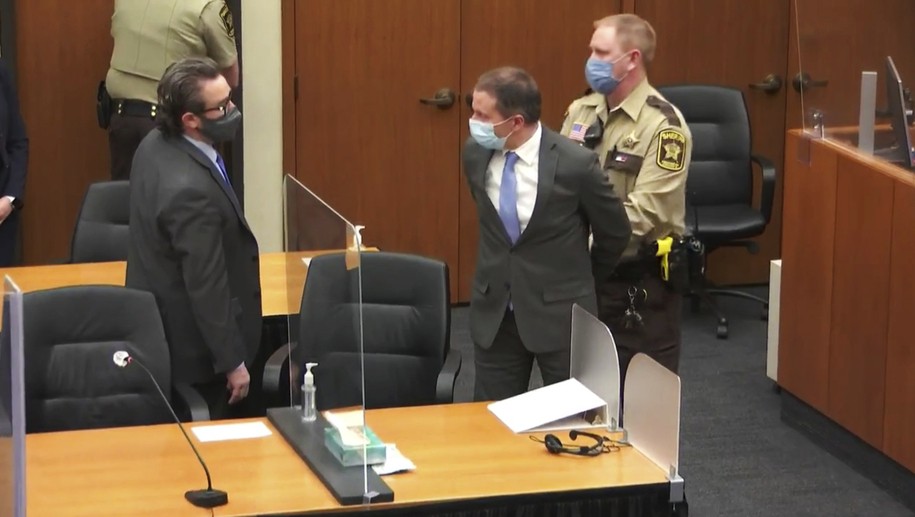 Former Minneapolis police officer Derek Chauvin was found guilty on all charges against him, Judge Peter Cahill announced on Tuesday. Chauvin was charged with second-degree murder, third-degree murder, and second-degree manslaughter after kneeling on the neck of 46-year-old George Floyd for more than nine minutes on May 25, 2020, outside of the Cup Foods corner store in Minneapolis.

Cheers could be heard outside the courthouse seconds after the verdict was read. “GUILTY! Painfully earned justice has finally arrived for George Floyd’s family,” attorney for the Floyd family Ben Crump said in a statement on social media. “This verdict is a turning point in history and sends a clear message on the need for accountability of law enforcement. Justice for Black America is justice for all of America!”

A lot of my friends here, black and white, are stunned by the verdicts. They are glad the right verdict was reached, but stunned that it actually happened. That they are stunned, even though the murder was captured on video, is a stunning indictment of our country. We expect injustice, especially when it comes to police and black people. Hopefully the verdicts starts changing that.

President Biden praised a guilty verdict in the murder trial of the former police officer Derek Chauvin, but called it a “too rare” step to deliver “basic accountability” for Black Americans who have been killed during interactions with the police, the New York Times reports.

Said Biden: “It was a murder in full light of day, and it ripped the blinders off for the whole world to see. For so many, it feels like it took all of that for the judicial system to deliver just basic accountability.”

The House rejected a Republican attempt to censure Rep. Maxine Waters for calling on protesters to “get more active” and “get more confrontational” if a jury votes to acquit former Minneapolis police officer Derek Chauvin in the killing of George Floyd, the Washington Post reports.

Washington Post: “President Biden asked congressional Republicans during a private meeting on Monday to present a counterproposal to his $2 trillion infrastructure plan by the middle of next month.”

“We’re gonna move forward rapidly. They have something to say? Now is the time to say it.”  — Sen. Bernie Sanders (I-VT), quoted by Politico, warning against spending lengthy amounts of time engaging and seeking compromise with Senate Republicans on infrastructure.

Sens. Mitt Romney (R-UT) and John Hoeven (R-ND) told President Biden they are opposed to increasing the corporate tax rate to pay for his proposed $2.25 trillion infrastructure package, Axios reports. “The opposition from Romney and Hoeven, the only two Republican senators in Monday’s bipartisan Oval Office meeting, suggests Biden is going to have a difficult time finding any Republican support to pay for his road, bridge and health care spending proposals by increasing corporate rates.”

Drawing red lines like this will convince Democrats to abandon bipartisanship pretty quickly.

“Republicans say President Biden’s $2.3 trillion infrastructure package will have a tough time getting through the Senate intact because of several key provisions that will open the legislation up to parliamentary challenges under the arcane Byrd Rule,” The Hill reports.

“GOP lawmakers plan to raise numerous procedural objections to the eventual bill, arguing that various elements violate the special budgetary rules Democrats plan to use to pass the measure in the 50-50 Senate with a simple-majority vote.”

Walter Mondale, who transformed the role of U.S. vice president while serving under Jimmy Carter and was the Democratic nominee for president in 1984, died Monday at 93, Axios reports.

Dan Balz: “It was Mondale’s political misfortune to run against Reagan. After weathering a deep recession, Reagan sought reelection during a time of rising economic growth and personal popularity. As his most famous campaign ad claimed, it was ‘morning in America.’ Mondale suffered the biggest electoral college loss of any candidate in history, losing 49 states and carrying only his home state of Minnesota — and that by only 4,000 votes. It was, as he would later recall, ‘a helluva shellacking.’”

“But that was hardly the summation of a rich life in politics and public service. Mondale’s legacy goes much deeper than that crushing defeat, most notably his contributions to the office of the vice presidency. Every vice president who has served since owes him a debt of gratitude for turning the role into something of value.”

“House Democratic leaders believe they’ve found a workaround to defuse weeks of delay tactics used by hard-line Republicans that have irked lawmakers in both parties and brought much of the chamber’s floor action to a halt,” Politico reports.

“The conservative firebrands have sought to make life difficult for Democrats in protest against what they say are efforts to shut out the minority party. But their tactics have made it virtually impossible for Democrats and Republicans to fast-track so-called suspension bills — noncontroversial measures that are critical to running the House — and instead created a legislative slog.”

Bloomberg: “Newly released Internal Revenue Service data show the politically lopsided impact of the $10,000 cap on deducting state and local taxes, or SALT — and why Democrats from the hardest-hit SALT states may be willing to cost Biden the crucial victory of passing his $2.25 trillion infrastructure and social services plan if he continues to insist on keeping Trump’s cap in place.”

“Former President Donald Trump’s unwillingness to pitch his voters on getting the jab has become the source of frustration for former aides, who lament the political benefits that would have come had he done so,” Politico reports.

Said one former official: “If he spent the last 90 days being the voice — and taking credit because he deserved to for the vaccine — and helping get as many Americans get vaccinated as he could, he would be remembered for that.”

The official added: “Honestly, I think if he was out on the road and celebrating his accomplishments and trying to get people vaccinated, he wouldn’t have been in the mindset that led to January 6.”

House GOP Conference Chair Liz Cheney (R-WY) said she did not invite former President Trump to address House Republicans at their policy retreat next week in Florida, The Hill reports.

Singer Ted Nugent, who has called COVID-19 “not a real pandemic” as well as a “scammy pandemic,” revealed in a video that he now has the virus, Marketwatch  reports. Said Nugent: “Everybody told me that I should not announce this, but I have had flu symptoms for the past 10 days. I thought I was dying. Just a clusterfuck.” He added: “My god, what a pain in the ass. I literally could hardly crawl out of bed the last few days.”

“Russia has been holding last-minute military exercises near commercial shipping lanes in the Black Sea that threaten to strangle Ukraine’s economy,” according to an internal document from Ukraine’s ministry of defense reviewed by Axios.

“With the eyes of the world on the massive buildup of troops in eastern Ukraine, the leaked memo shows Russian forces escalating their presence on all sides of the Ukrainian border.”

Wall Street Journal: “Russia has moved warplanes to Crimea and bases near Ukraine to an extent greater than has previously been disclosed, adding to its capability for political intimidation or military intervention, according to commercial satellite photos of areas being used for the military buildup.”

“The State Department said Monday that the U.S. ambassador to Russia, John Sullivan, will now be returning to the United States this week before returning to Moscow ‘in the coming weeks,’” Axios reports “The statement, from a State Department spokesperson, comes just hours after Axios reported that Sullivan had indicated he intended to stand his ground and stay in Russia after the Kremlin ‘advised’ him to return home to talk with his team.”

CNN: Sullivan returning to U.S. this week for “consultations.”

Rep. Steve Stivers (R-OH) announced that he plans to retire in May to accept a position as president and CEO of the Ohio Chamber of Commerce.  This could provide Speaker Nancy Pelosi with some wiggle room as the special election for fellow Ohio Rep. Marcia Fudge’s vacant seat won’t be held until November.

The reality is that it was the Republican party that was ready to turn the page on him.

Sen. Chuck Schumer (D-NY) acknowledged on the Senate floor “what you might call a very unofficial American holiday, 4/20.”

Said Schumer: “I believe the time has come to end the federal prohibition on marijuana in this country, and I’m working with Senators Booker and Wyden on legislation to do just that. My thinking on this issue has evolved.”

“Senators are closing in on an agreement to pass legislation to stem the rise in hate crimes against Asian Americans,” Politico reports.

“Senate Majority Leader Chuck Schumer announced Monday that the chamber would take up the bill this week and that two bipartisan amendments would be added. Senate sources said that a broader substitute amendment is on track with the hopes of passing the measure by the end of the week.”

“The same people who will tell you that they are against identity politics are the ones who are leading attacks based on identity and based on canceling out entire groups of people.”  — Virginia Delegate Danica Roem (D), quoted by the New York Times, on the rush in Republican-led state legislatures to pass legislation targeting transgender children and young adults.

“The Biden administration is considering requiring tobacco companies to reduce the nicotine levels in all cigarettes sold in the U.S. to levels at which they are no longer addictive,” the Wall Street Journal reports.

The Biden administration has ordered U.S. immigration enforcement agencies to stop using terms such as “alien,” “illegal alien” and “assimilation” when referring to immigrants in the United States, a rebuke of terms widely used under the Trump administration, the Washington Post reports.

Kevin Drum: “The bottom line, so to speak, is that in the past the business community stayed in its lane and didn’t worry much about the social conservative wing of the Republican Party. But now they feel like it’s out of control and bad for business.”

“Like it or not, big corporations have mostly adopted the vaguely liberal ‘responsible citizen’ attitude of the majority of Americans, namely that climate change is bad; diversity is good; mass killings are bad; immigration is good; trade wars are bad; trans people are good; and so forth. This is the corporate persona that they actively promote in their advertising, and they do it because their market research says this is what most people want.”

It’s starting to look like this rift is genuine, and it will have significant consequences in the long run. As Amy Walter points out, corporate America has become much more diverse, more educated, and more urban than the median Republican primary voter. The executive class may still be quite homogenous, but everyone else from managers on down looks like the rest of America. Maintaining internal political consensus within a company is important (baseball really doesn’t want to see its players strike), and that imperative will always bleed into external political considerations.