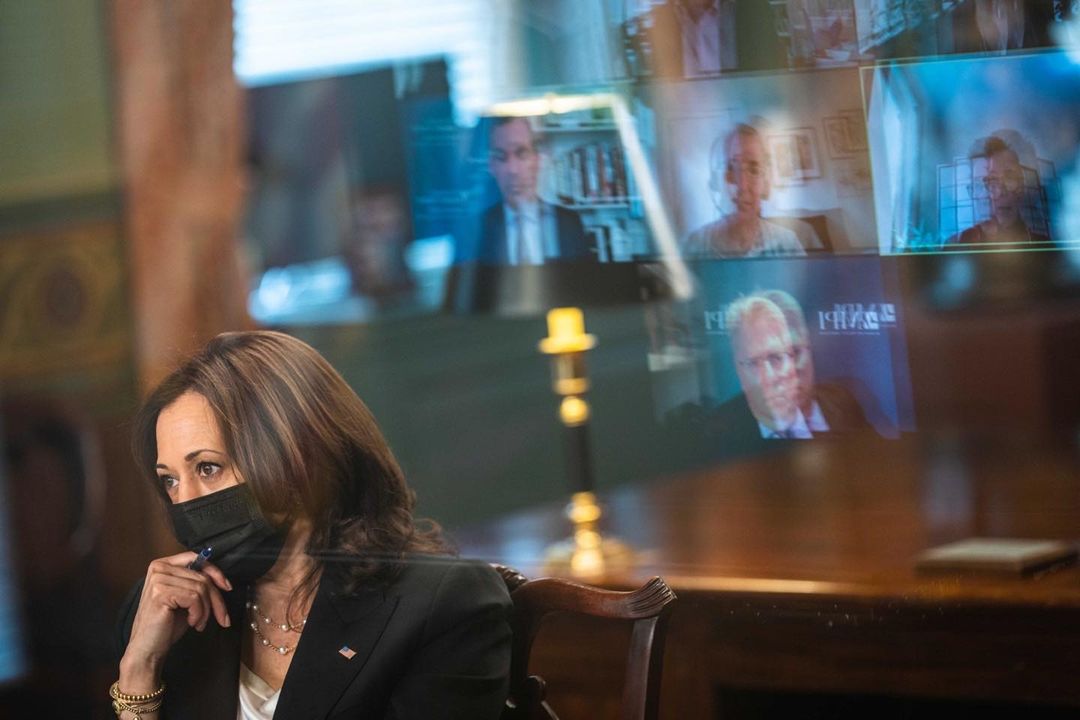 Biden got particularly high marks with regard to managing and distributing coronavirus vaccines. Seventy-two percent of Americans said his administration had done this well, including 55% of Republicans and independents who lean toward the GOP.

A new PBS NewsHour/NPR/Marist poll found that two-thirds of Americans are against laws that would limit transgender rights. That opposition includes majorities of every political ideology from liberal to conservative and every age group. Like they did with same-sex marriage, Americans have moved much faster towards acceptance than most GOP lawmakers.

A new Economist/YouGov poll found that the FDA recommendation to pause distribution of the Johnson & Johnson vaccine caused public confidence in the vaccine to sink 15 percentage points.

“It’s a break with former President Donald Trump, whose job rating remained mostly underwater during his presidency, even in his first 100 days on the job.”

“And one of the reasons why Biden is staying above water is that almost everything he’s deliberately tried to make part of his agenda during his honeymoon period is popular.”

GEORGIA GOVERNOR–“A former Democratic state legislator who switched parties after he endorsed Donald Trump is set to launch an insurgent challenge Friday against Republican Gov. Brian Kemp, setting the stage for a race that will test the former president’s influence in Georgia,” the Atlanta Journal-Constitution reports.

“Vernon Jones aims to tap into GOP anger at Kemp for resisting Trump’s demands to overturn Joe Biden’s narrow victory in Georgia in November, though his long record as an elected Democratic official seems certain to complicate his bid to win over Republican voters.”

Kemp was always going to have a tough re-election race, especially if Stacey Abrams runs again. This will only make it harder.

Rep. Katie Porter (D-CA), who represents an important swing district, raised $2.1 million in the first quarter of 2021 and has over $11.5 million in the bank, according to her FEC filings.

“The Democrat’s campaign said Thursday he raised more than $5.7 million from more than 101,000 supporters between Jan. 6 and March 31 – totaling what Warnock’s aides say is the highest off-year fundraising quarter in Georgia history. He ends the quarter with $5.6 million in the bank.”

Pfizer says it’s $2,500 campaign donation to Rep. Adrian Smith (R-NE) was made in error, the Daily Beast reports. From a statement: “We continue to stand by our decision to pause Pfizer PAC contributions to all 147 Members of Congress who voted against certifying the Electoral College results. The donation to Rep. Adrian Smith was made in error and has been cancelled.”

Sara Gideon (D), who lost her challenge to Sen. Susan Collins (R-ME) last November, still had $11.5 million in her campaign account on March 31, according to FEC filings.

OHIO U.S. SENATOR — “Kellyanne Conway, who served as campaign manager and counselor to former President Donald Trump, has been named a senior adviser to Ohio Senate hopeful Bernie Moreno, taking sides in a race that has become a fight over which GOP candidate is closest to the former president,” Politico reports.

J.D. Vance (R), author of Hillbilly Elegy, has told friends and colleagues that he plans to run for the U.S. Senate seat being vacated by Rob Portman (R-OH), Axios reports.

OH-Sen: Venture capitalist J.D. Vance, who last month said he’s “thinking very seriously” about joining the Republican primary for Ohio’s open Senate race, has reportedly told “friends and colleagues” that he’ll run, according to Axios. There’s no word on when he might announce a decision, though.

This suggests the GOP’s traditional anti-tax playbook to oppose the plan may not work this time.

FLORIDA GOVERNOR — Politico: “Major givers across the country are lining up to support the governor’s 2022 reelection effort, with some committing to hosting fundraising events and others plowing funds into his campaign bank account. In the past two-plus months alone, Ron DeSantis has received six-figure contributions from Republican megadonors including Bernie Marcus, Paul Tudor Jones and Steven Witkoff, who in March held a high-dollar fundraiser at his lavish Miami Beach home.”

“The surge of attention illustrates how the GOP donor class is beginning to look beyond former President Donald Trump. While the former president would almost certainly lock down vast donor support should he wage a 2024 comeback bid, the lack of clarity about his plans has opened the door for other would-be candidates to get a look.”

THE 50 STATE AND ALL DISTRICT STRATEGY WORKS — New York Times: “The president, who eked out a 12,000-vote victory in Georgia, received a small but potentially important boost from the state’s conservative areas if at least one local Democrat was running in a down-ballot race… That finding extended even to the state’s reddest districts.”

GEORGIA U.S. SENATOR — “Navy veteran Latham Saddler announced a challenge to U.S. Sen. Raphael Warnock on Thursday with hopes of emphasizing his military experience to appeal to conservatives in what’s likely to be a crowded Republican primary,” the Atlanta Journal Constitution reports.

NORTH CAROLINA U.S. SENATOR — An unnamed spokesperson for far-right Lt. Gov. Mark Robinson confirmed that he was thinking about getting in. Robinson had not shown any obvious interest in this race in the months since he was elected lieutenant governor until Wednesday, when a spokesperson (who curiously asked to not be publicly identified) told WRAL that Robinson was thinking about it. Dallas Woodhouse, the infamous former executive director of the state GOP, also wrote the previous day that Robinson “plans to announce his decision within days.”

Robinson has only been on the political scene for a short time. Robinson became a conservative celebrity in 2018 for a speech protesting the cancellation of a gun show in Greensboro, and he used that fame to defeat several more established Republicans in the 2020 primary.

Robinson then made news in the general election when he stood by his ugly old Facebook posts, which included anti-Semitic, Islamophobic, and transphobic screeds. However, that press didn’t stop Robinson from beating Democrat Yvonne Lewis Holley, who would have also been the first African American elected lieutenant governor, by a 52-48 margin.

Reports of Robinson’s interest in a promotion also drew a delighted reaction from one would-be candidate. While Rep. Dan Bishop didn’t rule out a Senate bid back in December, he responded to WRAL’s report by writing, “No more perfect candidate for this time. Bring it.”

MARYLAND GOVERNOR — How not to kick off a run for office: Just last week, former Prince George’s County Executive Rushern Baker announced that he’d once again seek the Democratic nomination for governor. “I’m running because I think we can do better,” he told Maryland Matters.

Flash forward to this week, however, when Baker told the Washington Informer that he was still considering a bid. The Informer reports that Baker “is contemplating running” and “still wavering,” adding that “no official announcement has been made.” For what it’s worth, the “Baker for Governor” Facebook page hasn’t been updated since 2018, when Baker last ran, and his website, rushernbaker.com, is unavailable.

Meanwhile, another big name seems to have taken himself out of the running for next year. WAMU reports that Rep. Anthony Brown, who was the Democrats’ unsuccessful gubernatorial nominee in 2014, says he plans to spend this term “and next” in Congress working on transit and infrastructure.

Turning to the Republican side, Harford County Executive Barry Glassman, who’d been considering a bid for governor and had also said he might challenge Republican Rep. Andy Harris in next year’s primary, will do neither. Instead, says Glassman, he’ll run for state comptroller, a position that’s open because the incumbent Democrat, Peter Franchot, is seeking the governorship.

But to say that history is against Glassman would be an extreme understatement: The last Republican to win a race for comptroller was Phillips Lee Goldsborough in 1898. In fact, no Maryland Republican has won a downballot statewide office since 1918, when Alexander Armstrong was elected attorney general. Goldsborough did, however, go on to serve as governor and later senator.

OREGON GOVERNOR — Sandy Mayor Stan Pulliam said this week that he’s forming an exploratory committee to consider a bid in next year’s open governor’s race. Willamette Week describes Sandy, a town of 11,000 people, as “one of Oregon’s fastest-growing cities, although still best known as a gateway to Mount Hood skiing and hiking.” If Pulliam does decide to run, he’d join 2016 nominee Bud Pierce in the Republican primary. A large number of prominent Democrats are also weighing the contest, though none have entered so far.

Businesswoman Jessica Gomez, the CEO of a company named Rogue Valley Microdevices, said this week that she was considering running for the Republican nomination for this open seat.

Monkey Cage: “To study voters, we define the working class as people without a college degree — which many journalists focus on — who are in the bottom half of the household income distribution — since many Americans who don’t finish college still go on to earn high salaries.”

“If we define the working class this way, there’s no real evidence the Trump era changed the demographic makeup of GOP voters.”