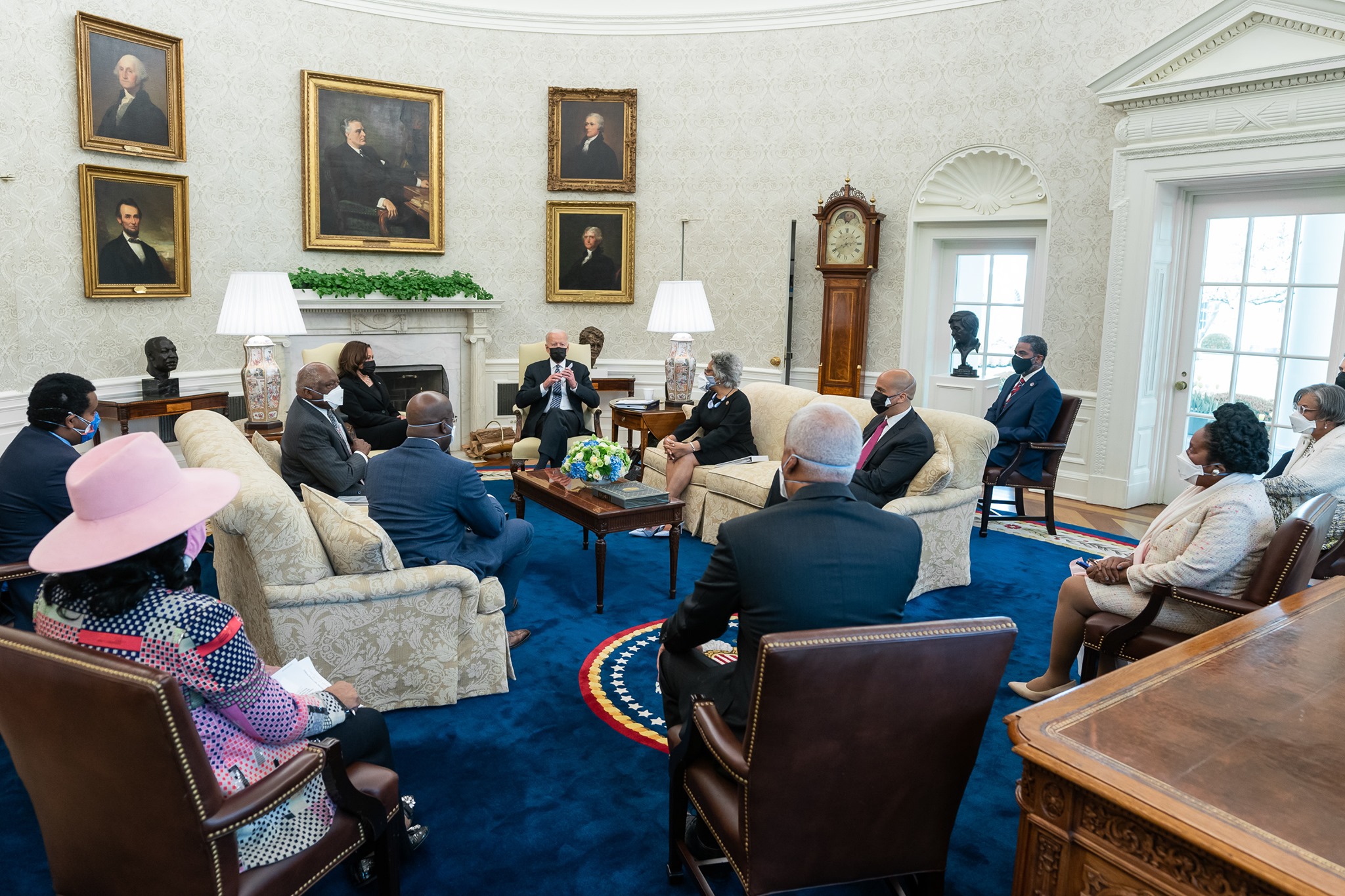 “The Biden administration announced it will sanction dozens of Russian officials and entities, expel 10 diplomats from the U.S., and set new restrictions on buying sovereign debt in response to the massive SolarWinds hack of federal agencies and interference in the 2020 election,” Axios reports.

“The sweeping acts of retaliation are aimed at imposing heavy economic costs on Russia, after years of sanctions that have failed to deter an increasingly aggressive and authoritarian President Vladimir Putin.”

Politico: “As Biden weighed a full exit from the country this spring, top military leaders advocated for keeping a small U.S. presence on the ground made up primarily of special operations forces and paramilitary advisers, arguing that a force of a few thousand troops was needed to keep the Taliban in check and prevent Afghanistan from once again becoming a haven for terrorists, according to nine former and current U.S. officials familiar with the discussions.”

“But in the end, Biden and his top national security deputies did what no previous president has done successfully — they overrode the brass. … [It] is Secretary of State Antony Blinken and national security adviser Jake Sullivan who are truly ‘running the Pentagon,’ according to two former officials familiar with the discussions.”

The U.S. Treasury Department said Thursday that Konstantin Kilimnik, an associate and ex-employee of Paul Manafort, “provided the Russian Intelligence Services with sensitive information on polling and campaign strategy,” during the 2016 election, Just Security reports.

It’s the first definitive statement from the U.S. government on the matter.

President Joe Biden has proposed a summit meeting with Vladimir Putin in a third country “in the coming months,” following a marked cooling of relations between Washington and Moscow, the Financial Times reports.

Meanwhile, Reuters reports Russia called the United States an adversary and told U.S. warships to stay well away from Crimea “for their own good.”

I’m willing to bet this goes a little differently than Donald Trump’s summit with Putin in Helsinki.

Wall Street Journal: “Democratic lawmakers plan to introduce legislation on Thursday that would add four seats to the Supreme Court, an initiative that has slim hopes of passage but reflects progressives’ impatience with President Biden’s cautious approach toward overhauling a court that turned to the right during the Trump administration.”

“There’s little chance the bill will make headway. Republicans are united in opposition to a plan that would undo the conservative majority on the Supreme Court, and even many Democrats critical of the court are reluctant to prejudge the issue while Mr. Biden’s commission is at work.”

Jonathan Bernstein: The Democratic push to expand the Supreme Court may backfire.

Speaker Nancy Pelosi said she has “no plans” to bring a Democratic-led bill to expand the Supreme Court to the House floor for a vote, The Hill reports.

Said Pelosi: “No. I support the president’s commission to study such a proposal, but frankly I’m not — right now, we’re back, our members, our committees are working. We’re putting together the infrastructure bill and the rest.”

“Unemployment claims declined to the lowest level since the coronavirus pandemic struck last spring, adding to signs the U.S. economic revival is picking up speed,” the Wall Street Journal reports.

“Several factors are converging to boost growth across the economy. Vaccination rates are powering consumer spending, governments are relaxing restrictions on businesses, and federal-stimulus funds are flowing through the economy.”

“President Joe Biden has resisted signing off on raising the Trump-era refugee cap because of political optics,” CNN reports.  “The President’s hesitation comes as the administration faces heat from Republicans and Democrats for its handling of an influx of migrants at the US-Mexico border. But the situation at the US southern border is separate from the refugee program, which dates back decades and has a thorough vetting process in place for refugees overseas to resettle in the US.”

The CDC has identified a small cohort of approximately 5,800 cases of Covid-19 infection among more than 66 million Americans who have completed a full course of vaccination, the Wall Street Journal reports.  These so-called breakthrough cases represent 0.008% of the fully vaccinated population.  The best way you can help your country right now is to get vaccinated as soon as possible.

“The United States is on track to have gathered an oversupply of hundreds of millions of coronavirus vaccine doses as soon as July, even while many countries in the developing world will have to wait years to vaccinate a majority of their populations,” the Washington Post reports.

“The estimates, included in the paper alongside recommendations, come as the Biden administration faces mounting pressure to facilitate equitable vaccine distribution around the world. The United States has pledged money to the global immunization effort, but has resisted calls to share vaccine technology or donate surplus doses.”

Bloomberg: Vaccine doses are piling up across the U.S. as some regions resist.

Associated Press: “With coronavirus shots now in the arms of nearly half of American adults, the parts of the U.S. that are excelling and those that are struggling with vaccinations are starting to look like the nation’s political map: deeply divided between red and blue states.”

“The emerging pattern: Americans in blue states that lean Democratic appear to be getting vaccinated at more robust rates, while those in red Republican states seem to be more hesitant.”

Politico: “Republicans are preparing a counteroffer to President Joe Biden’s infrastructure proposal, a plan that’s likely to be in the range of $600 to $800 billion, more targeted in scope and funded by unspecified user fees.”  However, Sen. Mitt Romney (R-UT), who is also involved in the conversations, said that the spending figure “seems a little high.”

If the “moderate” Republicans can’t even agree among themselves, they won’t be a factor in this bill.

“It’s just a ballpark figure. It doesn’t — it may not even be that much. I don’t know. I just kind of threw that out as a talking point.”

-Sen. Shelley Moore Capito (R-WV), quoted by Huffington Post, when asked about why her figure of $600 to $800 billion represented the “sweet spot” for her caucus on infrastructure spending.

Steven Benen looks over the list of the “G-10” senators that have approached Biden and Senate Democrats as potential legislative partners and notices one thing: they don’t have particularly moderate or compromise-oriented legislative histories.

“Indeed, that G-10 list reinforces the larger problem of why meaningful, bipartisan deal-making in the Senate is effectively impossible: if you were a member of the Senate Democratic leadership, and you had a choice between passing good bills and making each of these 10 conservative senators happy, you’d embrace the budget reconciliation process with both arms, too.”

President Biden still hasn’t spoken to House Minority Leader Kevin McCarthy since taking office “and it’s beginning to get under the skin of the usually affable California Republican,” The Hill reports.

Daily Beast: “As new details emerge about Rep. Matt Gaetz’s role in an alleged sex ring, The Daily Beast has obtained several documents showing that the suspected ringleader of the group, Joel Greenberg, made more than 150 Venmo payments to dozens of young women, and to a girl who was 17 at the time.”

Meanwhile, Politico reports Gaetz “announced a six-figure ad buy for a spot that targets CNN, as he fights to save his political career amid sexual trafficking allegations.”

Pelosi also said she calls him “Moscow Mitch” because she knows it gets under McConnell’s skin.

“A federal advisory panel declined Wednesday to vote on how Johnson & Johnson’s Covid-19 vaccine should be used, saying it needs more time to gather information on the risk of the shot following reports of cases of rare but severe blood clots that developed in a few recipients,” the Wall Street Journal reports.

George Packer: “If the purpose of the Afghan War was to prevent terrorists from using Afghanistan to stage attacks on the United States, America could have declared victory and gone home years ago. But if the purpose was also to help build a durable state—to prevent the Taliban from taking power again, destroying the hard-won progress made by millions of Afghan citizens, and perhaps allowing radical Islamists to regain a base on Afghan soil—then the longest war in U.S. history is ending in defeat.”

“President Joe Biden’s announcement that all American forces will be withdrawn by September 11—a neat two decades after the attacks that propelled the U.S. into Afghanistan—simply gives a date after which the clock on the demise of the Afghan government will begin to tick.”

Eliot Cohen: “This is, then, a humbling moment for the United States.”

The House Judiciary Committee voted 25 to 17 to advance a bill that would create a commission to study reparations for Black Americans who are the descendants of slaves, the Washington Post reports.  The bill has been introduced every year since 1989 but never made it out of committee.

“Sens. Joe Manchin (D-WV) and Kyrsten Sinema (D-AZ) are under lots of pressure from liberal activists and their Democratic colleagues to buckle on the filibuster, McConnell told Senate Republicans on Tuesday… That’s why the GOP should keep the moderate pair close and publicly praise them, the party leader explained, because they could ‘save this institution.’”

A Colorado geophysicist accused of beating up a cop at the Capitol riot will not be released before his trial because he allegedly attempted to flee to Switzerland, CNN reports.  “He traveled from his native Colorado to Boston and booked a flight to Switzerland, where he believed he would be protected from extradition… But he abandoned that plan after seeing law enforcement officers at the airport.”

“Instead, he rented a car and drove south. He later told investigators that while he was driving he threw his cell phone over a bridge near Boston because he thought he was being tracked.”

Republican lawmakers in Wisconsin hope to start to seize control of more than $3 billion in federal funds, but if they carry through with their plans they may have to give up as much as two-thirds of it, the Milwaukee Journal Sentinel reports.

“The proposal would provide property owners with a payment equivalent to 10% of their most recent property tax bill.”

“Whether their plan would be allowed under federal law is unclear. The nonpartisan Legislative Fiscal Bureau last week reported the measure may not be acceptable because federal law bars states from using federal funds to cover tax cuts.”

Associated Press: “The Wisconsin Supreme Court on Wednesday ruled that Gov. Tony Evers’ administration does not have the authority to issue capacity limits on bars, restaurants and other businesses without approval of the Legislature, a ruling that comes two weeks after the conservative-controlled court struck down the state’s mask mandate.”

“Facebook has repeatedly allowed world leaders and politicians to use its platform to deceive the public or harass opponents despite being alerted to evidence of the wrongdoing,” The Guardian reports.

“The Guardian has seen extensive internal documentation showing how Facebook handled more than 30 cases across 25 countries of politically manipulative behavior that was proactively detected by company staff.”

“Angered by being banned from various social media platforms for ceaselessly spreading conspiracy theories and disinformation about the 2020 presidential election, religious-right activist and MyPillow founder Mike Lindell decided to create his own social media platform, which he promised would be a bastion of free speech,” according to Right Wing Watch.

Said Lindell: “You’re not going to be able to swear. There will be four words for sure you can’t say: You can’t say the C-word, the N-word, the F-word, and you can’t use God’s name in vain.”

An announcement for the new platform is up. It launches on April 20.