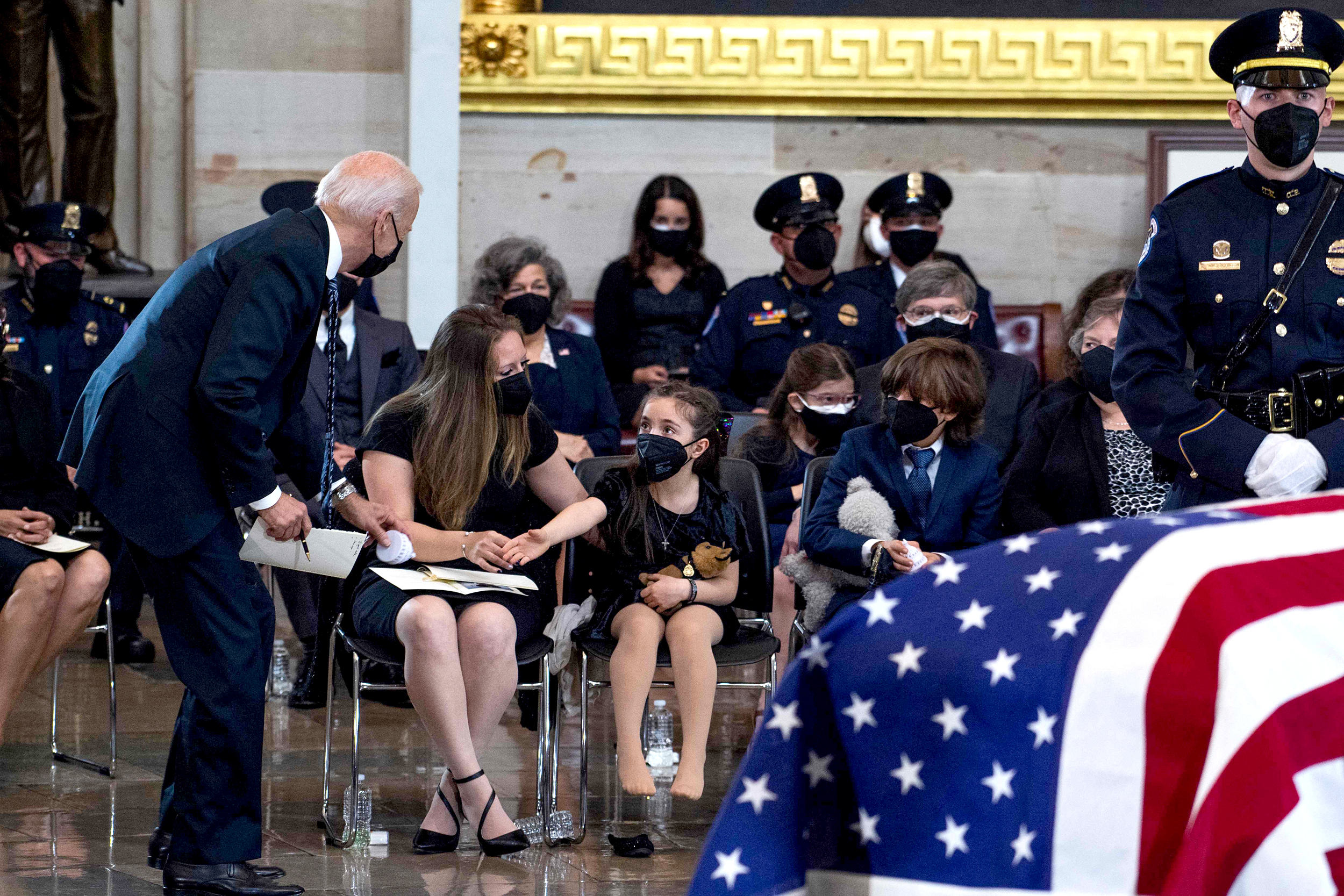 Playbook: “Speaker Nancy Pelosi formally invited Biden to address a joint session of Congress on April 28. It’ll be like a State of the Union address, but much smaller and socially distanced. An official involved in the planning said there would be a limit on the number of lawmakers allowed to attend to comply with coronavirus protocols. (Another person told us they believed that number could be as low as 200 rather than the typical 535 members of Congress, but those details are still being worked out.)”

“Lawmakers will also be barred from bringing guests. And the entire event will be designated as a ‘national special security event,’ meaning extra protection for everyone present.”

“Top White House officials will meet Wednesday with a bipartisan coalition of House lawmakers as the administration tries to enlist moderates to support the president’s infrastructure proposal,” Axios reports.

“The meeting is something of an olive branch after President Biden’s team courted groups of progressives to back the $2.2 trillion package.”

“President Biden and a bipartisan group of lawmakers discussed how to pay for his $2.3 trillion infrastructure package during a meeting at the White House Monday,” the Wall Street Journal reports. “During the roughly two-hour discussion, Republicans said they remain opposed to raising taxes on corporations and pushed for a narrower package. Mr. Biden showed an openness to breaking his proposal into smaller parts and considering different ways to pay for it, according to lawmakers who attended the meeting.”

Said Rep. Don Young (R-AK): “I think he’s receptive to anything within a degree.”

CNN: What to watch as Congress gears up for work on Biden’s infrastructure plan.

“Nearly every Democrat in New York’s House delegation said Tuesday that they won’t back tax hikes to fund President Joe Biden’s infrastructure package without a full repeal of the $10,000 cap on state and local tax deductions,” Politico reports.

“That powerful bloc, representing 17 out of 19 Democrats in the delegation, sent a letter to House leaders to outline their position on the issue, known as SALT, as negotiations intensified across Washington this week on Biden’s next major legislative priority.”

CNBC: “The Biden administration is not considering a hike to the federal gasoline tax as a way to help pay for its landmark infrastructure proposal.”

“The bill had looked initially unlikely to garner the 60 votes necessary to end debate and move to a final vote. But Republicans decided to not filibuster, in part because Senate Minority Leader Mitch McConnell, whose wife Elaine Chao is Taiwanese American, signaled openness to working on it with Democrats prior to final passage.”

Playbook: “Historically, Republicans generally haven’t supported hate crimes legislation. So what changed? Public pressure after the recent surge of violence against Asian Americans? More likely: Knowing that a showdown over the filibuster is likely looming, Republicans are loath to hand Democrats ammunition by blocking a bill that’s tough to oppose on its face. Better to hold off for a bill they really want to stop.”

“Rettig told the Senate Finance Committee that new sources of wealth have arisen since 2011-2013, when the last official annual tax gap estimate of $441 billion was made, including cryptocurrencies and the rising use of complex, foreign-source income.”

“A former local official in Florida indicted in the Justice Department investigation that is also focused on Rep. Matt Gaetz has been providing investigators with information since last year about an array of topics,” the New York Times reports.

“Joel Greenberg, a onetime county tax collector, disclosed to investigators that he and Mr. Gaetz had encounters with women who were given cash or gifts in exchange for sex.”

Key detail: “Mr. Greenberg began speaking with investigators once he realized that the government had overwhelming evidence against him and that his only path to leniency lay in cooperation.”

Rep. Matt Gaetz’s (R-FL) iPhone was seized when federal agents executed a search warrant last winter, Politico reports. I wonder if this is the same phone he was using to show nude photos of women on the House floor.

CNN: “The first thing some of the women were asked to do when they got to the house parties in the gated community in suburban Orlando was to put away their cellphones… The men inside, a who’s who of local Republican officials that often included Rep. Matt Gaetz, did not want the night’s activities documented.”

“The partygoers, at times dressed in formal wear from a political event they’d just left, mingled and shared drugs like cocaine and ecstasy. Some had sex.”

“Gaetz, the brash Republican, liked to discuss politics… He behaved like a ‘frat type of party boy,’ she said, sometimes taking pills she believed were recreational drugs.”

Politico: “While top Republicans acknowledged the serious nature of the allegations surrounding Gaetz, just one sitting GOP lawmaker has so far publicly called on him to resign: Rep. Adam Kinzinger of Illinois. Instead, Republican leaders on Tuesday were quick to defer to the ongoing Justice Department probe, noting that the Florida Republican would automatically lose his committee assignments if he were indicted.”

“The restraint from GOP leadership … suggests it’s unlikely that Gaetz will suffer any intra-party consequences until the investigation is complete.”

“The Capitol Police had clearer advance warnings about the Jan. 6 attack than were previously known, including the potential for violence in which ‘Congress itself is the target,’” the New York Times reports.

“But officers were instructed by their leaders not to use their most aggressive tactics to hold off the mob, according to a scathing new report by the agency’s internal investigator.”

“Members of the Oath Keepers paramilitary group likely stored weapons at a hotel in Arlington, Virginia, as part of their plan to have an armed rapid-response force during the January 6 insurrection,” CNN reports.

“The new details flesh out previous accusations from prosecutors that members of the Oath Keepers assembled a ‘quick reaction force,’ in Virginia that could deploy into the nation’s capital if needed.”

“Well, I’m pretty tough. I’m a street fighter. They would have had a battle on their hands.” — Speaker Nancy Pelosi, in an interview with USA Today, on the mob that stormed the Capitol on January 6 and wanted to kill her.

David Ignatius: “Biden sometimes comes across as a genial gaffer, pliable in the way of a career politician. But Tuesday’s announcement shows that he is also a stubborn and resolute man. Friends say he was bruised by the Afghanistan battles of a decade ago and took away some grudges. When convinced he’s right, he’s prepared to take big risks — as he has this week.”

“Can the CIA maintain a clandestine force in Afghanistan that’s strong enough to operate against al-Qaeda and other terrorist groups? Will drones be effective, if they must now be based in the Persian Gulf, with long flight times to Afghanistan and much shorter periods over potential target areas? We don’t know the answers. Biden is rolling the dice.”

“But there are some reasons to think corporate leaders are warming to Biden: They backed his Covid-19 recovery plan, which pumped billions of dollars into hard-hit industries and small businesses. They know he comes from a business-friendly state that boasts more corporations than any other. And, well, he’s not Donald Trump, whose trade wars hurt companies and whose incendiary remarks on race offended them.”

The Guardian: Republicans are in a messy divorce with big business. Democrats could benefit.

“Justice Stephen Breyer is 82 and Democrats are a single Senate seat away from ceding control back to Republicans. It’s a familiar and uncomfortable bind for a party that barely nudged former Justice Ruth Bader Ginsburg to retire the last time they controlled both the Senate and the White House — then watched the Supreme Court veer to the right.”

New York Times: “Armed with their internal data and conclusions, administration officials have begun to push back on warnings that a stimulus-fueled surge in consumer spending could revive a 1970s-style escalation in wages and prices that could cripple the economy in the years to come.”

“Yet they remain wary of the inflation threat and have devised the next wave of Mr. Biden’s spending plans, a $2.3 trillion infrastructure package, to dispense money gradually enough not to stoke further price increases right away. Administration officials also continue to check on real-time measures of prices across the economy, multiple times a day.”

CNN: “While Trump was in the White House, the intelligence community was forced to walk a political tightrope, calibrating its assessments — or sometimes withholding them altogether — to avoid the wrath of a mercurial president who was prone to bristling and ignoring politically inconvenient information. This was particularly true whenever the assessment related to Russian interference in US elections, a topic that officials learned to avoid raising with Trump.”

“In speaking to CNN, many of these same career intelligence officials said the difference is like night and day, describing what largely amounts to a much-appreciated return to business as usual during Biden’s first few months in office. White House officials are engaging with the substance of intelligence briefs, heeding assessments from experienced analysts and operators, and, at least for now, largely sticking by an early pledge to listen even when those assessments might contradict the White House’s political agenda.”

Adam Serwer on the recent wave of anti-trans legislation: “For the past 30 years, the GOP has pursued a consistent strategy: Find a misunderstood or marginalized group, convince voters that the members of that group pose an existential threat to society, and then ride to victory on the promise of using state power to crush them.”

What’s worse this time is that many of these bills specifically target children.

“Senate Republicans are nearing a decision on whether to embrace the return of earmarked spending that could smooth the passage of annual appropriations bills and the transportation portion of President Joe Biden’s $2.25 trillion infrastructure proposal,” Bloomberg reports.

“Momentum is building among Republicans for allowing each senator to choose whether to direct spending to projects in their home states.”

Said Richard Shelby (R-AL): “It’s a done deal. They are going to have them.”

“A trio of Republican lawmakers outlined legislation Tuesday aimed at ending Major League Baseball’s antitrust exemption after the All-Star Game was moved out of Georgia in protest of that state’s new voting restrictions,” NBC News reports.

“The legislative push from the three conservative senators — Ted Cruz of Texas, Mike Lee of Utah and Josh Hawley of Missouri — comes amid growing frustrations among Republicans over corporations and sports leagues embracing causes associated with progressives, such as protecting voting rights.”