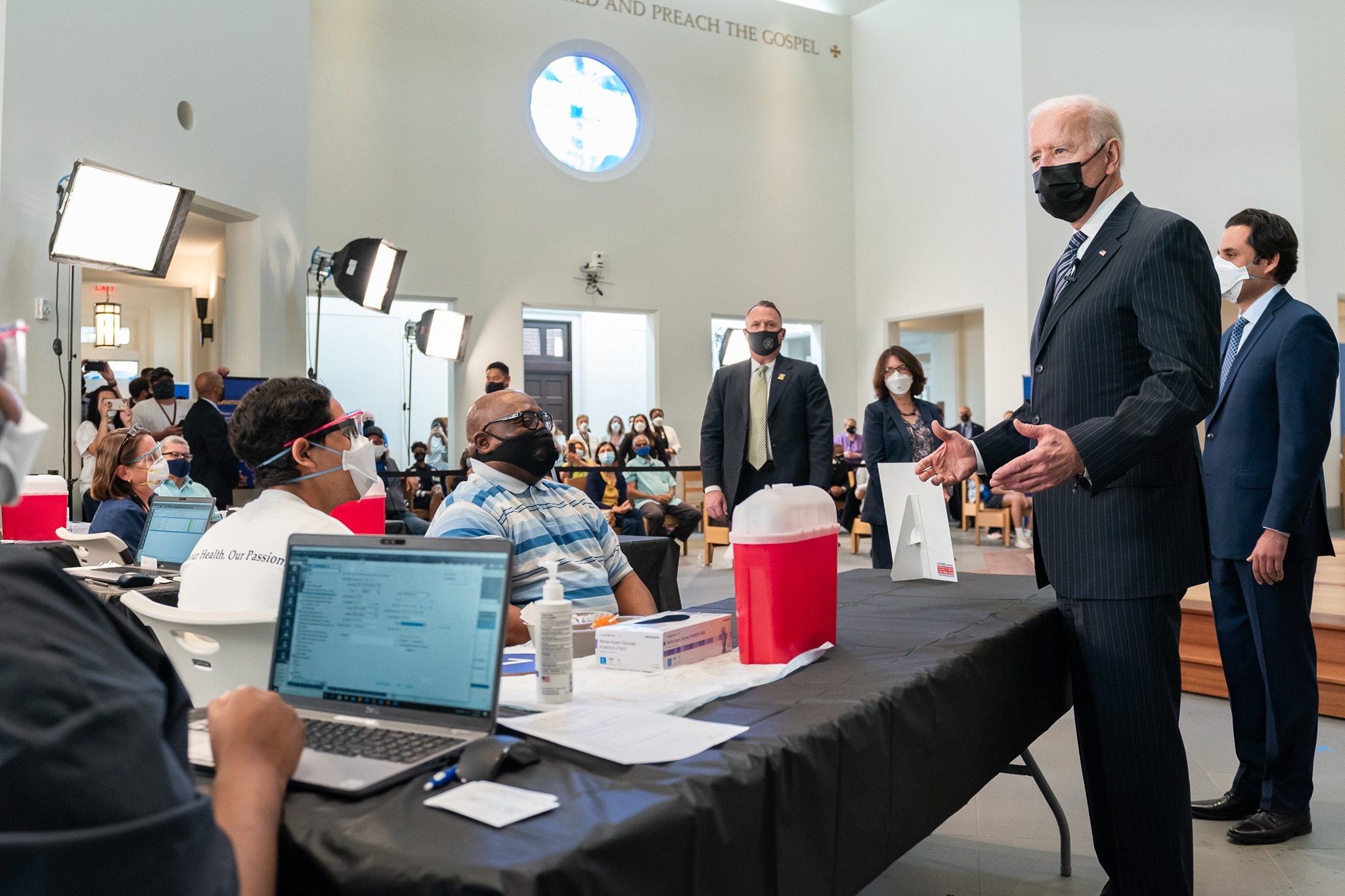 A new Monmouth poll finds that 21% of Americans claim they will never get the vaccine against the coronavirus if they can avoid it.  The recent news about Johnson & Johnson vaccine possibly causing blood clots is probably not going to help that situation. But partisanship is still the main distinguishing factor among those who want to avoid the vaccine altogether.

Here’s the party breakdown of those who say they will not get the vaccine:

Public health experts believe that roughly 70% to 80% of the population needs to be either vaccinated or have had the disease for herd immunity to take hold.  That suggests herd immunity might not be reached in heavily Republican areas — at least not without a lot of people getting sick and dying.  And even then it’s not clear that “natural immunity” is better than getting the vaccine.

1Q FUNDRAISING – The DCCC raked in $34.1 million in the first three months of 2021, posting its best first-quarter fundraising total for an off-year to date, The Hill reports. For comparison, the NRCC announced last week that it had pulled in $33.7 million in the first quarter.

Sen. Ted Cruz (R-TX) announced on Tuesday that he raised a massive $5,317,000 in the January-March first quarter of fundraising this year, Fox News reports.

NEW YORK 24TH CD — Public policy professor Dana Balter, who lost two straight campaigns to Republican Rep. John Katko in 2018 and 2020, says she won’t be back for a third try next year. However, Navy veteran Francis Conole, who lost last year’s Democratic nomination to Balter by a 63-37 margin, says he’s considering another campaign. Meanwhile, Roger Misso, another Navy veteran who also ran last cycle but dropped out a few months before the primary, says he “has no plans to seek office,” according to syracuse.com.

GEORGIA’S 6TH AND 7TH CDs — Army veteran Harold Earls, who recently became the first notable Republican to launch a challenge to Democratic Rep. Lucy McBath in Georgia’s 6th Congressional District, says he might change races depending on how redistricting turns out. According to the Atlanta Journal-Constitution, Earls says he might switch to the neighboring 7th District, represented by freshman Democratic Rep. Carolyn Bourdeaux, “if her district was made more friendly to the GOP.”

FLORIDA 20TH CD — Broward County Commissioner Dale Holness kicked off a campaign for Florida’s vacant 20th Congressional District on Monday with the backing of Alcee Hastings II, who’d been mentioned as a possible candidate for the seat that had been held by his late father. Holness joins state Sen. Perry Thurston and Broward County Commissioner Barbara Sharief among the notable Democrats running in the as-yet unscheduled special election to replace the elder Hastings, who died earlier this month at the age of 84.

Sharief had in fact filed paperwork to run in the 20th District back in December, months before Hastings died, but she hasn’t used that extra time to build up much of a donor base: In her first quarterly fundraising report, she brought in just $13,000 from individuals during the first three months of the year, though she also loaned her campaign another $100,000 on top of that.

Several other Democrats could run for this safely blue seat, including a few names we hadn’t heard before: state Rep. Bobby DuBose; Broward County School Board member Rosalind Osgood; and former Palm Beach County Commissioner Priscilla Taylor, who ran an aborted 2016 campaign for the 18th District.

VIRGINIA 2ND CD — Republican state Sen. Jen Kiggans announced Monday that she would challenge Democratic Rep. Elaine Luria, a fellow Navy veteran, in this competitive seat in the Hampton Roads area. Virginia’s 2nd District, which includes all of Virginia Beach as well as part of nearby Norfolk, swung from 49-45 Trump to 51-47 Biden; Luria won her second term that year by a larger 52-46 in her rematch with scandal-plagued former Rep. Scott Taylor.

Kiggans herself has also won on tough turf before. In 2019, she campaigned for an open GOP-held state Senate seat in Virginia Beach that had supported Hillary Clinton 47.1-46.9 before going for Democrat Ralph Northam by a wide 53-45 in the following year’s gubernatorial race. The GOP ended up losing both chambers of the legislature that evening, but Kiggans still prevailed 50.4-49.5 against Democratic Del. Cheryl Turpin.

NEBRASKA 2ND CD — Democrats are searching for a fresh challenger to third-term Rep. Don Bacon, who now sits in one of the bluest districts held by a Republican after two difficult campaigns in a row, and some names are starting to emerge.

Precious McKesson, who served as Joe Biden’s lone elector from Nebraska last year thanks to his 52-46 victory in the 2nd Congressional District, says she’s considering a bid; she’d be the first Black person to represent the state in the House. The Omaha World-Herald also reports that state Sen. Tony Vargas is looking at the race, though he did not respond to the paper’s queries. Vargas, who is of Peruvian descent, would be Nebraska’s first Latino representative.

A number of other potential candidates are saying “no,” however. Most notably, Hammel says that activist Kara Eastman, who lost bids against Bacon in both 2018 and 2020, won’t try a third time, though there’s no quote from her. State Sen. Megan Hunt, Douglas County Treasurer John Ewing Jr., Nebraska Public Service Commissioner Crystal Rhoades, and former NFL quarterback and sports broadcaster Sage Rosenfels won’t join the race either.

CALIFORNIA 39TH CD — Former Democratic Rep. Gil Cisneros, who had expressed some interest in a rematch after losing his first bid for re-election last fall, has been nominated by Joe Biden to run the Defense Department’s personnel office. If Cisneros, a veteran who served in the Navy at the rank of lieutenant commander, is confirmed by the Senate, that presumably would take him out of the running for another congressional campaign.

Following the Cisneros news, Rep. Ted Lieu endorsed the lone notable Democrat running against freshman Republican Rep. Young Kim, community college trustee Jay Chen. Lieu, who was one of the House managers of Donald Trump’s second impeachment, represents a Los Angeles-area district not far from California’s 39th, which is based in Orange County.

CALIFORNIA 45TH CD — Politico reports that Scott Baugh, the former chair of the Orange County Republican Party, is considering running for Congress somewhere, and it mentions Democratic Rep. Katie Porter as a possible foe for him. Porter is the only Democrat who represents a competitive Orange County seat under the current map, though things could change after California’s independent redistricting commission redraws the boundaries for 2022.

Baugh has coveted a seat in the House for some time, though his previous efforts haven’t worked out well. In 2016, Baugh began raising money for a bid in the 48th District, which was represented by Republican Rep. Dana Rohrabacher at the time.

He didn’t run that year, but did run in the primary against Rohrabacher in 2018. Baugh came very close to advancing to a general election against his former friend and locking Democrats out, but it was Democrat Harley Rouda who advanced instead.

Rouda went on to unseat Rohrabacher that fall, and Baugh soon began laying the groundwork for a second bid. However, while Baugh set up a new fundraising committee, he surprised observers by announcing he would stay out of the race. Fellow Republican Michelle Steel ended up beating Rouda in 2020, so it makes sense that Baugh is now setting his sights on a different Orange County district.

CALIFORNIA 25TH CD — Politico mentions former Virgin Galactic CEO George Whitesides as a possible Democratic opponent for Republican Rep. Mike Garcia, though there’s no word on his interest. The publication reported last cycle that Whitesides was thinking about entering the 2020 special election that Garcia ultimately won, but he never went forward with a bid.

David Frum: “You might assume that Georgia Republicans have absorbed such negative information, balanced it, and coldly calculated that the trade is worth it: They may lose some of their older, poorer, or sicker rural voters, but if they can thwart a larger number of Black or young voters, they will emerge ahead.”

“But in the Trump and post-Trump era, local Republican power holders have again and again demonstrated that they are not good risk assessors. They refuse to acknowledge awkward truths. They believe their own inflammatory propaganda. The result is that they make self-harming decisions based on inaccurate information.”